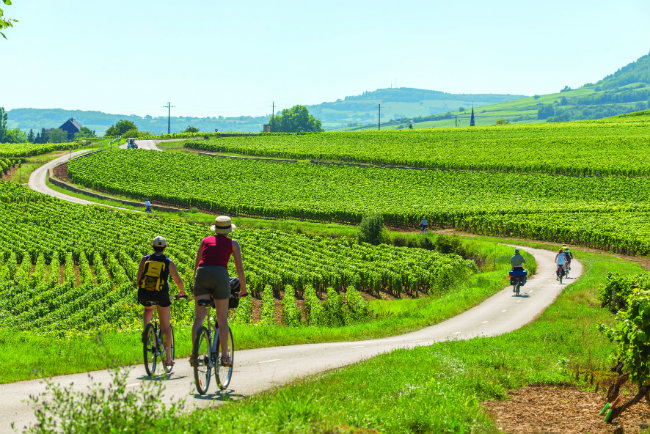 No doubt every corner of France has its own charms and beauty, but if one had to name the quintessential French region, it must be Burgundy. With medieval villages, ancient woodlands, fields of red poppy and grazing cattle, mosaics of stonewalled vineyards, and a château gracing seemingly every other hilltop, few places in France boast such a concentration of postcard-perfect scenery. And perhaps nowhere else are the roots of France’s renowned gastronomic and wine-making culture so prevalent. With a 2,000-year-old wine-making tradition, Burgundy’s wines are considered by many oenophiles to be simply the finest in the world. And with bountiful produce from rich farmlands to match its remarkable tipple, Burgundy is the birthplace of many of France’s most iconic dishes, from Coq au Vin and Escargots à la Bourguignonne to Boeuf Bourguignon.

Now, with UNESCO’s recent classification of the Burgundy wine region as a World Heritage Site, it’s no wonder that more and more oenophiles, foodies and Francophiles dream of travelling through Burgundy one day. For some, a trip to Burgundy might be a once in a lifetime pilgrimage, and they’re anxious to make every day count, to get off the beaten track and truly experience Burgundian art de vivre. But facing the logistical realities such a voyage entails can sometimes be an intimidating prospect, especially when one has just started scratching the surface of Burgundy’s wine culture. 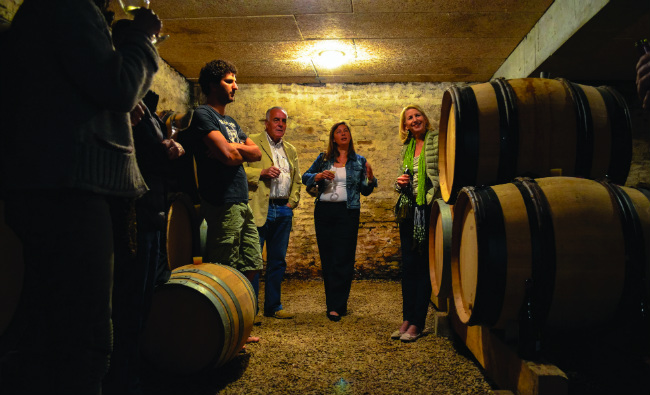 “In Burgundy, there are so many vineyards divided up between so many domains, that the whole thing is just impossibly complex to get your head around,” says Englishman Paul Thomas, who with his wife Jolanta has welcomed perplexed visitors from the world over as owners of Les Deux Chèvres, an 18th-century winery beautifully restored as a boutique hotel in the famed wine-making village of Gevrey-Chambertin. “People come and are wondering, ‘Which domain should we visit, and what wine should we buy?’ The choice is so vast that nobody really has a clue.” 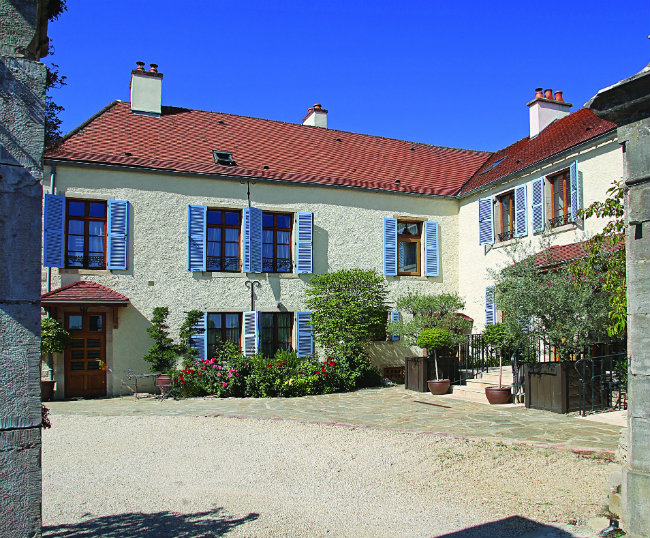 Fortunately, not only is Thomas (a knowledgeable advocate of eco-conscious, quality-minded biodynamic estates) himself a precious resource for visitors, but a growing number of companies are creating a whole new kind of tour today, intended for active Francophiles interested in discovering Burgundy’s landscape, gastronomy and wine in a deeper, more authentic way, by walking or cycling through the heart of the region.

Take Bourgogne Évasion, which offers up to week-long guided bike and wine tours, with days riding through Burgundy’s vineyards, rolling countryside and heritage sites between Dijon and Beaune, and evenings tasting wines and regional cuisine, while staying at a string of luxurious hotels. Or, for amateur cyclists avid for longer treks, Ride25 offers cycling holidays like their four-day, 354-mile Paris to Geneva ride, which includes two days’ cycling across the vineyards of Burgundy, with lunch stops in the towns of Chablis and Nuit-Saint-Georges. Authentica offers daily wine walking tours, such as their Discovery Vineyards and Heritage tour, where visitors walk in the footsteps of Burgundy’s Cistercian monks, strolling through the vines of the Côte de Nuits, visiting medieval houses, chapels, and the legendary Clos de Vougeot castle, and tasting grand Burgundy wines in a historic cellar. 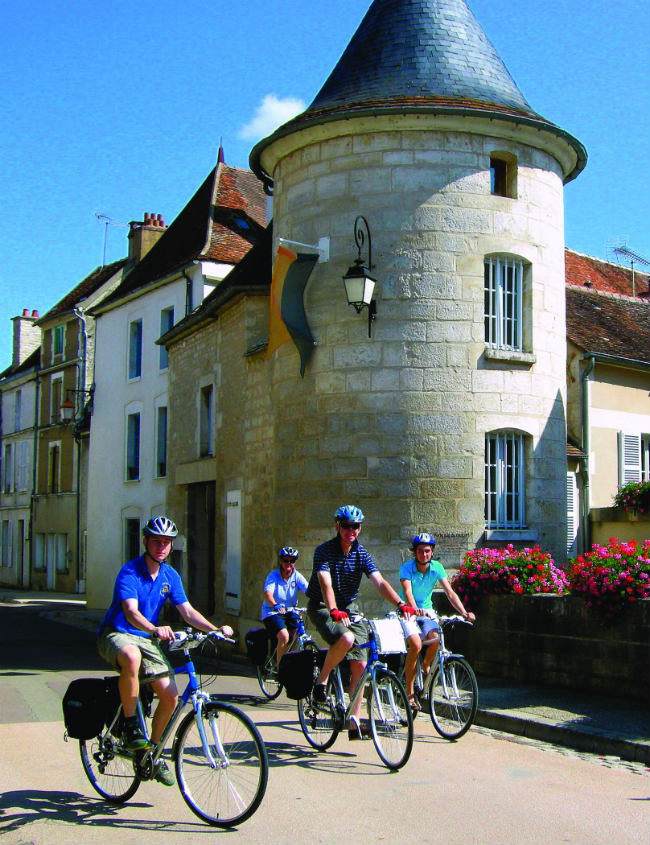 One of the oldest tour companies of its kind, UK’s Headwater Holidays, recently drew on their experience in organising hotel-to-hotel holidays to develop two new gastronomic Burgundy walking and cycling tours. “Our company was created to help people who were a bit nervous to even try a trip like this,” says Tina James, Headwater’s managing director. “For people who are in many respects cash rich and time poor, to plan something like this themselves is difficult – indeed, our researchers will often spend three months planning out routes like these.” It certainly shows.

Headwater’s Burgundy seven-day tours plunge deep into the region, running along canal towpaths, old railroad lines, ancient forest paths, and lanes meandering right through Grand Cru vineyards, with nights spent at enchanting hotels offering luxurious repose and further immersion into the culture. As the tours are self-guided, Headwater equips you with maps including precise directions and descriptions of the terrain for walkers and elevation for cyclists. And, of course, there’s the added security of being followed by a local tour representative, who not only shuttles baggage ahead to hotels throughout the trip, but is always a phone call away in the event a traveller would rather soak their legs in a bath than tackle another hill. 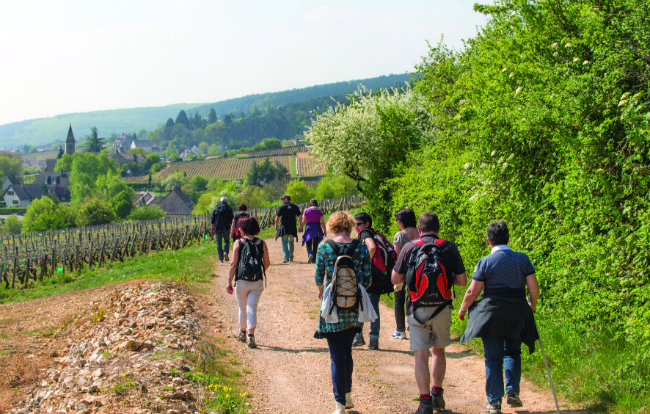 But more than just relieving logistical headaches, the promise of tours like Headwater’s is that they can provide something even more essential to a successful trip – the possibility, thanks to careful reconnaissance and on-site advising, to bypass the tourist traps and tap directly into a more authentic experience of the region.

“These trips are off the main route, it gives you the chance to get in with the locals, because you walk [or ride] straight through the villages,” says Lin Towe, one of the Headwater reps in Burgundy. “You happen upon these little village shops, like the fabulous chocolate maker in Pommard, or little bars like the one in Morey-Saint-Denis where you find the locals sipping their pastis. You walk by these small wineries, which are wide open to the world, you can see them pressing the grapes. If you want to do a tasting, you can often just walk in the door.” And for this journalist, having tried walking and cycling with Headwater, it was the unexpected doors that the tours opened that led to our most memorable experiences. 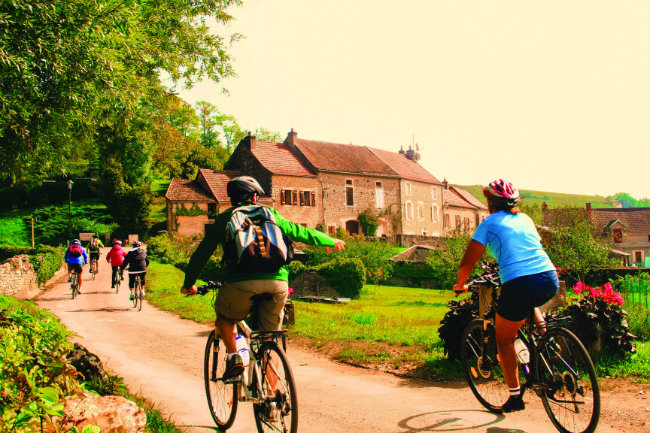 After a day of legging it across Burgundy, there is a distinct delight in coming around a corner in the sleepy wine village of Chambolle-Musigny and passing through a gate to find oneself standing before the Château du Petit Musigny, a stunning 18th-century château transformed into a lavish hotel. To then learn that an evening wine tasting will be held in ancient Cistercian wine cellars underneath the hotel – the château was apparently built on the ruins of an abbey – one begins to seriously consider expatriating. The tasting, which we expect will just be a pleasant excuse to indulge in a glass before dinner, proves to be a fabulous primer into Burgundy wine culture.

Over the course of several different wines (and several gougères – Burgundy’s divine cheese puff pastries), Gabrielle Jung, Château du Petit Musigny’s head of oenotourism, equips guests with the tools to start navigating Burgundy’s complex wine classification system, beginning with the fundamental notion of les climats. It was Burgundy’s climats which UNESCO specifically granted World Heritage status in 2015, referring to the 1,247 tiny vineyard plots – demarcated by Cistercian monks at least as early as the 12th century – that make up the Côte de Beaune and the Côte de Nuits wine regions.

“The word climat can even be difficult for French people to understand, because le climate basically means ‘the weather’,” Jung explains. “But when you speak about le climat and wine in Burgundy, it’s the equivalent of terroir, the idea that the wine will be different depending on what kind of soil the grapes come from. Each climat represents different geological and climatological conditions – the soil, the slope, the way the wind blows, the exposure to the sun.” 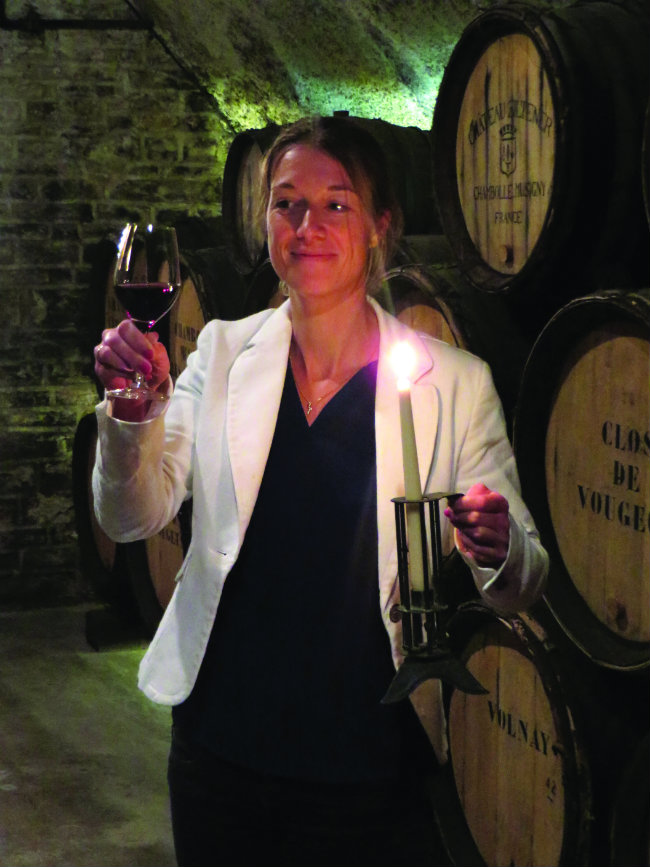 Jung shows how understanding les climats helps to decipher the convoluted labels of Burgundy wines, serving us a sample of Chambolle-Musigny Les Feusselottes 1er cru. The name is quite a mouthful for a wine that reveals itself to be exceedingly elegant, floral and silky, but ‘Chambolle-Musigny’ simply refers to the village where it’s made, and ‘Les Feusselottes’ to the premier cru-ranked vineyard where the grapes were grown. The same rule allows one to decipher the labels of less prestigious Crus Communaux, or village wines, that very often include the name of an individual vineyard after the village, as in ‘Gevrey-Chambertin Les Evocelles’.

As for Burgundy’s greatest wines, the Grand Crus, each is named solely after the grand cru vineyard where it originates. Passing through the sea of sun-drenched vines four kilometres south of Chambolle-Musigny, there’s little to indicate that one is on the wine world’s most hallowed ground – save a weathered stone cross, and a marking stone inscribed with the words ‘Romanée-Conti’ – only a 1.81-hectare vineyard on the slopes of the Côte de Nuits which gives birth to the world’s most expensive wine, one which inspired the author Roald Dahl to once write, “To drink Romanée-Conti is equivalent to experiencing an orgasm at once in the mouth and in the nose.” 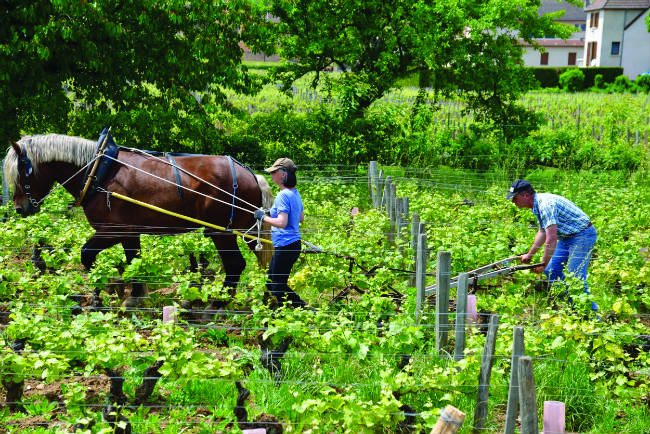 To do justice to wine this good, once might naturally feel obliged to splurge on Michelin-starred cuisine, and Headwater’s tours do include an evening at the gastronomic restaurant Jardins des Remparts in Beaune. But the reputation of Burgundy’s gastronomy is upheld by chefs in even the most unexpected places. The countryside restaurant Le Péché Mignon (Tel: +33 (0)3 80 42 04 19) is lost amidst the cornfields outside of Nuit-Saint-Georges, the décor is less than inspiring, but after tasting their oeuf en meurette variation with a poached egg in a flavoursome crème of Aligoté wine and wild mushrooms, or the elegantly plated Burgundy river trout with its kaleidoscope of local vegetables, one isn’t at all surprised to learn that the chef, Dominique Fieux, once held a Michelin star himself in a former restaurant.

Fieux doesn’t chase stars any more, describing himself today as a humble servant to the terroir he celebrates – Burgundy and its truffles, cèpes and girolles, its freshwater fish, Charolaise beef, Bresse chicken, its Dijon mustard and spice cake, blackcurrant liqueur, and above all, its wines. “As chefs, we try to create dishes that are worthy of the wines of Burgundy,” he says. “Burgundy cuisine exists to sublimate a product that is already exceptional, it’s a cuisine au service des vins.”

To meet such passionate individuals, and enjoy such meals with the appetite of one who spent a day travelling the countryside, certainly that’s the recipe for a perfect holiday. The English writer Jerome K Jerome would doubtless have agreed. As he wrote in his 1889 Three Men in a Boat, a humorous account of a two-week boating and eating holiday on the River Thames, “The odour of Burgundy, and the smell of French sauces, and the sight of clean napkins and long loaves, knocked as a very welcome visitor at the door of our inner man.” 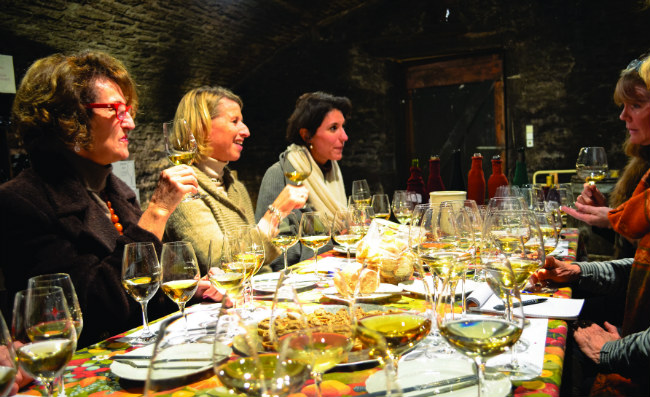 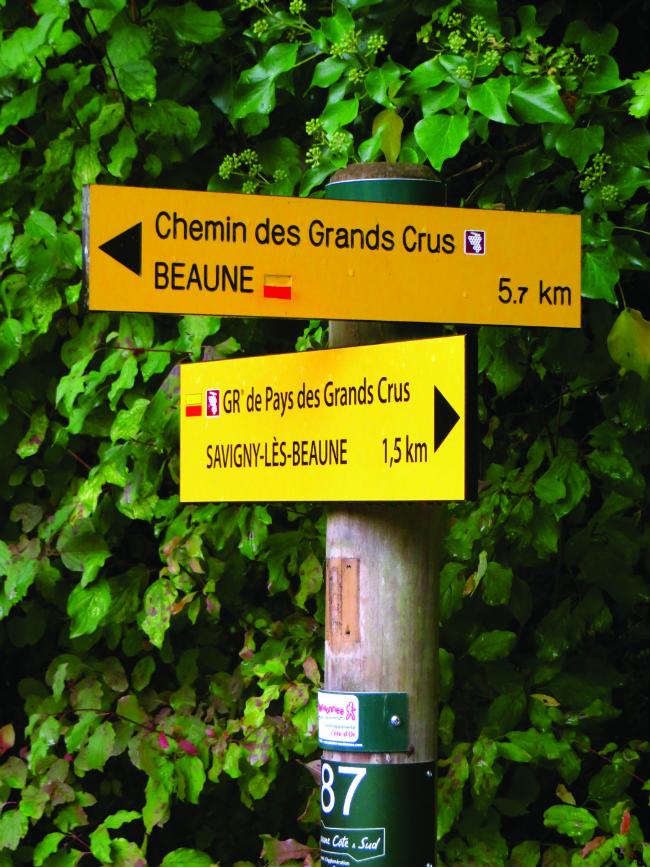