5 Surprising Things in a French Kitchen 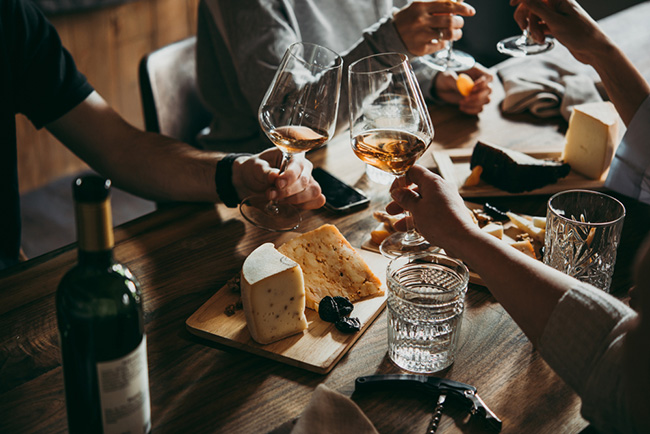 France’s culinary excellence is renowned, and I can relate as the head chef at Pastreez! Recently, I shared all my secret tips and the macaron recipe that I use to create authentic French macarons. I got lots of questions about the tools I was using in the recipe so I decided to give an insight into the unexpected things you might find in a French kitchen, some of which I use to make my delicious macarons.

Why not dip your Nutella tartine in some milk? © Shutterstock

The first one is pretty obvious: Nutella.

Nutella is a chocolate spread made from hazelnuts and is very popular in France. French people consume around 75,000 tonnes of Nutella per year, that’s a quarter of all the pots produced worldwide. It’s safe to say that Nutella in France is the same as peanut butter in the United States: a staple.

One of the most popular ways to enjoy Nutella is for breakfast. The idea is to toast bread, spread Nutella on it, and dip it into milk, either cold or hot.

Did you know Nutella is actually Italian? It was invented back in 1946, right after the Second World War. At this time, cocoa was very hard to find due to global shortage. Ferrero saw an opportunity to create a spread made with a small amount of cocoa, but a lot of sugar and hazelnut. Nutella was born!

Nutella is great to add to almost every dessert. In France, I would say the most typical Nutella dessert is a banana Nutella crêpe — miam.

But you’d be surprised where you can find the hazelnut spread. Nutella actually features on our macaron flavours list, we did some delicious seasonal flavours that really bring out its sweet, nutty taste.

Camembert is arguably the most famous French cheese. Originally from Normandy, camembert was first made in 1791 and is closely related to brie. In fact, according to local legend, Marie Harel, inventor of the camembert, took inspiration from Brie — a priest gave her advice about how to make her own at home and thus Camembert was born.

In France, like most things, camembert is usually eaten with baguette. It is the typical cheese you’ll find served for apéritif with friends and family around 6pm. This apéritif is usually composed of camembert, baguette, charcuterie, and wine.

My favourite way to eat camembert is when cooking. I often cover chicken breasts with baked camembert and avocado for a simple yet tasty meal. Whatever dish you use it in, camembert has its own signature taste that will always give a French twist.

A silicone baking mat is a must for French people. I’d say most have one in their kitchen in France. We love baking in France! And I am not an exception to the rule as the French chef who founded Pastreez.

Do you know what macarons are? They are a French dessert formed using two shells with a filling in between.

My wife and I left everything in Paris to build our online macaron bakery in the US and we exclusively use these mats a lot in our kitchen.

The good thing about silicone mats is that they can be used for a variety of pastries. Macarons, of course, but also financiers, shortbread, cookies, sablés bretons and more. Compared to parchment paper, it is reusable, does not stick, and some mats even have shapes drawn on them to help you with forming the dough to achieve the desired effect.

Baguette is a staple in French kitchens © Bas Peperzak

The cliché is true. Yes, French people eat bread for every meal! It’s a key part of our culture.

A traditional French baguette is approximately 2 feet long and weighs about 250g. The story goes that Napoléon‘s bakers invented this stretched version of bread, to be easier to transport on the field by its soldiers.

Another legend says that the French baguette was invented at the end of the 1800s by an engineer named Flugence Bienvenüe, who was in charge of building the Parisian metro. The workers building the metro were fighting every day and as the bread they were eating was round, they had to have a knife on them to cut it, which made the fights much more dangerous. Bienvenüe had the idea to ask a baker to stretch the bread to make it easier to cut and break, without a knife. Voilà!

Now, most French people need at least one or two baguettes a week (or a day!). We use it for almost everything. Breakfast is jam and tartines, we tear off bits for lunch and dinner to accompany a meal, grab some as a quick snack…

A baguette has very simple ingredients: wheat flour, water, yeast or sourdough, and salt. While these seem pretty common, the secret is in the technique and process.

Just like macarons, getting the right texture and balance for baguettes is key. Doing so requires experience and savoir-faire.

Baguettes come in a variety of flavours, tastes, colours, and styles. It’s hard to try them all!

Last but not least: Moutarde de Dijon, or Dijon mustard.

In 1742, Jean Naijeron, a native of Dijon, modified the classic ingredients that were used in moutarde at the time. He replaced vinegar with verjuice (from grapes) because vines grew near where he lived. That change was key to getting a sour taste and so Moutarde de Dijon was born.

In France, we use Dijon mustard in salads and also to accompany certain dishes, especially meat. Dijon mustard is actually very good for you. Scientific studies show it helps to strengthen bones and it also contains antioxidants that help to improve sight and is a great source of vitamin K.

I hope you enjoyed my overview of some surprising items you’ll find in a French kitchen. If you never tried a macaron before, I strongly recommend our macaron of the month club, which allows you to try seasonal macarons for 3, 6, or 12 months.

Lead photo credit : Take the time to have a meal ensemble © Shutterstock