10 of the best French food holidays 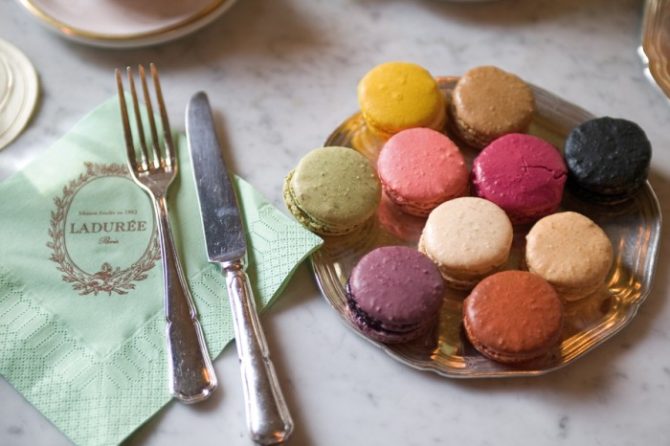 Fancy a French food holiday? France Today delves into France’s culture of food and drink to serve up fantastic break ideas with a focus on flavour.

If you structure a holiday around a food festival or regional product in France, not only will you discover a new region, you’ll also be privy to a whole world of French gastronomic culture which is normally reserved only for the locals.

Take a bite from an enormous tarte aux fraises baked at Beaulieu-sur-Dordogne’s Fête de la Fraise (Strawberry Festival) each May; slurp oysters in the Gironde at various celebrations over the summer; rootle for truffles in Vaucluse when the season opens in November; or nibble on samples of Paris’s finest chocolate at the Salon du Chocolat, which takes place at the end of every October.

France’s fantastic diversity and prestigious quality of wine production still ranks it at the top of the world oenology scene. Whether you’re a bit of a wine expert or you simply enjoy a glass or two, wine tours and tastings are so prevalent in France that they’re just about impossible to resist.

The wide range of specialist tours on offer include vineyard trips by miniature train in Champagne; hiring a Citroën 2CV to drive around the top wine spots in Beaujolais; cycling wine tours which take in the caves à vin of Alsace; and sommelier-led, sit-down gourmet dinners, which are accompanied by the most highly-recommended tipples.

At times, we all crave something a little stronger. Again, France is more than capable of quenching your thirst as this is the birthplace of such classic liqueurs as Cognac and Cointreau, Armagnac and absinthe.

Tasting tours, which reveal the distillation secrets of some of France’s eldest and most prestigious elixirs, are available for each ambrosia. Know your digestifs from your apéritifs? What fruits distil into which liqueurs? Become a connoisseur on your next holiday to France.

4. A TASTE OF THE FRENCH SEASIDE

As it’s blessed with over 2,000 miles of coastline that’s as extensive and varied as an à la carte menu, France is unbeatable for beach holidays. Whether you’re having an old-school knees-up to sea shanties at one of Brittany’s maritime festivals or donning your glad rags for a sophisticated seaside dinner in Cannes or Biarritz, France’s seafood enriches any coastal holiday.

For a really local experience, head to Calvados for its scallop festival, Le Goût du Large, held each November in Port-en-Bessin-Huppain, then stock up on the market’s cheapest scallops and join in a cookery class.

If France is an international gastronomic centre, then its capital is foodie paradise. Paris is blessed with top-qualityboulangeries, fromageries and wine shops, seemingly on every street corner, plus some of the world’s top gourmet restaurants, which share postcodes with authentic, down-to-earth bistros.

The scope of choice can virtually instil a sense of panic in a food-mad visitor who’s eager to sample everything available. A great way to ensure that you’ve spent your time wisely is to go on a food tour, which will single out not-to-miss restaurants, food markets and legendary addresses in Paris’s culinary history.

Although eating out will feature highly on your holiday itinerary, cooking a simple yet delicious meal with the freshest vegetables, the ripest fruits and locally reared meats is one of the joys of French living.

Some markets deserve a special mention: if in Lyon, don’t miss Les Halles Paul Bocuse, which is regularly frequented by Michelin-starred chefs and arguably sells the country’s finest produce, and Cannes’s Marche Forville is another chefs’ favourite. For a more laid-back experience, head for Sarlat’s Saturday market, where truffles and goose and duck pâtés invariably feature, and for something entirely more fragrant, try the flower market held each Friday morning in Béziers.

Make like Julia Child and pick up the art of French cooking on your next holiday. You might be looking for an intensive course to elevate your skills – think Le Cordon Bleu in Paris – but you’re more likely looking for a way to combine a relaxing stay in France with some laid-back cooking classes.

Many chambre d’hôtes offer food-focused stays, during which you’ll visit a market in the morning and rustle up lunch with the resident chef, before spending the afternoon by the pool or wandering in the local village while thecuisinier prepares a gourmet dinner.

France’s culinary prowess is rooted in a tradition of high-quality ingredients, ones which with even the most simplest preparation, are transformed into world class delicacies. That said, if ever there’s a place to splash out on the meal of a lifetime, it’s France. With 26 restaurants holding three Michelin stars, French haute cuisine is the world’s finest.

Alain Ducasse’s flagship restaurant in Paris, at the Hôtel Plaza Athénée, is now – somewhat controversially – one of the world’s greatest vegetarian restaurants since it banished meat from the menu. Further south, Paul Bocuse’s Auberge du Pont de Collonges continues to draw visitors from all over the world, thanks to its unfalteringly classic French approach.

President Charles de Gaulle famously asked, in exasperation, “How can you govern a country which has 246 varieties of cheese?” However, there are actually closer to 400 types of fromage in France, which perhaps illustrates the French icon’s point more than ever. Yet visiting cheese fans couldn’t be happier with such variety.

Although some French cheese is so pungent that it’s actually forbidden on public transport (Époisses de Bourgogne, we’re looking at you) it’s still well worth a taste – sometimes the smelliest of cheeses are surprisingly mild. Many fromagers are open to the public – in Meaux, you can visit the manufacturers of one of France’s most beloved dairy exports, Brie. Just a short drive out of Paris, it’s great for a day trip.

You can’t truly experience Brittany without enjoying a few crêpes and buckwheat galettes. Likewise, Normandy just isn’t Norman without a creamy bowl of moules marinières washed down with a glass of crisp vin blanc. Marseille means bouillabaisse, its ubiquitous Mediterranean fish stew, and Toulouse is the home of cassoulet, a sausage and bean casserole that’s the ultimate in comfort food.

Each French département is characterised by its local fare, so be sure to sample spécialités du terroir wherever you are. The restaurateurs will love you for it, and you may discover your new favourite dish.