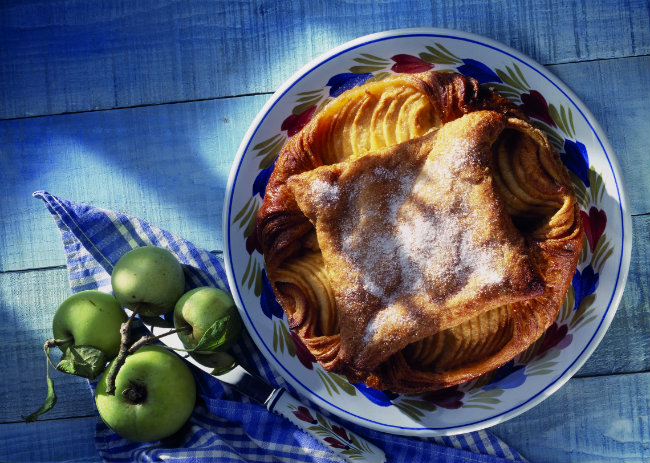 First things first, repeat after us: queen-yah-man. It is a bit of a mouthful, as is the butter-laden pastry behind the fanciful moniker. While it doesn’t roll off the tongue, kouign-amann has certainly set one or two wagging over the decades.

Like most desserts, its creation is shrouded in legend, and oodles of gossip. Some put the chance invention down to a botch job by Douarnenez boulanger Yves-René Scordia, circa 1860. Other lingering tales would have us believe the happy accident was brought on by a flour shortage. Faced with crowds of customers clamouring for their daily bread, Monsieur Scordia was forced to improvise with what he had: lumps and lumps of butter.

The calorie-smashing recipe requires a stomach-churning 300g of butter and sugar respectively, whisked with just 400g of flour. Dearth of flour or not, it seems we have a spur-of-the-moment butter frenzy to thank (or blame) for the birth of the rich pastry. What we know for a fact, however, is that it derives its name from the Breton for cake “kouign” and butter “amann.”

For centuries, the moreish cake was the hallmark of the small town of Douarnenez and rarely found outside the Finistère département, let alone Brittany. It’s not until the early noughties that the Breton staple made its way to the capital, where a coterie of master-bakers set out to ‘elevate’ the humble cake. Among them, Pierre Hermé – of macarons fame– wasted no time in tweaking the basic recipe, which he deemed “étouffe chrétien” (so heavy it would choke a Catholic), by easing up on the butter content. The likes of New York and California followed suit. In 2015, a San Francisco bakery even declared June 20 National Kouign-amann Day. Over the years, Douarnenez-born boulangers have made short shrift of these newfangled kouign-amanns – more akin to caramelised croissants than pukka Finistère viennoiseries.

The Breton speciality’s fiercest custodian, Thierry Lucas, went as far as dismissing Paris’s bastardised kouign as “the love child of a croissant and brioche.” Ouch. That being said, many experts argue the viennoiseries are (but distant) cousins. After all, both are made from laminated dough, a labour-intensive process that involves layering the pastry with sheets of butter. But the artery-clogging kouign boasts additional handfuls of sugar heaped liberally between each layer, creating pockets of sweetness in the dough’s soft, moist centre, and a crispy coating on the burnished exterior.

To put paid to bogus claims of authenticity from wily bakers, in 2002 the Chambre de Métiers et de l’Artisanat de Bretagne launched a kouign-amann competition, which sees around 60 contenders vie for the crown each year – and acts as a nifty quality control exercise. But there’s a catch: champions cannot defend their title for two years after nabbing first prize.

To sample the real thing, there are no two ways about it: head down to its birthplace in Finistère. On the hefty side, it is no guilt-free indulgence, but when in Rome…If a plain kouign does not tickle your fancy, why not plump for the light(er) apple variety and sneak in one of your five a day?