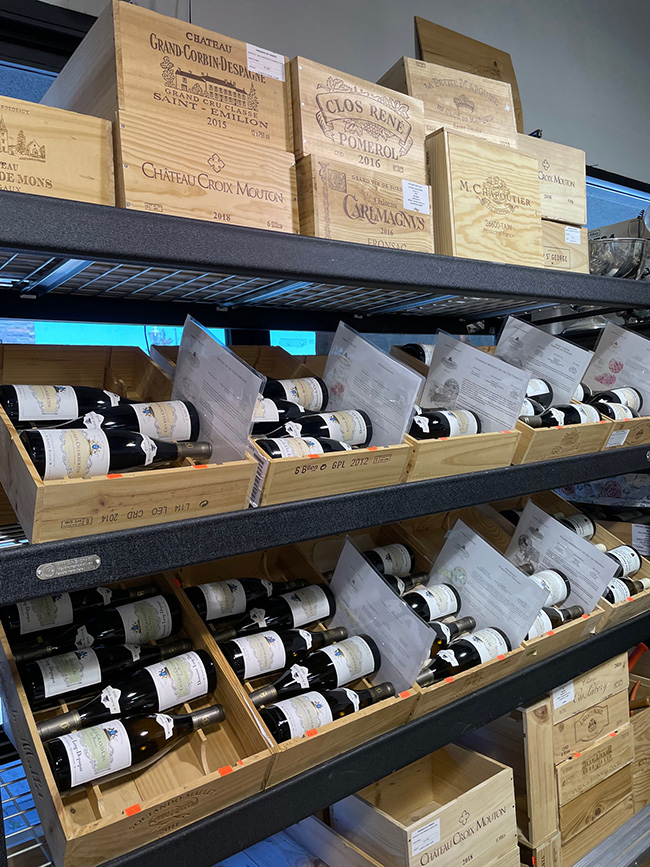 Friends invited us to a “cheese party” when we were visiting Paris and that’s really what it was – a party serving French cheeses paired with French wines to compliment the flavours of each. But it was also a party of surprises.

First, just cheese was served. There were also bread, nuts and dried fruit, but my expectation that there would be other courses was wrong. Just fromage. Second, I was reminded of France’s long history regarding cheese and gained a higher respect for its elegant fromage. Third, I learned a lot about the flavour combinations and was inspired to recreate a French cheese party in the San Francisco Bay Area.

This became my challenge and I did it only with the help of my French friends, Sylvie and Jean-Pierre. They were kind enough to hold another cheese party and provide a written course list of the cheese and wine pairings. Sylvie also included US options in case the French versions were hard to find. There are over 1000 kinds of French cheeses and 2,900-plus French wines, so this was a small selection but a delightful one that featured historic cheeses along with newer ones.

What kinds of cheeses should you serve?

Here are the courses suggested by Jean-Pierre and Sylvie:

1. Soft cheese with a bloomy crust – fromage a pâte molle et croute fleurie
French cheeses are Coulommiers and Brillat-Saverin. If you can’t find them, try Brie de Meaux or Camembert. The paired French wine is a dry white that is not very aromatic, such as a Bourgogne aligoté. US version could be a petit Chablis.

2. Soft cheese with a washed rind – fromage a pâte molle et croute lavée
The French cheese choices are Maroilles and Livarot; or Epoisses, Munster, Point l’Évêque or Reblochon which are easier to find in the US. The wine pairing is a dry red such as a grand cru de Bourgogne or a less expensive Burgundy wine. It can also be a soft white Riesling from the Alsace or the Loire regions.

3. Blue cheese – fromage a pâte persillée
Roquefort is the French classic along with Fourme d’Ambert but a Bleu de Gex or Bleu d’Auvergne works. The wine pairing was a surprise – a sweet white wine such as Jurançon moelleux (soft) or Maury, Rivesaltes, Banyuls or white Port.

4. Uncooked pressed cheese – fromage a pâte presse non cuite
The two French cheeses are Saint-Nectaire and Salers Affiné. Ones found more often in the US are Reblochon, Mimolette and Cantal. The wine changes to a structured red such as a Gigondas, Madiran or Le Saint Joseph with a Beaujolais taste but a dry white Côte du Rhône also works.

5. Cooked, pressed cheese – fromage a pâte presse cuite
The French list is Comté or Beaufort. The US list is a Gruyère, Emmental or Tome de Savoie. The wine is a dry white such as a Côte du Jura but a dry, white burgundy or chardonnay will work.

Recreating the French experience in California

The challenge was finding the French cheeses and wines but there are several places to obtain them in the San Francisco Bay Area and luckily throughout the US too. I started with The Gourmet Corner in San Mateo where I met the owner, Hugues de Vernon. Although he had received a shipment of French cheeses two weeks ago, he had a much smaller selection when I arrived. “Cheeses are very popular and go quickly,” he said. I left with about half the cheeses I needed and most of the wines so I ordered other cheeses online from La Fromagerie which delivered the next day. I also bought two of the cheeses from my local Safeway – the President Comté with an affinage (ripening) of six months and Société Roquefort (which makes about 60% of France’s Roquefort) which is matured in the natural caves of Mont Combalou in Roquefort-sur-Soulzon.

One major problem was finding a sweet white wine from the Jura region of France to go with the blue cheeses. I found an expensive Jurançon moelleux at K&L wines, but I chose a white port, which was on Sylvie’s list of US wines for this course, from Total Wine & More. Locating a reasonably priced white Côte du Jura for the fifth course was also not easy, but I ended up finding a white Burgundy at BevMo. Sometimes even the wine store chains will get you there.

I was ready for the cheese party with a group of friends familiar with French foods. (It was Covid safe – outside initially and then inside with lots of windows open.) My cheese history information which I shared before each tasting was from French Cheeses published by Dorling Kindersley, a resource I’ve used for years. Baskets of white and wheat bread plus crackers and nuts were on the table, along with grapes, for everyone to share.

Course #1 was Brillat-Savarin and Petit Camembert au Calvados cheeses paired with a 2020 white Bourgogne Aligoté. Brillat-Savarin is a newer cheese created in the 1930s and named after a renowned 18th-century French food writer. The affinage is one or two weeks. Camembert is evidently the most copied cheese in the world and is easily found in many US supermarkets. But look out – it should be firm with a creamy yellow paté. The reaction: the Brillat-Savarin was “tart and great with wine,” said Kim, who also said it would be a great breakfast cheese. Susan was impressed with the firmness of the Camembert, so thank you Le Fromagerie for the real thing.

Course #2 was Epoisses and Point-l’Évêque cheeses paired with a 2019 red Beaune Les Sceaux premier cru. Epoisses is said to be Napoleon’s favourite cheese but production did not survive World War II. It was revised in 1956 in the village of Epoisses in the Burgandy area. It’s a strong-smelling cheese (some say stinky) with a fine texture. Point-l’Évêque is one of the world’s ancient cheeses and is creamy and fine-textured. The reaction: “The Epoisses is my favourite,” said Jack. “It’s not as harsh as I was led to expect.” Susan said, “The Epoisses and the wine are great together. I can’t taste the other cheese (in this course) after this one.”

Course #3 was Roquefort and Blue d’Auvergne paired with a white Valdouro Porto from Portugal. I did find a Jurançon moelleux but it was quite expensive and this was the only white port I could find from my sources. Roquefort is said to date back to the days of Pliny in ancient Rome who wrote about the French cheese in his book in AD 79. Ripened in natural caves, it was also the first cheese to obtain a French AOC (appellation d’origine contrôlée) status in 1925. The Blue d’Auvergne has a paté that is sticky and crumbly with a tart taste. The reaction: “I never eat blue cheese, but this is great paired with the sweet wine,” said Jack. “I guess I’ve only had it in salads with tart dressings that mess up the flavour.” Sally said,” This is the best blue cheese on the planet,” (referring to the Blue d’Auvergne.) “The creamy, tartness works so well with the sweet port.” I thought the white port was too sweet since I tasted the Jurançon moelleux with blue cheese at Jean-Pierre and Sylvie’s party. Next time I’ll splurge on the expensive bottle.

Course #4 was Saint-Nectaire paired with a 2018 red Gigondas. Louis XIV enjoyed the cheese often at his table. It has a complex taste and the paté is a bit heavy and resistant to the bite. Still, Kim’s reaction was, “This is cheese ice cream although it needs a bigger wine.” Everyone agreed it was a great cheese.

Course #5 was two types of Comté – one aged five months which is often found at Safeway (and in most French grocery stores) and one aged 24 months – and a Beaufort paired with a white Macon-Villages Chardonnay from Beaune. Comté and Beaufort are both considered to be the most popular cheeses in France. At each Paris cheese party I attended, the Comté was well matured and had a much richer flavour than the younger affinage. The flavour is slightly sweet but with a nutty tang. Beaufort is named after the Rhône-Alpes mahogany-coloured cows from Indo-Asia that crossed into Europe and France in early times. The reaction: “I like the Beaufort best,” claimed Jack. Everyone else preferred the older Comté.

The dessert was cheesecake with a Veuve Clicquot champagne which was a lovely end to the cheese party.

Jack had an “epiphany with the Epoisses” claiming he had “never had this in Ohio where I grew up.” Susan enjoyed the pairings that brought out both the cheese and wine flavours. Sally said she would never look at cheese the same way as she had experienced it as a snack or after dinner course which didn’t give honour to the cheese or wine much less the pairing. Kim said, “This was great. Now what’s for dinner?”

Everyone learned a lot, experienced great wine and cheese pairings and had fun. Many French cheeses and wines can be found in the US so designing a cheese party takes a little work but is worth it. Just warn your guests it’s just fromage. They can have dinner when they get home.