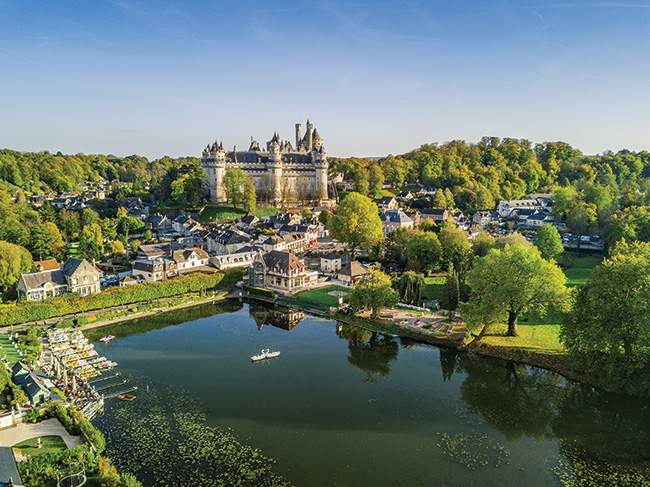 Gillian Thornton soaks up the twin delights of culture and shopping in Hauts-de-France.

From the Channel coast in the north to the Champagne vineyards in the south, the Hauts-de-France region spans five of the most culturally rich départements in France. Of course, culture means different things to different people, from museums and galleries to theatre and music, to architecture, or crafts and traditions. The processional giants and dragons of Northern France, for instance, now feature on UNESCO’s list of Intangible Cultural Heritage of Humanity. Just spend time at the winter carnival in Cassel, Douai or Dunkirk to understand their importance to local cultural life.

Many visitors to the region would also include Remembrance sites on a cultural itinerary, a chance to reflect on lives lost and freedom gained through the memorials, museums and cemeteries that stretch from Flanders and Artois to the Somme and the Chemin des Dames. The young men who lie here in immaculate rows are cultural giants of a different kind.

Culture also embraces different lifestyles. Take a slow boat through the marshland at Saint-Omer, for instance, where the postman still delivers to island cottages by boat. And in Amiens, cruise the wonderful waterways of Les Hortillonnages, a marshland area that is famed for its market gardening.

But whatever your taste in culture, you’ll find it in these five departments. The departments of Nord and Pas-de-Calais were joined as one eponymous region until 2016 when they were combined with Aisne, Oise and Somme, which previously made up Picardy. Today, the Hauts-de-France ‘super region’ boasts the largest number of Musées de France outside of Paris. For those who enjoy buying authentic souvenirs on their travels, the area’s many specialist manufacturers, producers and boutiques add a welcome opportunity for retail therapy to any short break or touring holiday.

And since leaving the EU, British travellers can now shop tax-free in France, provided they obtain a tax refund form at the point of purchase and validate it before leaving the country.

This year marks the tenth anniversary of LouvreLens, the flagship project in the former mining district that spans the border of Nord and Pas-de-Calais. Today, the once grimy mining villages and slag heaps have been repurposed as cultural hubs and historical sites, sports facilities and green spaces, attracting UNESCO World Heritage status as a shining example of urban regeneration. Other cultural projects have had a makeover as well in recent years, so let 2022 be the year you discover a new angle on a familiar area.

Starting out from the Channel coast, many holidaymakers drive off the ferry and bypass Calais in their rush to go south. But the city has upped its act in recent years, the latest addition being the Calais Dragon, which offers visitors a high-level ride along the promenade. For an even loftier lookout point, take the lift to the top of the Town Hall bell tower, one of many across Northern France listed by UNESCO for their distinctive architecture.

Take a close-up view of Rodin’s famous statue of the Burghers of Calais in the gardens below and then head to the Fine Arts Museum to discover its story in the Rodin Room. Don’t leave town without visiting the Cité de la Dentelle et de la Mode, a fascinating museum charting the area’s expertise in lace and fashion. For more craft know-how, head to the Lace and Embroidery Museum in Caudry near Cambrai to discover why Kate Middleton chose to include Caudry lace in her spectacular wedding dress in 2011.

In recent years, Calais and Boulogne have both gained a reputation for their street-art scene, with Boulogne now counting more than 30 urban murals. But France’s largest fishing port has a fascinating past too. Head uphill to explore Boulogne’s Old Town where highlights of the Castle Museum include Greek pottery, Egyptian mummies and a network of underground Gallo-Roman passages. The dome of the Basilica of Notre-Dame is visible from all over town; head down below to visit the largest crypt in France. Further south, one of Europe’s most famous battles took place in the lush farmland of the Seven Valleys, inland from the chic seaside resort of Le Touquet.

Discover how young English King Henry V beat the mounted French nobility with tactics and longbows at the newly revamped museum Azincourt 1415. The popular English spelling of Agincourt is down to poor pronunciation by one of Henry’s knights! Markets have taken place in the two vast squares at Arras since the Middle Ages. Browse the stalls on Wednesday and Saturday mornings beneath another UNESCO-listed belfry, and mooch through the boutiques beneath gabled houses painstakingly rebuilt to their former design after near annihilation in World War I. Explore the Fine Arts Museum too and take a guided tour of the chalk passages which lie beneath the main squares.

Arras wasn’t the only town in Hauts-de-France to need a major rebuild in the 1930s after the devastation of World War I, and many adopted the fashionable new Art Deco style. Follow the Art Deco trail to see flamboyant Art Deco villas and public buildings in the seaside resort of Le Touquet and find more period properties and decoration in Béthune and Lille in the far north, and in Saint-Quentin and Soissons further south in Picardy.

One of Lille’s fantastic markets © Shutterstock

The former mining basin of Northern France spans the departments of the Nord and Pas-de-Calais, and at its heart stands France’s third most visited museum, Louvre-Lens, which opened to the public in December 2012 on the site of a former pithead. The first satellite museum for the Paris-based institution, it covers 5,000 years of history in its free-flow Galerie du Temps as well as staging temporary exhibitions.

Whilst the Roman galleries at the Louvre in Paris are temporarily closed, nearly 300 Roman artefacts are being displayed together for the first time at LouvreLens until July 25. Find out how one city became capital of such a vast empire with the exhibition ‘Rome, La Cité et L’Empire’. The latest visitor attraction to open as part of the cultural mix in the Lens mining.

Head south and Beauvais in the Oise department boasts another Gothic cathedral, the world’s tallest with a floor-to-ceiling height of 49 metres. The city has a long history of tapestry-making but the former National Tapestry Gallery was recently renamed Le Quadrilatère to reflect its changing content as a centre for culture and the arts.

Closest to Paris, the deep south of Hauts-de-France is just 45km from the capital, making the magical castles at Chantilly and Pierrefonds popular day trips for visitors to the City of Light. With water gardens landscaped by André Le Nôtre of Versailles fame, a vast collection of artworks amassed by the Duc d’Aumale and an elegant stable block and equestrian demonstration space, the Domaine de Chantilly offers culture for all tastes. And it’s all just 25 minutes from Paris-Gare du Nord.

Surrounded by the tranquil Forest of Compiègne, the Château de Pierrefonds to the east could be straight from a fairy tale with its turrets and drawbridge. This 14th-century castle, originally built by Louis, Duke of Orléans, was rebuilt in the 19th century, a mix of medieval exterior and colourful Neo-Gothic interior.

Many visitors to Hauts-de-France are surprised to find vineyards this far north, but the champagne-producing area begins in the south-east corner of the region, accounting for 10% of champagne production. Follow the Champagne Tourist Trail through the vineyards and enjoy a tour and tasting.

Big names to look out for are Météyer at Trélou-sur-Marne and Pannier at Château-Thierry – a sparkling end to any trip, whatever your taste in culture!

Previous Article All Aboard the France Rugby Train 2023! First stop: Nantes.
Next Article How to Host a French Cheese and Wine Party