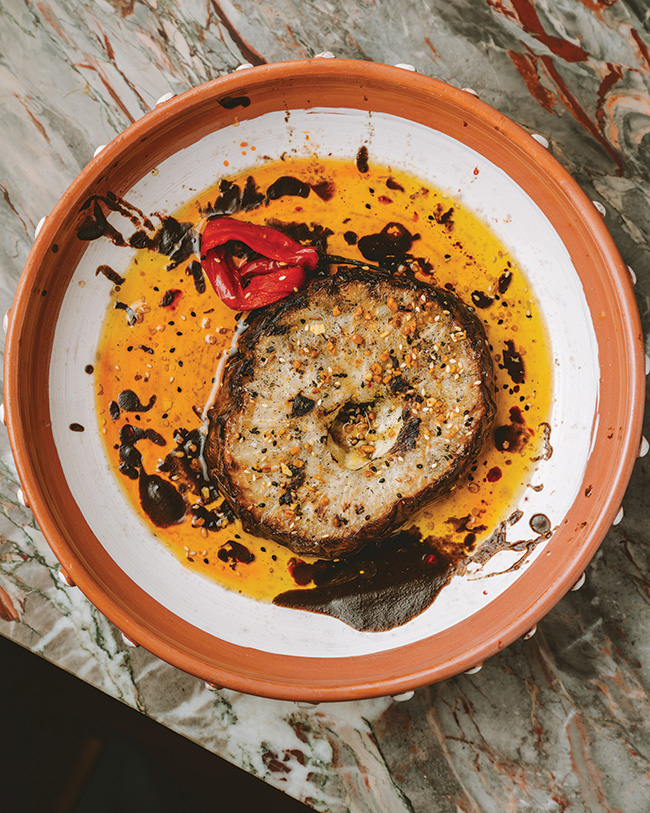 To be perfectly honest, it’s taken me a long time to develop any honest enthusiasm for vegetarian restaurants. This is not because I don’t like vegetables – I do, a lot. Instead it can be explained by the lingering memories of the vegetarian restaurants I was forced to frequent with my two vegetarian best friends during my university days in Boston and London. These meals were hair-shirt miseries composed of stodgy plates of pulses, naked tofu, watery salads and overcooked vegetables, and they were served by people who often had a superior air about them for having forsaken animal protein. What really rankled in their attitude was the implicit disdain for gastronomic pleasure, which they perhaps viewed as a privileged pretence of the bourgeoisie in a hungry world where one should simply be grateful to be well-nourished.

Tekés, run by the Israeli team behind Shabour and Balagan, offers the best of Paris’ vegetarian dining scene © Nawel Odin

Happily, today these scolding late hippie-era hangouts increasingly seem like ancient history as millions of people seek to eat less or no animal protein without foregoing the pleasures of the table. Compared with other major European cities, Paris has been slow to develop an ambitiously gastronomic vegetarian restaurant scene – the long-running exception to this generalisation has been chef Alain Passard’s shudderingly expensive Michelin three-star restaurant L’Arpège – but now that looks to be changing with the opening of Tekés. I knew that I liked this lively, cheerful place in the Sentier neighbourhood – Paris’s old garment district – as soon as I stepped through the door to meet a friend for dinner.

It’s run by the same Israeli team that launched the hugely popular Shabour and Balagan, and here they deliver the vegetarian restaurant Paris has been waiting for. In other words, this is a place that will not only make vegetarians ecstatic but will delight their non-vegetarian dining companions too. Led by Cécile Levy and Dan Yosha, the busy open kitchen favours cooking over charcoal and embers, and it puts on a great show while producing stunningly delicious dishes like grilled courgette with cinnamon labneh and flambéed aubergine.

I loved my beetroot shashlik, which came with feta cream and watercress and was every bit as satisfying in terms of taste and texture as any version made with meat, and my friend was delighted by her ‘Silk Road’, a dish composed of celeriac, clementine, ginger and shushka. We were also intrigued by the vegetarian chicken liver, which is made with a mixture of mushrooms and served with a soft-boiled egg, dates and pine nuts. Excellent desserts and charming service add to the sheer joy.

Previous Article Competition: Win Guidebooks Worth £100
Next Article In the Footsteps of Maurice Chevalier and Mistinguett