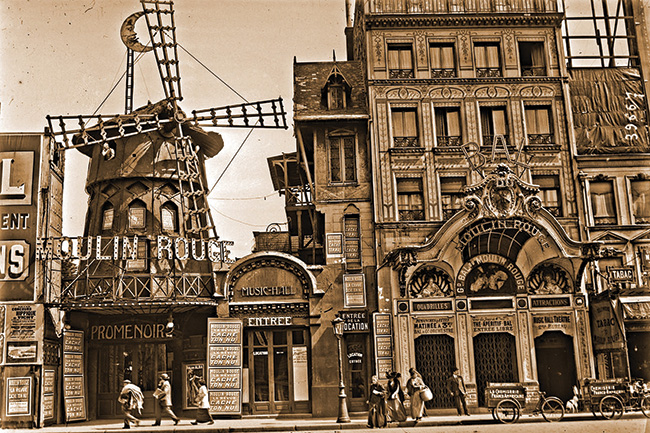 Moulin Rouge dancer Mistinguett and singer Maurice Chevalier struck up a legendary relationship on-stage and off – but it was one that almost proved fatal. Chloe Govan reveals all…

Mistinguett was once the highest paid entertainer in the world: she insured her trademark legs for half a million francs and was a household name across France. Her relationship with onstage partner Maurice Chevalier became legendary as the pair, who had a 15-year-age gap, embarked on a dangerous love affair that led both to question their own mortality.

It all began in 1873 when Mistinguett was born Jeanne Florentine Bourgeois to a modestly paid labourer father and painstakingly hard-working seamstress mother. Her rags to riches journey began in a Paris suburb – the spa district of Enghien-les- Bains (which featured in the movie Amélie). Filled with lakeside idylls and thermal baths renowned for their healing properties, it was where wealthy but weary city dwellers came for a rejuvenating holiday. One day, the area would be filled with some of the glitziest casinos in all of France but nothing like that existed in Mistinguett’s childhood.

The famous Folies Bergère in Paris

By the time she was ten, she had achieved her first step on the ladder to fame, landing a job lifting and lowering the curtain at the Casino de Paris. It ended a childhood spell of singing ballads while selling flowers in the nearby Soisy-sous-Montmorency market.

Five years later in 1888, Maurice Auguste Chevalier was born in Paris’ Ménilmontant district, a hilly location not far from Père Lachaise Cemetery, where his early life was marred by poverty and alcoholism. Before Ménilmontant had officially become part of Paris in 1860, alcohol had been freely available and cheaper than within the city boundaries, and countless bars (guinguettes) had sprung up, a trend that continued apace in Maurice’s childhood. His father, a painter, was an alcoholic who eventually abandoned his lace-maker wife to raise the family alone.

Maurice was reportedly relieved when the tension in the household eased, but his father’s absence left them struggling financially – things were so bad, Maurice even had to spend time in a foster care facility. Desperate to begin earning, he had no plans to start singing – until a series of accidents left him with almost no other choice.

After leaving school at the age of ten, Chevalier at first attempted to earn a living as an acrobat in the circus, but a fall he suffered during an audition at the Cirque d’Hiver terrified his mother and she forbade him to return.

After that, he dabbled in other jobs – carpenter, metal-engraver, electrician’s apprentice and printer – without showing much flair for any of them. He even had a brief stint as a painter, like his father, but with limited success.

Disaster struck yet again when the accident-prone 12-year-old took a job in a factory and ended up crushing and mangling one of his fingers in a machine.
As a last resort, the young Chevalier made his way to a venue to offer his services as an entertainer. At fi rst, it seemed the owners had hired him for a laugh rather than for his talent, as his then off-key and faltering voice was mocked relentlessly.

A poster promoting Mistinguett at the Moulin Rouge

Undeterred, he attempted to compensate for his poor singing by weaving comedy into his performances. The bawdy sense of humour of a boy who was described at the time as “awkward and unsophisticated” was adored by some of the working class revellers, but sneered at by many of the more upper-class patrons. Chevalier, by his own admission, had “no voice” at the time – merely a series of lewd jokes. Yet, driven by his desire to escape poverty, he swallowed his pride and determined to do his best.

With time, he began to improve and later he actually saw his initial lack of ability as a blessing. “Thank God, it was my good luck not to have any voice,” he declared earnestly in the New York Times. “It made me look for something to make me different from a hundred other crooners who are neither good nor bad.”

That something would, in part, be given a helping hand by the sizzling chemistry he shared with Mistinguett, by now an established dancer 15 years his senior. She too had been building up a reputation at venues such as Eldorado and the Moulin Rouge. After Maurice turned 21, they were cast together in a revue at the Folies Bergère. The show saw them rolled up together in a carpet and sensationally unravelled before the audience. Their energetic singing, dancing, somersaulting routine was an instant hit with the crowds.

However, it was rumoured that there was more going on beneath the rolls of carpet than met the eye, with Mistinguett indulging in some mischievous groping, transforming their relationship from professional to personal in the blink of an eye. As a single mother in her 30s with a young son to care for, Mistinguett had more responsibilities and burdens to bear than Chevalier did, yet they became closer than either could have imagined. After he reportedly warded off her ex in a street fight, the pair officially became lovers.

For several years, the glamorous duo enjoyed their new status as highly sought after celebrities, but then disaster struck in the form of the First World War. Chevalier, who was part way through his National Service, found himself on the front line.

Later recounting his memoirs to journalist Percy Cudlipp, he lamented that the conflict had meant “putting aside” his stage ambitions for a while. “When we went into the trenches, there was no more singing or dancing,” he recalled gravely. “One by one, my friends were killed or wounded – and I was beginning to think myself a very lucky fellow to remain unscathed.”

That stroke of luck didn’t last long, however. He was soon hit by an exploding shrapnel shell, which punctured his lung and left him seriously wounded. As fate would have it, within hours of the attack, the Germans gained a stronghold on the local area, ruthlessly capturing any soldier too injured to move – and that included Chevalier. His frustration was palpable. He’d come an extraordinarily long way, from a young penniless boy whose employers had disparagingly sneered at him and branded him a ‘titi’ to a highly paid and respected performer. Yet now, wounded and captured, with blood pouring from his mouth, it seemed all was lost.

The Trauma of War

Chevalier was hauled off to a prisoner of war camp, where he spent two years and four months. Undaunted, Mistinguett stepped in to save the day – a risky manoeuvre that almost proved fatal for them both. She embarked on a perilous rescue mission to save her man, but ended up walking a tight-rope between two warring countries.

During her deadly, dangerous escapades, she secretly offered her services as a spy to both France and Germany – and ended up almost being executed by both. The French detained her and threatened to kill her after she was mistakenly identified as Mata Hari, and after she’d wriggled her way out of that one, her fake collaboration with the Germans almost saw her meet her untimely death too.

Maurice Chevalier and Mistinguett performing together

Finally, she discovered an admirer in Spanish King Alfonso XIII – and he struck a clandestine deal that would lead to Chevalier’s release. As someone who had both British and Germany ancestry, Alfonso XIII was the picture of political neutrality. “Through the King, it had been arranged that the French and Germans should exchange prisoners who were ambulance workers,” Chevalier revealed to journalist Percy Cudlipp, “so I became an ambulance worker. That is, I altered my identification papers, then claimed a mistake had been made in that I should have been sent back to France. Had the deception been discovered, my punishment would have been severe.’’

The risk paid off. Free at last, he returned to Paris and was awarded the Croix de Guerre for his wartime bravery. Years later during the Second World War, he heroically returned to the same camp where he had once been held prisoner, performing for the inmates and then demanding the freedom of ten of them as payment for his services.

Back in Paris after his experiences in the First World War, however, Chevalier found he was too traumatised to perform. Ever devoted, Mistinguett played a major role in nursing him back to health, loyally telling venues she wouldn’t perform unless he was on the billing by her side. Although she’d made the ultimate sacrifice and risked her life for him, her heart broke all over again when, eventually, she realised they were drifting apart.

By 1918, he’d started an affair with another woman and Mistinguett had lost the love of her life for good. Despite the pain of betrayal, she never regretted helping him in the spirit of friendship – and both went on to achieve giddy heights in their careers individually. Mistinguett became the highest paid female performer Paris had ever known, eventually dying at 82 in 1956. In her obituary, Jean Cocteau paid tribute to her “husky, trailing voice of the Paris people”. Meanwhile, Chevalier became a household name around the globe. After his death aged 83 in 1972, Newsweek wrote “as effervescent as vintage champagne, as durable as the Eiffel Tower… [he] easily lived up to his billing as The Most Popular Frenchman In The World”.