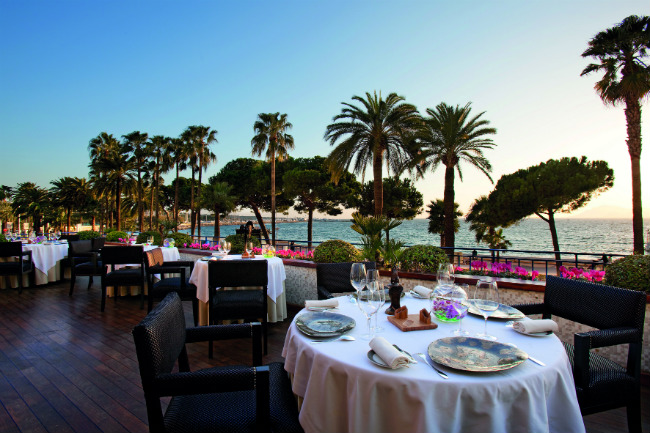 Just after this legendary restaurant at the Hôtel Martinez on La Croisette in Cannes reopened for the season on March 7, a friend from Los Angeles who was in town for business (the usual reason anyone’s in Cannes these days) invited me to dinner at chef Christian Sinicropi’s Michelin two-star table. Staring out of the window at the puffy yellow bursts of mimosa in bloom from the train I took from Marseille to meet her, I found myself wondering how this chef’s cooking would have evolved since the last time I ate here, some ten years ago. In a refrain, I was also thinking about how much has changed during the 30 years I’ve been regularly dining at the best restaurants along the Côte d’Azur.

In 1989, high-end dining on the Riviera was generally a formal experience in hushed ornate dining rooms with crystal chandeliers, Louis-something furniture, and eye-watering prices. Much of the cooking at places like Le Chantecler at the Hôtel Negresco in Nice or La Chèvre d’Or in Èze was excellent but tended to be slightly baroque and somewhat fussy in aesthetic terms.

Yet even then, all this was quietly being upended by a young Gascon chef who’d taken over the Louis XV at the Hôtel de Paris in Monaco. Alain Ducasse, who famously said that any dish is too complicated if it contains more than four ingredients, was inventing and refining a New Mediterranean cooking based on locally-grown seasonal produce, freshly-caught seafood and traditional Provençal and Italian taste constellations made fresher and lighter with shorter cooking times and mostly cream-and-butter-free sauces based on citrus, olive oil and jus. 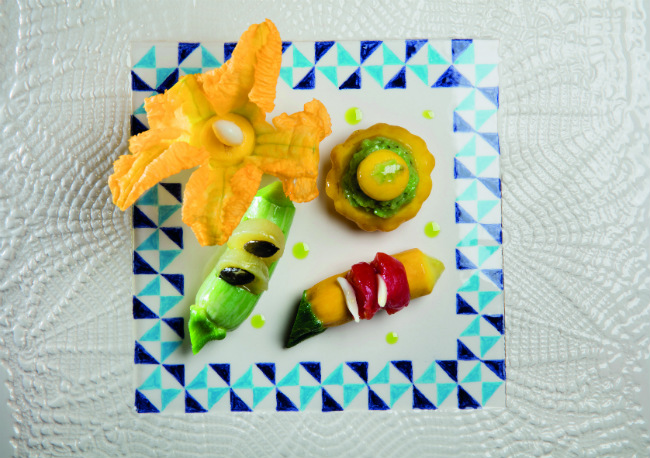 Ultimately, Ducasse’s cooking announced a fresh gastronomic era on the Côte d’Azur and paved the way for a new idiom of southern French luxury cooking based on an ethereal simplicity, one which sought to enhance rather than transform the natural tastes of the assiduously-sourced produce it was based on. My two favourite restaurants on the Côte d’Azur offer perfect examples of this style and philosophy: Mauro Colagreco’s Mirazur in Menton and Gérald Passedat’s Le Petit Nice in Marseille. For sure, there are some Côte d’Azur restaurants that still go for the magic-show drama of yore (La Vague d’Or in Saint-Tropez, which inexplicably has three Michelin stars, comes to mind), but most of the best tables now adhere to Ducasse’s format, either because their chefs were trained by him or because they know that this is how the world wants to eat these days. But what of La Palme d’Or?

Since Cannes has become a convention town where high-end meals often end up on expense accounts, would the town’s best restaurant veer towards theatrical optics, or adhere to a gastronomical humility guided by good taste? The wonderfully louche Martinez, my favourite hotel in Cannes, has been bought by the American hotel group Hyatt since I was last here, but it seems they’ve had the sense to leave this monument to French joie de vivre pretty much untouched. The table was, however, set with ceramics made by the chef and his wife (Sinicropi did a course at the École des Beaux-Arts in Vallauris, the nearby town with a vocation for pottery), and their fanciful forms and colours announced that the impending meal would be decidedly experiential.

That said, there are different ways of dining here, including an à la carte menu designed to appeal to people who want an excellent feed without extra bells and whistles, and then the chef’s more elaborate menus, including a slate of dishes where a single product – pigeon, oysters, prawns – is declined in three preparations. Favouring solid gastronomy over theatricality, we decided to dine à la carte.

Our seafood starters – spider crab with a gélee and bouillon, and king prawns with crispy rice, were beautifully prepared. They also displayed the Cannes-born chef’s deep technicity, and the years he spent at chef Antoine Westermann’s restaurant Buerehiesel in Strasbourg and Ducasse’s Le Louis XV in Monaco. This being Cannes, however, there was a certain gratuitous theatricality in the plating, something I found superfluous, but then I’m more interested in how something tastes than in being entertained at the table. I suspect, however, that many of the restaurant’s clients rather enjoy the more baroque side of Sinicropi’s creativity.

Main courses were magisterial too. Scallops with sweetbread sauce sounded peculiar, but the marriage of the sweet bivalves and the organ meat was intriguingly successful; while turbot cooked on the bone with spring vegetables was a dish that elegantly showcased the flavour of the fish. Desserts were similarly creative and also privileged the taste and texture of the produce with which they were prepared. They were served in two declensions. “The Strawberry” debuted with wild strawberries and then a composition of the fruit with orange blossom and marjoram. “The Apricot” came as a riff on an île flottante and then an exquisite soufflé.

Service was attentive but never invasive throughout a superb meal that brought to mind a well-known dictum of another famous son of the Riviera, Auguste Escoffier, who was born in nearby Villeneuve-Loubet and who said, “Faites simple (keep it simple). Things should taste of what they are”. For all of his theatricality, Christian Sinicropi abides by this gastronomic verity, and this is why a meal at La Palme d’Or is a spectacular experience. (N.B. Dinner only, except on Saturday.)