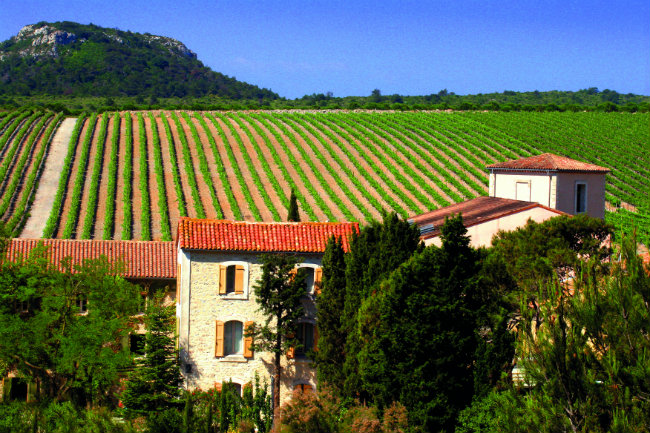 Winemaker Gérard Bertrand took over his family’s vineyards in the Languedoc 30 years ago and has worked tirelessly ever since to improve their quality and promote not only his own wines but all those made in the region. A particular measure of his success was that his Cigalus 2016 red was selected for the Nobel Prize dinner in Stockholm last year.

Visiting his headquarters at the Château l’Hospitalet outside Narbonne for a tasting is a delightful way of discovering these good-value yet well-made wines; another is enjoying them over a meal at the Château’s restaurant, L’Art de Vivre.

Here, chef Laurent Chabert cooks beautifully southern and sunny dishes that are specifically conceived to accompany Bertrand’s wines – all of which are served by the glass at the restaurant. Stopping here for dinner, so that we could stay the night at the hotel and not have to worry about enjoying the wines, we began with two superb starters: rockfish soup with roasted gurnard, garlic, egg white and saffron grown in nearby Gruissan; and an intriguing preparation of local Tarbouriech oysters in fennel and celeriac gelée with hazelnuts, celeriac cream, Granny Smith apple, cider and spirulina vinaigrette. What made both of them so good was the use of local produce and Chabert’s well-reasoned creativity.

The main courses were outstanding as well, including a quite brilliant dish of Mediterranean sole with a crust of capers and parsley, salsify and a jus de poisson seasoned with olives from Lucques and pickled lemon; and lamb from Saissac served with herbed polenta.

After an excellent cheese tray, we tucked into a blood-orange tartlet with liquorice marmalade and an upside-down apple tart with vanilla cream. The by-the-glass wine pairings with each course were excellent, and service was relaxed and friendly.

Previous Article Summer in France: How to Spend 48 Hours in Le Touquet
Next Article The Judgement of Paris: The Day America Beat France