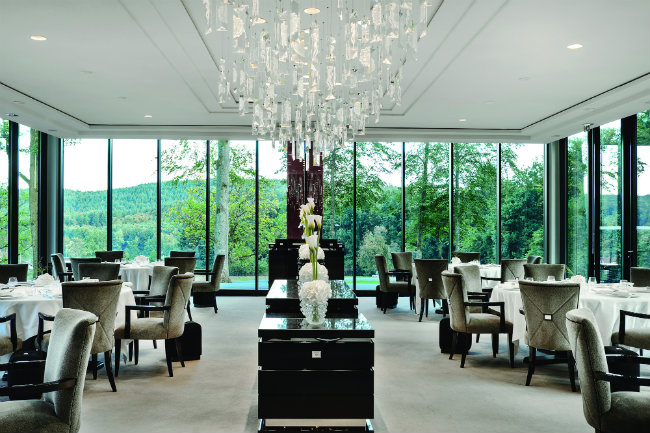 Surrounded by the conifer-scented forests of the Parc Régional des Vosges in Alsace, the charming village of Wingen-sur-Moder suddenly found itself on the map of important French gastronomic destinations for the first time last September. This was due to the opening of the Villa René Lalique, a new six-suite hotel and restaurant in the painstakingly restored, half-timbered villa of René Lalique, who in 1922 founded the crystal-producing atelier here that employs over two hundred people at the company’s unique production site. The adjacent Musée Lalique also attracts tens of thousands of visitors annually to the little town.

In a coup that set tongues wagging in French gastronomic circles, Lalique’s owner, Silvio Denz, hired chef Jean-Georges Klein, who previously held three Michelin stars at his family’s restaurant, L’Arnsbourg, in nearby Baerenthal, to run the kitchen of the Villa Lalique’s restaurant, which is located in a magnificently understated pink sandstone-and-glass pavilion adjacent to the original villa that was designed by Swiss architect Mario Botta.

“I loved the challenge of creating a new restaurant,” says Klein, a gentle man whose almost poignantly delicate and refined style of cooking issues from the inflection point where his rigorous technical precision intersects with his lyrical culinary imagination. “I also wanted to recover some serenity,” the chef adds wistfully, a discreet reference to the fact that Klein and his sister Cathie had long been at loggerheads over the future of the restaurant they owned in common. 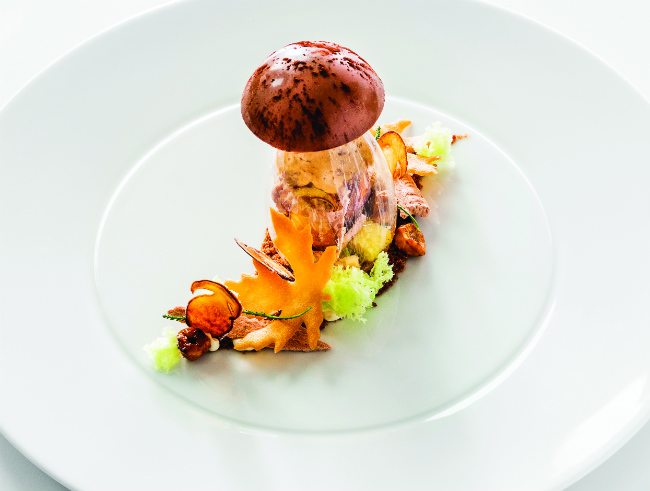 The first pleasure of a meal here is the elegant and stunningly refined dining room. It has huge picture windows overlooking the nearby woods, a neutral palette to serve as a back drop for small but striking Art Deco-style Lalique crystal wall inserts, and lighting that includes a Windfall chandelier composed of a hundred individually hung pieces of crystal.

Then there’s the fact that Klein’s fine and often frankly rich cooking is exactly what one is looking for from a haute-cuisine meal – to wit, something lavish and exultantly memorable. In contrast to the rather Spartan minimalism of many Parisian chefs, Klein loves butter and would not flinch at being called a classicist, albeit an exceptionally gifted one. Still, there’s a subtle modernity to both Klein’s cooking and the service style of this table, specifically the exceptionally warm and charming ministrations of sommelier Romain Iltis, who has created a wine list that features what is possibly the world’s finest selection of Alsatian wines. Then, too, there’s a substantial offer at this restaurant for vegetarians, both à la carte and in terms of an all-vegetarian prix-fixe menu offered alongside the traditional one.

Dining on a spring night, I chose the “Creation” prix-fixe menu to sample some of Klein’s newest dishes. After a pleasantly coquettish selection of starters, the meal began with a cauliflower royal (flan) garnished with roasted hazelnuts and with a white-cabbage tart topped with herring caviar, a nonchalantly luxurious dish that mixed homely vegetables with precious fish eggs. Next, a fine exercise in traditional French cooking, a boned and folded skate wing with an impeccably made beurre noisette and a silken potato purée so rich in butter that this was its dominant taste. Klein was bolder with a fillet of veal wrapped in sausage forcemeat under a crust of black rice purée – a real high-wire act in terms of the fact that the different elements of this dish would normally require different cooking times – and served rare in a luscious mahogany-coloured pool of caraway-spiked jus.

Dessert was a final display of the chef’s wily edible wit, a declension of the tomato, which included a tomato poached in sugar syrup, a salad of fresh tomatoes, tomato jam and tomato ice cream. The frequently querulous Michelin guide awarded this table two stars in the 2016 Guide to France, and for once I was entirely in agreement – it’s a splendid restaurant.

Previous Article An Insider’s Guide to Gascony
Next Article How Would You Spend €1,000 in Normandy?