An Insider’s Guide to Gascony 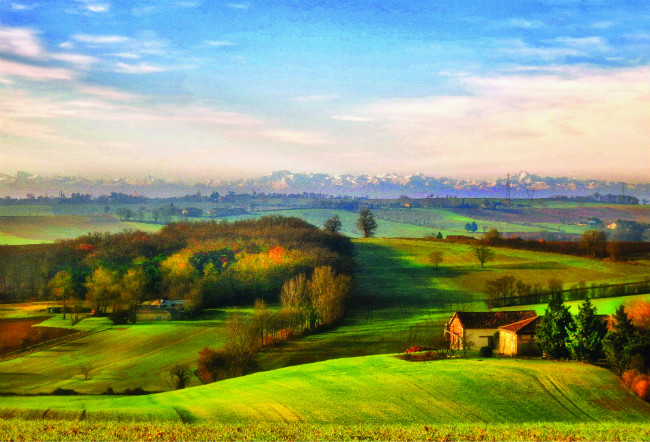 Twenty years ago Gascony wasn’t on many people’s must-visit lists, but it’s now being lauded as France’s new Bordeaux and foodie paradise by Condé Nast Traveler and CNN. Bordered on the west by the Atlantic ocean, the south by the Pyrénées mountains, the east by Toulouse and the north by the vineyards of Bordeaux, the region is dappled with ancient Roman ruins and humble bastides and remains as historically rich as it was in medieval times. Unchanged since the 1950s by industry, tourism or major highways, its landscape has remained agricultural for centuries. With white clouds that languish in deep blue skies above fields of bright yellow sunflowers, sun-kissed vineyards that stretch to the horizon, and velvet green pastures dotted with gaggles of geese and cream-coloured cows, Gascony’s appeal is seductively earthy, full-bodied and lusty, like its wines. It’s a culinary heartland of garlic, foie gras, duck confit, and France’s oldest brandy, Armagnac, and is as authentically farm-to-table as it gets.

Gascony entered recorded history during the reign of Julius Caesar as the core territory of Roman Aquitania. Its fertile soil was nourished by the rivers descending from the Pyrénées to the plains below. In his memoir, Caesar described the machinations occurring during his nine years of fighting the Gauls, an alliance of nine tribes which included the Vascones. The Vascones defined a confederacy of non-Romanised tribes who inhabited both sides of the Pyrénées and shared common traditions. By the late 6th century several of their tribes moved north, over the Pyrénées, and down into the territory they called Vasconia, which now comprises the seven departments in southwestern France called Gascony. The remaining portion in Spain became the Basque Country. The subsequent history of the area offers fascinating reading in its own right, highlighted by the story of Eleanor of Aquitaine, one of the most remarkable women in all of history, and seasoned with Chaucerian tales spun along the Santiago de Compostela pilgrimage route to Spain, which criss-crosses most of Gascony.

As were their forebears, Gascons today are known to be independent, brave, hardy, boastful and, most of all, welcoming. Those visitors who venture into Gascony tend to follow the few well-publicised tourist paths either to Lupiac, the birthplace of D’Artagnan, one of the Three Musketeers made famous in the novel by Alexandre Dumas, or Lourdes, which, following the Marian apparitions of 1858, became a Catholic pilgrimage site.

If, like many, you have a desire to escape the dysphoria of the 21st century, here you’ll find an undiscovered paradise with some of the most spectacular scenery in France. Gascony is truly a land that time forgot. 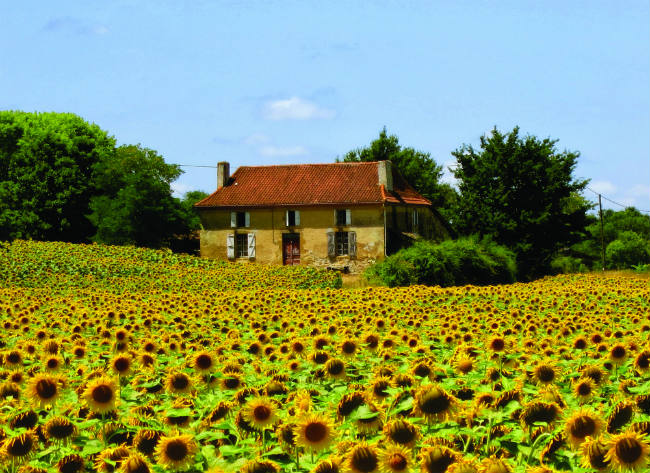 Salies-de-Béarn is located in the Pyrénées-Atlantique department in the south-western most part of France. It’s a heady mixture of the Spanish and French Basque regions, rich in local gastronomie de terroir and robust wines. Salies is a picture-perfect village of vertiginous, gabled houses overlooking the Saleys River. Known from the Bronze Age as the ‘Salt City’ for having an underground water source seven times saltier than the ocean, its signature product was lucrative until the mid-19th century, when competition from the Languedoc and the Camargue weakened the salt market dramatically. Salies then reinvented itself as a spa village. In addition to the virtues of its salt, the local water contains more magnesium than any other natural spring in the world. Its spa is still in operation, offering health, beauty and fitness regimes.

There are many recreational choices to match one’s individual tastes, including cycling, fishing, kayaking or rafting on the beautiful Gave de Pau and Gave d’Oloron rivers nearby. Whether you’re vacationing or just passing through, you’ll want to time your visit to include lunch at Les Fontaines Fleuries, one of the best restaurants in which I have ever had the pleasure of eating. Their menu is sourced from local producers, prepared in-house, and is superlative. The husband-and-wife team of Florian and Lucie Constantin run their restaurant flawlessly. Florian is the artisan chef and patissier while Lucie is the hostess, and they couldn’t be more pleasant and accommodating. After savouring your meal, you’ll want to linger over any one of Florian’s delicious desserts. If you’re too full, simply order a coffee, which comes with its own little slice-of-heaven chocolate cake on the side. 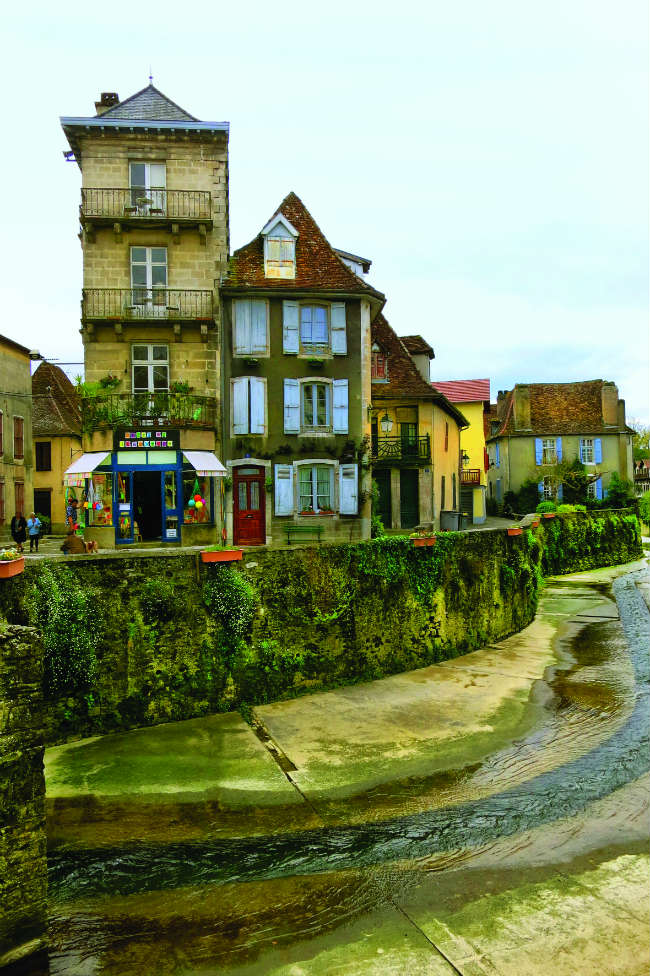 Lectoure was the first capital of the Gers department, considered the heart of Gascony. During the Middle Ages it became the capital of the Counts of Armagnac, three very influential territorial lords who commanded strategic parts of historic Gascony. It was sacked and rebuilt by Louis XI in 1473, and when Napoléon Bonaparte created the départements de France, the Gers’ capital was moved south to the city of Auch. Today Lectoure is a beautifully re-defined, Neo-Classical, hilltop village with its one main street running east to west. Its cathedral, Saint-Gervais, which was rebuilt in 1488, stands as a sentinel at the east entrance of the village. Walking from one end to the other, you’ll pass lovely old convents, half-timbered houses, and remnants of its original, fortified wall. Book-ending the west entrance of the village is the château of the Counts of Armagnac which was recently renovated into a sprawling antique mall.

The views from either side of the village are breathtaking, and on a clear day you can see the Pyrénées and a large swathe of the Gers Valley. Lectoure’s pièces de résistance include its annual crop of potently fragrant cantaloupe melons, its rose-pink garlic (comprising more than a third of France’s entire crop), and its 20 pagan altars from the 2nd and 3rd centuries which are housed in its museum.

Lectoure holds a fantastic farmer’s market every Friday. You can walk the gauntlet, sampling cheeses, olives, fresh vegetables and wine, or stop at Maison Baudequin, a magical chocolate shop, for a thick hot chocolate topped with whipped cream that rivals those of the famous Angelina’s on the Rue de Rivoli in Paris. 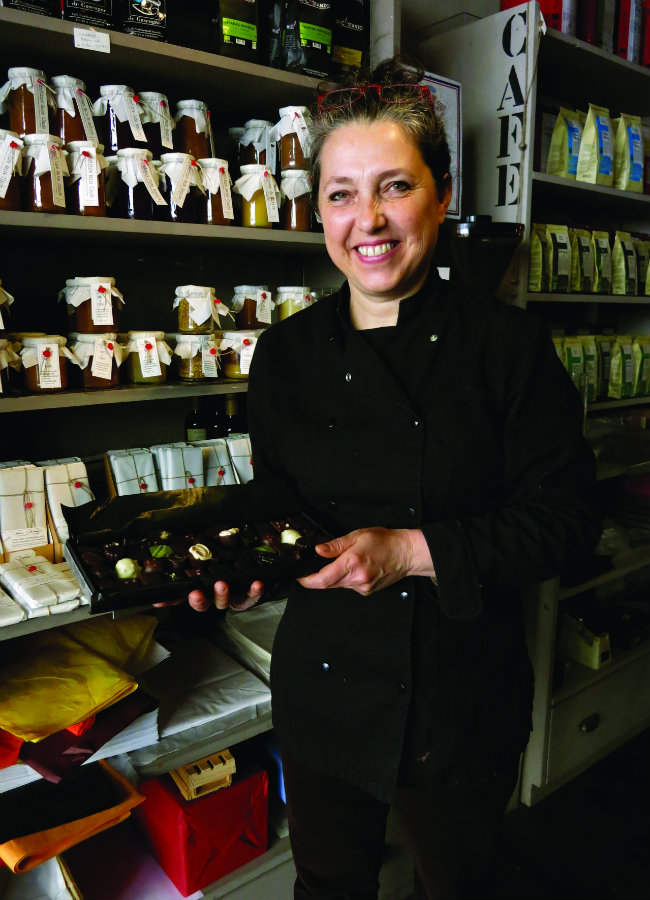 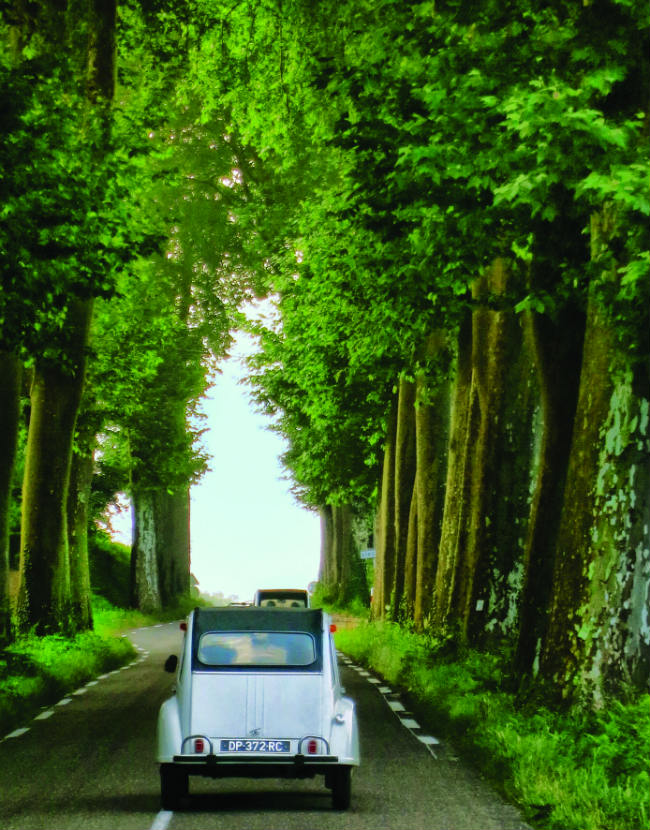 Founded in 1291, when Gascony still belonged to England, Labastide-d’Armagnac is the most charming, medieval village in the Landes department. Place Royale, its main arcaded square, is said to be the model for the Place des Vosges in Paris, commissioned by Henri IV. When I visit there, I always feel as if I’ve stepped onto a Hollywood movie set and you can easily be a flâneur here. The most prominent feature of the Place Royal is the elegant church, Notre-Dame de Labastide, while a visit to the Bar Tortoré, the oldest bar in the region, offers a chance to rub shoulders with the locals. If you’re a French speaker, the bar’s owner, Colette, will regale you with local stories that go back to WWII, when her father ran the establishment.

Labastide-d’Armagnac is the annual venue for the Armagnac Festival. Considered the nectar of the gods and superior to Cognac, Armagnac is showcased in all of its vintages throughout the Place Royale. For six euros you can purchase an empty glass and taste your way around the square. Last year the festival partnered with Slow Food International, and by lunchtime the atmosphere was positively bacchanalian. As the locals enthuse, “Wine is the only thing that makes us happy as adults for no reason”. This year’s festival takes place on October 22nd and 23rd.

Once home to the court of Henri IV, Nérac remains one of the most attractive larger villages in the Lot-et-Garonne department. During the Wars of Religion (1562-1598) Henri’s son, Louis XIII, ordered the entire city destroyed. Nérac lay fallow until the 18th century, when it developed into a thriving agricultural community. So economically important was the city thought to be by then that in 1830, Baron Haussmann, who redesigned Paris in the 1850s, was sent to rebuild Nérac’s roads and bridges.

Nérac has one of the best Saturday farmers’ markets in the department. You can arrive early, have a mouth-watering pastry at the corner patisserie with a cup of delicious coffee, then set off on a leisurely stroll through the many market stalls. You can also ride one of several riverboats along the picturesque River Baïse, which bisects the village, or promenade beneath the shade of a variety of stately trees in the grand park, La Garenne. This 35-hectare park, with its many hidden nooks and crannies, was the inspiration for Shakespeare’s Love’s Labours Lost. 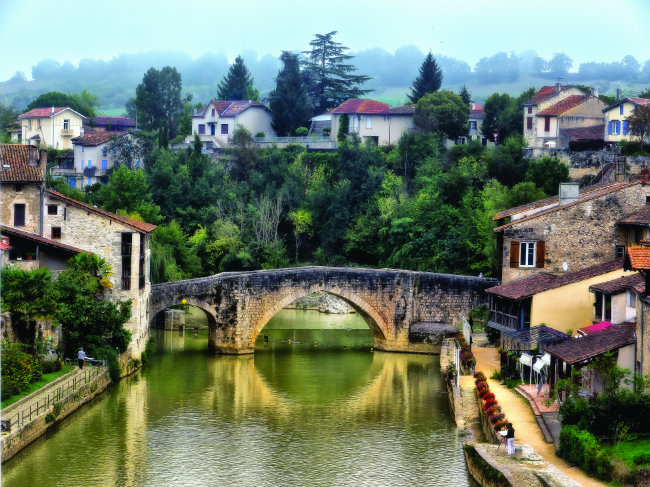 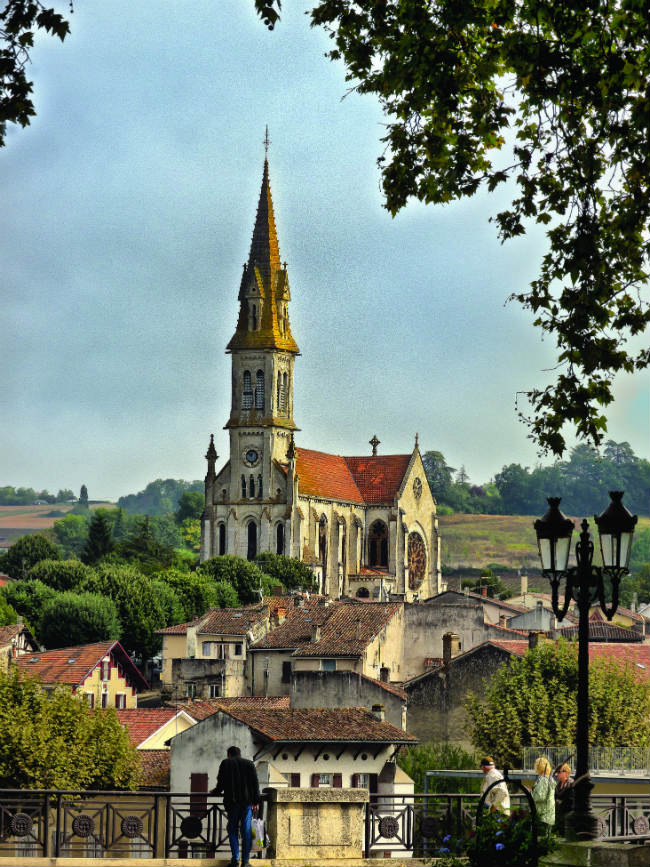 Nérac’s Church of Notre-Dame was built in 1868. Photo: Sue Aran

Perched on a cliff and surrounded by spectacular vineyards – most notably those of Château d’Yquem – Bazas is a jewel in the Gironde department. For 2,500 years Bazas was the capital city of the Celts, then the Romans. According to legend, its original church held a coveted relic which gave the town its prominence: a cloth with the blood of St. John the Baptist, wiped up by a woman from Bazas. A triple church was begun in 1233 to house the cloth, and it remained there until the Revolution in 1789, when a fanatic ripped it from its shrine and threw it into a cesspool. This amazing Gothic cathedral was finally completed in 1635 and sits on an imposing rise at the end of an unusually vast, arcaded square that provides shelter and shade for shops and cafés. It’s serpentine, cobbled streets beckon admirers to view an eclectic variety of bourgeois houses and gardens.

Bazas was listed as a UNESCO World Heritage site in 1998. It lies just off the Bordeaux-Graves-Sauternes Wine Route, where you can journey through 7,300 hectares of vineyards and visit some 494 winemakers in 52 villages for wine tastings. 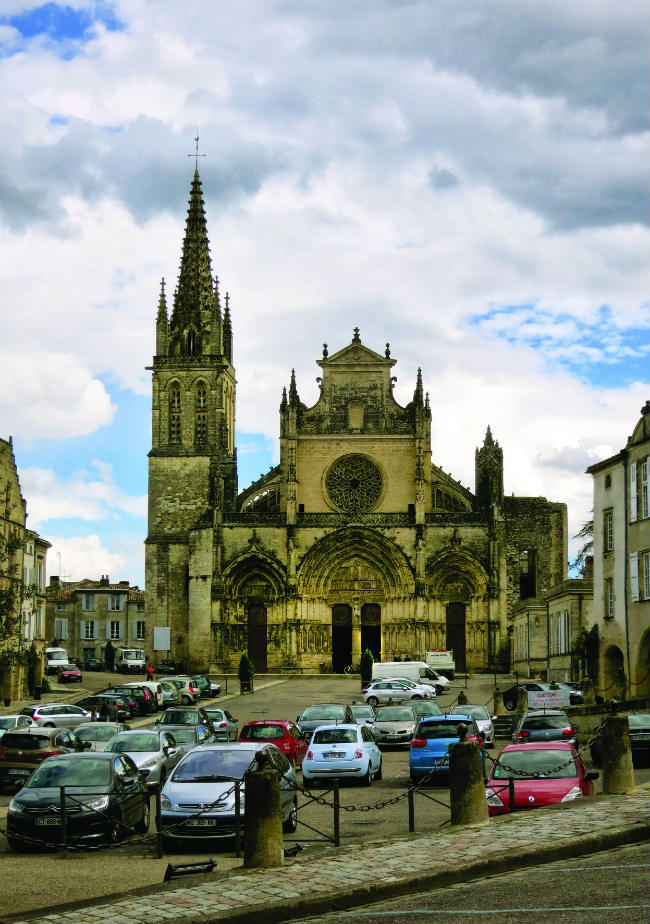 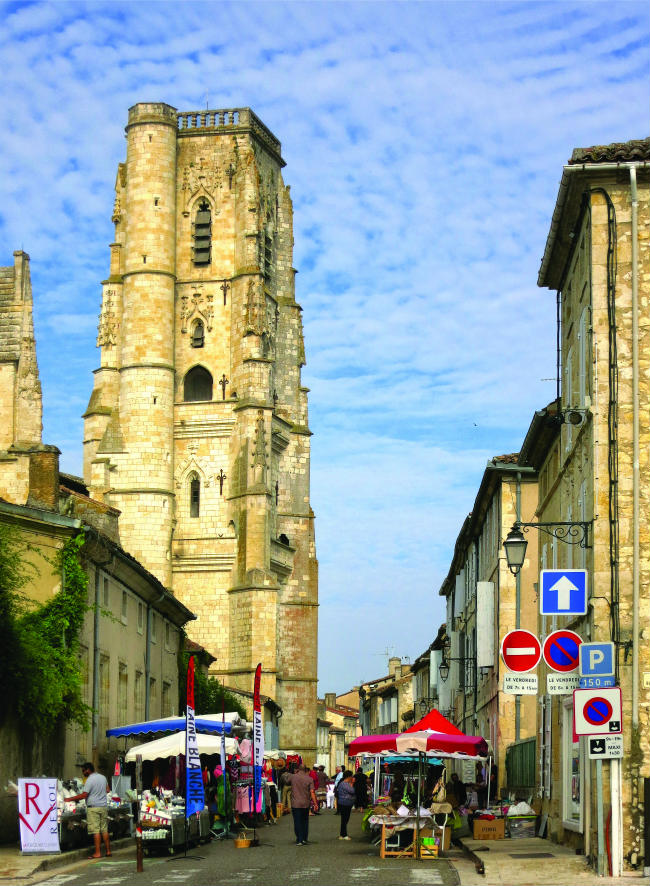 Saint-Gervais cathedral in Lectoure dates back to the 12th century. Photo: Sue Aran