Saffron in France: Red Gold in the Lot 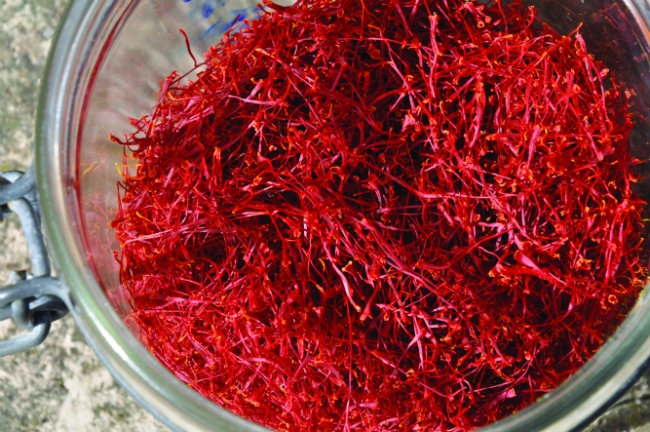 Saffron, a spice more expensive than gold, was once grown widely in France and exported in great quantities. Last century, after countries like India and Iran took over the trade and phylloxera had hit, hardly any saffron was left in France. Now 65 farmers are growing this traditional crop again in the Lot. Crocus sativus bears delicate mauve flowers with bright red stigmata, its saffron, in autumn. The harvest is celebrated with a popular festival in Cajarc, a village in the natural park of the Causses du Quercy. 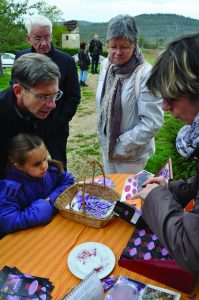 visiting a Saffron farm in the Lot. Photo: Alice Broeksma

Many of the older locals in the Lot, historically a poor area and part of the Quercy, remember saffron from their youth. The farmers made do with what little was available. It never was an easy département to live in, the landscape and the summer heat can be unforgiving. Rocky limestone cliffs stretch out across stoney plateaux; it is a rugged landscape with agriculture only possible in the fertile areas down by the sinuous river, flowing from the Massif Central to the Aquitaine basin in the South-West of France.

The Quercy is named after the Quercus Ilex, the Mediterranean evergreen oak that grows in the sun. In the shade, the European oak grows. Here, Mediterranean and Atlantic climates meet. Far from the larger cities, it has the lowest level of light pollution in France, and the ‘dark triangle of Quercy’ is now famous. Nights can be spectacular when the Milky Way lights up the sky. Distant ancestors lived in this region. There are prehistoric caves with cave art, like the one at Pech-Merle where the River Célé flows into the Lot. 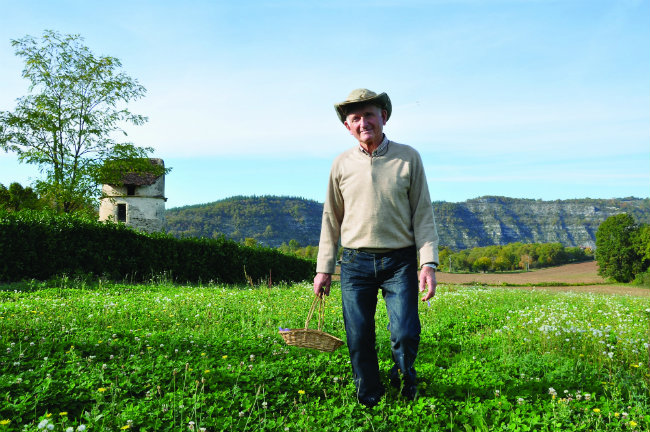 Cajarc, the 13th century village in the Lot where the Saffron Festival is held in autumn, is still very authentic. Situated in the regional natural park Causses du Quercy, where biodiversity and natural resources are conserved, Cajarc is also the birthplace of one of France’s heroes, the author Françoise Sagan (1935-2004). She was eighteen and bored, dreaming of intrigue and the big city, when she wrote her international bestseller Bonjour Tristesse. Now a national treasure, any native of Cajarc can tell you where she was born. The house is a typical maison de ville; Françoise’s parents were industrialists. In the 19th century, the Industrial Revolution reached parts of the otherwise agricultural South-West. Coal seams were exploited, ironworks founded, blast furnaces constructed with technicians and materials from England, railways were built, and the River Lot completed a transformation in 1860 with more than seventy dams and locks. But the river was not canalized soon enough and the rail route was too long. The industries collapsed.

Agriculture would remain the most important source of income – vegetables and fruit, and maize. Saffron had been grown and exported from the sixteenth century. The flowers in those days grew in so many French fields that the farmers sometimes just fed the saffron bulbs to their pigs. 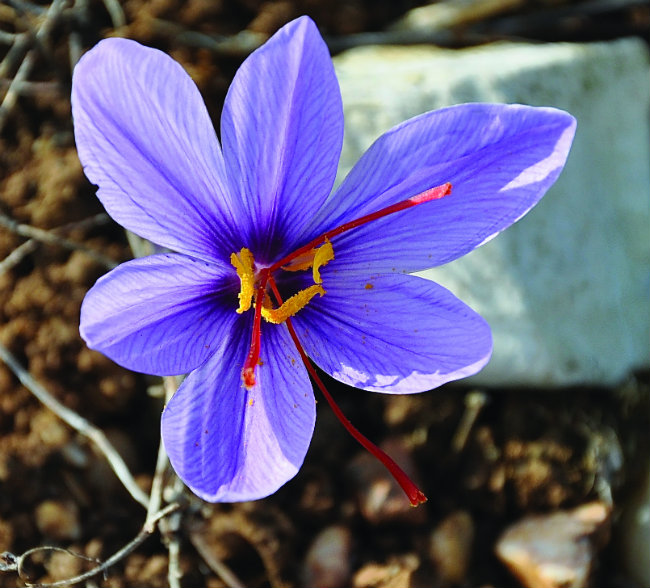 The spice has always been a familiar ingredient in the Mediterranean kitchen. It is not known where exactly crocus sativus first came from, maybe from Mesopotamia. The words ‘crocus’ and ‘saffron’ feature in many old languages – in Greek, Latin and Arabic. Legends about the flower exist in Kashmir. Saffron was sought after for its flavour, healing qualities and its colour. In antiquity, Assyrian and Egyptian kings had their capes dyed with saffron; in Egypt, Cleopatra used it for cosmetics. In the Middle Ages the spice was used to strengthen body and soul. Saffron from France was renowned, and so expensive that falsification was severely punished– in Germany, even by the death penalty. 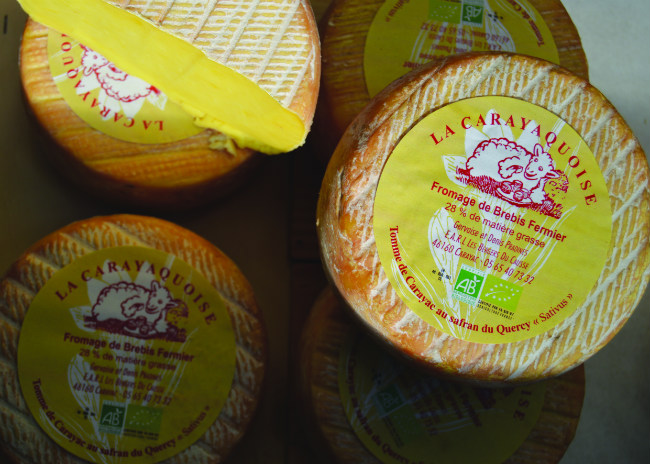 It was after these boom times that France lost most of its saffron production to phylloxera, which destroyed many ancient vineyards too. Wars raged as well. Like other rural areas, the Quercy was depopulated. But even if there had been workers left, labour elsewhere was cheaper. Spain, Greece, India and Iran are now the largest saffron-producing countries. However, saffron from distant shores was not always reliable: other colourants were used, and foreign ingredients such as marigold. Turmeric, too, may be falsely traded as saffron, but has an altogether different flavour. Saffron sometimes is mixed with the fibre of other plants, even with brick-dust. Fraudsters can rake in the money. 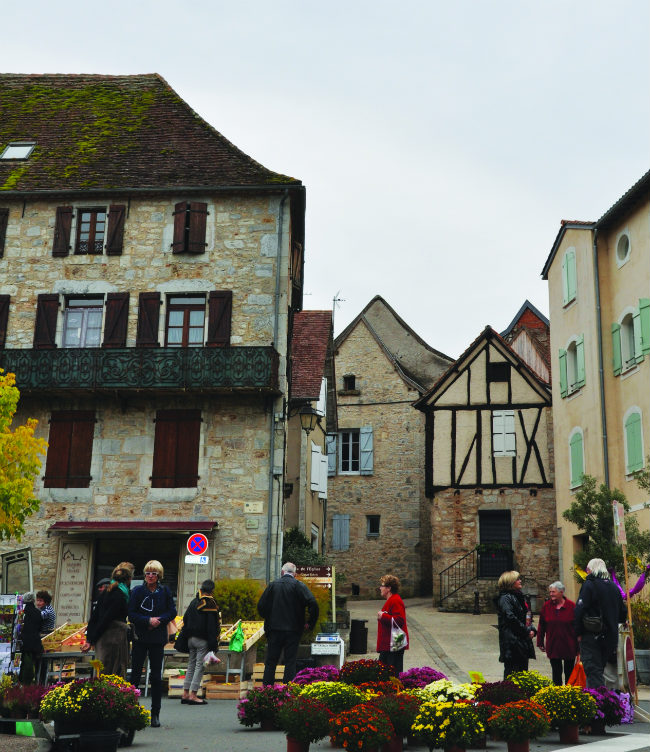 a Saffron Festival is held each autumn in Cajarc. Photo: Alice Broeksma

“Saffron from the Quercy is the purest. The best in the world, by far,” says Didier Burg without blushing. Burg is president of the Association des Safraniers du Quercy, which promotes saffron and safeguards the quality of its production. Twenty years ago, there was a new interest to bring back saffron. The region now has 65 producers, 40 of whom sell their saffron.

There is a revival in other areas of France too. Didier Burg estimates that France at this moment produces 50 to 100 kilos a year. He grows the flowers himself, in a field near his house just south of the river. Alongside other agricultural activities, Didier cultivates 10,000 bulbs, producing 150 grams of saffron a year. It was his father-in-law who, as a farmer always keen to earn a little extra, was immediately interested when there was a regional initiative to bring back saffron. “It became a passion here to do so.” When his father-in-law retired, Didier, who previously worked as a land surveyor, took over the farm and planted more bulbs – just for the love of it; as a side line.

But colleagues in the area are expanding. After all, a kilo of saffron, the true ‘red gold’, has a value of €30,000. The spice is so expensive because of the labour involved (an acre of land with saffron demands more than 1,500 man hours) and the amount of saffron required to make up the weight. Each flower has three stigmata (filaments). For one kilo of saffron, 150,000 stigmata are needed. They must be oven-dried to be conserved properly and to obtain the best flavour. During the drying process, the stigmata lose 80 per cent of their weight. 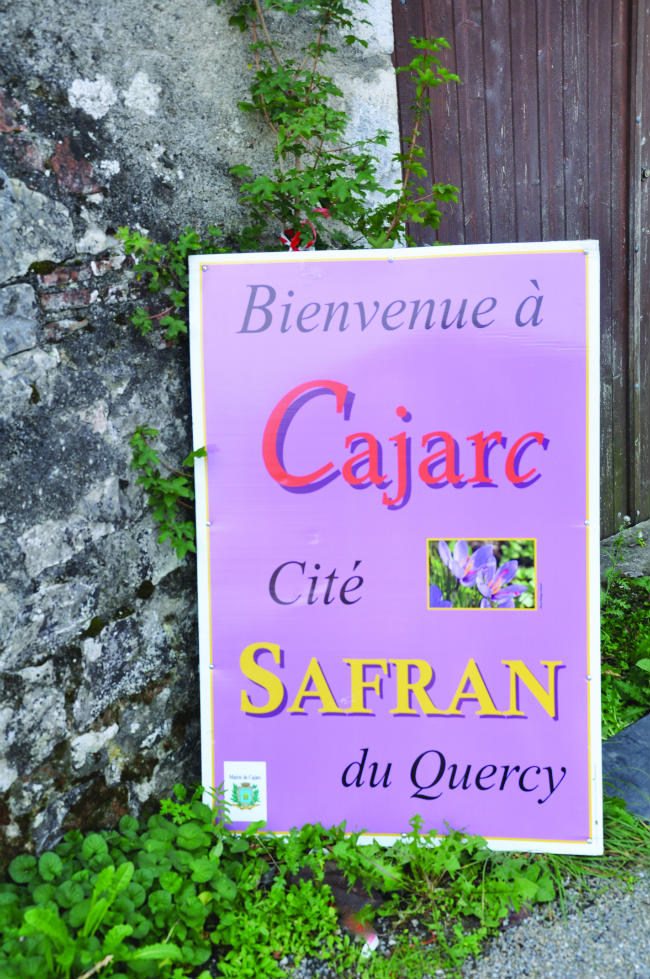 Cajarc, a village in the Lot, hosts a Saffron Festival. Photo: Alice Broeksma

Harvest time, at the end of October, is a real feast. The Saffron Festival in Cajarc consists of a market with the dried saffron en vrac, a variety of products, a big village meal and special menus in local restaurants all incorporating saffron. Only a small quantity of the spice is needed to colour and flavour a dish, but chefs this weekend use frivolous amounts in every single plat – and in the streets the fragrance lingers. 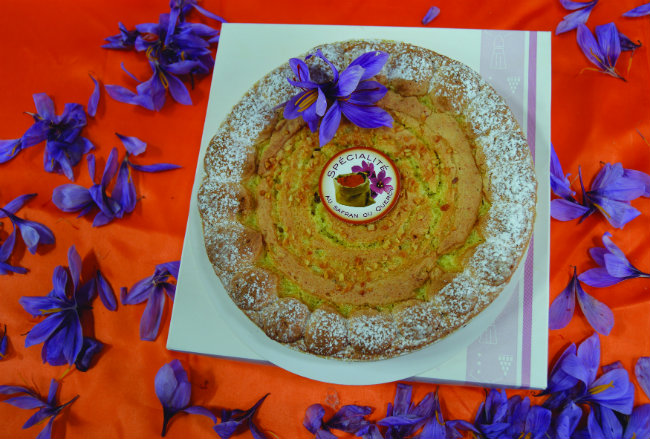 “A real farmer’s meal,” says Didier Burg about the saffron lunch in the salle des fêtes. This highlight has attracted over 200 people – locals and also guests from much further afield. It is a traditional menu: bread soup as a starter, pig’s trotter for the main course, symbolising the poverty of the region. The pig’s trotter, served with rice and boiled potatoes, is not for the faint-hearted – a mass of bones, fat, meat and jelly after hours of simmering – but the visitors are excited. We soon understand why: there is an extra treat: the saffron sauce in which the trotters bubble is truly delicious. How often do you come across something on your plate you will never forget because the taste is so incredibly good: aromatic, rich, robust. In the soup, the hot pot, and in the flan after: saffron everywhere– used in different ways, but each dish a serious treat. It is served with a young wine, heavy and full as you may expect this close to Cahors and supplied by a local wine grower who is applauded by the dining crowd.

The products at the saffron market next door include a sirup to flavour sweet and savoury dishes with liqueur (Safranille), sheep’s cheese, cakes, chocolates… all with saffron. Also bulbs, so you can grow the precious flower yourself at home. They soon sell out. Little pots are sold with 0.1 grams of saffron, approximately 45 stigmata, enough for a good sauce, sorbet or a lamb stew. Slightly larger pots (0.3 grams) are €12, enough for a meal for 12 people, which is €1 per head. “So there is no reason for restaurants to charge silly money for a saffron dish,” experts warn. In Cajarc, they don’t. 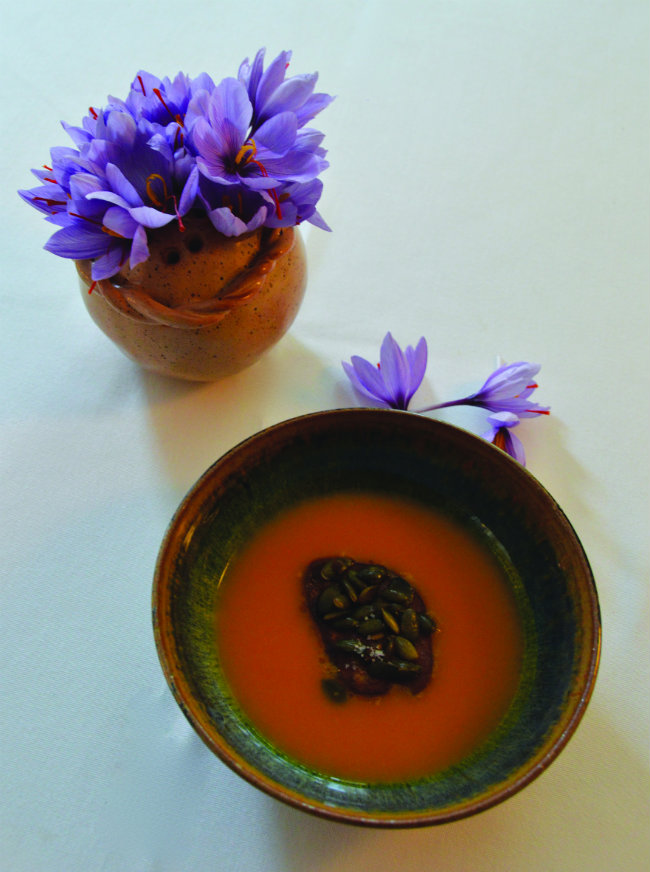 Saffron Essentials: Where to try it, buy it and how to cook with it…

French chefs say: Use whole saffron stigmata (not powder). Soak for at least for 4 hours in hot water or stock. Add to the dish of your choice briefly before serving. Simmering diminishes the flavour. Don’t use a wooden spoon: saffron sticks to wood and every bit counts. 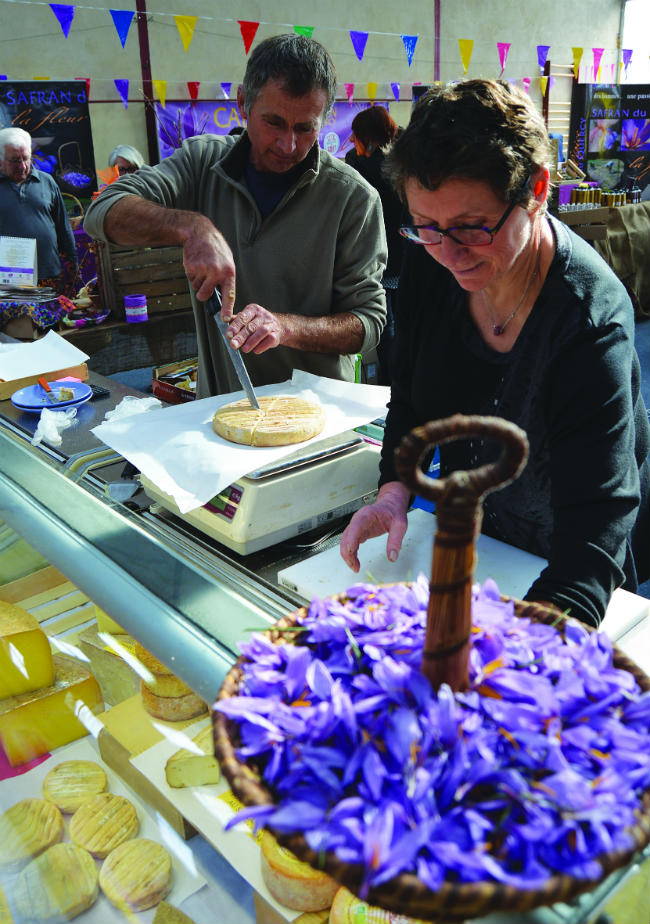