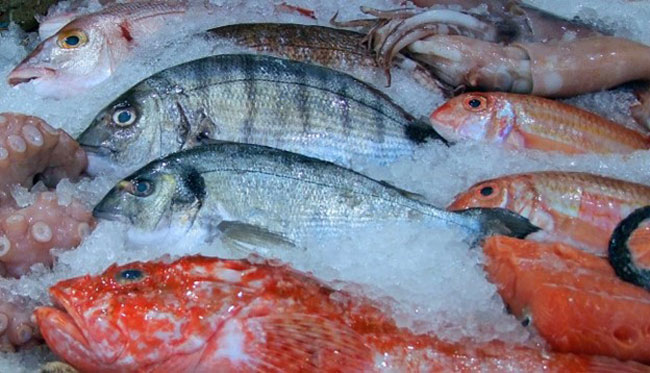 Navigating a French restaurant menu can be challenging, but knowing just a few words can help. For example, boeuf is beef, porc is pork, and poulet is chicken. There are not many words for meat, and knowing them can help you decide what to order.

But what about fish? There are so many kinds and they each have a different name. Sometimes the French names are so different from the English names, you don’t know if you are looking at fish or fowl.

Here’s a handy guide to help you out, with 10 of the fish you’ll often find on a French menu. They are all delicious!

This is a delicious fish with delicate flesh. It is so tasty it is often served whole, simply grilled with something like fennel seed and lemon. You will also find its cousin Loup de Mer / Mediterranean Sea Bass on menus in southern France.

Cod was once the most popular fish in the world, and you still see it on a lot of menus. It is so mild that it’s usually served with some kind of topping to add flavour, like tomatoes and olives.

A variation is Morue / Salt Cod, where the fish is salted and dried to preserve it, then soaked and reconstituted when you are ready to eat. Morue is the centerpiece of le grand aïoli, the traditional Friday meal in Provence.

Daurade is similar to loup de mer, delicate and flavourful, and is so good by itself that it is rarely served with a sauce or topping. Try it grilled whole (let the waiter debone it for you) or as filets.

This is a very firm fish with a delicate flavour. Halibut cheeks (joues de flétan) are a delicacy.

Lieu comes in two varieties, lieu noir (black pollack) and the rarer and more expensive lieu jaune (yellow pollack). It is similar in taste to cabillaud (cod) and eglefin (haddock) and is known for having fewer bones than most fish.

This is one ugly fish! It is never served whole — that gruesome head is always removed, so it is sometimes shown on a menu as queue de lotte, or monkfish tail. Its firm, almost chewy texture and rich flavour have earned it the nickname “the poor man’s lobster.”

Merlu is a mild and delicate fish that flakes easily. It has a slightly sweet taste and is usually served as a filet.

Unlike the Pacific salmon common in America, this is usually sourced from Scotland or the North Sea, or sometimes the Atlantic Ocean. If you want to be sure to have wild salmon instead of farmed (saumon d’elevage), ask for saumon sauvage.

A common preparation is tartare de thon (raw minced tuna with spices added). If instead you are hankering for a tuna fish sandwich, you can always get canned tuna at the grocery store and make your own!