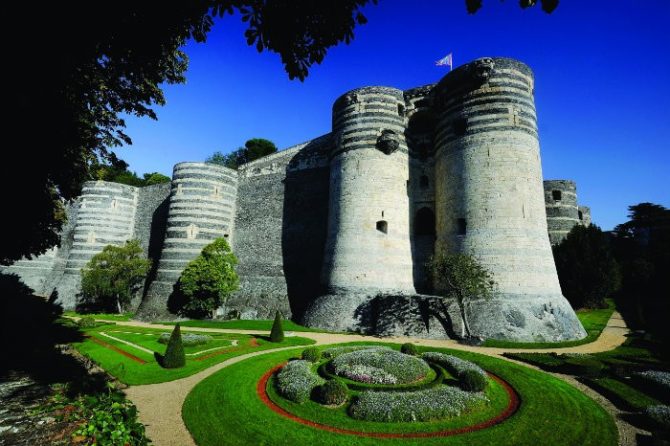 Angers is sheer delight, la douce France at her best. Handsomely situated along the Maine tributary of the Loire, Angers is luminous and laid back, indulging in splashes of flowers and numerous gardens. They claim it’s the greenest city in France. Blessed Angers has somehow managed to resist the assault of concrete high-rises and to strike a balance between urban vibrancy and a provincial pace. Angers has the further advantage of having a compact centre. Deservedly listed as a Ville d’Art et d’Histoire, most of the city’s historical and cultural sites are situated in its centre, within walking distance of each other.

Rising on a bluff, the awesome Château d’Angers overhangs the Maine, with its drawbridge and 17 turrets. Its moat and ramparts boast lovely gardens and the courtyard a value-for-money restaurant. The museum tells the Château’s story, which starts in the 13th century, when the early Plantagenets made it their home. And since we’re celebrating the bicentenary of the Battle of Waterloo, you may be interested to know that the Duke of Wellington trained here when the Château was a military academy.

Yet, rather than the Château, it is the tapestry hanging inside, l’Apocalypse, that catapulted Angers to fame. Measuring 103 by 4.5 metres, and in six sections, it’s the world’s longest tapestry and covers the walls of an entire gallery built to display it in 1954. Commissioned by Louis of Anjou in the 14th century, it depicts the battle between good and evil, as reported in the Book of Revelation.

Out of the tapestry’s 90 original scenes, 71 have survived, which is astonishing, considering that it was ripped apart during the French Revolution and used as floor mats, among other things. Fragments were later recovered in the horse stables. Whether the tapestry hung in the Château early on remains a mystery, but in 1480 René of Anjou, who was born therein, bequeathed it to the city, and from then on it was kept in the Cathédrale Saint-Maurice d’Angers, an early gothic monument with beautiful stained glass windows. Popularly known as ‘Bon Roi René’, he was the King of Naples but never reigned in France. You could spend hours scrutinising the tapestry, figuring out the attributes of goodness versus wickedness, delighting at the sight of the abominable Whore of Babylon riding side-saddle on the seven-headed lion or, shockingly, holding a mirror to her face.

Fast-forward to the Jean Lurçat and Contemporary Tapestry Museum, where hangs the equally stupendous, ten-piece tapestry Le Chant du Monde, created by Jean Lurçat between 1957 and 1965. The museum is set up in the medieval Hôpital Saint-Jean, which has a lovely cloister. It’s situated in La Doutre, the neighbourhood which lies across both banks of the river (outre La Maine), hence its unusual name. You’ll be overwhelmed by Lurçat’s 500sqm masterpiece, just as he was in 1937, when he discovered L’Apocalypse. Two decades years later, he transposed its message to his own postwar era, giving vent to the ultimate horror of the atomic bomb but, ultimately, putting his faith in the power of life.

The exhibition, Tapisserie? De Picasso à Messager (Tapestry, From Picasso to Messager), which runs at the museum until October 31, is also highly recommended. It follows the evolution of woven art over the last half of the 20th century through works by the likes of Picasso, Braque, Sonia Delaunay, Louise Bourgeois and other more contemporary artists.

Museums and historical buildings mingle with pleasant streets, some quiet, others busier – Rue Saint Laud for example, once the Roman cardo, the main north-south thoroughfare, is now alive with a youthful buzz. Whether you explore the old neighbourhoods on your own, or even better with one of the guides recommended through Angers Tourist Office, be sure to wear appropriate footgear as some of the old streets are cobbled.

Some 40 half-timbered houses have survived, among them the home of apothecary Simon Poisson on the Rue Beaurepaire. Notice the four allegorical figures carved on its façade, in praise of his admired wife: friendship, generosity, science and magnificence. And if you thought that the Manneken Pis sculpture deserves a detour to Brussels, you’ll revise your opinion when you spot ‘Père Tricouillard’ climbing up the Maison d’Adam on the Place Saint-Croix, trousers dropped, bare bottom and all. Fantasy and a saucy sense of fun prevail on many of the buildings, even the churches.

The most resplendent of Angers’ townhouses is that of former mayor Jean de Pinsé – it’s an early Renaissance stone mansion that houses the Musée Pincé, which is currently undergoing interior renovation. Its art collection is housed, temporarily, in the neighbouring Musée des Beaux-Arts. Close by, the Galerie David d’Angers, luminous under its glass roof, brings past celebrity alive in stone form – particularly the French sculptor’s 19th-century contemporaries, who are gathered there in a Madame Tussaud’s-ish manner.

Angers’ tramway will take you further afield, through the Place du Ralliement, the city’s hub, with its bustling cafes and Le Grand Théâtre. The tram runs to the Terra Botanica, an amazing theme park that celebrates nature with a unique level of inventiveness that will keep all ages entertained for the day.

Angers is a great place to experience l’art de vivre, as it’s awash with vins d’Anjou. It’s also the birthplace of Cointreau and the No 6 bus can drop you off for a guided tour of the current distillery, at Saint-Barthélemy-d’Anjou on the city’s periphery – it’s a beautiful place that’s definitely worth a visit. Enjoy a delicious local sandre au beurre blanc (fish in butter sauce) at À La Pointe in nearby Bouchemaine, facing the meeting point of the Loire and the Maine, washed down with a glass of Savennières from Angers’ nearest vineyard. Those on a generous budget may consider idling at the heavenly Château de Noirieux, a Michelin-starred establishment run by Relais & Châteaux.

Finally, if you can make it to Angers for the second weekend of September, join the crowds for the Accroche-Coeurs street festival of performing arts.

Thirza Vallois is the author of Around and About Paris, Romantic Paris and Aveyron, A Bridge to French Arcadia. Visit her website here: www.thirzavallois.com