In Memoriam: World War I 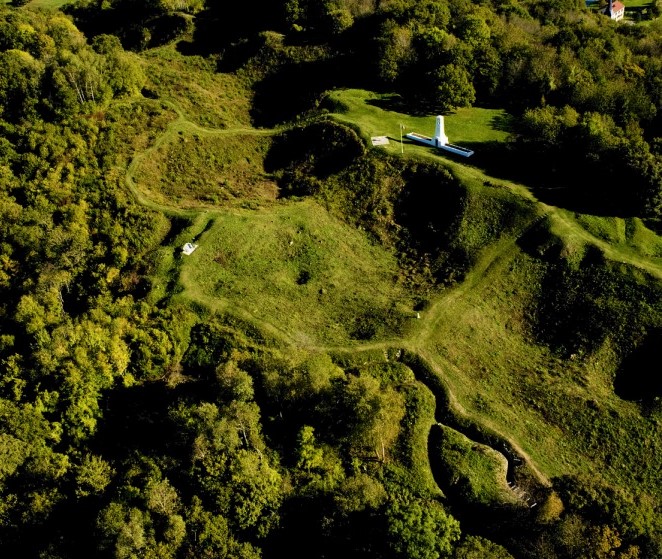 Across northern France, from Picardy to Lorraine, cemeteries and memorials mark the battlefields of World War I.

It was the first global war, sparked off by the assassination, in Sarajevo, of the Archduke of Austria. Through a domino-like chain of alliances, within weeks it exploded into a worldwide conflagration. The main players, Germany and France, had a bellicose history going back to Louis XIV. Calling for revenge after the loss of Alsace and Lorraine, the French disregarded the fact that the Franco-Prussian war of 1870 was started by their own Emperor Napoleon III. On August 3, 1914, it was Germany that began, making northern France the pyre on which millions of soldiers from all over the world would throw away their lives.

Confident of a swift walkover, French poilus—the slang term for infantry men—headed for Paris’s Gare de l’Est railway station in colorful 19th-century uniforms. By early September the Germans were at the gates of Paris, held at the river Marne by French and British troops, a standoff that resulted in half a million casualties. That was the First Battle of the Marne, where illusions were shattered and the scene set for a four-year inferno that cost 15 million lives and left 20 million wounded.

A visit to the remembrance sites of World War I is a pilgrimage along humanity’s way stations of sorrow, set against a vast expanse of tranquil farmland and meadows bathed in a silvery light borrowed from Dutch and Flemish paintings. Visitors today are hard pressed to imagine here the deafening roar of the cannons, the cataclysmic desolation, the villages eradicated from the map, or Rudyard Kipling searching desperately for his son’s remains in an empty field.

The city of Verdun sits astride the river Meuse, in Lorraine, some 160 miles east of Paris. For visitors leaving from the Gare de l’Est, the tone is set by the allegorical statue of Verdun atop the eastern facade and, in the departure hall, American artist Albert Herter’s painting, Le Départ des Poilus. The battle for Verdun (Feb 21–Dec 21, 1916) totaled 700,000 casualties, with 300,000 dead or missing. Outside the city, the Douaumont Ossuary affords panoramic views of the battlefields from its 150-foot-tall tower. Below, the scale of the carnage is only hinted at by the 15,000 graves—a number dwarfed by the bones of some 130,000 unidentified combattants in the Cloister. In Verdun’s underground Citadel, a series of holograms narrates many moving events, including the selection of the Unknown Soldier now resting beneath the Arc de Triomphe in Paris: standing behind eight aligned coffins and after agonized hesitation, the soldier assigned the task selected the sixth, the sum number of his 132nd regiment.

Americans troops entered the war in early 1918. The Meuse-Argonne offensive, in the Argonne forest (Sept 26–Nov 11), was their biggest operation and victory, in which Sergeant Alvin York became a national hero (played by Gary Cooper in a 1941 movie). The Montfaucon American Monument commemorates the offensive. Behind it, the ruins of the village church make words redundant. The Meuse-Argonne Cemetery and Memorial, northeast of Verdun, is the largest American cemetery in Europe, with 14,246 graves (the WWII cemetery in Colleville-sur-Mer numbers 9,387). Seen from the chapel, the endless expanse of white crosses and the sense of measureless sacrifice is overpowering.

Ties with the US here are ongoing: a memorial to the 42nd Rainbow Division was unveiled outside Verdun on Nov 12, 2011 and last September General Pershing’s birthplace—Leclede, Missouri—was twinned with the nearby village of Souilly. Situated on the Voie Sacré, the “sacred route” that supplied Verdun from Bar-le-Duc, Souilly housed Pershing’s headquarters, in the town hall, where Pétain’s office is still preserved and can be visited.

In Picardy, north of the Somme River between Arras and Albert, the Battle of the Somme (July 1–Nov 18, 1916) placed British and Commonwealth troops on the front line. It was launched at 7:28 am with a series of bomb explosions leaving enormous holes, like the 98-foot-deep Lochnagar Crater near La Boisselle. The British “Tommies” were largely volunteers, but the Germans were professionals, solidly entrenched in the ridges above the Ancre and Somme rivers. Casualties surpassed those of Verdun, deeply marking Britain, where the emblematic poppy of the battlefields is still donned on November 11, known in Britain as Remembrance Day. A small tourist train from Froissy to Dompierre now plies the narrow tracks laid to move equipment to the front (the train runs May–August, and is pulled by a steam engine on Sundays). The Historial de la Grande Guerre in the Château de Péronne and Musée Somme 1916, in the tunnels of Albert, vividly portray the soldiers’ lives underground and in the trenches.

Thiepval, the Somme’s largest memorial, commemorates the 73,367 British and South African dead, among them 14-year-old Reginald Giles and Major Cedric Charles Dickens, the writer’s grandson. The nearby Ulster Tower honors the Northern Irish troops, and beautiful Delville Wood, near Longueval, is for more South Africans. Out of 3,200 combatants at Delville, only 143 came out unscathed from the forest they renamed Devil’s Wood.

The Newfoundland Memorial in Beaumont-Hamel, between Albert and Arras, displays a bronze caribou, the Newfoundland Regiment’s emblem. The trench line has been preserved, though regenerated nature now softens the horror: in some 30 minutes, virtually the entire regiment was mown down. Pozières commemorates 23,000 Australian casualties during a 45-day battle for one German observatory installed in the village windmill. It was the only Allied victory recorded in the Battle of the Somme, and the first time tanks were used. Nearly a century later, Butterworth Farm at Pozières is a B&B named after the promising young English composer George Butterworth who died nearby.

The coal mining territory of northern France—Flanders and Artois, now the Nord-Pas-de-Calais region—was the country’s most ravaged, and the international involvement here is striking. The Wellington Quarry in Arras, one of several linked up by New Zealanders, offers a glimpse into the claustrophobic intimacy of their lives 65 feet underground, and a film conveys the devastating shock of the battle. Vimy Ridge, still honeycombed with trenches and craters, was captured by the Canadian Expeditionary Force on April 12, 1917. It was the first time all four Canadian divisions fought together, and a feat that led to Canada’s independence. Canadian sculptor Walter Allward’s extraordinary monument towers above the vast plain, its central maternal figure, Canada Bereft, looking down to a vast coffin representing Canada’s 11,285 dead. The Czechs, Poles, Portuguese, Indians, even Chinese farther afield—all have nearby monuments.

The French cemetery and ossuary Notre Dame de Lorette, near Arras, is the largest French necropolis, commemorating 40,000 soldiers, some of them Muslim. The largest German cemetery in Europe, Maison Blanche, at Neuville-Saint-Vaast shelters Jewish graves among its Christian crosses—all were then brothers-in-arms. The British Commonwealth’s Trou Aid Post cemetery at Fleurbaix contains 356 headstones, brushed by roses and shielded by weeping willows.

The departement of Aisne, northeast of Paris in Picardy, and the bordering area of the Marne witnessed several American engagements. Le Chemin des Dames, a narrow ridge north of the river Aisne named after Louis XV’s daughters, was fiercely fought for, as illustrated in the Caverne du Dragon underground museum. The Yankee Division fought here in early 1918, leaving moving traces of their presence in the quarries. The French remember Le Chemin des Dames mainly for the catastrophic battle of 1917 that led to mutinies and 28 executions. The anti-militarist Chanson de Craonne, relating the events, was censored until 1974.

The American entry into the war determined its outcome, boosting morale and compensating for the Russians’ withdrawal after their 1917 revolution. It was on the battlefields of France—like those here at Château-Thierry and Belleau Wood—that the “doughboys” were shaped into what became the mightiest army of the 20th century. Among those fighting in the Aisne was pilot Quentin Roosevelt, Teddy’s youngest son, whose plane went down near Chamery. A fountain in the village honors him, as does a shrine in the field where his plane crashed and he was first buried. His remains were later transferred to Colleville-sur-Mer in Normandy, alongside the grave of his brother Theodore Jr. who died in 1944.

The Rainbow Division, made up of National Guard units from across the US, fought at Seringes-et-Nesles. (It was named Rainbow by its then Chief of Staff Douglas MacArthur, who said the division would “stretch over the whole country like a rainbow”.) Among the 6,012 graves at the nearby Oise-Aisne cemetery is that of Native American Foster Decorah, who joined the army to obtain US citizenship. Black Americans served in separate divisions (the 92nd and 93rd) and were brigaded with the French army, and eventually their insignia included a shoulder patch depicting the French Adrian helmet.

Belleau Wood, north of Château-Thierry, is where the US Marines first made their mark, and where their legend was born, although most of the troops in the battle were infantry doughboys. The lovely woods shelter vestiges of the battle and a chapel, embracing the adjoining cemetery with 2,289 graves. Outside Château-Thierry, above the Champagne vineyards and the Marne Valley, the stately Côte 204 Monument commemorates the French and Americans who fought in summer 1918.

There were also heroic American women who came over to help, with banker J.P. Morgan’s daughter Anne in the lead. In 1917 she founded the American Committee for Devastated France (CARD) and set up her headquarters in the early 17th-century Château de Blérancourt, near Soissons. She organized ambulance relief and aid for both soldiers and civilians, opening hospitals and creating agricultural and educational programs, and adopted as CARD’s symbol Blérancourt’s heraldic griffin. Today the château houses the Musée Franco-Américain, closed for renovation until 2014, but Anne Morgan’s restored apartment and the library are open to visitors, as are the ravishing gardens. The Hostellerie Le Griffon, outside the gates, offers an opportunity to linger longer.  After the heart-wrenching journey through the battlefields, the lovely surroundings provide an appeasing, redemptive harbor.

Thirza Vallois is the author of Around and About Paris, Romantic Paris and Aveyron,  A Bridge to French Arcadia. website

Michael St. Maur Sheil is a photojournalist who has traveled through more than 60 countries working for major publications including Time, The New York Times and National Geographic. For the past four years he has been shooting a photographic essay, Fields of Battle: 1914–1918, documenting the World War I battlefields as they are today. The complete project will be presented in a series of exhibitions in 2014. Sheil was recently elected to the prestigious British Commission for Military History and is currently in demand as a guide to the battlefields, relating the history of the war that he continues to commemorate through his dramatic landscape photography. To see more of his superb work or find more information about his tours: www.westernfrontphotography.com or [email protected]

A participative ceremony at the Meuse-Argonne cemetery, in Meuse Lorraine.

As night falls, over 14,000 candles will be lit at the Meuse-Argonne cemetery at Romagne-sous-Montfaucon, in remembrance of all American soldiers.

Volunteers take up positions at various crosses, each next to a specific grave, whose history they will share with any visitors who stop to look.

This event will honour the promise made by General Pershing: “Time will not dim the glory of their deeds”.

Originally published in the November 2011 issue of France Today; updated in November 2012