A walk through the “High Town” of Limoges 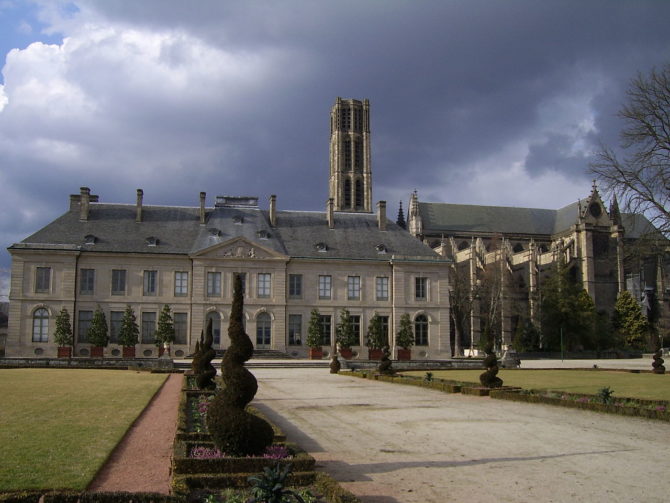 The city of Limoges over the centuries developed far more around the Chateau than the actual city centre. A walk through the “Ville haute, the high town” of the region’s capital or as it’s commonly known today – the “old town” reveals its rich history…

The ‘place de la Motte’ is the ideal starting point to infiltrate into the intimacy of the “high town”. The Hall is situated in a pretty square, the building itself incredibly attractive with its blue lines and windows, clear paving and red bricks, spot lights embedded in the ground, and laser beams accentuating the invigorating Halls dating back to the end of the XIXth Century. The Hall gave way to the Dupuytren market, which completely transformed the ‘place Carnot’, where smaller halls were built. Becoming the heart of the city, the smaller halls were raised with a porcelain frieze containing 328 windows, all decorated differently. Amongst the hustle and bustle of these halls can be purchased a variety of different local produce, meat, fish, fruit and vegetables and there are even several restaurants with alluring complicity.
Opposite the market stalls is the famous ‘trompe-l’oeil’, which captivates the moment (the atmosphere of the old fashioned markets) and allows you to take in the metamorphosis of this ancient area. The market, which spreads from the places de la Motte, to les Bancs and the rue Haute-Vienne, runs over the cities ancient water reservoir.

Today the reservoir has been transformed by the Limousin aquarium and is a place where fish from warmer seas and tropical environments can be discovered. The ‘high town’, which shelters ancient buildings and first-rate monuments such as the two gothic churches Saint-Michel and Saint-Pierre, are always guaranteed to get the heart pounding.

The gems to discover

The centre of the city is encircled by boulevards running from one square to another, which in the XVIIIth century replaced the ancient city walls. Six steep cobbled streets join the high part of the city with the lower part of the regional metropolis. The heart of Limoges is structured around the Jean Jaurès road, which opened at the beginning of the XXth century and the place de la République, which in the sixties was remodelled.

There is a sense of mystery, calm, ecstasy and dizziness within the heart of this ancient part of Limoges. The legendary quarters known as the “quartier de la Boucherie” are situated at the very centre of the ‘high town’. These quarters are famous for their tall wooden houses and the chapelle Saint-Aurélien. Opposite the cathedral at just a stones throw are contemporary enamelled artists’ work where vases, cups and plates can be found. From the XIVth century mostly butchers and their families lived in this area of Limoges. Nowadays the area has a more creative feel, with an abundance of art shops, libraries and antique shops.

It is inevitable when visiting the ‘high town’ of Limoges to stumble upon the Cour du Temple, an enclosed and peaceful paved courtyard. Within the grounds of the Cour there is a sense of serenity and the archways, balconies, stone pillars, curves and large steps create an intimate and beautiful environment. The ancient hotels scattered around the Cour du Temple situated between the Rue de Temple and the Rue du Consulat must not be missed. The most recent date back to the XVIIIth century when these beautiful tall three story buildings were built in timber with wooden stairs.

L’église Saint-Michel-des-Lions can not be missed as it is easily found due to the famous bronze ball which sits on top of the 65 metre tall church spire. The church with its beautiful stained glass windows dates back to 1364 and took over a century to build. The Church treasures three of the patron saints of Limoges, Saint Martial in a golden shrine, sainte Valérie whose head was cut off and saint Loup who is celebrated every year during a festival.

The ‘high town’ of Limoges is captivating, beautiful and mysterious with an abundance of ancient architecture and history. The rue du temple, an aristocratic road, the discreet rue de Gorre, the rue Ferrerie and many more are certainly worth taking a stroll along and discovering.