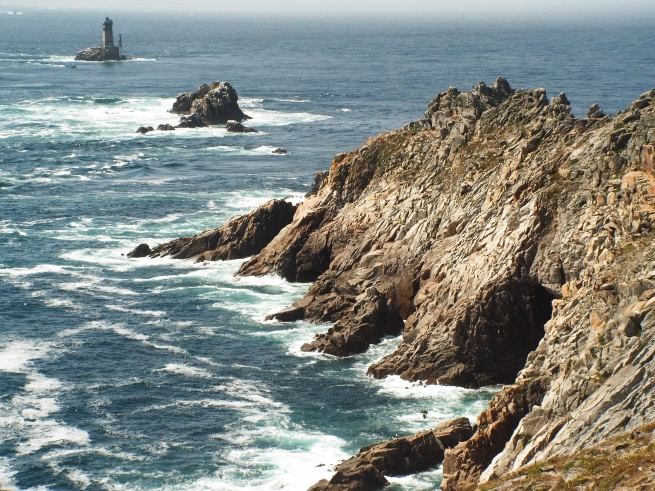 The department of Finistère – the name is derived from the latin finis terrae meaning “end of the earth” – is the northwestern tip of Brittany. The region’s appeal is year-round – visit the seaside resorts, beaches and coves in summer or explore the region’s rich historical and architectural goodies out of season.

Dotted amongst the cliffs and headlands of Finistère lie some of France’s greatest ports. Morlaix, with its part-medieval old town, is especially charming, while Roscoff is familiar to ferry passengers and Douarnenez a must-visit for seafood lovers.

The region’s largest town is a port that played a famous role in recent French history – Brest is not only a commercial port, but was also a key naval base during WWII. Today it is a thriving, bustling university town which pays homage to its maritime past with superb museums like the Musée de la Marine.

Quimper is the oldest of the Breton cities, dominated by the huge, Gothic Cathédrale St-Corentin. It’s around this magnificent edifice that you will find the liveliest cafés and shops in pretty, half-timbered buildings. The city is known for its faience pottery, so stock up on earthenware bearing local “folk” designs.

Finistère boasts some uniquely Breton religious buildings, none more enchanting than the parish closes (enclos paroissiaux – walled churchyards with calvary, ossuary and cemetery). The best can be found at Lampaul-Guimiliau, St-Thégonnec and Guimiliau.

Explore off-shore islands such as windswept Ouessant and peaceful Ile de Batz by taking a ferry from the mainland.

Can there be any greater gastronomic pleasure than sitting river- or sea-side in Finistère – perhaps in pretty Le Conquet or Concarneau – before you a huge mound of ocean-fresh fruits de mer? The seafood is, understandably given the abundance of fishing ports, some of the finest in France.

Passion for local heritage and identity is fervently upheld in Finistère. From Breton language roadsigns to the black and white flag fluttering from village flagpoles, the area is a hotbed of centuries-old customs and culture fighting the tide of homogeneity. In the Huelgoat Forest, meanwhile, mysterious
myths and legends of Celtic origin abound…

Not only is local cultural heritage celebrated through the year (there is the Mardi Gras in Douarnenez in February, the Festival de Cournauille in Quimper in July and the Atlantic Jazz festival in Brest in October) – but for the youngsters there is July’s huge, musically eclectic Vieilles Charrues gathering.

It’s not just fish that land on your plate here – the region is equally famed for its delicious seasonal produce, such as artichokes, strawberries, cider and honey.