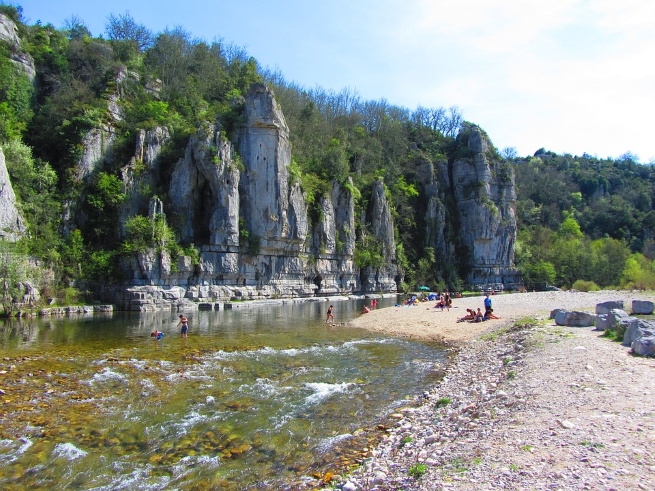 When you need to recharge your batteries, look no further than the unspoilt Ardèche countryside. This picturesque, lush and wild département in central-southern France is a tapestry of ancient grey rock, verdant hills and thick forests. Heavily loaded with history and tradition, the sparsely populated Ardèche region is the perfect place to lose yourself in the simplest pleasures that rural France can offer, namely hearty regional fare and untamed beauty.

The Ardèche really does make the best of what nature has given her. Privas, the peaceful administrative capital of the Ardèche is the most convenient base from which visitors can explore the area, but it also has a lot to offer in its own right. The town was a Protestant stronghold during the Wars of Religion in the 16th century, but was pillaged and burned by Louis XIII in 1629. The Protestant memory lives on, however, in the Musée du Vivarais, a few miles out of town. Here, visitors can relive the history of the Huguenot resistance, which dominates the Ardèche’s identity to this day.

A great place to spend a few hours upon arrival in Privas is the impressive Musée de la Terre Ardèchoise, which offers the chance to relive the aforementioned siege. It also provides the opportunity to swot up on the Ardèche’s other great visitor attractions, namely its prehistoric monuments. 30 million years of history and endless stunning scenery are ready to be explored, and a visit to the museum is a vital precursor to heading off into the countryside to marvel at the many preserved sites in the area.

For a memorable taste of the region’s key role as a hotbed of prehistoric civilisation, head for the troglodytic caves at Montbrun, south of Privas. Put on your walking boots and follow the trail that leads to these astonishing, centuries-old hillside dwellings.

At Soyons, meanwhile, you will find an amazing 74-acre archaeological site that chronicles 150,000 years of history, from Neanderthal man to the Middle Ages. The most exciting discovery of recent times, however, is the Chauvet Grotto at Vallon-Pont-d’Arc. In 1994, more than 300 prehistoric animal drawings – in shades of ochre, red and black – were found on its rocky walls. Completed 30,000 years ago and predating the paintings at Lascaux, the collection can be seen at the Chauvet-Pont-d’Arc exhibition.

The town of Vallon Pont-d’Arc is also a good place to start exploring the great outdoors of southern Ardèche. There are many designated trails and walks and not to be missed is a stroll along the gorgeous Gorges de l’Ardèche (local gorges). One vital stop-off point (there are 12 designated panoramic viewing spots along the path) on the way to Saint-Martin d’Ardèche is the spectacular Pont d’Arc, where the river flows under an enormous natural arch. Thereafter, the river twist and turns in a thrilling combination of 25 rapids and gently flowing water that make the gorge perfect for canoing and kayaking. The Ardèche Mountain to the east of the départment is another walking area with striking views, boasting over 256km of marked trails. The volcanic range here is also home to the source of the Loire river as well as the striking Ray-Pic waterfall, a geological curiosity with a 60m cascade.

For a less energetic, but equally appealing, visual treat, time your visit to coincide with the impressive hot air balloon festival that takes place each June at Annonay in tribute to ballooning pioneers, the Montgolfier brothers – Joseph and Etienne – who were born in nearby Vidalon.

Exploring rural Ardèche properly does require a certain commitment to the spirit of discovery, but the strenuous exercise involved is well rewarded by the region’s food and drink. The Ardèche is known in France as ‘chestnut country’, and, for many locals, this anonymous wintertime ingredient holds iconic status. This explains its prominence in so many dishes and the region’s position as France’s leading producer, cultivating 6,000 tonnes per year. Sampling local soups, stews and cakes containing chestnuts is all part of the Ardèche experience.
Privas is the epicentre of the marron glacé (candied chestnut) business, and it was here that Clément Faugier set up the first industrial operation back in 1882. It was a more basic process then, but, nowadays, making these confectionary delicacies involves up to 20 stages. The nuts are firstly collected and graded by size, then peeled thoroughly. Next, they are enveloped in before being sprayed with icing sugar and oven dried. Maison Faugier is the ultimate place to buy some sweets and other chestnut products, while the Museum of the Chestnut Grove in Joyeuse is a fun place to learn about the chestnut tree’s role over the years.

There is much more to the Ardèche’s cuisine than chestnuts, although its classic dishes are by no means cutting edge. Most have a rustic, peasant feel that reflects the region’s self-sufficiency. La bombine is a garlicky potato gratin served as an accompaniment to delicious red wine-based stews, which may contain pork or goat. Pâtés and hams are good in the Ardèche too, as are the creamy goat’s cheeses, the most famous of which is delicious Picodon. For dessert, much use is made of summer fruits, like the bilberries and raspberries that grow copiously throughout the countryside.

To wash down your meal, look no further than one of the Ardèche’s increasingly well-respected wines. Grenache, Syrah and Merlot vines are as common as chestnut trees and mulberry bushes in these parts and popular tipples are the appelation wines Côtes du Vivarais and Coteaux de l’Ardèche. The soils are dry and stony, producing wines of this quality takes more skill and effort here than in many other parts of France. To sample and buy, go to the roadside Caveau de Cressol in Saint-Peray.

To ensure complete satisfaction in the Ardèche, you really need only three things: a good map, a sturdy pair of walking boots and a healthy appetite for both exploration and distinctive local food. It is true that, in comparison to some of France’s other rural destinations, the Ardèche currently enjoys a certain anonymity, but, as anyone who has been there will tell you, it is one of the South’s best-kept secrets.

Take the A6 south from Paris to Lyon. From there, Privas is a straight run down the A7/E15.

The SNCF from Paris to Marseille stops at Valence and Montélimar just over the Ardèche border with the Drôme. From here, local connections are available to Privas.

Visit the showroom and boutique at the Maison Faugier marron glacé factory in Privas. Attractions include a video presentation on the history of the company and an exhibition of old tools.

For details of walking trails and outdoor adventures, visit the Ardèche Tourist Board.