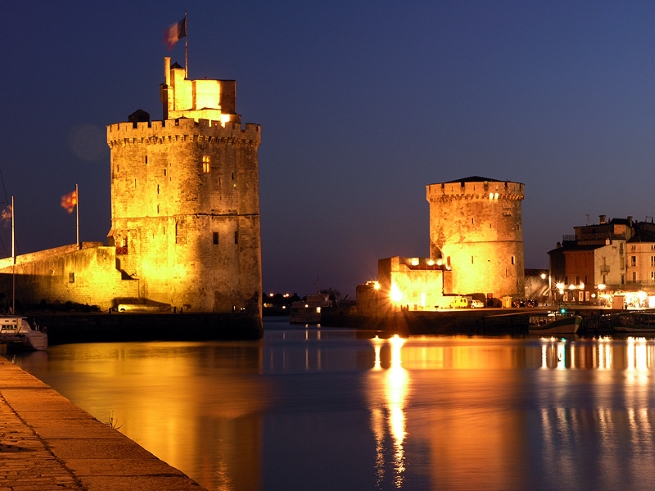 The introduction of regular low-cost flights to La Rochelle has proved a popular move and the extension to a year-round service says a great deal about the allure of the beautiful département in which this charming port sits.

Charente-Maritime – only 90 minutes from London by plane – is a place whose identity is imbued, as its very name will tell you, with the spirit of the ocean. The irresistible combination of a mild climate and sea air, rich historical interest and tempting seafood-based gastronomy, all of which owe a debt to the Atlantic, contributes to the visitor’s overwhelming sense of well-being. Hardly surprising, then, that the aircraft from Stansted seem to be always full.

La Rochelle was just a tiny fishing village 1,000 years ago – its name means Little Rock – but grew into a major port thanks to the export of local salt and wine to Northern Europe. Low tides mean the Old Port is devoid of water twice a day, so a commercial port has been built a few kilometres away to service the trade in fish and timber. At the Port de Plaisance, meanwhile, the 3,600 sailing boat moorings (the largest number on the Atlantic) point to a town whose people love the sea and know how to enjoy it. In town, the unusual arcaded streets make for great leisurely shopping, with everything from antiques to high fashion on offer. Saturday is a busy market day and the side streets around the historic market place become awash with fresh produce and bargain-hunting hordes.

While its protestant heritage means that the town has little in terms of enchanting church architecture, there is always the attraction of the colombages – timber-framed houses covered in slate – which are unique to La Rochelle. Not to be missed is the restored Café de la Paix, a grandiose 19th-century brasserie on Place Verdun, which novelist, Georges Simenon visited regularly during the occupation. Order a coffee, sit back, take in the atmosphere and watch this lovely town go about its business.

At Chez André, the labrynthine restaurant found portside at La Rochelle, local pleasures are savoured in the form of the catch of the day. After tasting the fish soup, you may be forgiven for thinking that the chef has bagged and patented the essence of the sea just for you, while the sole meunière alone is worthy of the plane fare. And like a heaven-sent fish relay, Charente-Maritime’s oyster season begins in September, just when the mussel season ends. Both should be sampled in situ at one of La Rochelle’s countless first-rate eateries. The classy, local recipe-orientated L’Estran by the canal is one such place, and the Ile de Ré across the water has many great restaurants.

During summer months, sun-worshipping visitors to this part of the Atlantic Coast have 250km of sandy beaches to choose from. La Rochelle has two artifical beaches, though the resorts of Châtelaillon-Plage, Saint Georges de Didonne and Royan along the coast are better options. Clean, expansive and pretty, they are perfect for family relaxation, while the beach at Pontaillac has a surf club for kids. Indeed, there are countless activities for children of all ages in Charente-Maritime. Very popular spots are La Palmyre Zoo and L’Aquarium at La Rochelle, which both provide stunning insights into the natural world as well as an educational perspective.

Adults in need of some pampering can, meanwhile, relax at one of the region’s six Thalassotherapy centres. The charming town of Rochefort, a short drive from La Rochelle, is packed with places that should be visited. Situated 20km from the coast on the banks of the River Charente, Rochefort is home to a rope manufacturing museum and former military arsenal, called the Corderie Royale, and is also the site of an ambitious reconstruction of the 18th-century frigate, Hermione. Those seeking tasty, good-value sustenance after so much seafaring folklore should try the Café des Longitudes next door. The lively lunchtime ambience is matched by good food and a mouthwatering selection of locally made ice-creams.

Rochefort town centre boasts three of the most quirky places to visit anywhere in France. The former home of the eccentric writer, Pierre Loti, provides a fascinatingly bizarre step back in time. From his travels around the world he brought back all manner of mementos with which to transform his house into a kind of fantasy microcosm. The result is a mesmerising house, with one room a turkish lounge, another a mosque and another a Renaissance dining room. Nearby is the Old School of Naval Medicine, which houses a hair-raising collection of instruments and potions used over the centuries to cure the ills of local seamen. Not a visit for the faint hearted, but an intriguing reminder of the sea’s omnipresence in Charente-Maritime’s history nonetheless.

Yet more fun can be had at the Musée des Commerces d’Autrefois, a riveting collection of memoribilia, advertising signs and artefacts from the France of yesteryear. The former department store building houses exact recreations of a pre-war pharmacy, butcher’s shop, barber’s shop, café and much more besides. Sadly for visitors, the coffee is just pretend, so, for the real thing, head for a café on place Colbert. It was here that Catherine Deneuve filmed the award-winning musical Les Desmoiselles de Rochefort in 1964. When in Royan, leave the beach behind for a while and you will soon discover the town’s extraordinarily eclectic architecture. Just behind the seafront, the streets are lined by a mix of 1950’s modern designs – all flat roofs and square, clean white façades – and Belle Epoque villas, built when the town was the region’s main bathing resort. Also worth a look around is the town’s unusual 80m church, constructed in 1955 using v-shaped concrete pillars.

Then, why not travel inland through Cognac vineyard country to discover historic Saintes and pick up a few bottles of pineau, the gorgeous local grape juice aperitif. The surrounding Pays Royannais area proudly boasts both Europe’s largest and smallest estuaries, and up the coast from Royan on the Gironde estuary the peninsula village of Talmont, with its cliffside 13th-century church and fishing museum, rises up. The very Charentaise carrelets (fishing huts) that dot the coastline, and the troglodyte caves of Matata, offer a windswept glimpse of the region’s traditions and history.

Very tempting though it may be for some, there is much more to do in Charente-Maritime than simply sunbathe on fabulous beaches and tuck into some of the best seafood cuisine in France. Brimming with great stories and sights, as a holiday destination, this region really is a bumper package.

From Calais and other ports, take the A16 to Rouen and the A84 down to Nantes, or the N138 to Le Mans and onto Tours before taking the A10 to Poitiers and Saintes. From there, take the A837 to Rochefort.

The TGV Atlantique from Paris (Gare Montparnasse) reaches Poitiers in 90 minutes and La Rochelle in two hours and 15 minutes.

Charente-Maritime enjoys a mild Gulf Stream climate and almost as much summer sun as the Mediterranean, with Indian summers most years.