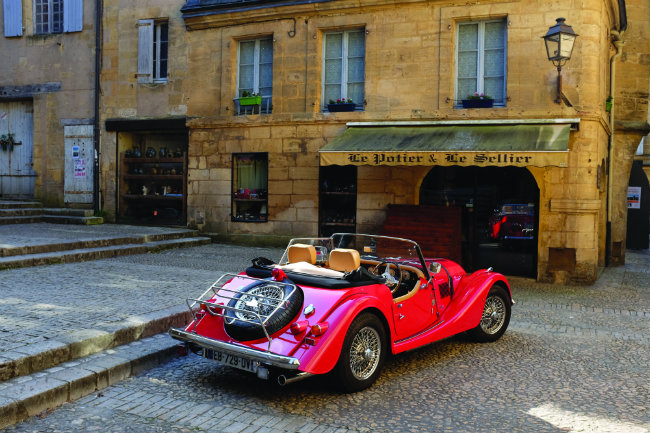 Our chariot for the next two days is waiting in the corner of a little hilltop village in southwest France, looking resplendent in gleaming cherry red and chrome. It’s a low-slung two-seater that wouldn’t look out of place parked next to an airfield in the days of the Battle of Britain, because this is a Morgan, a quintessentially British sports car with a racing pedigree dating back to the early part of the last century. This little beauty is a Plus 4, a model first released in 1950.

Somewhere in its fascinating history the Morgan Motor Company made an eccentric decision. Ignoring the future of car production espoused by other manufacturers – which involved endlessly releasing new models and designs – it opted instead to continue producing hand-built models to the same classic design. Initially the company survived thanks to a core of loyal enthusiasts who were deaf to the scoffers and doubters who mocked their antiquated coach-building techniques (even to this day the car frame is built out of ash wood). But 70 years on, it turns out there was some method in its madness; now, in a world dominated by cloned and characterless car designs, it seems that car enthusiasts are seeking something different, something individual that will put a smile back on their faces, and the Morgan Motor Company is thriving once again. So it is that the historic example awaiting us is in fact just a few years old and only has 2,000 miles on the clock! 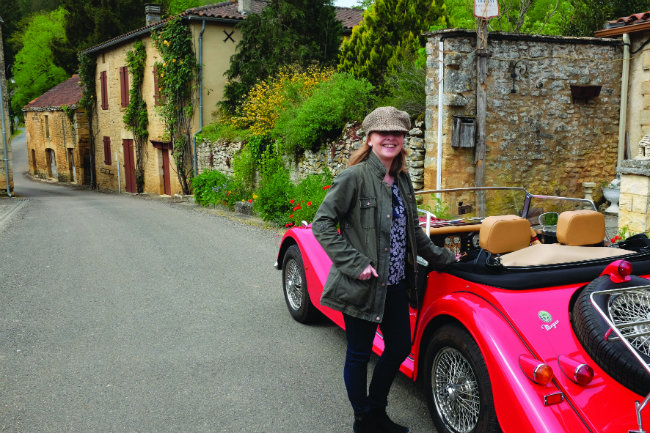 I’m a little apprehensive as Andy Sayles from CC Classic Cars runs through a long list of instructions. Will I remember to keep my foot off the clutch, to go slowly over those village speed bumps, to fold the hood up and down in the right sequence? But most of all, how easy is this thing going to be to actually drive?

Sliding into the low, snug leather seats, the first thing you notice is the driving position. The last classic I drove was an Alfa Romeo Spider and in that little demon you sat back, Italian style, with your arms straight out in front and your knees tucked up almost under your chin. But here you sit with your legs stretched out and the lovely wooden wheel is right there in front of you. Then you fire it up, blip the throttle, slip your hand over the stubby aluminum gear lever, and you see that long red bonnet stretched out in front you. It seems to say, “Come on, let’s go, just point me where you want”. This is going to be fun! 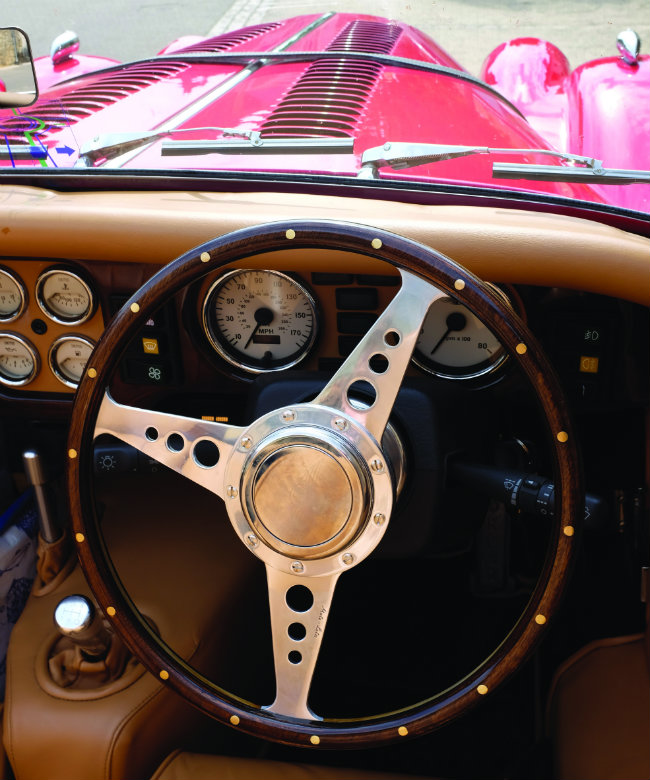 Our itinerary is pretty random: we’re heading for the Lot-et-Garonne department towards Cahors for an overnight in a château, then back into the Dordogne for a bit of caving and castling before heading into Sarlat, where I figure I can get some nice shots of the car if they’ll only let me into the vieille ville pedestrian area. In between we don’t mind much where we go – in fact we’ve nicknamed this trip ‘getting lost in southwest France’. You see, to bring maximum motoring pleasure you need two things: a fun car and the right roads. Do this in any another country and you could find yourself sitting with the hood down in a traffic queue, inhaling the exhaust fumes of a truck while tired commuters look down at your gorgeous piece of metal with a conflicted mix of envy and disdain. But here in the sleepy forests and meadows of rural France there’s always another quiet road to take you to the next picturesque village. 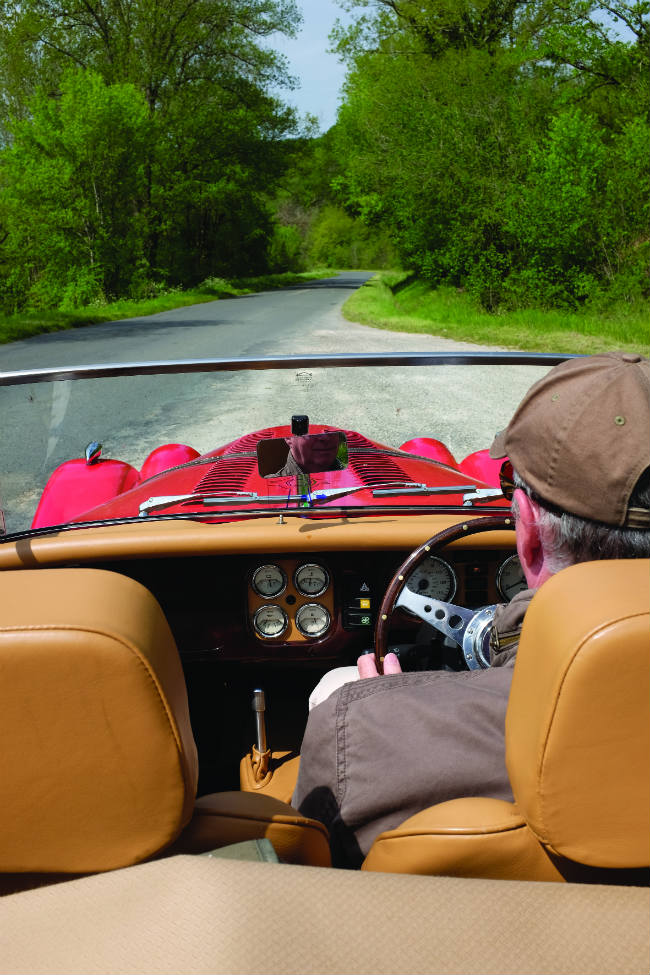 cruising the verdant lanes of the Dordogne. Photo: Guy Hibbert

The sun is shining, the factor 50 is applied, the hood is down. I’m getting used to the car quicker than I had imagined. The two-litre Ford engine is lively and the gearbox and clutch are conventional modern affairs which don’t require any special driving skills. The Morgan holds the road well and tucks into bends with relish. In no time at all we are away from main roads and winding through the cool shadows in the deep forests on the hills above the Lot river valley.

I press on a bit and start to really enjoy the driving experience. This is really driving – you can feel the car shift its weight under you as you point that sensational red bonnet towards another corner, giving it a bit of a blast as you exit. Sometimes you can even hear a nautical kind of creaking as the wooden frame adjusts to a tight bend.

You know when you’re driving something a bit special from the attention you get. Truck drivers give a blast of their horns, pedestrians wave, boys on bikes shout out loud, and when you park in town a crowd gathers. There’s a genuine enthusiasm in rural France for les voitures de collection, classic and vintage cars. It’s not unusual to come across mini-rallyes of other classics snaking their convoys through seemingly endless calm, uncluttered roads. At one point a convoy of a dozen Citroen 2CVs salute us with their horns. 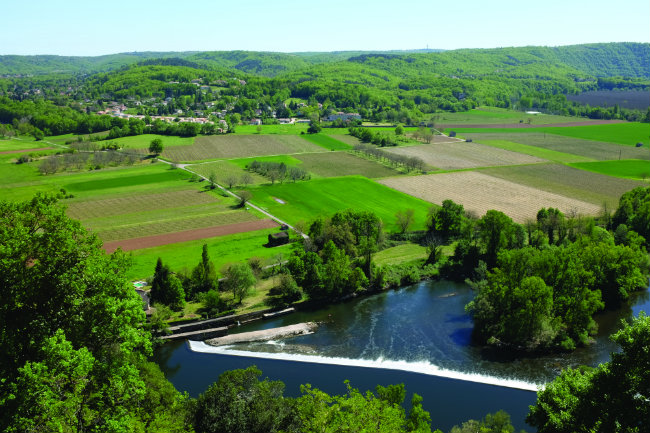 Shortly before apéro time we find our way up a rather bumpy, winding lane leading ever upwards towards our overnight stop at the Château de Mercuès, perched in a magnificent setting high above the river Lot. The Morgan looks in its element in the car park of this rather swish Relais et Châteaux hotel. I want to try and get the car up in front of the imposing château steps for a photo but it’s strictly à pied only, so I have to content myself with a shot leaving through the grand archway. This is a marvellous hotel with an impressive wine domaine. [You can read my review and wine column here and here.]

Next morning we’re back on another stunning cross country route, this time winding our way on back roads north towards the Vézère river valley and the home of cave paintings and pre-history. I’m more familiar with the handling now and don’t feel the need to be so macho with the ‘organ’ accelerator pedal (Google it!)… much to the relief of my co-pilot and navigator. 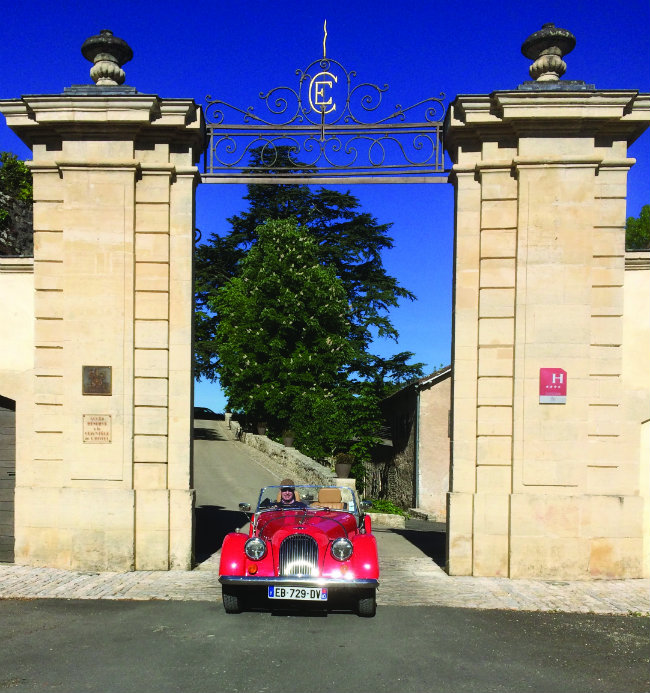 We arrive at our next port of call in good time. Le Gouffre de Proumeyssac is an underground cavern known as the ‘Cathedral of Crystal’. After all this exposure to the hot sun we look forward to the temperature in the cave which is a constant 16 degrees. When I mentioned to my other half that this visit involved a ‘gondola’ ride, I didn’t realise that she was imagining a gentle glide across an underground lake, perhaps serenaded by some passing troglodyte-troubadours.

There is in fact a gondola, but it’s the aerial type of gondola, not the watery one. Quite soon we find ourselves descending straight down into an enormous cavern. It’s all very atmospheric with just the flickering of lanterns to replicate the experience of the early brave souls who first ventured down here many decades ago. As you descend, a son et lumière show gradually reveals the vast scale of the cavern, and on the sides are illuminated the wondrous and eerie shapes of giant calcite formations created over millions of years by water dripping through fissures in the limestone. They appear out of the dark like pearlescent deep sea creatures emerging from caves in the rock. It’s a fascinating and educational experience put together with enthusiasm and professionalism – I simply cannot recommend it enough.

A short drive and we’re cruising beside the mighty Dordogne river before arriving in Beynac. The village is packed – it’s a holiday, the sun is out and everyone is making the most of the day. The gleaming red Morgan causes quite a stir as we inch through the pedestrians – we’re looking for the lane which leads up to the mighty limestone fortress of the Château de Beynac.

This wonderful castle could tell some extraordinary tales. Dating back to the days Eleanor of Aquitaine and Richard the Lionheart (who seized the castle in 1197), the magnificent location on a promontory high above the river ensured its prized status during the medieval wars. Our English-speaking guide, Benjamin Simons, does a fine job of bringing to life the primitive world of medieval lords and the fascinating evolution of the château though the Renaissance period up to its semi-abandonment in the 19th and 20th centuries, to be rescued and gradually restored in the modern era. 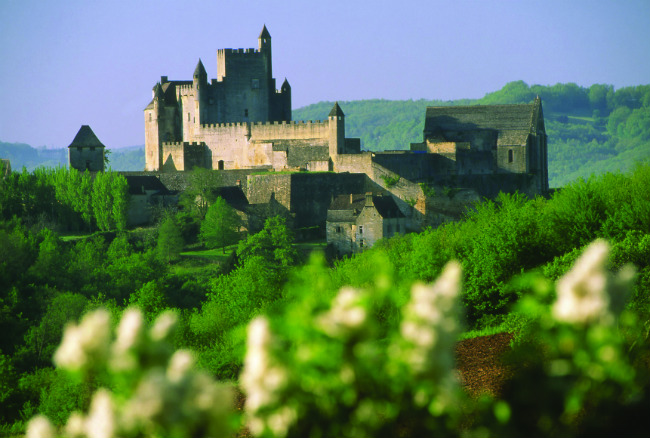 Leaving the heights of Beynac we head for Sarlat, passing through quaint villages with wild red poppies lining the grassy verges and roses adorning the characteristic golden stone walls and gardens. Sarlat is the jewel of the Périgord Noir and we arrive to find it in full swing, celebrating the férié – there’s a huge agricultural foire taking place and the medieval streets are lined with local produce vendors with walnuts, honey, foie gras, and strawberries in abundance. There are even stalls with cows, horses, pigs and, this being the Dordogne, plenty of ducks and geese. There’s a real buzz about the place and the warm weather has brought out the crowds. Luckily our table at the Jardins d’Harmonie restaurant was pre-booked because there’s not a table or bed to be had in town.

As we meander round the charming old streets I’m thinking two things: firstly, I wished I’d booked the dinner a bit earlier because we seemed somehow to have missed lunch during our busy daily itinerary. And secondly, how are we going to get the Morgan into the vieille ville for some photos with this enormous country fair going on? 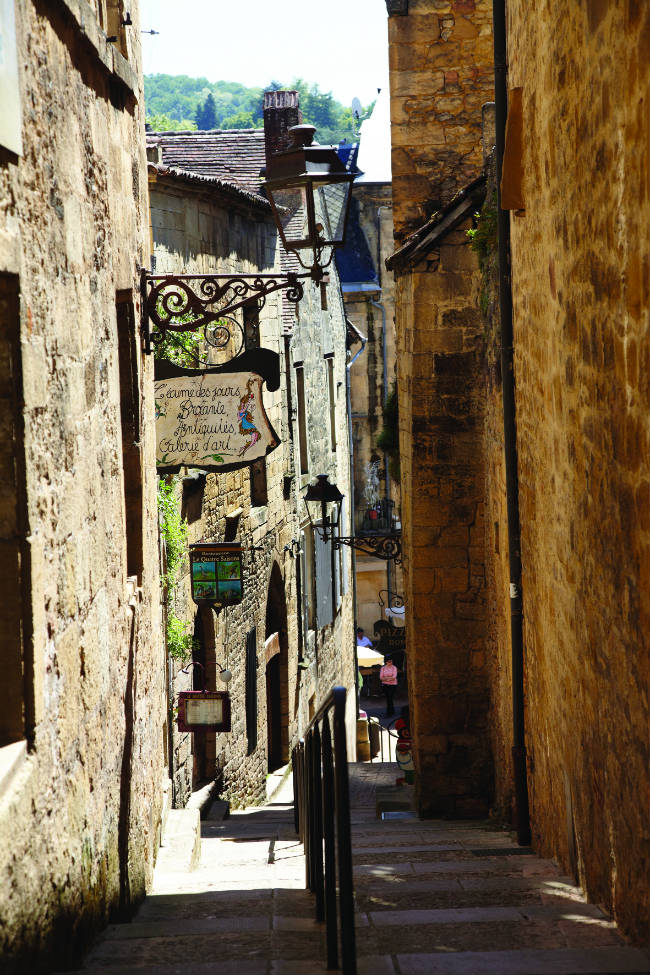 Luckily, on the first count, a late dinner was absolutely worth the wait, and on the second, Katia, my friendly contact at the Sarlat tourism office, waved her magic wand early the next morning. Shortly after 9:00am we gingerly revved up the red machine and nosed our way down pedestrian streets as the traffic police smiled and waved us through like VIPs. Obligingly the morning sun peeked out and I took some shots before another crowd of friendly onlookers appeared and started taking their own photo souvenirs.

I parked the Morgan next to a quaint shop in the old part of town and as I looked up I noticed the sign hanging above the door read ‘Le Petit Cadeau’ – The Little Gift. It seemed an appropriate sign to be hanging over this shiny red toy of a car, a grown-up toy, bien sûr, but still the sort of cadeau that puts an eternal smile on your face and brings back a sense of lost joy to the motoring experience. 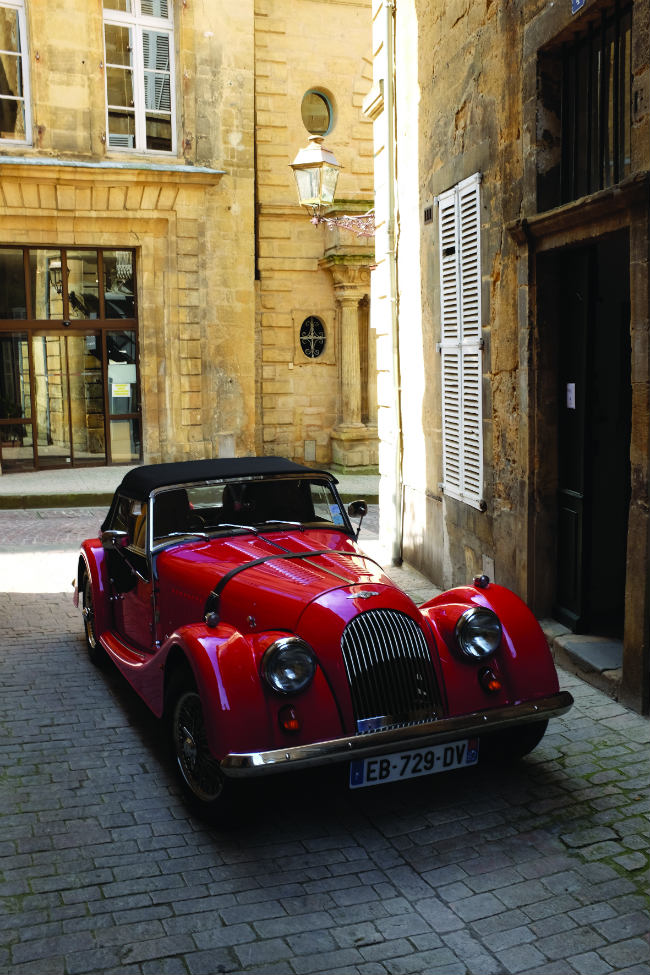 Previous Article What’s on in Paris: 3 Contemporary Art Exhibitions this Autumn
Next Article How Would You Spend €1,000 in Nice?