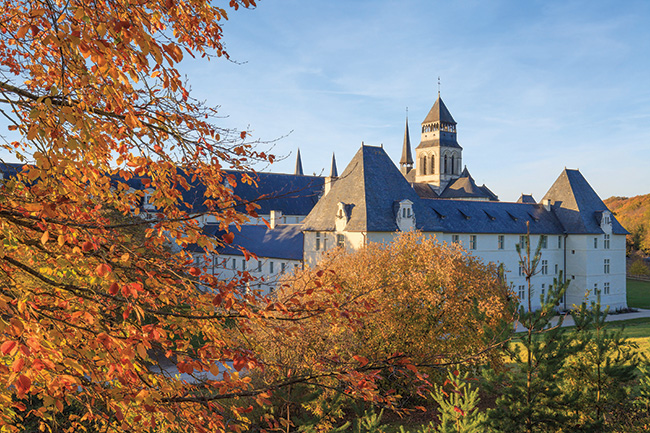 Now on its third lease of life, the Royal Abbey of Fontevraud offers history, art and culture, not to mention some seriously good food. Gillian Thornton walks amongst royalty.

It’s late evening in the Loire Valley and before I retire to bed, I’m taking a short walk through the twilight to spend a few quiet minutes with one of the greatest women of the Middle Ages, and arguably of any age.

The only woman to be crowned queen of both England and France, Aliénor d’Aquitaine spent her last years here at the Royal Abbey of Fontevraud in the Plantagenet heartland of Anjou. Married first to Louis VII of France and then Henry II of England, Aliénor – Eleanor to the English – died here in 1204 at the remarkable age of 82. More than 800 years later, her painted stone effigy rests in the cavernous nave of the abbey church, exactly as she wanted. Situated between Saumur and Chinon in the Loire Valley, the Royal Abbey of Fontevraud was founded in 1011 by itinerant preacher Robert d’Arbrissel, from Brittany,
who soon attracted a large band of followers.

Looking across the gardens from the Grand-Moutier cloister © Gillian Thornton

Impressed by Robert’s charisma and eloquence, Pope Urban II tasked him with spreading the Gospel, but Robert raised eyebrows with his nomadic band of men and women and their strict way of life. With support from the Bishop of Poitiers and local noblemen, Robert set up a monastic community of
four convents in quiet woodland at Fontevraud – the ‘fountain of Evraud’, a local bandit ‘converted’, so the legend goes, by Robert. For women, the Grand-
Moutier housed virgins whose irreproachable life had earned them the privilege of contemplative confinement; repented girls and married women could seek a life of withdrawal in the Madeleine convent; and the sick were nursed by nuns at Saint-Lazare. The smaller group of monks lived outside the perimeter walls in Saint-Jean-de-l’Habit priory.

The Fontevrist community led a life of poverty, penitence and work in line with the Benedictine doctrine, but controversy was never far away, especially after Robert appointed a woman, Pétronille de Chemillé, to lead the holy brothers and sisters. A further 35 abbesses were to follow her before the monastery was disbanded in 1792 after the Revolution. That could have been the end for the sober buildings of white tuffeau stone but Fontevraud was given a second lease of life by Napoleon, and also, more recently, a third. Today, this historical site is a major cultural centre that perfectly combines its rich history with a diverse programme of exhibitions, concerts and private events.

Robert d’Arbrissel spent most of his remaining years on the road, continuing to spread the Gospel and visiting other Fontevrist priories that had sprung up from England to Spain. Meanwhile back in Anjou, the abbey attracted royal patronage and in 1200, the widowed Eleanor retired there at the age of 78. In her final years, this educated and feisty lady commissioned her own stone effigy, painted in the bright colours of her royal robes, as well as effigies of her estranged husband Henry and her favourite son, Richard the Lionheart, both of whom had pre-deceased her.

A learned woman who spoke four languages, Eleanor decreed not only that she should be portrayed with an open book, but also that her recumbent likeness be higher than that of her late husband. Henry had imprisoned Eleanor when she took their sons’ side against him, but Eleanor knew how to make a statement, particularly fitting at Fontevraud where women were held in high esteem.

Today this high-profile king and queen are reunited in death, lying side by side beneath the lofty roof timbers of the abbey church; although their bones are missing, scattered when the Plantagenet tombs were desecrated during the Revolution. At their feet lie Richard Coeur de Lion and beside him, Isabelle of Angoulême, wife of Eleanor’s youngest son John, herself Queen of England until John’s death in 1216. Mother of Henry III, Isabelle died at Fontevraud in 1246. But the Plantagenet dynasty wasn’t the only royal line associated with Fontevraud. Abbesses initially came from Angevin aristocracy, then from the Bourbon Royal family in the 17th century, with the abbey becoming increasingly renowned as a spiritual and intellectual centre. Many royal children were educated by the nuns, including the four small daughters of Louis XV.

The building as a prison in 1950 © Abbaye Fontevraud – J. Richard

In 1792, centuries of monastic life and royal patronage came crashing down in the aftermath of the French Revolution. The last nuns left, the assets were seized by the state, and the Plantagenet graves were lost without trace.

But in 1804 Napoleon saw potential in the wealth of buildings and secluded location, ordering their conversion into a high-security prison which at first housed men, women and children.

Wander round the tranquil abbey complex today and it’s hard to imagine the extra floors that were added inside every building to accommodate prisoners, from the abbey church to the octagonal Romanesque kitchen. The new wave of residents enjoyed a very different kind of contemplation from their predecessors as they exercised inside the Grand-Moutier cloister, watched by guards from the newly built upper storey.

By the 20th century, Fontevraud was known as one of the hardest penitentiaries in France. Residents made buttons, gloves and material goods for the army, and whilst the prison officially closed in 1962, the last prisoners didn’t leave until 1985. But brighter days lay ahead for this unique collection of buildings.

Championed by Olivier Guichard, President of the Pays de la Loire region, Fontevraud was repurposed yet again. This time, the aim was to
breathe new life into the Royal Abbey through a full programme of events and exhibitions whilst respecting its rich and colourful past. The abbey precincts became a giant building site as prison paraphernalia was removed, masonry restored, and the once-ecclesiastical buildings returned to their former splendour as places of contemplation and heritage. At the same time, modern meeting rooms and exhibition areas were created for corporate and private functions in the spaces once walked by Plantagenets and prisoners alike.

Fontevraud from the air © David Darrault

In 1975, the Royal Abbey of Fontevraud reopened as the Centre Cultural de l’Ouest and in 2000, the 14-hectare site was included as part of UNESCO’s World Heritage status award to the Loire Valley. One of the most visited sites in the Pays de la Loire region, it now attracts some 200,000 visitors and conference delegates every year.

Visitors can enjoy changing exhibits along the outdoor Art Trail, buy tickets for concerts and lectures, and see the buildings illuminated on summer evenings. The latest addition to the cultural mix is the Museum of Modern Art which opened in September 2021 in an 18th-century building originally designed to house the carriage of the abbess. Now it is home to the eclectic art collection donated by Martine and Léon Cligman, as well as series of impressive and high-profile temporary exhibitions.

The salon des hôtes, stylishly modernised to offer © David Darrault both comfort and a flavour of its monastic past

There’s plenty to enjoy at Fontevraud whatever your interest, but stay at Fontevraud L’Hôtel and this whole magical experience steps up a gear. Opened in 2014, this unique 54-bedroom hotel occupies the former Priory of Saint-Lazare, once the Abbey infirmary where pious sisters cared for the sick and leprous.

The transformation took two years and the result is spectacular in its simplicity. The white stone building exudes quiet elegance as you walk down the path to the main entrance, and the atmosphere continues inside. Guests are given a rolled ‘handwritten’ scroll at check-in which details everything from room service and bike hire to local markets and the story of Robert d’Abrissel. Sustainability is a priority, so still and sparkling water are on tap in Reception.

Bedrooms are decorated in muted natural colours with minimalist furniture designed to mirror the monastic life, and whilst a hi-tech television and Wi-Fi are welcome concessions to modern life, you can lose the TV in seconds behind a sliding white screen for a more complete digital detox. Outside my window, the abbey gardens give way to perimeter walls and the village rooftops beyond.

An evening apéro in the former chapel-turned-I-Bar is a must before dinner in Saint-Lazare’s bijou cloister and chapter house. Reservations to dine are essential, even for hotel guests. Chef Thibaut Ruggeri has earned a Michelin star and three chef’s hats from Gault et Millau for his sustainable gastronomy that changes with the phases of the moon. My 31st Moon menu starts with soup and dry bread, but definitely not in the way the religious brethren knew it, and ends with an exquisite strawberry and elderberry tart that would tempt the most pious of Sisters.

The meal is sublime, the promise of that bespoke Fontevraud mattress a pleasure to look forward to, but first, my post-prandial stroll. The buildings at Fontevraud remain accessible around the clock to hotel guests and the moon is rising over the white tuffeau walls as I walk through the Grand-Moutier cloister and down the steps into the cavernous abbey church. It’s a spine-tingling moment to stand alone in this extraordinary building and contemplate the painted faces of our most famous Plantagenet monarchs, a shared piece of French and English history. Whatever draws you here, more than 900 years on, Fontevraud still exerts a very special magic.

The Royal Abbey of Fontevraud is open every day apart from December 25 and 26. www.fontevraud.fr

The artworks on display at Fontevraud Museum of Modern Art are amongst more than 900 pieces donated from the private collection of the late Léon Cligman and his wife Martine, who bought paintings, drawings and sculptures by 19th and 20th century artists, as well as antiques from Asia, Africa and the Americas.

A celebrated painter and sculptor in her own right, Martine – professional name Martine Martine – is the daughter of Pierre and Denise Lévy whose donation forms the collection of the Modern Art Museum in Troyes. Her husband, who died in May this year, was a textile industrialist at the head of companies such as Christian Lacroix and Lacoste whose production facilities encircle Fontevraud.

Each themed display in the museum puts artefacts together from different places and eras to provide a visitor experience that goes beyond the constraints of space and time. So a painting by Toulouse-Lautrec could sit beside glassware by Maurice Marinot and antiques from Egypt or Mesopotamia. I was lucky enough to catch a temporary summer exhibition examining how Claude Monet captured the ephemera of light and atmosphere. Check the website for future shows.

Lead photo credit : Fontevraud Royal Abbey is steeped in history, from its inception as a place of worship, through its years as one of France’s harshest prisons to its present incarnation as a centre for arts and culture © Shutterstcok