Journey into otherwordly Papua New Guinea without ever leaving Paris 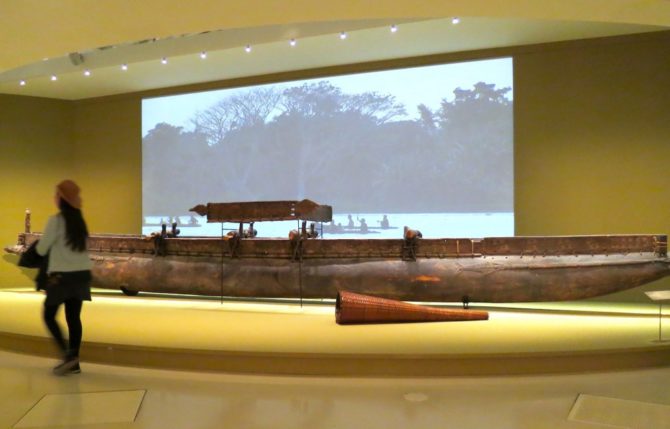 The Quai Branly museum is always a portal of discovery into the mysteries of faraway cultures. It is one of the world’s preeminent institutions for indigenous art and culture of Africa, Asia, Oceania and the Americas.

Every time I visit is a reminder of how little ‘airtime’ these enriching other worlds get in our busy lives, and the latest exhibition is no exception. SEPIK presents a collection of 230 sculptures linked to the Sepik Valley, a large swampland in the north of Papua New Guinea. Since the first millennium B.C. this area has sheltered communities who lived on the banks of or in areas close to the Sepik River and its tributaries.

The first steps introduce the brusque separation of male and female roles in Sepik society, even to this day. Deeper into the exhibit the concept of the ancestor starts to take on a very real, tangible shape. In some cases, even their human remains (or those of the tribal enemies) are used as the material in the eerie artform of skullsculpting. Ancestors are displayed as a sign of respect, and enemies as a reminder so that in future neighbours should think twice about crossing paths with the fearsome warriors.

The exhibition gradually unveils a major figure common to all cultures of the ‘lower’ and ‘middle’ Sepik: the founding ancestor. In Sepik societies, there is no clear-cut boundary between the religious and the secular. When donning a mask representing an ancestor, for example, the descendant ‘becomes’ the ancestor and even speaks in the first person as if channeling the spirit directly. There is an immediate, real-time connection between the past and present.

Layer by layer, the relationship of the Sepik cultures between what is in this world and what lies beyond gradually reveals itself in all its complexity. The exhibition illustrates the multiple forms and variations in which these ancestral figures appear, from their public forms to their mystical manifestations.

Previous Article Behind the Scenes of the Lido de Paris
Next Article Les Antiquaires: Finding a Good Paris Bistrot