Behind the Scenes of the Lido de Paris 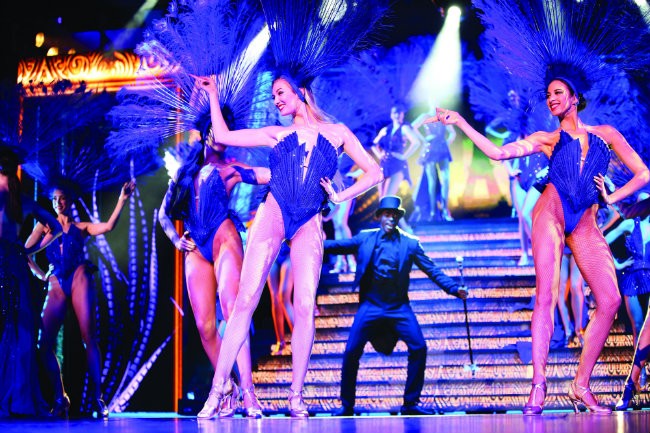 An icon of Parisian glamour, ‘Le Lido’ has been entertaining wide-eyed audiences with its cabaret spectaculars for nearly three quarters of a century. The Lido, which was founded in 1946, shut its doors for a multi-million Euro makeover at the end of last year, and reopened with a brand new revue, Paris Merveilles, this April. Recently, I was fortunate to be invited to take an in-depth look at this revitalised bastion of Parisian nightlife.

The curtain’s up, the champagne is flowing, the chandeliers are sparkling and I’m ensconced in one of the best seats in the house. All the elements for a captivating evening of world-class cabaret are present – from a huskily-voiced, charismatic chanteuse and the vaudeville genius of a host of mime artists, ice skaters, jugglers and acrobats, to the glitzy costumes and, of course, the glamorous girls. Yet there’s a difference – has the Lido’s famous razzle-dazzle factor been turned down a notch? Paris Merveilles, its 27th revue, is a grand – some might say risky – departure from the previous show, Bonheur, which enjoyed a marathon, decade-long run.

I button-hole my fellow audience members after the show, to find out whether the revitalised Lido and Paris Merveilles had the ‘wow factor’. “It’s my first time at the Lido,” says Eugenia Marques, an Anglo-Portuguese visitor from London. “I’ve always wanted to come. I was told it was fantastic and I wasn’t disappointed. It was brilliant, a real classic.”

The new spectacle, from powerhouse Italian-Belgian artistic director Franco Dragone, whose work includes Celine Dion’s Las Vegas shows and several Cirque du Soleil productions, is an ode to the City of Light. No less than 23 sumptuous tableaux take audiences on a tour of some of the French capital’s most emblematic settings – from the gardens of Versailles and the glimmering Eiffel Tower, to a ‘bal populaire’ in a typical Parisian quartier. Indeed, the romance of Paris served as Dragone’s muse. “We wanted to create a show that would make a mark in the Lido’s history,” he says. “It’s an homage to the cabaret genre but it will also – creatively speaking – give it a new lease of life.”

Thierry Toniutti, the CEO and President of the tour company JustRing.com, has been facilitating visits to Parisian cabaret evenings for 30 years. He welcomes the arrival of Paris Merveilles.

“The Lido was perhaps not where it should have been,” Toniutti opines. “It was a bit late when it came to renewing and refreshing its show.” Nevertheless, he says, the Lido remains hugely popular.

“The place has so much history and it has a fantastic location on the Champs-Élysées,” says Toniutti. “Visitors say ‘show me Paris, entertain me.’ And most people get that at the Lido.”

Opened in 1946 by Joseph and Louis Clérico, the Lido quickly became one of the top venues for fine evening entertainment in newly-liberated, post-war Paris.

Over the decades, the Lido has paid host to and presented numerous legendary talents – from Edith Piaf and Eartha Kitt, to Marlene Dietrich and Josephine Baker. The Lido brand even reached as far as Las Vegas– in 1958, it started to mount productions at the then newly-opened Stardust Resort and Casino.

The key to this cabaret’s historic success was its troupe of stunning, statuesque dancers, who were known as the Bluebell Girls. Founded by Irishwoman Margaret Kelly Leibovici (aka Miss Bluebell), the Bluebell Girls enjoyed great commercial success during the 1950s, rapidly becoming one of the globe’s most celebrated dancing troupes. For nearly 40 years, she hand-picked the girls, who were classically trained but too tall for ballet, and from the Lido’s stage they towered over the world of cabaret.

Any danseuse who’s ever donned the Bluebell feathers is a veritable part of showgirl history, says British dancer Meriel Evans, the current Captain of the Bluebell Girls. Evans has been dancing at the Lido for eight years, and leads a troupe of 12 girls through two shows, six nights per week.

“It’s such a huge legacy to be part of, and there’s nothing else out there that can compare – it’s magical,” she says. For Evans, sashaying and high-kicking at the Lido is a lifelong dream come true. While meticulously applying her make-up backstage, she explains, “I always knew that I wanted to be a Bluebell girl. When I was little, there was a TV show on about Miss Bluebell and her life. My grandparents would say to me ‘you should be a Bluebell Girl’ and the idea stuck.”

One by one, other dancers begin to stream in, and ‘put their faces on’ under the bright lights of a long, Hollywood-style mirror. Between checking the roster of dancers who are set to take the stage that evening, and tackling some last-minute costume organisation, Evans recalls hearing the news that the show she’d danced in for several years was on its way out, and that a brand-spanking-new production was around the corner.

“I was very excited when I heard about the change,” she says. “The old show was quite traditional but this show is very modern.” Before heading to her warm-up she adds, “the Lido isn’t just a night out, it’s a whole experience.”

Montpellier-born dancer Mansour Abdessadok, who’s one of 60 artists to appear onstage during Paris Merveilles, agrees: “It really sets itself apart from other cabarets when it comes to the costumes, the dining, the venue – everything!”

With a steady hand, Abdessadok pats some tape down on his face, creating a boxy outline which will eventually be filled in with face paint. After having spent three years criss-crossing the globe with the Cirque du Soleil’s Michael Jackson: The Immortal World Tour, he was looking forward to returning to France: “The Lido is such a prestigious and established cabaret so I accepted straight away.”

Sharing the same dressing room is American dancer-performer LaMichael Leonard Jr, who applies lashings of gold glitter to his eyelids for his role as Cupidon, the show’s “MC through movement”. I follow him through a labyrinth of stairs and corridors to the dancers’ warm-up spot, just behind the stage curtain, where he settles into an hour’s worth of stretching exercises. The space gradually fills up with other artists as he tells me about his dance career in New York, his first impressions of being an expat in Paris and what drew him to the Lido.

“The space is unique,” Leonard says, looking around at the theatre, which is fresh from a €25 million facelift. “The show is a commercial production yet it’s very contemporary – it’s cutting-edge cabaret.”

“I hope audiences say that Paris Merveilles has opened a new chapter for the Lido,” says choreographer Benoît-Swan Pouffer. A Paris native and a former Alvin Ailey American Dance Theater student who had no previous experience choreographing a cabaret prior to joining the Lido, Pouffer believes that his contemporary ballet pedigree – he led the avant-garde New York company Cedar Lake for eight years – landed him the job.

“Franco [Dragone, artistic director] didn’t want the typical ‘step-touch’ that you see in your average revue. Those girls are actually dancing!” he says. “We wanted to honour the tradition of cabaret but at the same time we were told ‘don’t think Lido!’ So we really pushed some boundaries.”

One new addition is a French can-can number, something that another iconic Parisian cabaret is renowned for.

“We didn’t incorporate it to compete with the Moulin Rouge,” Pouffer says. “It’s about touching on something that is very Parisian but with a Lido twist. We’re paying tribute to Paris, its culture and its past – and without the past we can’t move forward.”

The Lido is part of Pouffer’s past – he celebrated his 18th birthday there: “When I was a kid, every New Year’s Eve there was always a TV special showing a Parisian cabaret. It’s such a big part of French culture and I was always fascinated by this world.” Pouffer still has a few souvenirs from his special night out at the Lido with his parents and grandmother. “My mother found some photos only a couple of months ago and showed them to me,” he says. “It was so weird that she kept them and now here I am choreographing the new revue. I’ve been dancing since I was six years old, but I’d never thought I’d be doing this!”

Another member of the creative team who didn’t tread the typical path to the Lido is costume designer Nicolas Vaudelet, who’s worked for such haute couture houses as Dior, Givenchy and Christian Lacroix. Vaudelet’s use of modern techniques and technology, including fibre optics and laser-cut fabric, for Paris Merveilles’s 600 costumes– which still feature some two million crystals and 200kg of feathers – has also brought the Lido bang up to date.

“My goal was to create a very light, super-feminine look,” he says. “Something that the girls can dance in. I wanted them to feel as if the costume has disappeared.”

However, Vaudelet still looked to previous Lido productions for inspiration, as “it was important to pay tribute to all those who came before me. Today, the silhouette is more streamlined, less 1960s cabaret style, but it’s still representative of Parisian elegance, and of the sophistication we associate with this mythical place.”

Benoît-Swan Pouffer considers the Lido to be on a par  with the Eiffel Tower or the Louvre. “It’s a must when you’re in Paris,” he says. “Seeing a show here is just something that you have to tick off your ‘bucket list’.

Previous Article My Life in Provence: A Tour of the Chocolaterie de Puyricard in Aix
Next Article Journey into otherwordly Papua New Guinea without ever leaving Paris