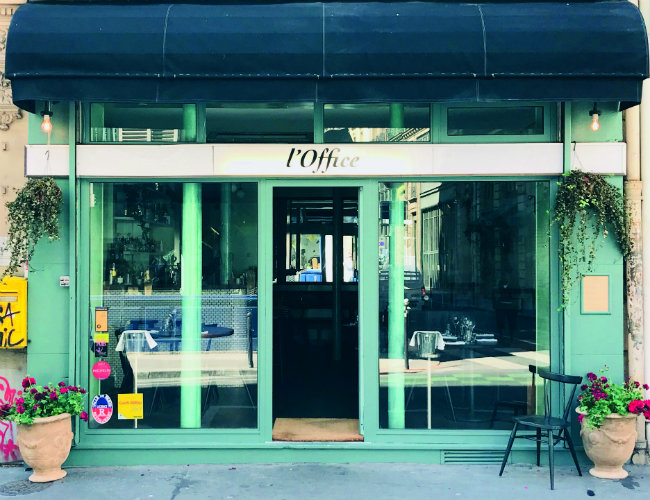 If I liked this small restaurant near the Folies Bergère when it was first opened by restaurateur Charles Compagnon, I like it even better since it’s been taken over and remodelled by Charles Nikitits. Having worked at the Royal Monceau hotel in Paris, and at the Maison de la Truffe in both Paris and Bangkok, Nikitits is a seasoned hospitality professional whose greatest pleasure is sourcing the best seasonal produce possible for his restaurant, including fruit, vegetables and herbs from his family’s farm.

With a white-tiled bar, almond green and toast painted walls, oak plank floors and ’50s retro light fixtures, the restaurant is a perfection reflection of this young, creative neighbourhood in the heart of Paris that shares something with Shoreditch in London and Gowanus or Clinton Hill in Brooklyn, New York. Every detail here has been given attention, including the place settings, since Burgundian ceramicist Judith Lasry spent two months creating a dinner service that would flatter the cooking of young chef Charley Breuvart, who previously worked with Jean-François Rouquette at the Park Hyatt Paris.

Breuvart’s passion is seafood, which came across during an excellent recent lunch here. After shared starters of haddock with potato waffles and horseradish-spiked whipped cream and oeufs en meurette with bacon and pepper gelée, the main courses were suave and stunningly creative. My scallops came on a bed of coriander-seasoned tapioca with garnishes of nashi, fennel and pickled lemon – a magnificent combination of taste and textures that never overwhelmed the gentle, sweet, natural taste of the scallops themselves. Yellow pollack with puréed leeks and potatoes, Brussels sprouts and a shellfish emulsion was subtle and satisfying too. Buckwheat- flour brioche with coffee and whisky flavoured cream and homemade cheesecake with mango and passion fruit coulis finished an excellent meal.