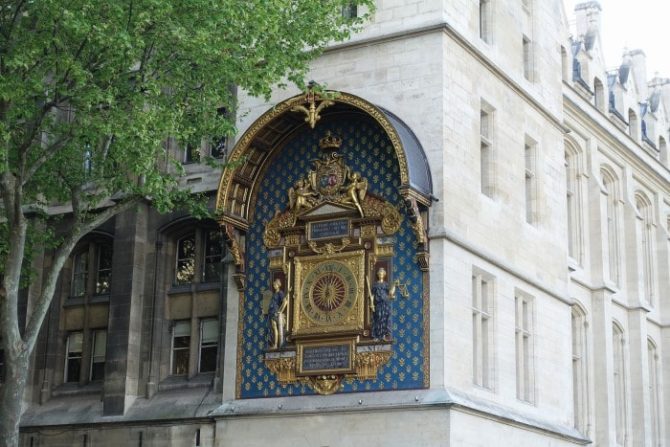 Is this the most punctual street in Paris?

Let us wind the clock back to look at the Quai de l’Horloge, on north-west side of the Île de la Cité, where you’ll find the Palais de Justice courthouse. It owes its name to the famous clock on the courthouse, where the quay meets the Boulevard du Palais. It was the first public clock in France, installed in 1370.

In 1418, the municipal authorities decided it should have an exterior dial “so the inhabitants of the city could regulate their affairs day and night”, or, as the inscription in Latin read on its face, “this machine which makes the twelve hours so fair teaches to protect justice and defend the laws”. The elaborate façade also features two allegorical figures of law and justice.

The street runs from the tip of the island to the corner of the former 14th-century courthouse and prison that housed the Conciergerie, originally part of the former royal palace, which also included the stunning Sainte-Chapelle with its famous stained-glass window.

Many are the turns of fate imprinted on this relatively short street. Perhaps the most notorious of inmates within these walls was Prisoner No. 280 – none other than dethroned queen Marie Antoinette, who was kept in isolation here, summarily tried and sentenced to death.

Read other instalments in our “Read the Signs” series:

Previous Article 8 Best Day Trips from Paris
Next Article My Life in Paris: Hats off to Those Lady Cabbies