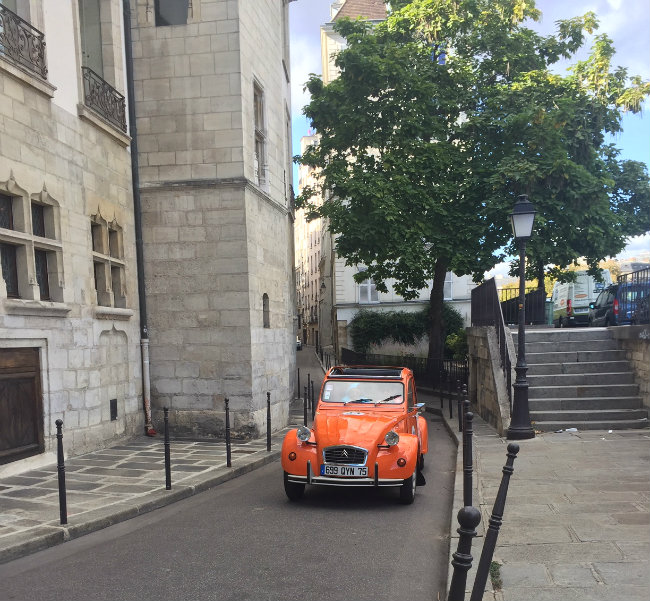 This Ile de la Cité street is Paris old and Paris new, all jammed into a rue 113 meters long and four meters wide. Two blocks away from Notre Dame, Rue des Ursins is one of the oldest streets in the city yet is a popular photo location for current Paris fashion and brides-to-be. It’s alive with the wide diversity of Paris as the Bureau de Naturalization is located at the Prefecture de Police. Look close. Find the back-end location for the repair shop for all the motorcycle cops in Paris or the residence to the only remaining chapel on the island (there were once 23). It’s also de rigueur for French classic 2CV private tourist car tours and groups of students learning the history of Paris. 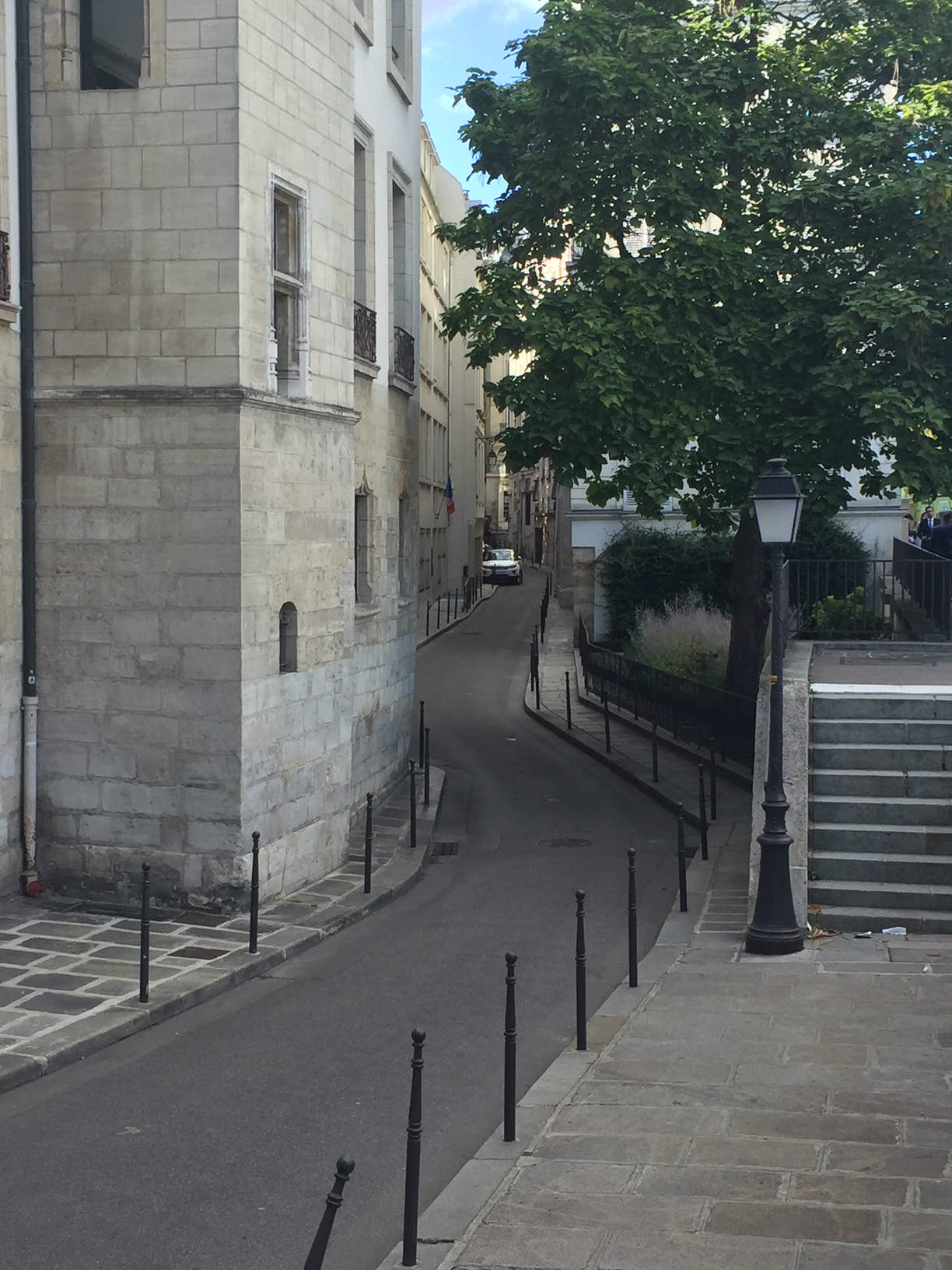 Those Parisian school children holding papers full of data and multiple-choice questions start at the intersection with Rue des Chantres. The view from the top of the stairs on the Quai aux Fleurs looking down Rue des Ursins is the same position as Eugene Atget’s famous photo from 1900. Instead of a couple of hand carts abandoned in a street full of businesses, a pissoir and paper posters cluttering the walls, the buildings are now a reconstructed home with medieval touches, several apartment buildings, a lawyer’s office, a police station and a seminary. The wall decorations are humourous graffiti, and they come and go throughout the year. 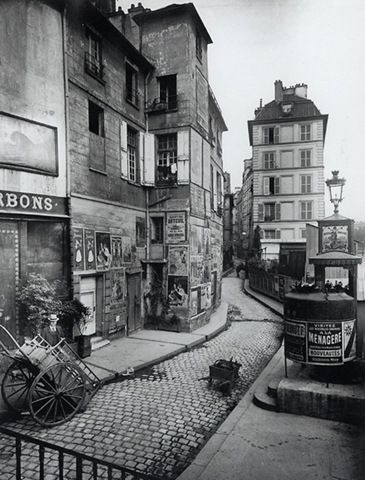 History first. According to the “Dictionnaire Historique Des Rues de Paris” by Jacques Hillairet, this street had several names when it was part of Port Saint-Landry, the first port in Paris that existed until the end of the 12th century. Around 1300, three streets had the name Ursins leading from Port Saint-Landry onto the island. They were named after the hôtel des Ursins once owned by the Ursins family, or Orsini to their Italian relatives. The next owner family was French and became provost, or manager/overseer, of the merchants of Paris under Charles VI (1380 – 1422) through Louis XI (1461 – 1483).

In 1881, the two other streets were changed, leaving only this short street now running between Rue le la Colombe and Rue des Chantres and parallel to the Quai aux Fleurs. 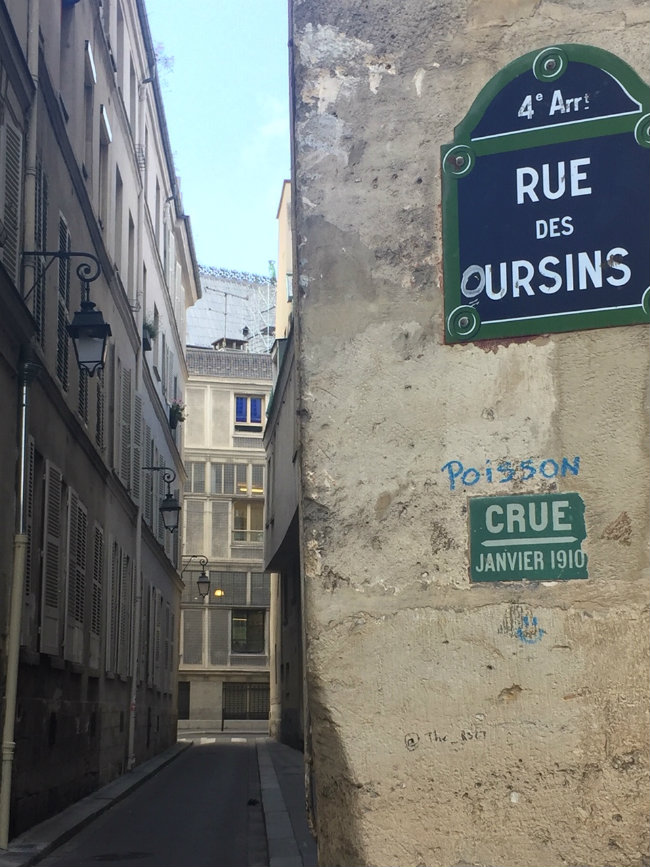 Rue des Ursins was at the old level of the banks of the Seine and the lowest street on the island. It was not touched by Haussmann and maintains its original narrow width with a swerve at one end. The four-meter (12 feet) width makes it a challenge for today’s drivers, especially the 90-degree right turn onto Rue des Chantres, a street so narrow a person can stand in the middle of the street and touch the bordering walls.

At the street corner with Rue des Chantres is a placard that indicates the height of the Seine flood in 1910. The simple green sign says “CRUE Janvier 1910” with a line marking the flood height. Humourous graffiti adds “Poisson” and a happy face, referring to the fish that were swimming in the flood too. Plus, the street sign for years has had an “O” in front of “Ursins”, making it read Rue des Oursins. Although technically it translates to “street of sea urchins,” there are pictures of happy, cartoon bears by the name plates, making it “street of bears.” Graffiti has loose translations. 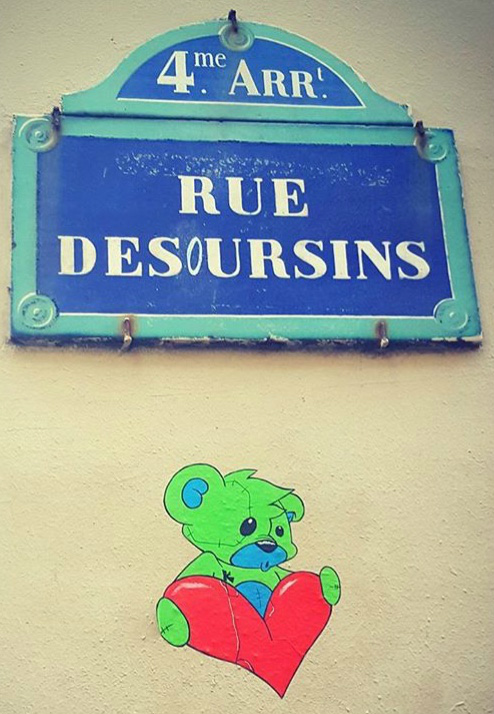 Because the street is so low and right next to the Seine, flooding still happens. In 2016 and 2018, the river reached high levels and several underground caves and storage areas were flooded, even though the streets were not. For two years, Google maps showed wet, ruined articles from an apartment cave that had been put on the street ready for pickup after the 2016 flood. The Google mapping car had travelled along the street the evening before the city pickup making history of the leftovers from the flood. Timing is everything.

The medieval-style building on the corner by the stairs looks like a well-preserved ancient hôtel particulier but it was built in 1958 by architect Fernand Pouillon. A stair leads to a wood, gothic-arched door. The windows above are stained glass. On the other side, the garage door looks like an ancient wood entrance to a fort but holds two cars and is an underground entrance to the hôtel. The site has also been a movie location providing instant charm. 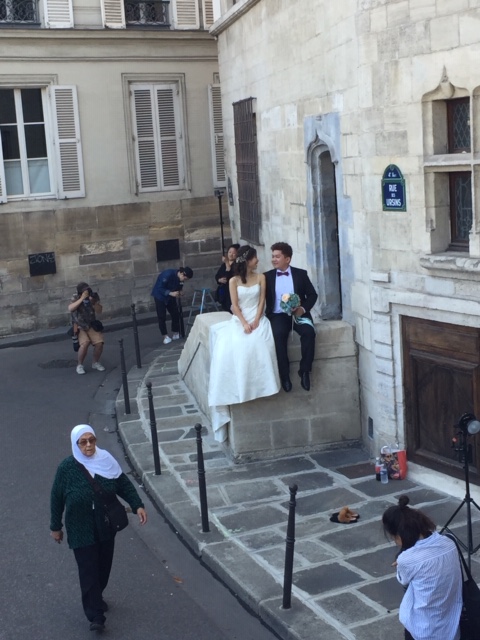 That charm continues as the stairs, door and the street are often photo shoot locations for brides-to-be. Sunny or dreary, there is an almost daily parade of photographers taking pictures of happy couples in lace dresses and tuxedos. Sometimes kissing, sometimes looking very dignified, they depend on the background charm of ancient Paris to provide a memorable impression caught in digital style.

It is also a popular location for fashion photography. Throughout the year, especially at night, photographers catch current fashion with models against striking backgrounds of old textured walls and a vision of a narrow ancient rue glowing in yellow street light. Atget was one of the first photographers of this street, but he started a trend. 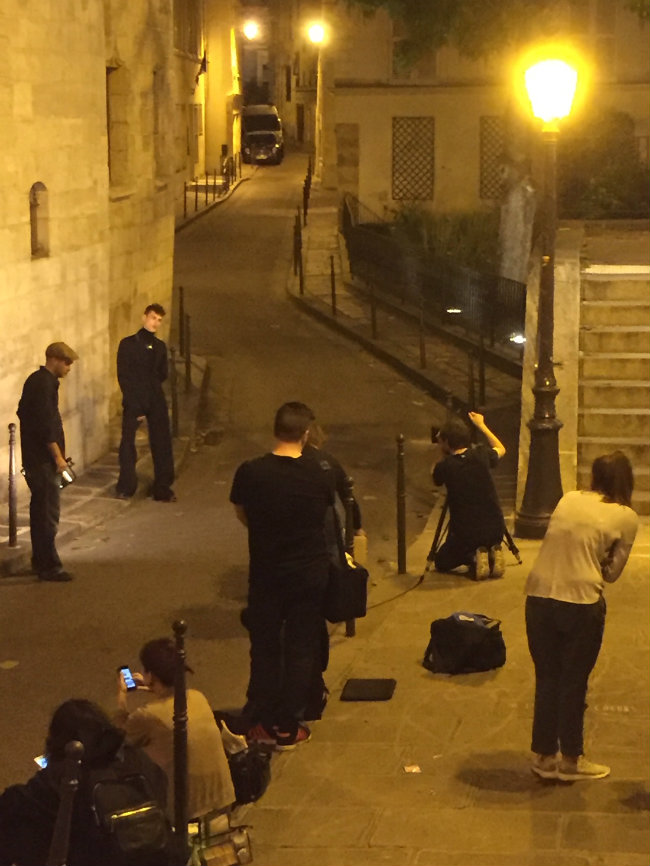 Just past the medieval house is a jardinette, a small triangular garden. It is the smallest garden on the island and one of the smallest in Paris. It features two tiger head fountains, a tree and flowers that change depending on the season.

On Mondays and Fridays, the street hosts a défilé (parade) of people from around the world as the Préfecture de Police houses the Bureau de Naturalisations. Sprinkled among the usual suits, dresses, jeans and jackets are women in colourful African scarves, kangas or dashikis, along with men in long kaftans. Indian women model saris, and some men wear turbans. Muslim women’s hijab headscarves are often patterned with lace, flowers, graphic designs or bright colours. 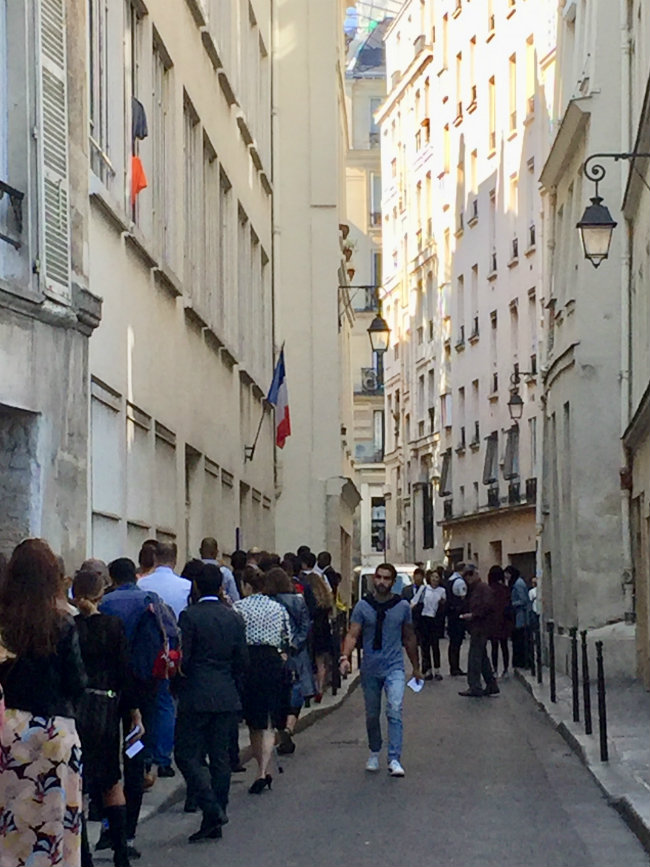 A défilé of people from around the world at the Préfecture de Police. Photo: Martha Sessums

Next to the Préfecture de Police is the repair shop for the Compagnies Motocyclistes, the motorcycle cops in Paris. On warm days when the windows are open, the buzz of electric screwdrivers, sanders and other equipment fills the air, enticing a peak into the guts of the fix-it shop. Experts are changing tires, straightening metal and tuning engines to make the bikes safe rides for Paris’s cops.

Past another apartment building is Number 19, the Catholic Seminary and Administration Offices that also house the remains of Chapelle Saint-Aignan which paid homage to Aignan d’Orléans. At one time the island was loaded with chapels – 23 in fact. But revolutions and changing times have left only Notre Dame, Sainte Chapelle and this chapel. 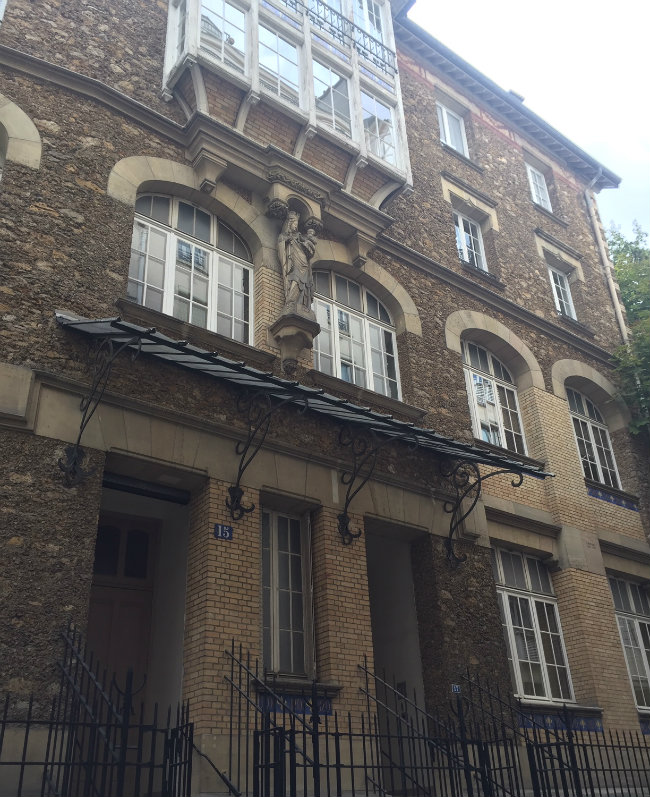 Saint-Aignan chapel, according to Hillairet’s book, was founded in 1116 and was built in classic Roman architecture style with columns and rounded arches in white stone. The chapel was shut in 1791 and transformed into a barrel store. In the following years, it did not survive well and today only the nave is left. It has been restored and seminarians of the diocese and the vicars general privately use it for worship. A 14th century statue of the Virgin and Baby Jesus was once a feature of the chapel, and it now can be viewed in Notre Dame.

Beyond the seminary are more apartments. The end of the street at Rue de la Colombe is not as low, but it’s still an upward walk to Quai aux Fleurs. Turn around and look back at the low street and imagine its history from early sailing port, to bustling stores supporting commerce into the city. From a medieval place of worship to a mélange of bistros, shops and posters. Today it still reflects the energy of the city. One can’t buy anything or eat on this short street, but it is a great place to see the blending of old and new. Plus, one can now pass the French school history test on Rue des Ursins.

Previous Article Home Free: Voltaire’s Chateau at Ferney has Reopened its Doors
Next Article 3 Adventures to Easter Island… in France