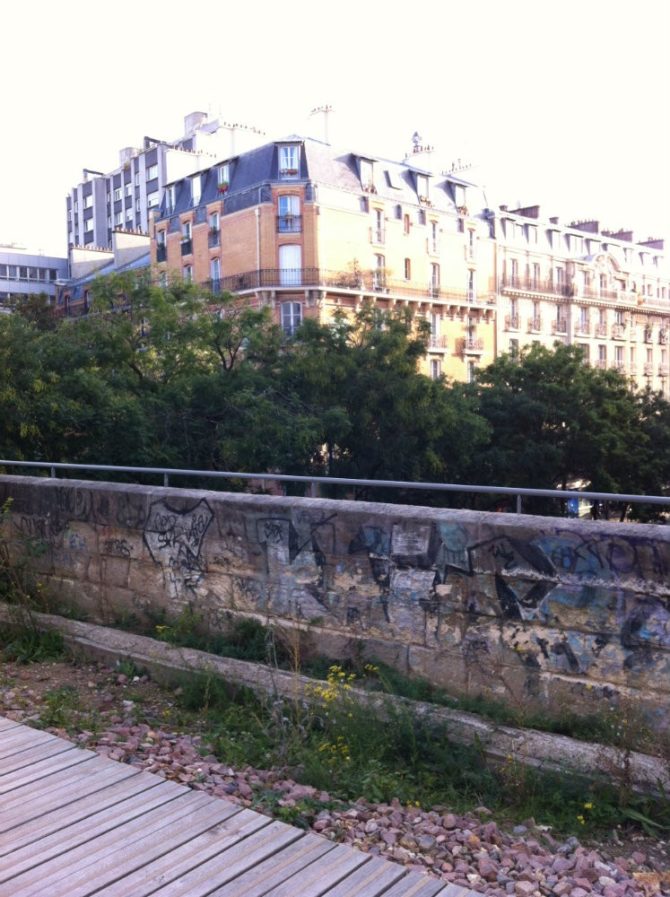 There’s no shortage of lovely walking paths in Paris, but a new trail opens up a stretch of old railway in the 15th arrondissement that affords marvelous vistas from an elevated perch. Much like the Promenade Plantée in the 12th arrondissement, and the High-Line in New York City, this urban project reclaims a part of the cityscape for the enjoyment of both citizens and visitors. Moreover, the new park encourages biodiversity in a natural habitat, with some 220 different species of plants and animals thriving in a “green” environment without pesticide use.

Like a “little belt,” the Petite Ceinture once served as a means of transporting passengers in the 19th century in a circular route around Paris, hitting up the major gares along the way. Later displaced by the metro, the railway was abandoned to nature’s devices: wildflowers sprung up alongside the tracks; hedge hogs and other critters burrowed into rotting logs; street artists scaled the fence to paint colorful designs and murals on walls.

Now a portion of La Petite Ceinture has been opened as a promenade high above the ville. Spanning 1.3 kilometres between Balard and the rue Olivier de Serres (near Parc Georges Brassens), the track overlooks an interesting mélange of architecture that shows the chronology of the quartier— like classic stone facades, brick buildings, newer balconied apartments, a tony tennis club, even the Eiffel Tower in the distance. Access is by squeaky-clean elevators at three different points, or by staircase at five different points. Along the way, you’ll also marvel at the sheer variety of vegetation. Park hours change depending on the season. Now open at 9 a.m. during weekdays, 9:30 on weekends, with a 6:30 p.m. closing time.