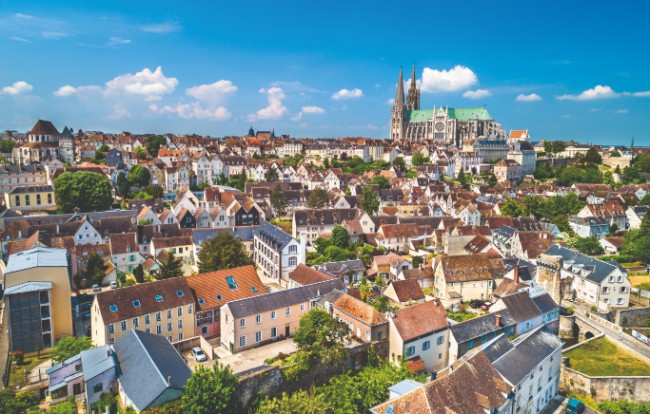 Walk through the Cathédrale Notre-Dame de Chartres on a sunny day and if you’re lucky, you’ll catch rainbow shadows on the flagstones, created by one of the finest collections of medieval stained glass in the world. Henri de Navarre was crowned King Henri IV beneath these soaring roof timbers in 1594 and little has changed in the building’s cavernous space over the centuries.

And yet this famous interior is somehow even more awe-inspiring when you can barely see it. It’s late evening and I’m peering into the darkness ahead by the light of eight gently flickering candles. Led by an expert guide, our little group has walked in the footsteps of pilgrims ancient and modern, entering the crypt by a side door and tracing their traditional route around the lower level. Finally, candles held carefully aloft, we have climbed the worn stone stairs to emerge in the nave where a single small light hangs above the altar. It’s spine-tingling stuff. 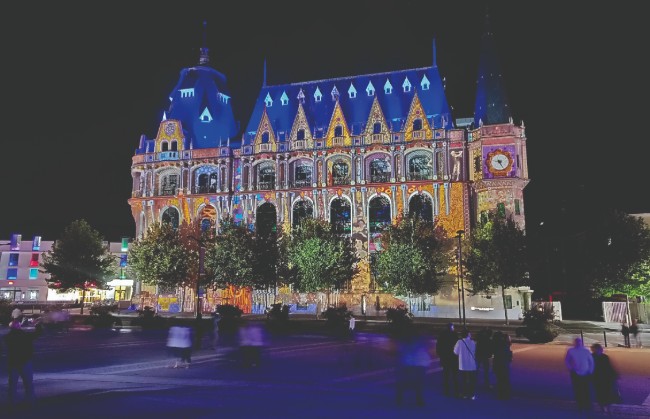 There are many places in France where you can walk pilgrim trails, visit their shrines and step back from the 21st century in the churches they visited along the way. You’re rarely far from somewhere with religious significance and you don’t need any religious beliefs to admire their devotion. But as I stand by candlelight in the darkness of Chartres Cathedral, I’m touched by a deep sense of spirituality that has nothing to do with religion. This is a place where men and women have felt at peace across the centuries and I’m feeling the same sensation right now.

The candlelit tour is just one gloriously atmospheric experience that brings historic Chartres alive for 21st-century visitors. Situated in the north of the Centre region some 90km southwest of Paris, the administrative centre of the Eure-et-Loir département is the perfect city-break weekend, or stopover en route to the châteaux and vineyards of the Loire Valley. 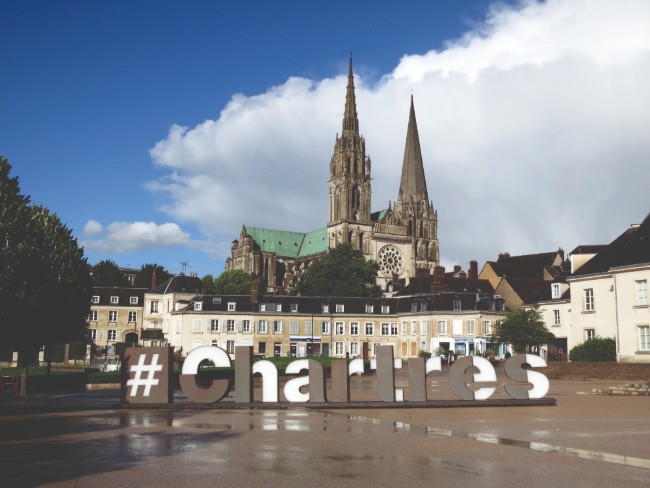 Chartres’s impressive Gothic cathedral is worth a visit by day or night. Photo: V Treney

For visitors, Chartres’s magnificent cathedral is the first stop on their exploration of the Old Town. More than 800 years after they were made by master craftsmen, the multi-coloured windows with their rich reds and deep ‘Chartres blue’ glass still pack a powerful punch. Built between 1134 and 1260, this UNESCO-listed Gothic cathedral is decorated with 172 stained-glass windows, paid for by rich trade guilds and merchants. And each one, high above the nave, is packed with detailed vignettes of biblical events as well as contemporary local life.

The overall effect is breathtaking, but the detail is hard to see from floor level. So don’t miss the Centre International du Vitrail just 50 metres from the cathedral in rue du Cardinal Pie. Located in the half-timbered Loëns tithe barn, this unique museum brings reproductions down to eye-level for close-up study and shows how to interpret the windows. 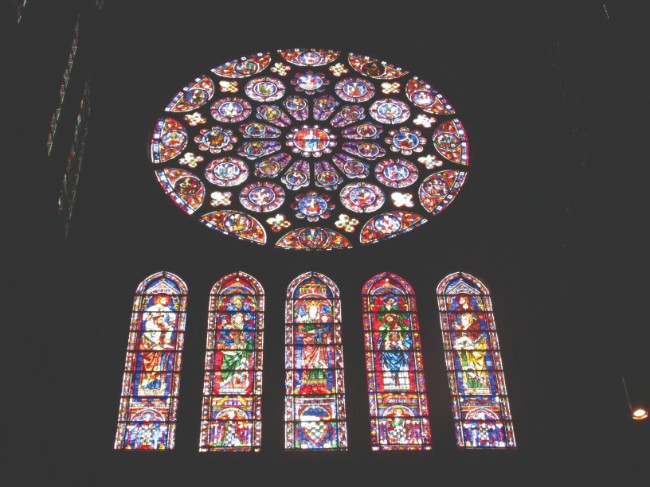 Visit the city between late April and early October each year, and you can enjoy the rainbow colours of Chartres in a very different way. The 1,500 delicately carved statues and sculptures around its nine doorways were painted in bright colours during medieval times.

Today they are the highlight of the annual Chartres en Lumières festival when two dozen sites around the Old Town are lit with animated sound-and-light shows reflecting the history and character of each building. This sensory extravaganza is free to wander at will – just pick up an annotated map from the Tourist Office – or take a tour with commentary on board Le Petit Train or join a specialist tour. 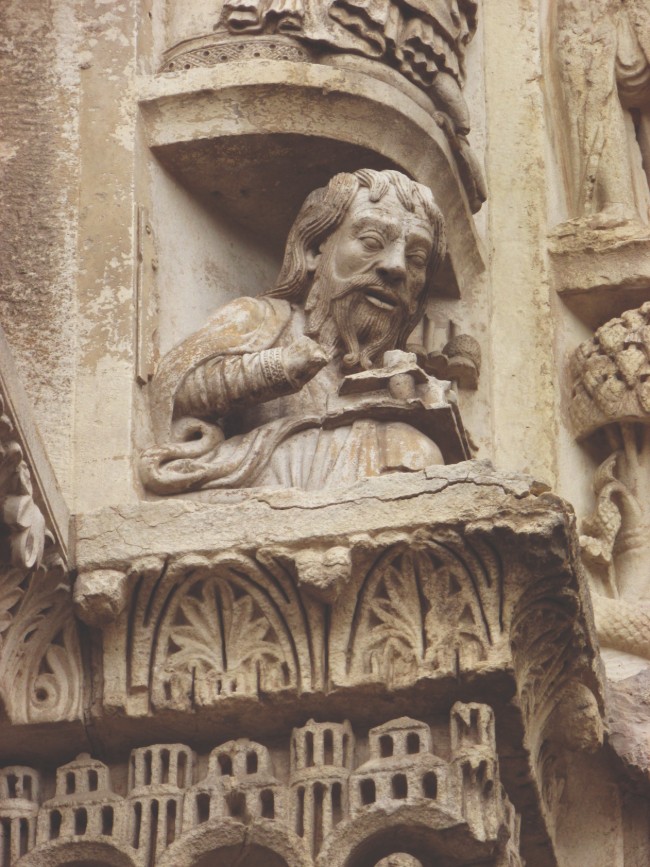 Every year, several buildings are given a fresh show and this year it’s the turn of the cathedral’s Royal Door, though it’s hard to imagine how to improve last year’s display. I watched spellbound as cartoon builders abseiled down bell ropes, magically rebuilding the cathedral after the great fire of 1194, ‘unrolling’ cornicing and placing statues in niches.

I also loved the old stone bridges over the Eure, where illuminated ‘fish’ swam over the stonework, and the Bishop’s Palace behind the cathedral where historical scenes played out across the façade.

This year, the city is also marking a variety of historic milestones with special events and exhibitions. Jean Moulin, Résistance martyr, was the former préfet of Eure-et-Loir, whilst Madame de Maintenon, ‘secret’ second wife of Sun King, Louis XIV, died 300 years ago. Visit her château to the northeast of the city. 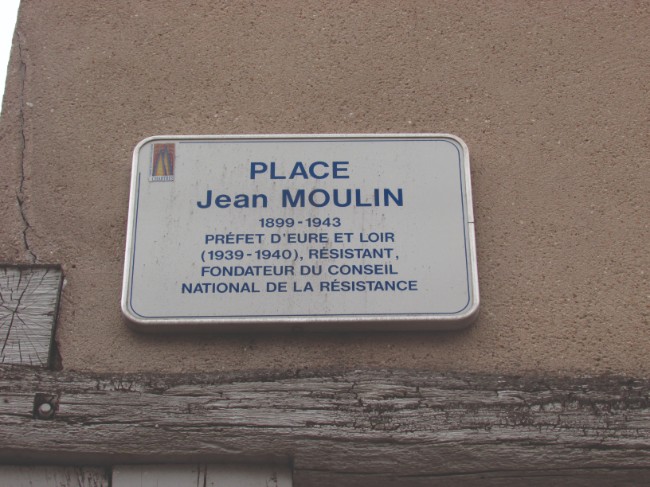 Wind back a couple more centuries, and 500 years of the French Renaissance are being celebrated throughout the Loire Valley – including Chartres. Take a walk on the Old Town trail to spot many examples of Renaissance one-upmanship as wealthy owners of medieval properties gave them a makeover with fashionable new portals, lintels and other architectural features. Rue des Écuyers is home to several restored properties from the 15th and 16th centuries. Don’t miss the half-timbered spiral turret known as Queen Bertha’s staircase. Countess of Chartres through her first marriage and then widowed, she married King Robert II in the 11th century and lived in the castle above this Renaissance property.

A Renaissance pavilion was also built at the foot of the cathedral’s North Tower in 1520 to house the mechanism for the ornate clock with a single hand. Houses were crammed right up against the church walls until the late 19th century, but today, the surrounding close allows room to step back and admire not only the church but also the 13th-century Canon’s House opposite the Royal Door. 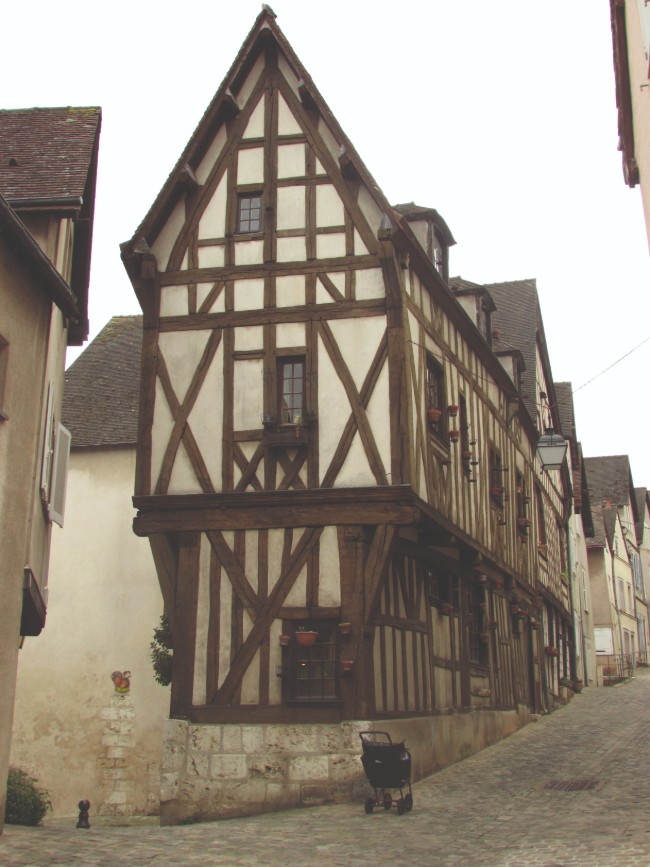 But Chartres isn’t all about the past. The city is home to a number of contemporary stained-glass makers and is also becoming widely known for its street art, especially along Boulevard du Graff, which hosts an annual exhibition in early spring. Look out too for frescoes, such as the ‘Stars of the Silver Screen’ that adorns one wall of Les Enfants du Paradis cinema. Not far from the cathedral, the flamboyant 20th-century Post Office has been given a new lease of life as the Apostrophe media library, its interior transformed by architect Paul Chemetov to offer unique city views in a resolutely modern space.

And in the Bel-Air district, the grey walls of four buildings have been adorned with trompe-l’oeil images depicting half-timbered houses, wheat fields, the Eure valley, and the local perfume industry. Chartres is a major player in ‘Cosmetic Valley’ where top brand names are manufactured, including Dior, Guerlain and Paco Rabanne. 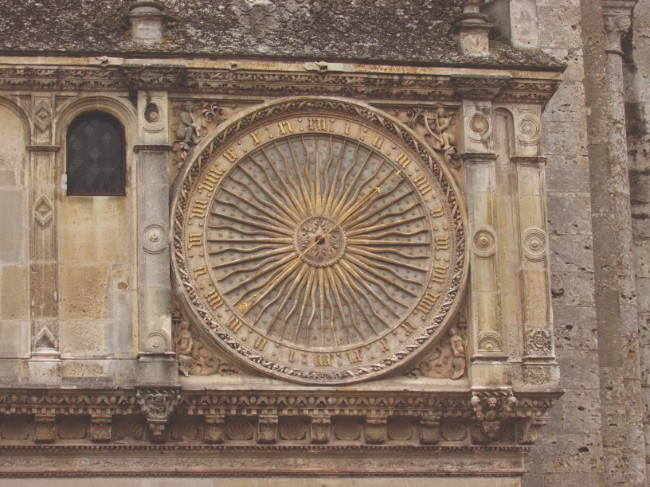 Need to feed the body as well as the soul? If you’re self-catering, browse stalls piled with local produce in the covered market on Place Billard close to the cathedral. Or let someone else do the cooking and munch your way round the city’s many quality restaurants.

Local specialities include traditional Chartres pâté, made from mixed game birds, and Poule au Pot, a chicken casserole championed by Henri IV as the Sunday right of all labourers in his kingdom. For a sweet treat, indulge in a praline and meringue chocolate with a ‘stained glass’ topping in blue and gold, created by local chocolatier David Lambert. A Vitrail de Chartres, of course – what else? 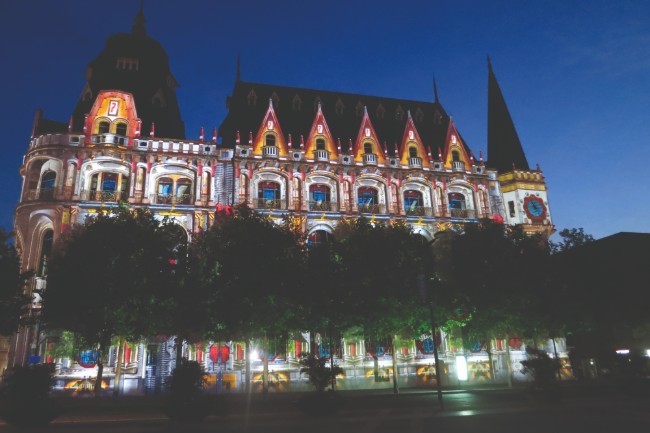 BY CAR: Three hours by car from Caen-Ouistreham and one hour from Paris. www.brittany-ferries.com

BY TRAIN: More than 30 daily links in both directions between Chartres and Paris-Montparnasse. 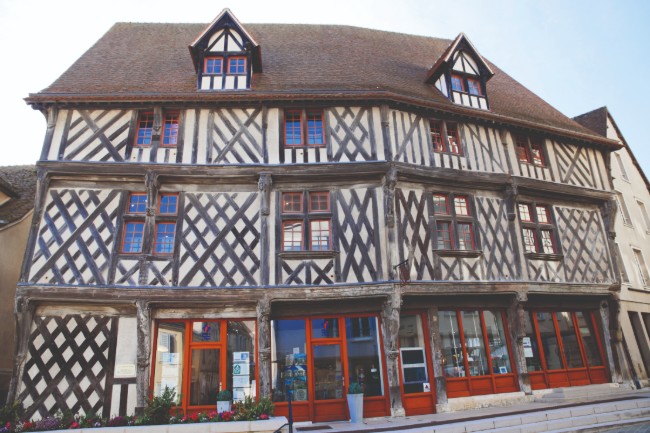 Superlatives abound in this first example of High Gothic architecture, located on the Compostelle route to Tours – 4,000 sculpted statues; 5,000 figures in the medieval stained glass; and the largest crypt in France (third largest in Europe after St Peter’s Basilica and Canterbury Cathedral). On Fridays between Lent and All Saints’ Day, walk the 12th-century circular labyrinth on the floor of the nave.

An annual event since 2003, Chartres en Lumières 2019 ran nightly until October 12, nightfall to 1am. Download the free app or book a specialist tour. ‘Chartres en Lumieres Privilège’ includes a visit to the crypt by candlelight and highlights of the illuminated sites. The ‘Enchanté’ tour starts with dinner in a prestigious restaurant, followed by a stroll round the light installations with music by soprano Veronica Antonelli.

The International Stained-Glass Centre, 5 rue du Cardinal Pie, is housed in a former tithe barn. Open daily, it combines a permanent exhibition upstairs, with temporary exhibitions in one of the most remarkable Gothic cellars in France.

Follow one of the five tertres or ‘mounds’, medieval passages that connect the upper town around the cathedral with the lower town beside the Eure where tanners once plied their trade. Admire the many fine buildings including the 16th-century Maison du Saumon, decorated with wooden sculptures and now home to the Tourist Office.

Thirty minutes’ drive northeast of the city, this 16th-century castle in the centre of town opens from early February to mid-November (afternoons only out of season; always closed on Mondays) and hosts a wide range of special events including a spring tulip festival, historical re-enactments, and a glittering Christmas event.

Previous Article Cruising the Loire from the Coastal Port of Saint-Nazaire
Next Article La Culture: 3 Picks Off the Beaten Track