St. Barth: A Piece of France in the Caribbean 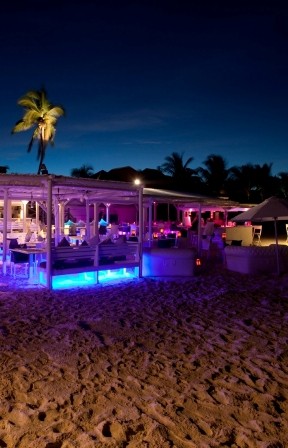 On 22 square kilometres of Caribbean rock, travellers can find a little piece of the French Riviera, as if some modern day Pangaea had launched a fragment of the Côte d’Azur 6,500 kilometres into the French West Indies. That rock is known as St. Barthelemy.

For a small island, St. Barth feels like a much grander place. Above the Caribbean’s turquoise waters, the hills rise asymmetrically and pitch toward one slope, much like an ocean wave. The towering palms, modest Manchineel trees, night-blooming cacti and decorative blooms of wild trumpets and frangipanis, make it hard to imagine that all of St. Barth was once an active volcano.

First time visitors get a complete view of the island when they arrive via airplane. Since only small planes are able to land on St. Barth’s abbreviated runway, passengers experience a combination of beauty, thrill, and skepticism, as the pilot prepares for landing by seemingly aiming for a pair of cliffs. But fear not. Pilots who fly in and out of the island have special training and are famous in cockpits around the world. (When I was in Dubai, for example, I met a First Officer for Emirates Airlines and when I mentioned St. Barth, his eyes doubled in size and he said, “I would love to fly into that airport. I hear it’s amazing.”)

When my pilot cleared the cliffs, he angled the plane toward the runway and brought the aircraft to a stop about fifteen metres from the sea.

The Island and its History

The population of St. Barth is approximately 9,000 people, most of whom are French expatriates or the descendants of the original French settlers. But St. Barth, which was discovered by Columbus in 1493 and named after his brother Bartolomeo, is more than just a French collective.

After the first French colony failed 1648, the next 200 years saw many inhabitants: from the Knights of Malta to the British military to the Swedes, who stayed on the island for nearly a century. Yet in between each of these occupations, the French took back St. Barth and have controlled it continuously since the middle of the 1800s. In 1946, when Parisian stores first began to sell the bikini (which later became the couture of St. Barth), the islanders gained French passports; paid French taxes; and followed legislation drafted in Parliament an ocean away.

France in the Caribbean

Today, visitors to St. Barth come to the island for three reasons: the beauty, the solitude, and the feel of France in the Caribbean.

After arriving, a French expatriate, Aymeric Bourdin, offered to show us the island. Within a minute’s drive, Bourdin stopped his vehicle and waved for a mustachioed pedestrian in dark sunglasses to cross the street. For the next ten seconds, with island-like patience, both driver and pedestrian smiled at one another, insisting that the other go first.

“That is the president of St. Barth,” Bourdin announced, nodding to President Bruno Magras who finally did cross first.

Three minutes later, we pulled into Gustavia, a town named for a previous head of the island, the 18th century Swedish king, Gustav III. It was a slow cruise down the main road. In town, I enjoyed a glass of Bordeaux at the outdoor bar Le Carre, set in the middle of a miniature, less crowded, duty-free version of the Avenue des Champs-Élysées, where French designer outlets like Cartier, Hermès, and Louis Vuitton all stood a few paces from one another.

Besides the modern shops selling French fashion, most of the architecture in Gustavia dates back to when the Swedes arrived in the late 1700s. These buildings had stone foundations that rose up one story and gave way to a second floor that had been constructed out of wood. (For a better sense of the island’s history, visitors can stop off at the Wall House Museum in Gustavia, though the exhibits are mostly in French and Swedish.)

We got back into the car and drove up the hill out of town. There, we were presented with our first view of the coastline from the cliffs.

“It’s so beautiful here,” my wife said, pointing down toward a turquoise bay.

Bourdin laughed. “It’s funny that you should say this. That is actually a factory where they transform sea water into tap water. Everything else around the island is much more beautiful than this.”

Over the next few days, we came to see that Bourdin was right. At the Hotel Carl Gustaf’s restaurant, Victoria’s, I watched as the night settled in upon the storybook vistas of the red-roofed harbour town below. At a peak on the northwest side of the island, the views across the Caribbean to St. Martin and down on St. Barth’s remote Colombier beach, which is only accessible by boat or by foot, were most incredible. From Hotel La Toiny’s restaurant, I enjoyed a phenomenal Sunday brunch, which included a variety of fish tartar, raw shellfish, and French pastries, while also admiring the dining room vistas. Even when I drove past austere cemeteries with above-ground tombstones, and the grimly named beach, Coupe Gorge, (which means “Cut Throat” in French and was named for the early French settlers who had been beheaded by a native tribe), I found the sights of death beautiful, too.

Most days we spent relaxing on the island’s busiest beach, St. Jean. While “busy” can connote hordes of people taking to the Biarritz shoreline, “busy” here meant a few dozen sunbathers, a couple of families, one or two dedicated joggers, a handful of windsurfers, and a 10-person model shoot (which went completely ignored). St. Jean felt most French as the chatter of vacationing Parisian models, French expatriates, and those born on the island filled the lulls between the waves. Even in the surf, which broke on an outside reef beneath the single engine planes that took off sporadically from the airport, I heard more French than I had ever heard in the line-ups at Anglet and Lacanau.

Even though St. Barth is an ocean away from the mother country, the island’s chefs have brought French gastronomy to the Caribbean. When I asked French expatriates what reminded them most of France, they always referenced the idea of their former home’s gastronomic meal–which is on the UNESCO World Heritage list. As locals wanted to retain that connection to home and guests sought out the French experience in the Caribbean, it was only natural that there was such an emphasis on French cuisine.

Aperitifs are followed by multiple courses of French dishes prepared with local Caribbean ingredients, and meals conclude with a typical French dessert like chocolate fondant.

Most nights, my wife and I had our dinners at the Tom Beach Hotel’s beachside restaurant, La Plage, which felt like an exclusive Parisian party for the rich and famous that everyone on the island was invited to. At La Plage, owner Thierry de Badereau offered his Caribbean take on French cuisine and entertainment. The restaurant had four themed dinners each week, the most popular being the “I Love Fridays” party. At this Caribbean Cabaret, stunning models paraded around La Plage in de Badereau’s clothing line; an acrobat pole-danced as if on loan from Cirque de Soleil; a fire spinner launched pyrotechnics; and de Badereau’s daughter worked as resident deejay. La Plage’s French menu blended the essence of the island by combining homemade foie gras with mango chutney, replacing steak tartar with wahoo fish meat, and arranging smoked salmon and papaya in a bowl as if it were a fully bloomed rose. At the end of the meal, waiters moved through the sand with shot glasses and a skull-shaped bottles filled with vanilla rum, serving up a digestive that de Badereau made in his garage.

Having heard that St. Barth was an island mainly for the rich and famous, I always wondered about the pasts of the people whom I had met, curious as to what it took to call this incredible island home. “Where are you from?” I would always ask.

Most named a city in France and instead of following up the question with a similar one, they would ask, “When will you return?” With this question, residents were warning me that this intoxicating island, which had kept them from returning home, would probably affect me too.

Staying on the Island

Unlike many islands in the Caribbean, where the potential for profit is rooted drives construction projects, St. Barth has created a harmony between architecture and nature. Buildings are scarce, and these existing red, green, and white-roofed properties fit seamlessly into the rock and vegetation.

Since there are only about 30 hotels and resorts, the largest having 75 rooms, the number of visitors is kept low.

The island essentially shuts down from the end of August to the end of October when hurricane season is historically worse (though storms can always spring up as early as June and make landfall as late as November). The months outside of hurricane season, however, are perfect for visiting, though it’s important to remember that the island is busiest in December and January. If visiting then, consider booking early. To get to St. Barth, travellers can fly to St. Martin, where one of a half dozen airlines, like Win Air or St. Barth Commuter, charter flights to the island.

Flights also depart from other islands, such as Anguilla and Puerto Rico. If visitors find small planes too frightening, travelling via ferry is a more relaxing alternative.

The island has lots of festivities– starting with Bastille Day and St. Barthelemy Day, which celebrates the adoption of the French Constitution.

Thierry de Badereau of the Tom Beach Hotel created Summer Sessions five years ago. What first began as a few performers at La Plage, now features thirty musicians who play at seventeen venues around the island during the first two weeks of August.

Through de Badereau’s non-profit organisation, St. Barth Rocks, performers from Iceland, Germany, South America, Canada, and the U.S. are brought to the island. This year, California’s Adam Lasher– a singer-songwriter who possesses both the DNA and guitar skills of his uncle Carlos Santana– personified the vibe of the festival. Think talent mixed with improvisational playing and unrehearsed collaboration.

“Here, we can let loose and just play,” he said at brunch, before his set that evening with Icelandic singer Greta Karen at Hotel Le Toiny. My wife hummed a song stuck in her head as she cut into her egg. “We can play that,” Lasher told her and then discussed his plans to transform a series of famous rock songs, like House of the Rising Sun, into a reggae set.

Noah Lederman writes the travel blog Somewhere Or Bust. His writing has appeared in The Boston Globe, The Chicago Sun-Times, Islands Magazine, and the Economist.