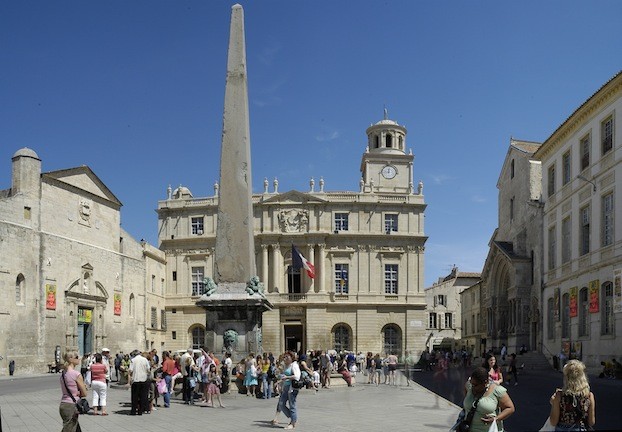 In Arles a few weeks ago, I was sitting on a stone bench in the 2,000-year-old Roman amphitheater, where gladiators once faced lions, caught up in the excitement of the courses Camarguaises: young Arlésiens dressed all in white, trying to snatch a rosette strung between the lyre-shaped horns of black Camargue bulls. It’s not unlike the games depicted on ancient Greek and Roman vases, except that in Arles the opening ceremony and the half-time show are folk dances performed by young women in the traditional shawl-collared costumes and straw sun hats of 19th-century Arlésiennes.

Nowhere else in Provence do the layers of history and myth overlap as vividly as they do in Arles, and nowhere else does daily life in the present seem so directly, and casually, linked to the past. In the city’s main square, the Place de la République, an obelisk from the 2nd-century Roman circus that once stood on the outskirts of town is surrounded by the 12th-century church of Saint Trophime, the 16th-century Tour de l’Horloge, the early 17th-century church of Sainte Anne, the late 17th-century Hôtel de Ville, the 18th-century facade of the Episcopal Palace and a few 21st-century shops. Folklore and festivals are regular fare here, and citizens of all ages seem to own traditional costumes and hop into them with singular aplomb.

By the time the Romans arrived to colonize it, somewhere around 125 BC, the former Greek outpost on the banks of the Rhône called Théliné had reverted to its Celto-Ligurian roots as Arelate, a Celtic word meaning “near dormant water”—not the marshy Camargue we know today, but a vast lake that once covered the northern plain. Arelate’s future as a maritime port and trading center was insured when the consul Marius built a canal linking the Rhône to the sea in 105 BC. Later, Marius gloriously defeated invading Teutons, a victory so memorable that ever afterward boys throughout Provence have been named after him.

Perfectly situated at the crossroads of three main Roman arteries— the Via Aurelia, Via Agrippa and Via Domitia—and settled by veterans of Caesar’s 6th Legion, Arles prospered even as Rome declined. Fourth-century Emperor Constantine made Arles one of his capitals, and so embellished the city that it became known as “the little Rome of the Gauls”. By its 5th-century apogee, noted a contemporary writer, “All that the Orient, all that Araby with its heady perfumes, all that luxuriant Assyria, all that Africa with its rich soil, all that beautiful Spain and fertile Gaul can produce is met in Arles.” The fabled market town also had paved streets with sidewalks, an aqueduct, sewers, fountains, marble-walled public latrines, a forum, a splendid theater, the largest amphitheater in Gaul, a circus for chariot races, and Constantine’s thermal baths.

Today only fragments remain of the aqueduct and the circus, and the baths are in ruins, but what’s left of the theater and the nearly intact amphitheater are still going strong. And the prodigious Saturday morning market fills the entire length of the Boulevard des Lices with fruit, vegetables, fish, fowl, cheese, lavender, honey, olives, live chickens and ducklings, clothes, shoes, pots, pans, furniture, mattresses, millinery, jewelry, fabrics, scented soaps and spicy saucissons d’Arles.

Known as les arènes, the 1st-century AD amphitheater is missing only its third-story atticus. During the Middle Ages, it was transformed into a fortress town-within-a-town, with some 200 houses and two chapels nestled within its walls. Today the stands are packed with cheering fans, not only for the purely Provençal courses Camarguaises but also for traditional Spanish bullfights in which the bull is killed—visitors should beware the difference.

The 1st-century BC theater served as a handy stone quarry for later builders, and the marble stage wall has been reduced to a pair of graceful columns, known as the “two widows”. But the theater, romantically surrounded by broken marble remnants, is still a magic place, and at night it’s often filled with audiences come not to applaud Plautus but for concerts, films and the projection shows of the city’s annual July photo festival, Les Rencontres d’Arles.

Chunks of the theater went into building the church of Saint Trophime, whose splendid facade, cleaned and restored, is a triumph of the Provençal Romanesque style. Inside, several altars are recycled marble sarcophagi from the Roman burial grounds at Les Alyscamps, on the riverside edge of town. Saint Trophime’s cloister is one of the most beautiful in France, with elaborately carved capitals depicting biblical scenes and Provençal legends, including one depicting Saint Marthe taming the tarasque, the legendary monster who lives on the banks of the Rhône: a giant six-legged, spike-backed amphibian with the head of a lion and a serpent’s tail. Partly under scaffolding for renovation until early 2013, the cloister is worth a visit nonetheless.

Trophime, the first bishop of Arles, is said to have consecrated the first Christian burial grounds in the old Roman necropolis at Les Alyscamps, a cemetery so revered that people living miles up the Rhône would float coffins down the river for burial. A stroll through the public garden—painted by Van Gogh—and across the Boulevard des Lices will lead to the small Avenue des Alyscamps, which curves along a shady canal to the Alyscamps entrance. At the end of its tree-lined allée of tombs, the ruins of an 11th-century basilica now stand open to the sky, its nave an accidental garden of wildflowers and trees. Stop for a moment at the small 4th-century sarcophagus of “most sweet and most innocent Chrysogone” who died at the age of three, “rarest of daughters and all her life most cherished”.

Almost all the ornate sarcophagi of Les Alyscamps have been pillaged, but a superb array of those that were saved can be seen in the wonderful Musée Départemental de l’Arles Antique, along with the colossal statue of Augustus rescued from the Roman theater, exquisite marble statues of dancers with swirling gowns, ornate mosaic floors and scores of other vestiges of ancient Arelate. Among the many highlights are beautifully detailed scale models of the city’s circus, amphitheater, water mill and an astonishing boat-bridge that once spanned the Rhône. (An exhibit from the museum’s collection of Roman treasures dredged from the Rhône over the last 25 years is at the Louvre in Paris until June 25, 2012.)

The Place du Forum is slightly north of the actual site of the ancient Roman forum, but, filled with open-air cafés, it’s still the city’s central gathering place. At one end, two marble columns embedded in the facade of the legendary Grand Hôtel Nord-Pinus, are relics of a temple that stood adjacent to the original forum. Just in front of them is a dapper bronze statue of Frédéric Mistral, the 19th-century poet who spent his life reviving the Provençal language and identity. With the prize money from his 1904 Nobel Prize for poetry, Mistral founded the Museon Arlaten, a museum of Provençal folk arts that was an old-fashioned delight, with a staff of smiling Arlésiennes in traditional costume; closed for renovation, it’s scheduled to reopen in 2014.

Like so many other places in Arles, the Place du Forum is a reminder of Vincent Van Gogh, who lived in the city in 1888–1889, when the light and colors of Provence inspired the most prodigious outpouring of his brief career—some 300 paintings and drawings in 15 months, including the famous yellow house, his room with the straw-seated chair, the sunflowers and starry nights, and the courtyard of the hospital where he was taken after he cut off his ear.

The Place du Forum is an ideal, almost inevitable, place to pause for a coffee or a drink, but not just anywhere. The café imitating Van Gogh’s starry-night painting The Café Terrace on the Place du Forum, Arles, at Night is a bright-yellow tourist trap. The best spot is the terrace of the Nord-Pinus, a hotel first made famous by its starry clientele of artists, actors and bullfighters in the 1950s and 1960s.

Another great stop is the tiny Place Nina Berberova and Le Méjan, the bookstore-cinema-café-restaurant complex of Actes Sud, a publishing house founded in 1978 by Belgian writer Hubert Nyssen and now run by his daughter Françoise Nyssen and her husband Jean-Paul Capitani (see Actes Sud, France Today June 2007). The bistrot, L’Entrevue, has an eclectic Provençal-Moroccan-Spanish menu and a delightful terrace facing the stone walkway along the Rhône.

A walk north along the curving river leads to a pair of stone lions on tall pillars facing a matching pair across the water—leftovers from a bridge destroyed in World War II. Looking back from there, the view of the city is almost exactly that of Van Gogh’s Starry Night Over the Rhône.