The Discreet Charm of the 9th 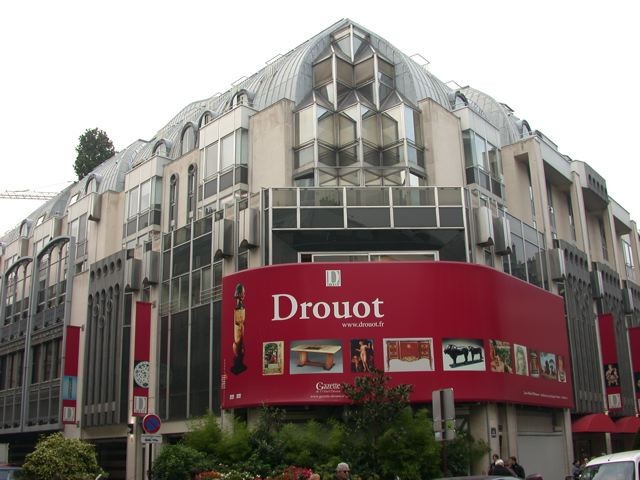 North of the Grands Boulevards and south of Clichy and Montmartre, the 9th arrondissement is shaped like a butterfly perched in the centre of the Right Bank. Well off the regular tourist routes and largely bypassed by developers, the area has preserved almost intact its discreet early 19th-century architecture, charming courtyards and a timeless Parisian air.

In the 19th century, this was the territory of the mythical “Gay Paree”, where every level of society converged—the moneyed, the fashionable and the artistic. The Palais Garnier Opera, the Folies Bergère, the Casino de Paris, the Moulin Rouge (just across the border in the 18th) stand witness to those times. As does the Hôtel Drouot auction house, pointing to the time when the 9th was the thriving hub of France’s art market. The present Drouot building dates from 1980, a rare contemporary construction in this otherwise concrete-free arrondissement. But aside from the modern-drab Drouot, even most of the newcomer ethnic restaurants and food shops have woven themselves seamlessly into the 9th’s perennial Parisian fabric. Its young residents have done the same, bringing in their own generation’s culture, but respectfully. Witness Toulouse-Lautrec’s one-time haunt, le Divan Japonais—redubbed Le Divan du Monde—now one of the city’s liveliest night clubs, right across the Montmartre divide.

A stroll through the 9th arrondissement is a simultaneous journey through 19th-century and contemporary Paris, sprinkled with exquisite secret corners and little-known museums along the way.

Start out at the Passage Jouffroy, at nos. 10-12 blvd Montmartre, one of the glass-covered 19th-century arcades designed to provide shoppers protection from wet weather. It is now home to the Grévin wax museum with its splendid Belle Epoque interior. The old-world flavor remains as you cross the next street into the Passage Verdeau, where boutiques are filled with antique photos, vintage prints and the heady fragrance of dusty used books. (Here you’ll also find the well-known Italian restaurant I Golosi.) On the corner of rues de Provence and du Faubourg Montmartre, A La Mère de Famille is the city’s oldest sweetshop, opened in 1761 and still graced with a spectacular, fairytale 19th-century decor.

Follow rue de Provence to the Hôtel Drouot, at no. 9 rue Drouot, in an enclave of antique, stamp and coin shops where the scent of furniture-restorer’s varnish occasionally wafts through the air. The original Drouot opened in 1860; Napoleon III visited it soon after and purchased two terracotta pieces for 12,600 francs. The famous art galleries followed, opening on rues Laffitte and Le Peletier—Durand-Ruel, Vollard, Bernheim. In 1874 Durand-Ruel caused no small commotion with his exhibition of several Impressionist painters—”Five or six lunatics, one of them a woman,” according to Le Figaro. (The loonies in question were Degas, Monet, Renoir, Pissarro, Sisley and Berthe Morisot).

The Mairie (City Hall) of the 9th arrondissement is housed in an elegant 18th-century mansion at 6 rue Drouot, the one-time home of a Portuguese Jew, Alexandre Aguado, who was the king of Spain’s banker and owner of the Château Margaux vineyards in Bordeaux. A great opera lover, he took Rossini under his patronage.

Retrace your steps and continue diagonally to the right, beyond the Passage Verdeau and into rue Cadet. It is home to a small, good-value-for-money street market, and to the Freemason’s Temple and its interesting museum, the Musée du Grand Orient de France, at no. 16. Then head west along rue de Châteaudun towards the church of Notre Dame de Lorette, after whom the neighborhood’s women of easy virtue—les lorettes—were ironically nicknamed. According to Baudelaire they owed their notoriety to painter and cartoonist Paul Gavarni, who painted and drew them extensively. Gavarni lived nearby on rue Saint-Georges, as did Impressionist painter Auguste Renoir. Built as an urban project in 1824, the district was named after the lovely Place Saint-Georges, further up the street, where Gavarni’s bust honors the central fountain. Romantic painter Eugène Delacroix, who lived just north of Place Saint-Georges at 58 rue Notre Dame de Lorette, left a written testimony of one admirable lorette, “all clad in black satin and velvet, who, when alighting from her cabriolet, with the nonchalance of a goddess, let me see her leg up to her belly.” The Marquise de Païva, who was no ordinary lorette but the Second Empire’s most notorious courtesan, lived at 28 place Saint-Georges while waiting for her plush townhouse to be completed on the Champs-Elysées. The Hôtel Thiers, a private mansion at no. 27, replaced French statesman Adolphe Thiers’s original mansion, which was burned down by the Parisian working classes during the 1871 civil uprising of the Commune; today it houses the Fondation Dosne-Thiers, a museum of Napoleonic memorabilia (by appointment only), and a superb library of 19th-century Parisian history open only to scholars.

A little farther north, the tree-shaded Place Gustave Toudouze offers a foretaste of Montmartre, making it a favorite hangout among the neighborhood’s bobos (bohemian bourgeois). One of the nearby hot spots today is the Rose Bakery, 46 rue des Martyrs, a small bakery and restaurant that’s a “must” among the city’s young and trendy. The Rose looks like an organic grocery shop, fronted by funky chairs and tables on the narrow pavement, and serves excellent fare and delicious pastry.

As you make your way up the steep rue des Martyrs, have a thought for the legendary martyr Saint Denis, the first bishop of Paris who was made to climb this route to Montmartre, where he was beheaded. (Undaunted, so the legend goes, he then carried his severed head several miles north, where he expired on the site where the Basilica of Saint Denis now stands.) Today the street overflows with lush food stalls, among them a fabulous boulangerie, Arnaud Delmontel at no 39. The Hôtel Amour, both a hotel and a popular restaurant-café-bar at 8 rue de Navarin, is another trendy “must” address, spelling out its deliberately risqué romantic intentions. I’ve only been here during the day, but my favorite bit is the exquisite back garden with its leafy little nooks.

Proceed west along rue Victor Massé, once home to Edgar Degas, now taken over by the pop-music business, reprising the days when artists would come to look for models at nearby Place Pigalle and orchestra conductors rounded up musicians. At the junction ahead, behind the wrought-iron gate on your right, lies a gorgeous, leafy alley called Avenue Frochot, one of the city’s hidden gems, lined with a mix of bourgeois houses and artists’ studios. Alexandre Dumas and Toulouse-Lautrec lived here, and later film director Jean Renoir (son of Impressionist Auguste) and gypsy jazz guitarist Django Reinhardt. Unfortunately, the gate is usually locked, but should you have the opportunity to wander in and take in the bucolic peace and birdsong, you will be hard put to believe that the vibrant bustle of Place Pigalle lies just behind.

West of Saint-Georges, la Nouvelle Athènes was the haunt of the Romantics; the name commemorates both ancient Athens and the Greeks’ contemporary (19th-century, that is) struggle against the Turks, as exemplified in Delacroix’s famous 1826 allegorical painting of Greece on the Ruins of Missalonghi. You can catch a glimpse of those artistic times at the Musée de la Vie Romantique, 16 rue Chaptal, an Italianate house that belonged to portrait painter Ary Scheffer. As you enjoy a drink in the flowery garden, imagine the Friday night gatherings with Ingres, Delacroix, Liszt, Chopin, George Sand, Turgenev and their friends. In 1856, Charles Dickens sat here three times a week for his well-known portrait by Scheffer. Today the museum is furnished with George Sand’s memorabilia, bequeathed to the city of Paris by her granddaughter. She and Chopin lived at the Square d’Orléans (at 80 rue Taitbout), respectively at nos. 9 and 5. Designed to look like a London square, its colonnade evokes the Regency style around Regent’s Park.

At no. 14 of the parallel rue de La Rochefoucauld, the home of Symbolist painter Gustave Moreau is now a fascinating museum. Moreau was Henri Matisse’s admired teacher, equally admired later on by the Surrealist André Breton, who in his youth came to visit here from his nearby home on rue Fontaine. Farther along on the left, rue de la Tour des Dames—once the hub of Nouvelle Athènes—still displays some architectural treasures, notably the Palladian building at no. 2. No. 4 was once the site of the windmill of the all-female abbey of Montmartre, for which the street is named. The venerated Comédie Française actor François-Joseph Talma lived at no. 9; a staunch revolutionary, Talma discarded the powdered wig that was standard gear no matter what the play and introduced authentic period costumes. Napoleon rewarded him with the Legion of Honor, and the people of Paris packed into the streets when he died, following his cortege all the way to Père Lachaise cemetery.

Should you visit Paris and the 9th arrondissement in the autumn, check with the fire brigade at 28 rue Blanche for their grape-harvest celebrations. Their pinot noir and chasselas are hardly great vintages, but the bottles are collectors’ items. At all seasons, for a genuine, inexpensive taste of old-time Paris, head back downhill to Chartier, at 7 rue du Faubourg Montmartre, a huge, noisy canteen serving 1,500 diners daily, where little has changed since the Guide Bleu first mentioned it back in 1863.

L’Auberge du Clou Named after the nails on which painters hung their works. Debussy used to liven up the evenings at the piano. Romantic atmosphere and gourmet cuisine. 30 ave Trudaine, 01.48.78.22.48. website

Originally published in the April 2008 issue of France Today; updated in December 2010