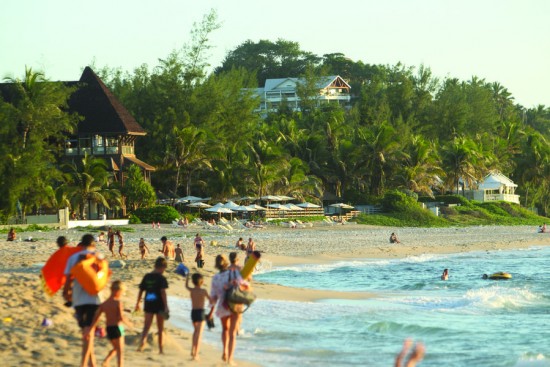 France has four départements, two territories and five collectivités territoires overseas, in the Atlantic, Indian and Pacific Oceans. Here’s why you should venture to ‘France overseas’…

Now’s the time to escape the cold January and February drizzle, and as luck would have it, France’s overseas territories all enjoy clement temperatures, the most pleasant of all being at this time of year.

Martinique and Guadeloupe enjoy a temperate, tropical climate that remains in the mid-20ºCs throughout the year, while Réunion Island in the Indian Ocean and the islands of French Polynesia, such as Tahiti, can hot up to around 30ºC during the early months.

Water sports enthusiasts are spoilt for choice throughout France’s overseas départements and collectivités territoires. Réunion and Martinique are equally famed for their surfing, paragliding, kite surfing and jet skiing – not to mention the inland hiking, mountain biking and horseback riding.

The islands of Guadeloupe are a yachter’s paradise, while scuba diving is particularly popular in Saint-Barts and New Caledonia, the latter boasting the world’s largest lagoon (a UNESCO World Heritage Site) and its second biggest barrier reef. The lagoon doesn’t just boast exceptional marine and vegetal biodiversity, it’s also home to humpback whales, who escape the Antarctic waters to frolic in its warmth.

It’s easy to forget that France boasts some of the world’s most unspoilt tropical beaches, diverse rainforests, exotic plants and wildlife, and teeming coral reefs. Réunion’s geography is as varied as it is jaw-dropping, ranging from the lunar-like volcanic landscape of the Plaine des Sables to the forests, mountains, waterfalls and rivers of Green Réunion. Life is lived in harmony with the island’s natural surroundings.

If idyllic beaches are what you seek, you’ll be spoilt for choice in France Outre-Mer. The Pacific island of Tahiti is renowned for its turquoise shallows, white-sand beaches and colourful flowers (best worn around your neck or in your hair). But how to choose between the coconut palms of Martinique, the infinitely romantic beaches of La Désirade in Guadeloupe, and the secluded, forested shores of Wallis and Fortuna?

On the west coast of Guadeloupe Island you’ll find the Parc des Mamelles, a rainforest zoo housing endangered species. There you can observe racoons, monkeys, snapping turtles and even jaguars in their natural habitats. In French Guiana, France’s only territory on the South American continent, dazzling tropical birds and nesting ‘luth’ tortoises inhabit the extensive mangroves along its coastline.

Mayotte, in the Indian Ocean, is also abundant in plantlife and animals. The ‘maki lemur’, found only on this island, lives alongside the ‘roussette’ (fruit bat or flying fox), while dolphins and sea turtles bathe in the Mayotte Lagoon.

Hit up Martinique for traditional Créole specialties that mix French finesse with Asian influences and spices grown on the island, such as cloves, cinnamon, vanilla and nutmeg. Meanwhile, Réunion’s cuisine is spicy and hearty, favouring rougailles (dishes in a tomato-based sauce) and curries, washed down with the local tipple of choice: rum. Learn more of that at the Saga du Rhum museum, at an old family distillery, where traditional secrets of the craft are divulged.