A Weekend in Calvados, Normandy 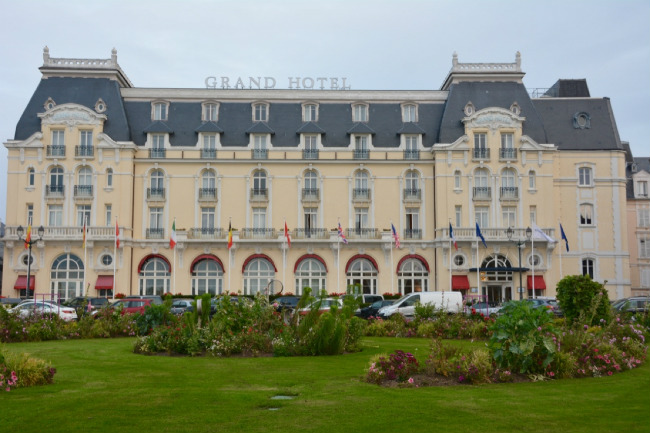 In the northwest of France, a couple of hours drive from Paris, Normandy’s Calvados department feels a world away from the capital city. The area beckons visitors with its spectacular seaside, tranquil rolling hills, historical significance, cultural offerings and regional culinary specialties. Indeed, a trip to the land of William the Conqueror makes for a delightful weekend escape.

If the walls could talk at the Grand Hôtel in Cabourg, what stories they could tell. Built on the seafront in 1907, the aptly named hotel has welcomed stars of stage, film and literature, most notably, Marcel Proust. The famous French author spent extended periods of time here between 1907 and 1914 working on his epic book, In Search of Lost Time. More recently, the final scene of the critically acclaimed 2011 movie, The Intouchables, was filmed in the Grand Hôtel’s seafront restaurant, Le Balbec. Since 2009, the Grand Hôtel de Cabourg has been part of the MGallery By Sofitel, a collection of luxurious and historical hotels around the world. 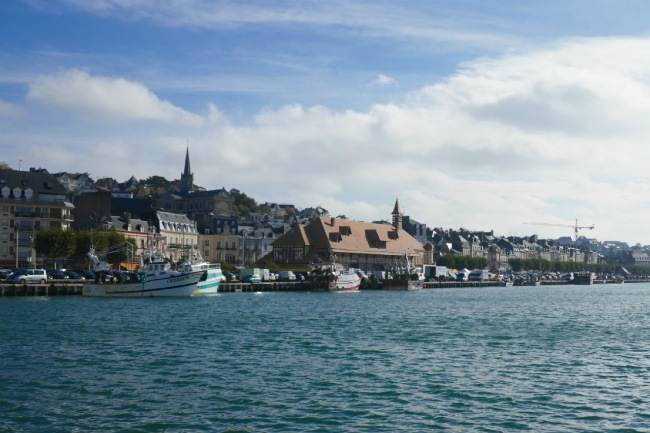 Although refurbished in a neo-Italian design, the hotel keeps its classic architectural elements. Soaring ceilings, grand crystal chandeliers and ornate moldings are seamlessly blended with modern touches of glass and stainless steel. Plush fabrics made from silk taffeta and velvet envelope the furnishings in shades of plum and orange. The massive windows in the common areas offer unobstructed views of the promenade, beach and sea. And with just 70 rooms and suites, including Proust’s former abode (room 414), the Grand Hôtel feels intimate and charming. Select a room overlooking Cabourg or the sea; both offer extraordinary views.

Stepping through the hotel’s revolving door onto the seafront promenade is instantly rejuvenating. Enjoying aperitifs in La Belle Epoque, while listening to a pianist tinkling the ivories, harkens to a bygone era. Whether a destination in and of itself or as a jumping off point for exploring the region, the Grand Hôtel de Cabourg is just that: grand. 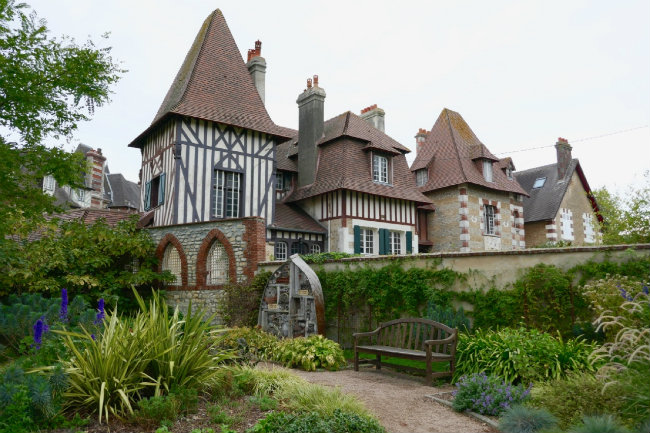 Norman fare is anything but light, though it’s certainly tasty. Probably most noted for its dairy, seafood, and apples, there’s no shortage of delicious things to try in Normandy. The grand cru of butter and cream is produced in Isigny-sur-Mer and serves as the base of many of Norman dishes. The area’s most well-known soft cheeses–Camembert, Livarot and Pont-l’Évêque–are made from cow’s milk and carry A.O.C. (l’appellation d’origine contrôlée) distinctions. Camembert dates to 1791 and Pont-l’Évêque to the 12th century, making them some of the oldest cheeses from France. 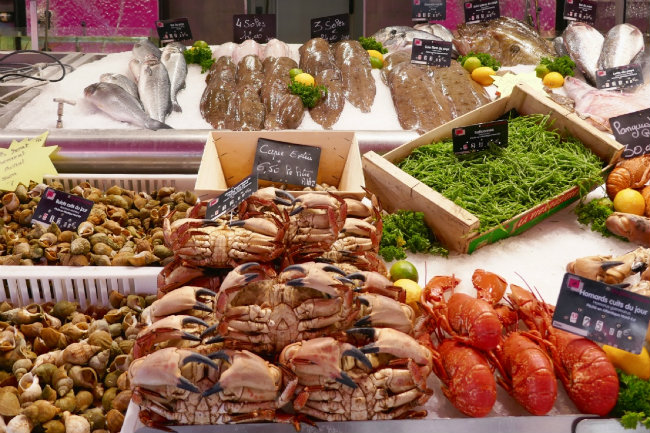 With nearly 400 miles of coastline, Normandy is heaving with fresh seafood. Some of France’s most important fishing ports are located in the Calvados department, such as Port-en-Bessin and Trouville-sur-Mer. Mussels, shrimp, oysters, scallops, mullet, sole, sea bass and mackerel are plucked from the water and available to eat a few hours later. Try the seafood natural or Norman style, which includes plenty of cream. 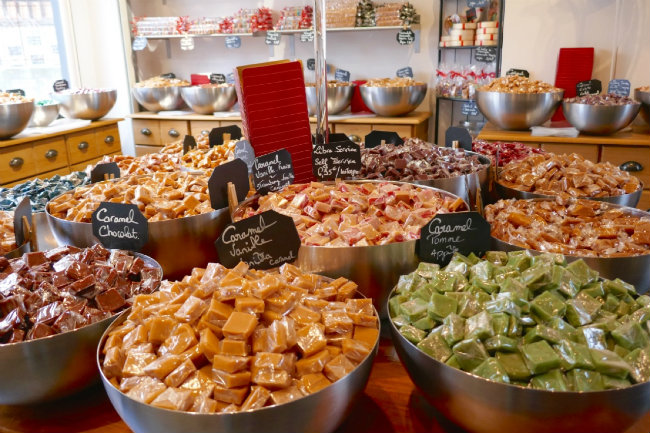 Apples aren’t just for eating in Normandy. There are 400+ kinds of apple cider produced in Pays d’Auge. The light, refreshing alcoholic drink was awarded with an A.O.C. distinction in 1996. Calvados is a spirit produced in the region, where cider is distilled and aged a minimum of two years in oak barrels. Enjoy the apple brandy in coffee, as an aperitif, or between dinner courses with apple sorbet, known as a ‘Trou Normand.’ Another alcoholic apple drink worth trying is pommeau, a blend of 2/3 unfermented apple juice and 1/3 Calvados. For a closer look, visit producers in Pays d’Auge along the 25-mile Cider Route.

Sweet treats abound in Normandy, but forget about the polished pastries of Paris. Given the number of apple and pear trees, there are plenty of tarts and cakes made with the fruits, especially during harvest seasons. Fruit jams and confiture de lait, which is essentially a spreadable dulce de leche, are sweet touches over fresh bread. Indulge in a hand-full of caramels, which are made with full-fat milk, butter and cream. Variations include flavors such as salt, pistachio and hazelnut. A typical dessert from the area is teurgoule, a blend of rice, milk, cinnamon and sugar that’s cooked for hours in an oven. 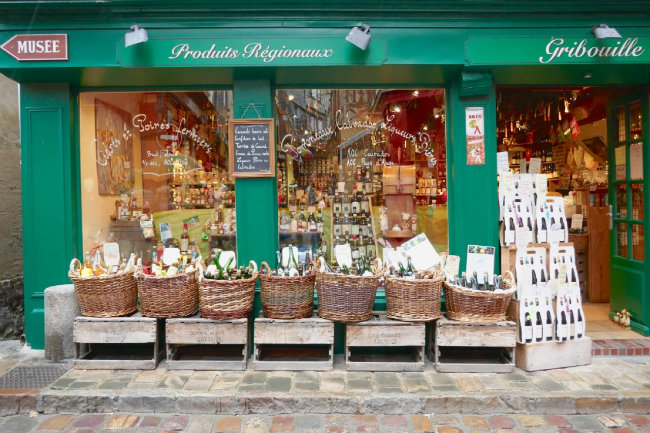 Train service arrived in Cabourg in the late 1880s, and with it the wealthy from Paris. As a result, Cabourg feels a bit like a fairy tale, with its massive half-thatched homes and meticulous gardens. Stroll through the main street and along the promenade. At low tide, racehorses pulling sulkies can be spotted training along the beach. Depending on the time of year, Cabourg is a fine destination for golf, horse races and various film and art festivals.

On the eastern edge of the Calvados department is the picturesque town of Honfleur. Walk along the U-shaped Le Vieux Bassin, a port dating to 1681. It’s surrounded by narrow houses built side-by-side. Varying in height and appearance, these unique homes were built between the 16th and 18th centuries. Wander the cobblestone streets away from the port for shops selling regional products and tiny cafés. Don’t miss Eglise Sainte Catherine. The 15th-century church is made entirely of wood and mimics the hull of a ship. 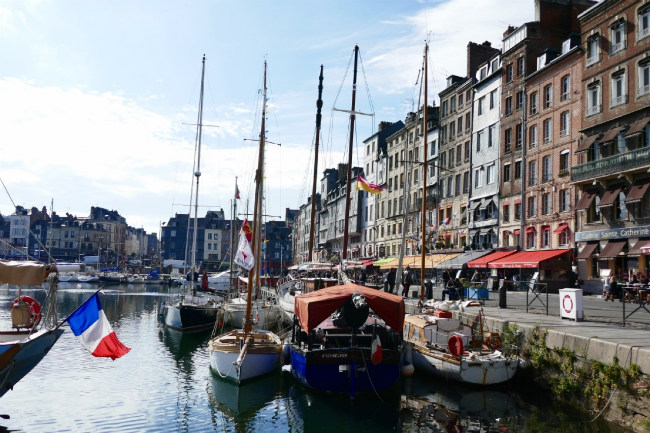 Trouville-sur-Mer is one of France’s most popular seaside destinations. Simply known as Trouville, this town is chock-full of character. Separated by the Touques River from its glittery neighbor, Deauville, Trouville is less ostentatious. Its history is rooted as a fishing port, which remains a large part of Trouville’s identity. Visit the Marché aux Poissons located on the waterfront for the freshest seafood around. Take away the purchases or have them prepared and delivered to the high-top tables at the market. For a more traditional dining experience, walk across the street to Les Vapeurs or Les Voiles, two restaurants operated by the same owner. These spots are dining institutions in Trouville. For a bit of gambling, head to Casino Barrière for machine and table games.

With over a thousand years of history, two nights isn’t enough time to discover the Calvados department. Colleville-sur-Mer and the Normandy American Cemetery and Memorial; Bayeux and its famous tapestry; and Caen and the Abbey of Saint-Étienne all deserve spots on a Norman itinerary. 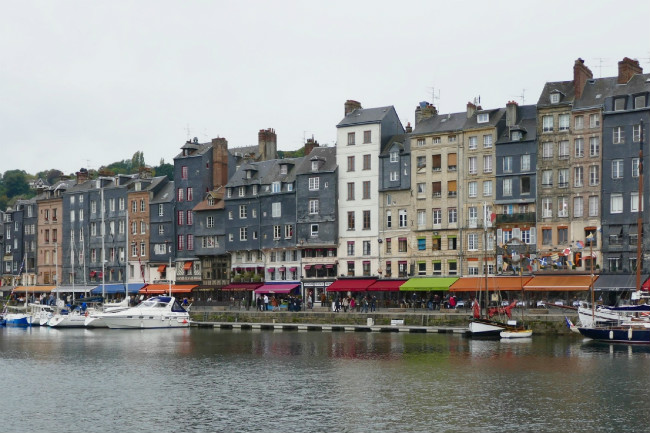