Mussels from the Bay of Mont Saint-Michel 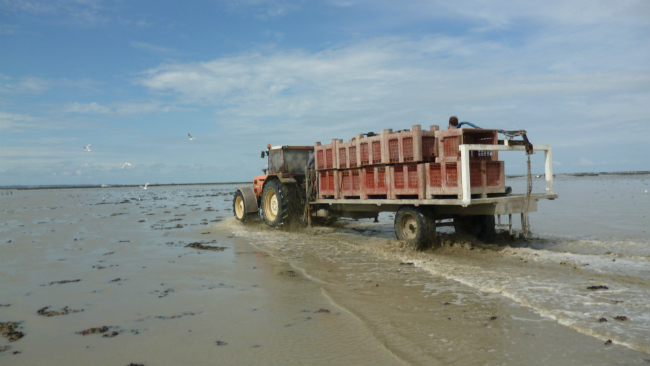 Folklore has it that in 1235, an Irishman (or Scotsman, depending on which version you believe) named Patrick Walton was shipwrecked in the Bay de l’Aiguillon in the Charente region of France. Accustomed to trapping seabirds in nets strung from wooden posts driven into the ground near the shoreline in his native country, Walton continued the practice only to find that instead of attracting seabirds, mussels began to grow instead.

The cultivation of mussels, known as ‘bouchot’ mussels, continues in the Charente to this day but it was only in 1954 when this practice of growing mussels on wooden posts was introduced to Mont Saint-Michel Bay. 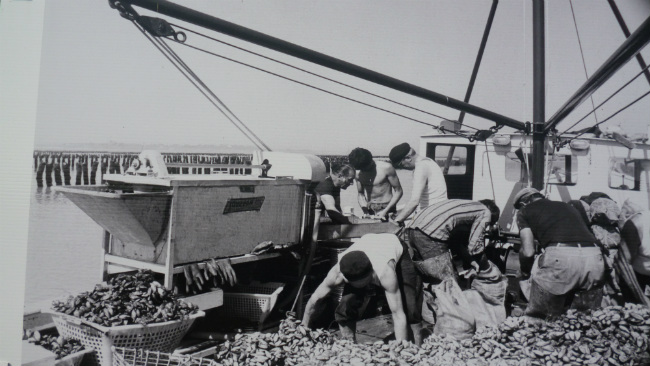 The bay of Mont Saint-Michel stretches 30 kilometres with its unique tidal range of up to 15 metres. A famous quotation likened the tide coming in to be equal in speed to that of a galloping horse.

The bay is more famous, of course, for the Mont St Michel which attracts 3,000,000 visitors each year. But mytiliculture– the cultivation of mussels– not only keeps Mont Saint Michel bay on the map, but it also provides employment for around 300 people on an annual basis. 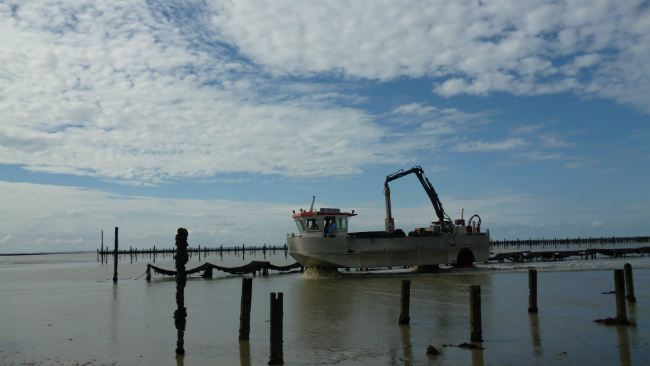 The largest UNESCO-listed bay in Europe, the bay of Mont Saint-Michel encompasses some 500 square kilometres of which 300 square kilometres between Cherrueix and St Benoit des Ondes contain the forest of wooden posts (les bouchots) that produce 10,000 tonnes of mussels annually and 25% of all the mussels grown in France.

Although Mont Saint-Michel Bay proved a fertile growing ground for mussels, it proved unsatisfactory in attracting the seed mussels (larves de moules) to the cords strung from the posts. Consequently in May, hundreds of kilometres of seeded ropes (usually coconut rope) are loaded onto lorries in Charente and brought by road to Mont Saint-Michel Bay where initially they are strung horizontally between the bouchots some five kilometres from the shoreline. 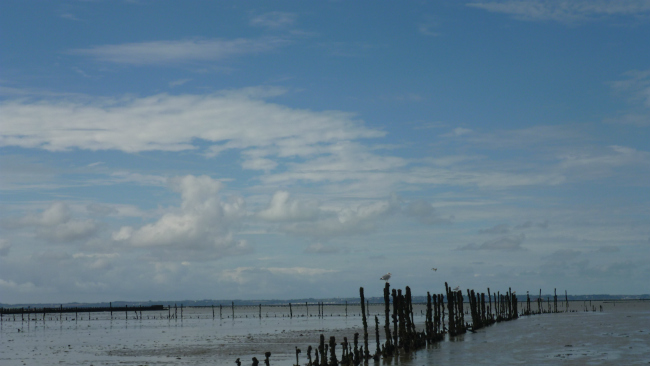 More than 5 kilometres from the shore. Photo: Marilyn Brouwer

After the summer when the mussels have established themselves the cordes (ropes) are moved further out and wound around the vertical bouchots until the following July when they are harvested.

From the shore, it is difficult to grasp the vast area the bouchots cover, nor to appreciate their strange, unearthly, architectural presence. Fortunately, both Le Train Marin in Cherrueix and La Mytili-Mobile in Le Vivier-sur-Mer run touristic trips in tractor-driven ‘buses’ out to the bouchots– wellingtons usually provided! Measuring 2.4 metres high, the bouchots stand in pairs of lines 100 metres long and 25 metres apart. (These distances were expanded from their original format to help prevent diseases spreading and to hopefully deter over production. Even so, one bouchot can produce 50-60 kilos of mussels!) 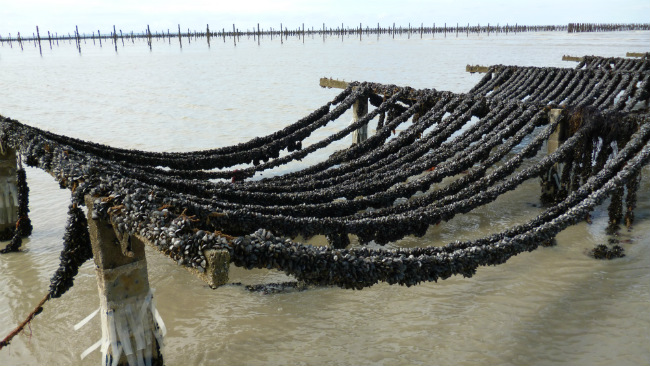 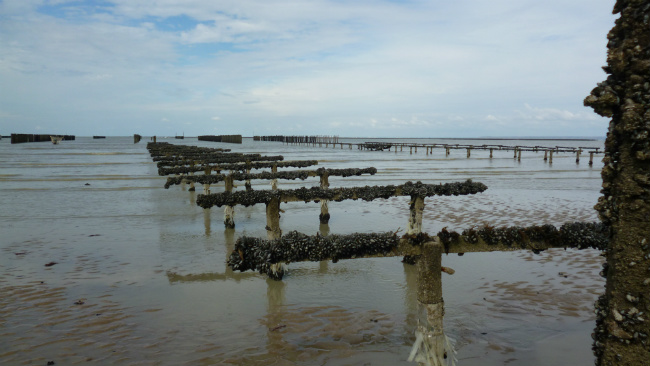 The mussels from Mont Saint-Michel Bay were awarded the coveted AOP (l’appellation d’origine protégé) status which involves committees checking not only the quality of the mussels but also the waters of the bay. For this reason, no definitive dates are given in July for the official beginning of the season nor in February for the end of the season. (Forget the old maxim of only eating mussels when there is an ‘R’ in the month!) 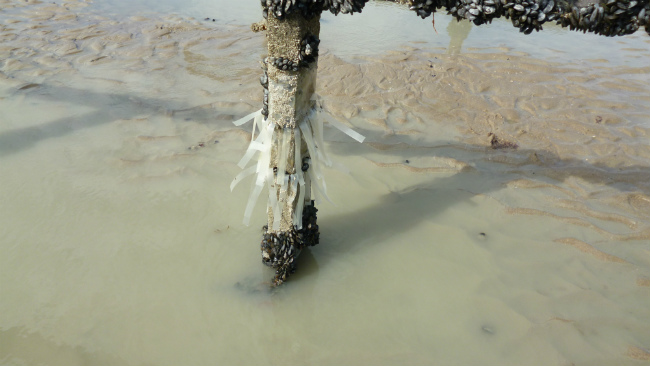 Because of the unique tidal system in Mont Saint-Michel Bay, the mussels grow underwater at high tide but are exposed to the sea air 12 hours each day. Plastic strips are attached to the vertical bouchots to deter diving sea birds and likewise to the bottom of the horizontal posts to deter marauding crabs. The mussels have to reach 4cms, usually in the first half of July and are smaller than usual mussels, orange coloured, tender, and have a slightly sweet taste. Tip: Many restaurants in Mont Saint-Michel Bay refuse to serve any other mussels but these AOP Moules de Bouchots de la baie Mont Saint-Michel, so if you see mussels on the menu in June they are not from Mont Saint-Michel Bay. 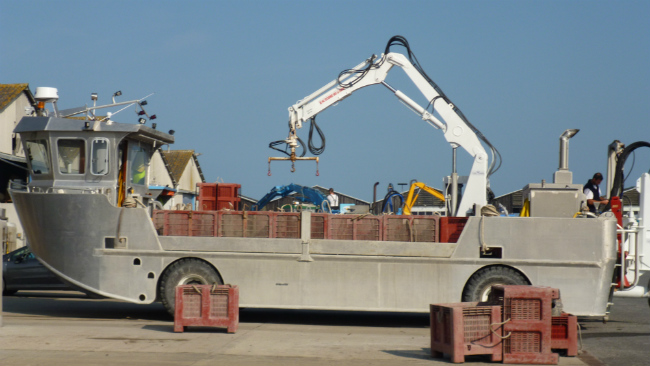 The harvesting of the mussels begins at the port of Le Vivier-sur-Mer where at low tide aluminum, amphibious boats trundle five to seven kilometres across the sand on tracks made from discarded mussel shells. This usage of the discarded shells– some 20-30% of the harvest– is proving contentious with locals and environmentalists alike, with the mayor of Vivier-sur-Mer, himself in the moules business, promising a solution even though he will be ‘shooting himself in the foot’. 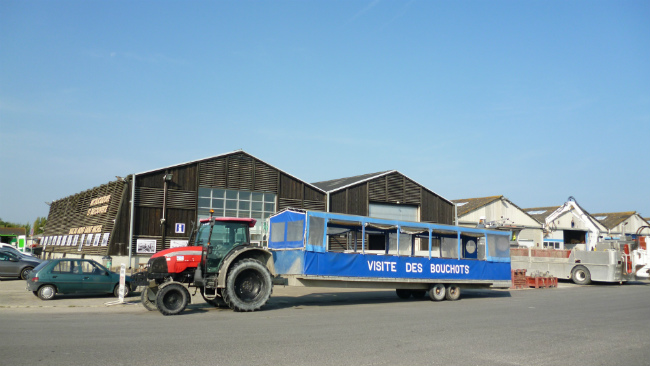 The amphibious boats are fitted with grabbing equipment which scrapes the mussels from the posts onto the boat. The mussels are then subjected to a 24 hour purification process before ‘declumping’. This is a machine which separates the mussels from each other and shreds the rope and nets. From there the mussels are cleaned in a brushing machine before being finished by hand to remove any other waste material; crabs, algae or broken pieces of mussels. 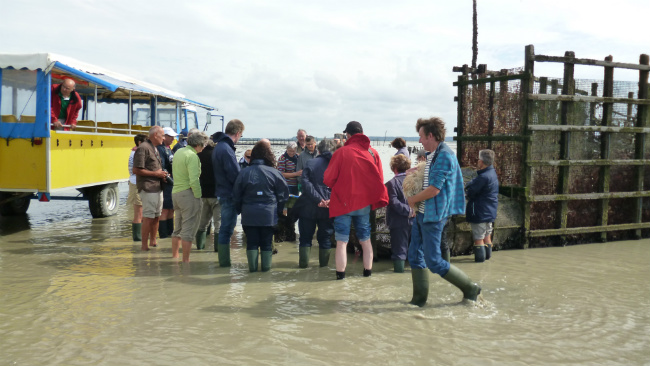 Bagged up the mussels are finally ready for sale, to be transported throughout France or distributed to the many restaurants and sea food huts alongside the bay.

If you are lucky enough to be there between July and February when the pavements are awash with signs for moules frites, make sure you stop.

I promise you won’t regret it. 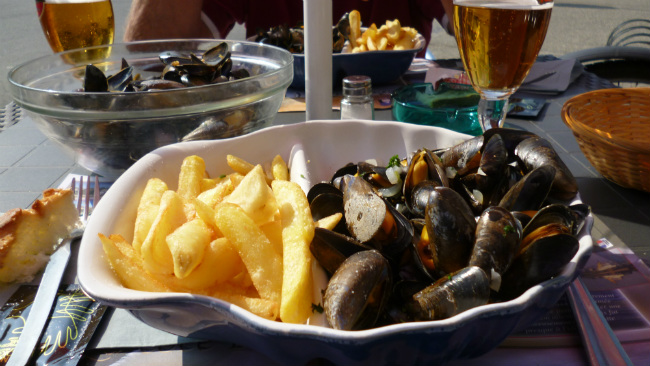 Previous Article The Michelin Stars Arrive in Washington D.C.
Next Article A Weekend in Calvados, Normandy