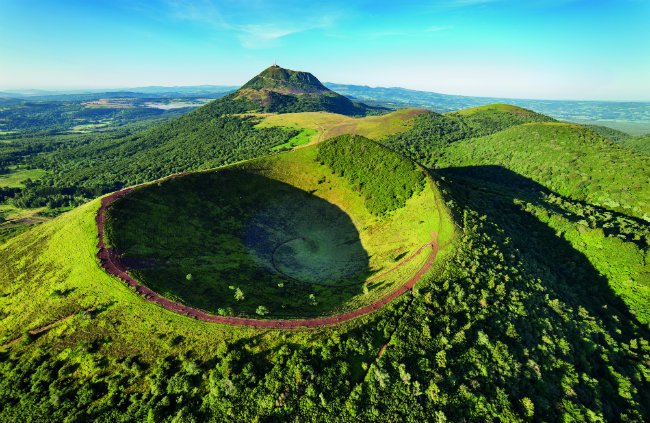 Auvergne is untamed and rugged – a region of forests, mountains, remote farmland and dormant volcanoes, but it also has urban sophistication and culture. Dominic Bliss provides a fascinating perspective on this unique place

Sooner or later, in Auvergne, you’re going to stumble across a volcano. Don’t worry, though. They’re all dormant – well, for the moment, anyway.

There are scores of them in this region, sprouting up above the skyline, huge, green, gorgeous pustules. They lie in what’s known as the Parc Naturel Régional des Volcans, a 1,500-square-mile natural park that forms the backbone of Auvergne. Some rise so high above the Massif Central, they could compete with mountains. Others have that classic conical shape with craters gouged out of the top – like something out of the movies, while many are little more than hillocks. Hike across the region and you’ll regularly find solidified lava or black volcanic soil beneath your boots. Fortunately none of the volcanoes has erupted in the past 5,000 years. 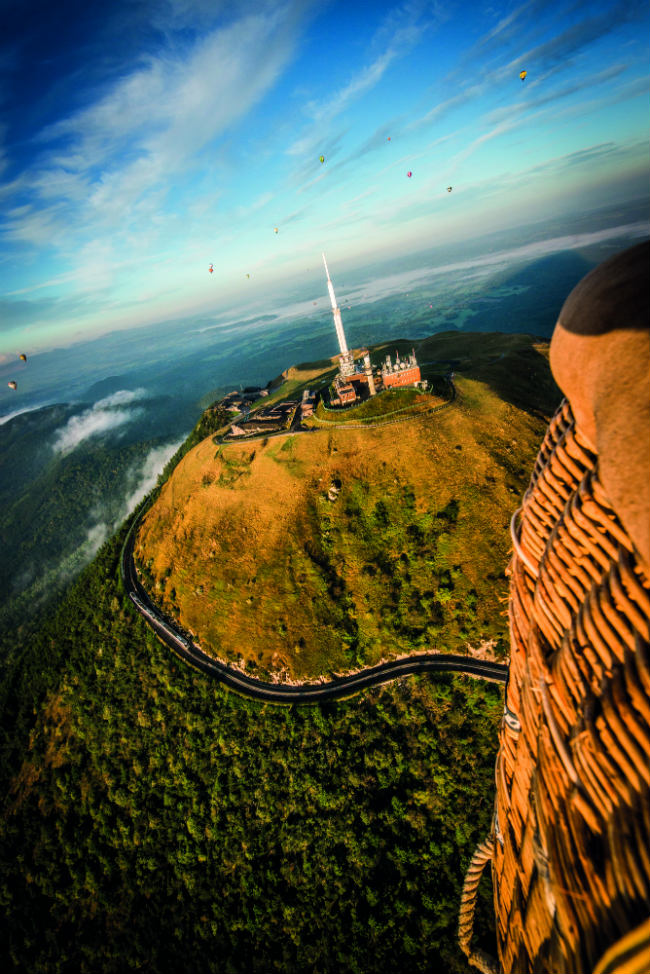 A great way to appreciate Auvergne is by hot-air balloon. Photo: © AUVERGNE-RHÔNE-ALPES TOURISME

TAKE IT TO THE TOP

There are three ranges altogether. In the north, just west of Clermont-Ferrand are the Monts Dômes, an impressive range of around 80 cinder cones, including the tourist-friendly Puy de Dôme, at 1,465 metres. If you’re fit, then make the hour-long climb to the top. Otherwise you can travel on the very impressive cog railway, the Panoramique des Dômes. It takes 15 minutes to reach the top, and you can enjoy the spectacular 360-degree views of the surrounding landscape on the way. One of the rewards at the summit is a view of the flocks of paragliders circling high above the Puy. 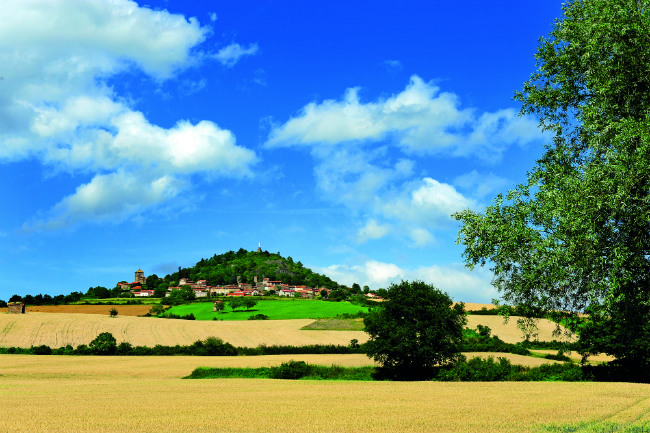 The second range is the Mont-Dore, dominated by the 1,855-metre-high Puy de Sancy, the Massif Central’s highest peak and a popular – if slightly limited – winter ski resort. Finally, in the southern half of the park are the rugged Monts du Cantal, with their skyscraping crests and deep glacial valleys.

Given Auvergne’s very rural location, slap bang in the middle of France, countryside pursuits are very much in abundance. To the east of the volcanic park, on the other side of the Allier valley, is the Parc Naturel Régional Livradois-Forez. While it may lack the dramatic geology of its western neighbour, it is certainly wild enough and large enough (1,150 square miles) to get well and truly lost in. 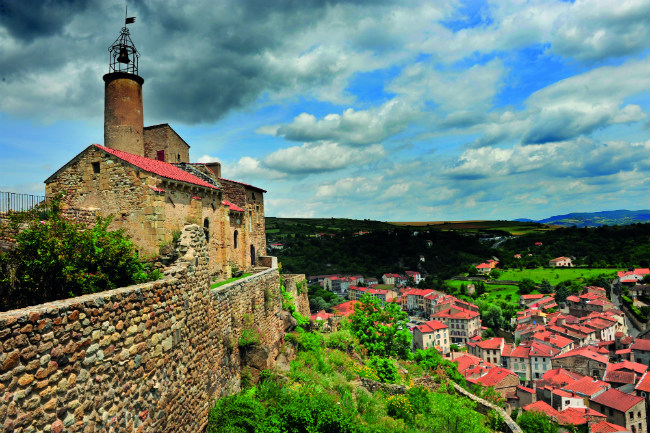 Other areas you may (or may not) wish to get lost in include the Gorges de l’Allier (with its salmon, steep cliffs, white-water rafting and canyoning) and the Forêt de Tronçais which, at 27,000 acres, claims to be the largest oak forest in Europe. In the far south of Auvergne is the start of a long-distance hiking and mountain biking trail (Grande Randonnée) called Le Chemin de Stevenson. Commencing just south of Le Puy-en-Velay at the village of Le Monastier-sur-Gazeille, it snakes southwards out of Auvergne and into Languedoc-Roussillon. 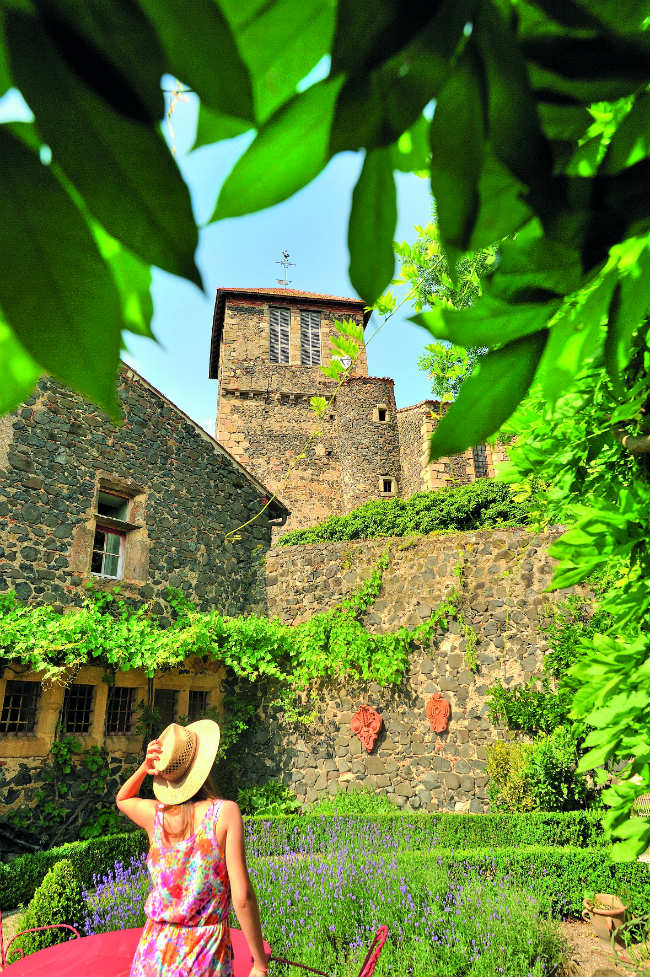 Usson is listed as one of the “plus beaux villages de France.” Photo: © AUVERGNE-RHÔNE-ALPES TOURISME

Since France’s big administrative shake-up in 2016, Auvergne has become part of a huge, sprawling government region called Auvergne-Rhône-Alpes. But this stretches 27,000 square miles from the edge of the Limousin, all the way to the Alps and the Swiss border – an area so big and so varied that most people still choose to see Auvergne as its own distinct region. It comprises four départements: Allier in the north, Puy-de-Dôme in the middle, and Cantal and Haute-Loire in the south. 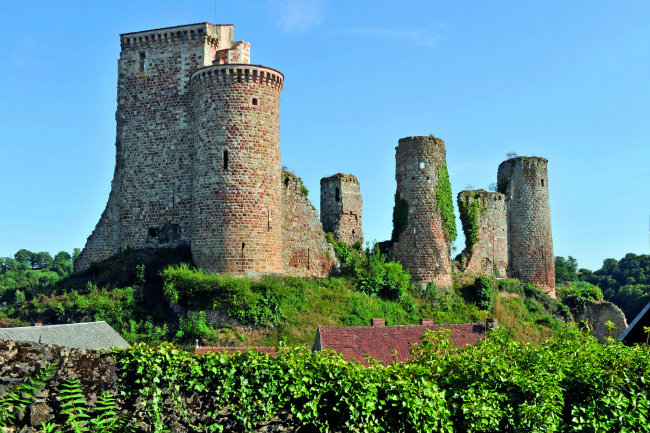 The remains of le Château d’Hérisson, once owned by the Dukes of Bourbon. Photo: © AUVERGNE-RHÔNE-ALPES TOURISME

It’s true that much of Auvergne is unforgivingly rural. Some villages are so isolated that children have to weekly-board at their schools. In winter, it’s not unusual for farmers to be cut off for weeks at a time by deep snow. Some years it’s so deep that you can cross-country ski across the fields without having to worry about the fences buried beneath the snow. But, despite this rural side, don’t forget about Auvergne’s towns and cities. 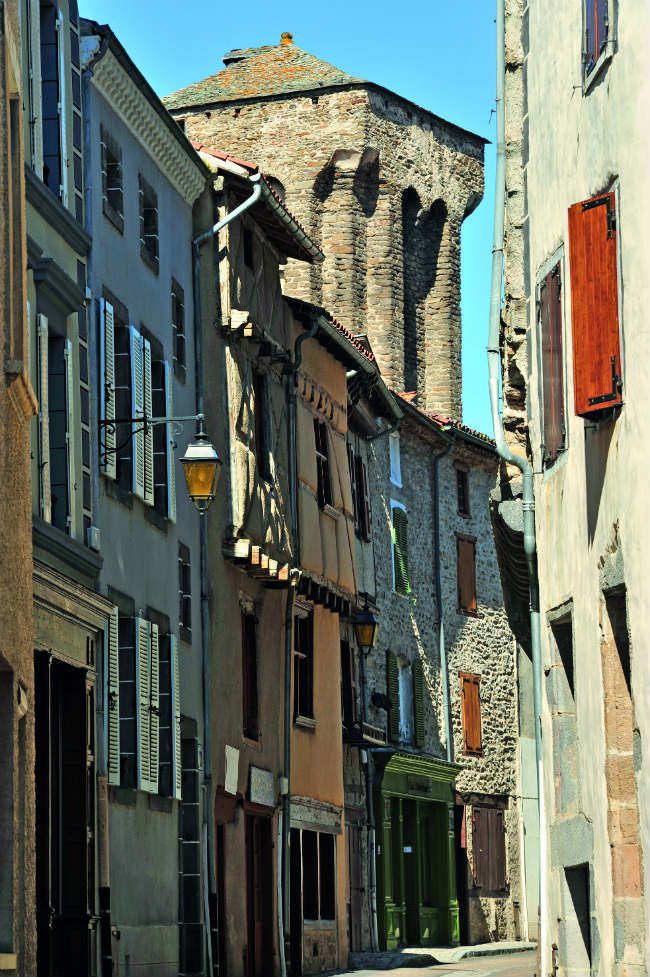 Arrive by aeroplane from the UK and you’re almost certain to touch down at Clermont-Ferrand Auvergne Airport, just east of the region’s capital, Clermont-Ferrand. Ryanair recently started serving this city with direct flights from London Stansted between the months of March and October.

Clermont-Ferrand certainly has plenty to offer. Many of its old industrial factories have been demolished, placing more emphasis on its wide avenues, cafés, fountains, boutique shops and galleries. Everywhere you look, the local volcanic lava stone dominates. In particular, it gives the twin-turreted Cathédrale Notre-Dame-de-l’Assomption a distinctly Gothic feel. Admire the stained-glass windows and, in summer, climb the tour de la Bayette for amazing views of the region. Clermont’s other great church is the Basilique Notre-Dame-du-Port, a Romanesque beauty that was granted UNESCO World Heritage status back in the 1990s. Nine centuries before that, it was right here that Pope Urban II launched the first crusade, triggering decades of bloody conflict with the Occitan-language rallying cry “Deus lo volt!” (“God wills it!”). 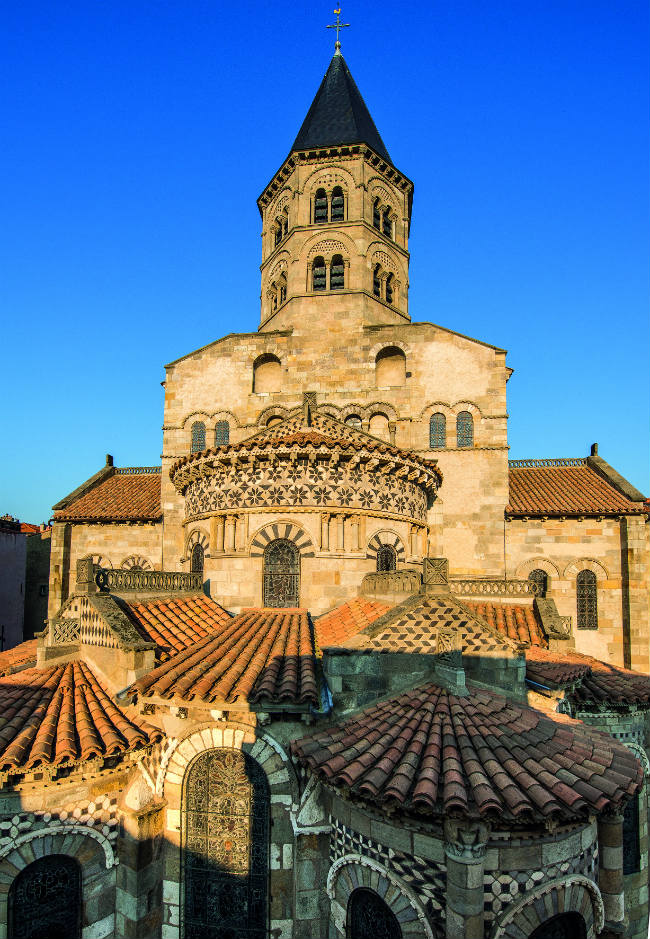 God may or may not will you to visit L’Aventure Michelin, a museum next to the enormous Michelin factory that celebrates the world-famous rubber empire, and where kid-friendly interactive exhibits abound. Another great visitor attraction is ASM Experience, a rugby union theme park affiliated to Clermont’s legendary local team ASM Clermont Auvergne. Here you can test your skills with the oval ball, commentate on matches like a sports journalist and enjoy a stadium tour. 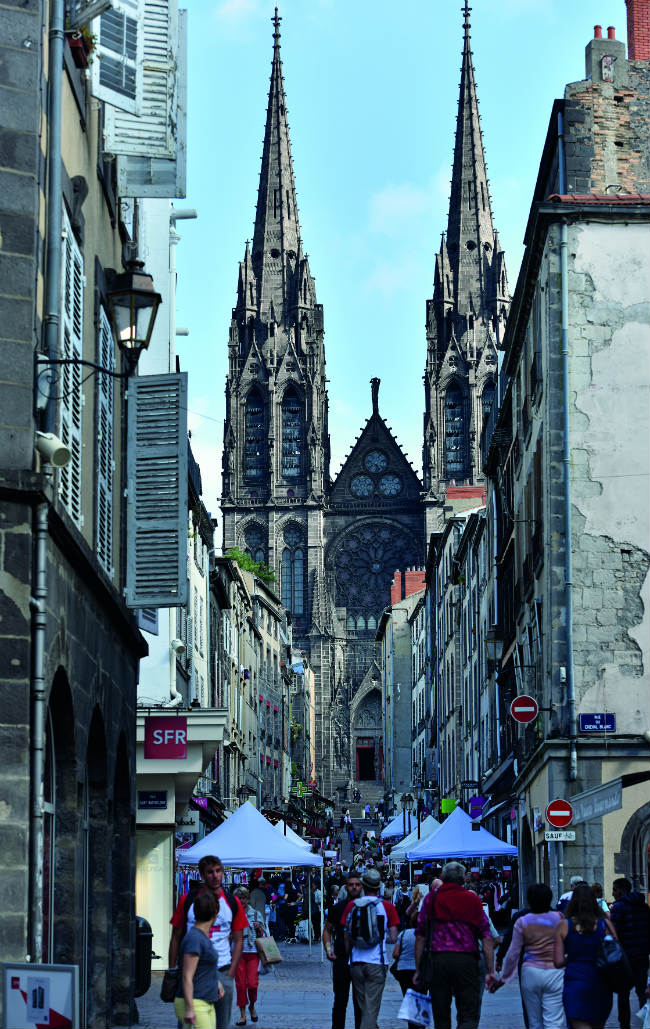 The cathedral in Clermont-Ferrand towers above the city’s streets. Photo: © AUVERGNE-RHÔNE-ALPES TOURISME

A TALE OF TWO VICHYS

Fifty kilometres north of Clermont is the rather beautiful city of Vichy. Tourists have one of two reactions when you say Vichy. Either they think of its Second World War collaborationist past, or they imagine immersing themselves in its spas and glorious architecture. Yes, let’s not forget that, during the Second World War it was the seat of Marshal Philippe Pétain’s puppet government. But that meant its buildings weren’t damaged by artillery. Wander around the city today and you’ll spot elements of Art Nouveau, Art Deco, neo-baroque, neo-gothic, neo-classical – it’s all here, as resplendent today as it was before the Nazi-appeasers so rudely took over. A short stroll around Vichy’s centre will give you ample opportunity to absorb it all. 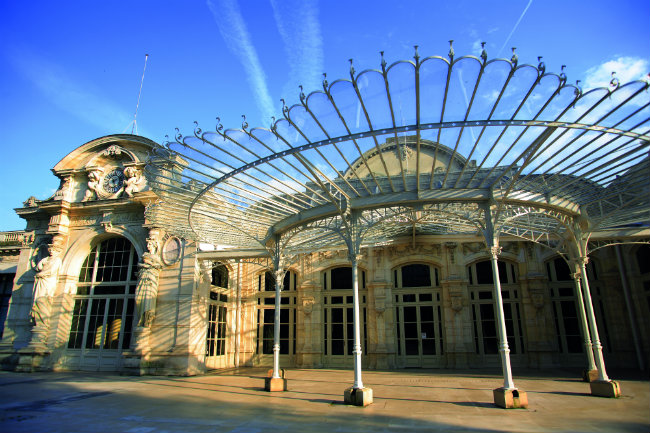 The Art Nouveau flamboyance that is home to Opéra de Vichy. © AUVERGNE-RHÔNE-ALPES TOURISME

Then there’s the city’s healthy side. Everywhere you look you’ll see spas and world-class sports facilities. Older visitors flock to the former, while younger, fitter tourists make the most of the latter. This city of just 25,000 inhabitants has football and rugby pitches, an athletics track, myriad tennis courts, a hippodrome, climbing wall, an archery range, a 50-metre-long swimming pool, omnisport centre, nautical centre, two 18-hole golf courses, a 100-hectare sporting lake and an indoor boulodrome. So don’t forget your trainers. The place positively spells out health and fitness. 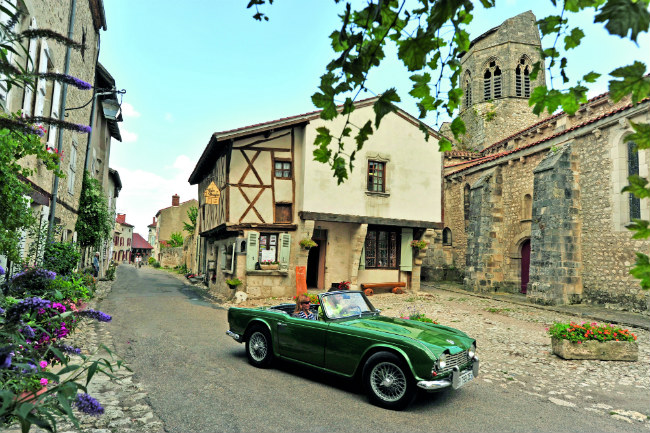 Medieval town Charroux is one of the most beautiful in France. Photo: © AUVERGNE-RHÔNE-ALPES TOURISME

Another Auvergnate city well deserving of a (lengthy) visit is Le Puy-en-Velay. Its skyline, alone, is worth the long, twisty drive up the mountain roads to get there. Against the backdrop of mountains and volcanoes in the surrounding countryside, there’s the 130-metre-tall Rocher Corneille, with Virgin and Child atop it, a bit like a miniature version of Rio de Janeiro’s Christ the Redeemer. There’s also the Chapelle Saint-Michel d’Aiguilhe perched on the 80-metre-high lava pinnacle known as the Rocher Saint-Michel d’Aiguilhe (with 265 steps to the top); then there’s the Cathédrale Notre-Dame du Puy with its six-domed roof. To visit all three you’ll need to fuel up on plenty of the world-famous Puy lentils before you set off. 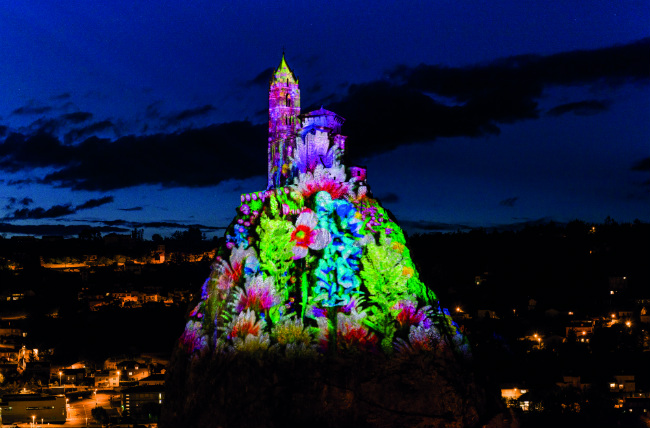 Auvergne is also home to nine official ‘Plus Beaux Villages de France’: Charroux, Usson, Montpeyroux, Tournemire, Arlempdes, Blesle, Lavaudieu, Pradelles and Salers. If you only have time to visit one of them, opt for the latter. You could easily spend an afternoon happily wandering the cobbled streets, ending your tour in the stunning central square called Place Tyssandier-d’Escous, which is encircled by 15th-century lava-rock mansions with little turrets, carved lintels and mullioned windows. 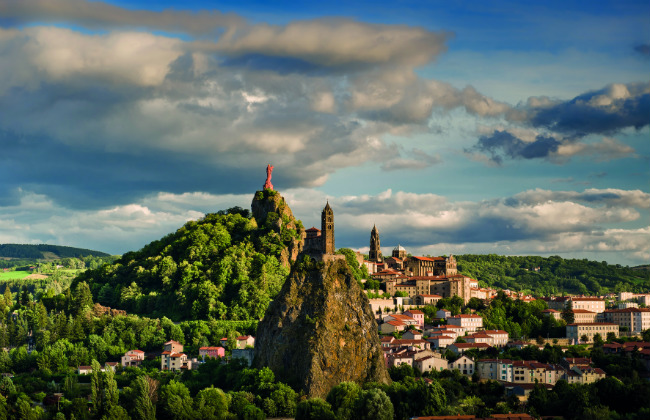 East of Salers is Puy Violent, an extinct volcano that rises nearly 1,600 metres above sea level. It’s not the highest summit in the Massif Central, but with its perfect triangular peak, it’s definitely one of the prettiest. Walk to the top on a sunny day and face north. Ahead of you will be the Parc des Volcans in all its glory: a dramatic reminder of the millions of years of geological turmoil that have created this wonderful place. 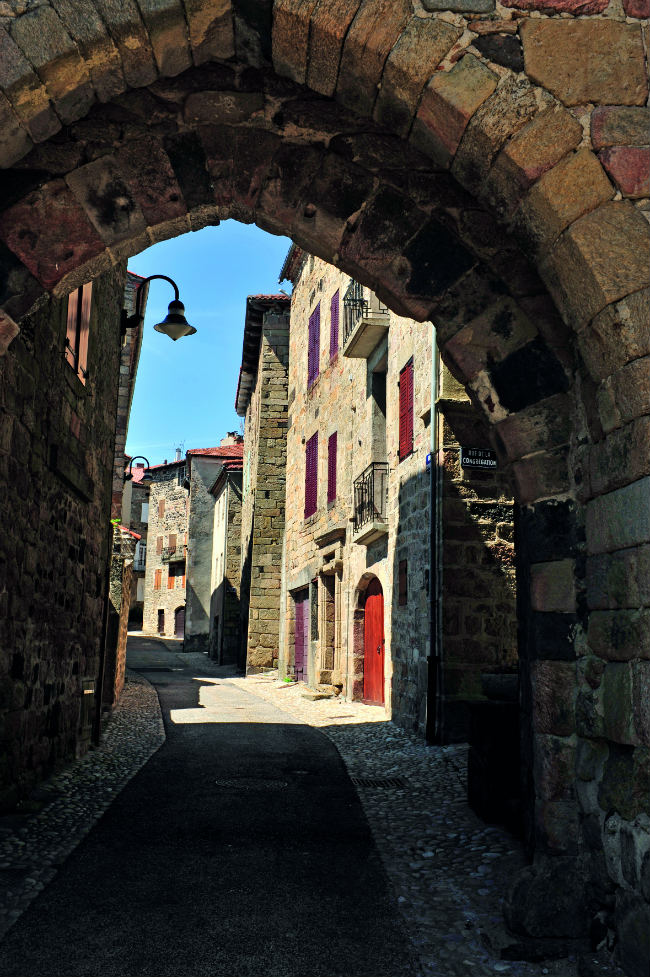 The beautiful village of Pradelles is the gateway to the Velay region to the south. © AUVERGNE-RHÔNE-ALPES TOURISME

A TASTE OF AUVERGNE

You wouldn’t call the food of Auvergne refined, but you certainly won’t go hungry. Based on the peasant diet that was popular for centuries across this rugged region, it includes lots of potato and cheese. 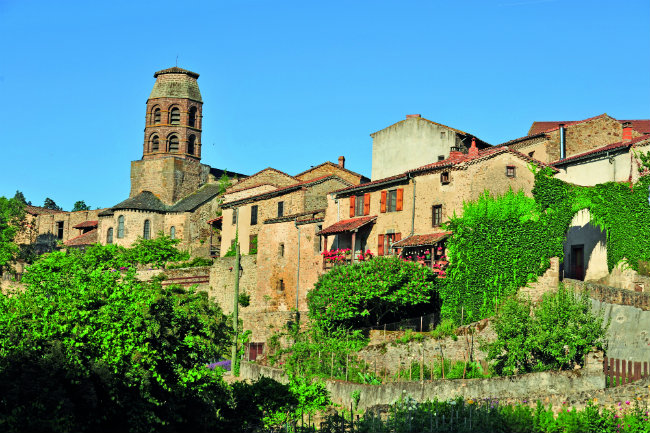 Lavaudieu gets its name from the Benedictine abbey established here in the Middle Ages. Photo: © AUVERGNE-RHÔNE-ALPES TOURISME

A popular soup is soupe au chou, with cabbage, pork, potatoes and lard, while the famous potée auvergnate is a hotpot with cabbages, potatoes, leeks, carrots, turnips and pork. And don’t forget about the world-famous green lentils from Le Puy-en-Velay, which feature in various recipes including petit salé, a delicious pork dish.

Steak is popular, too, thanks to the very obliging Salers Cattle from Cantal and the Charolais breed from Allier. The region enjoys five different AOP-labelled cheeses too: Saint Nectaire, Bleu d’Auvergne, Fourme d’Ambert, Salers and Cantal.

A famous local dessert is clafoutis, a fruit tart most commonly made with black cherries at its centre. Wine isn’t abundant here by any means, but two types stand out: Saint- Pourçain and Côtes d’Auvergne. Teetotallers are catered for thanks to local Volvic water. 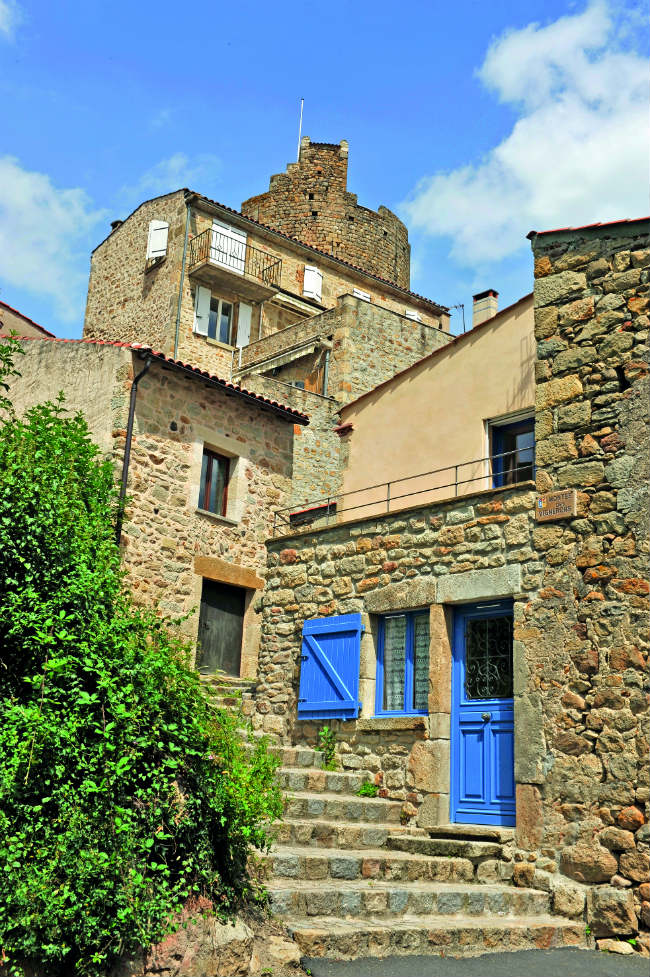 Hilltop Montpeyroux boasts splendid views and was once home to the Counts of Auvergne. Photo: © AUVERGNE-RHÔNE-ALPES TOURISME 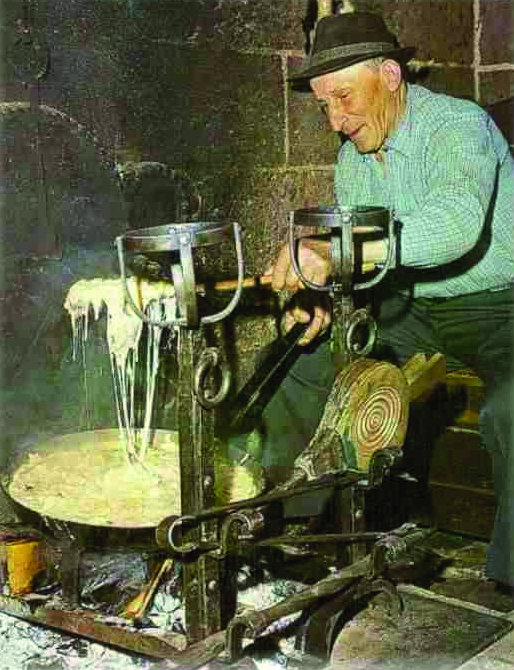