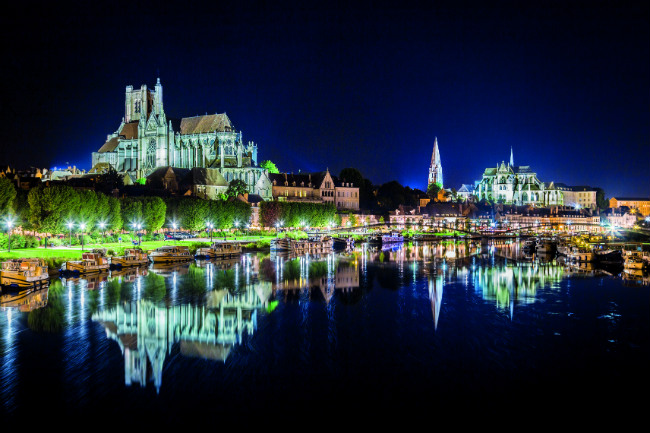 An ancient city that once stood on an important Roman road, Auxerre has always benefitted from trade and is now looking forward to the future with confidence. Guy Hibbert visits the capital of the Yonne département…

Even after 20 years of living in and travelling around France, it still has the wonderful capacity to surprise me. On a recent visit to Burgundy I was asked by our editorial team to file a City Focus piece on Auxerre (pronounced Osair). Auxerre… Somewhere south of Paris… A good football team (or they used to be)… Memories of hitch-hiking towards Lyon… These were the only paltry scraps of knowledge and memory I could come up with. But sometimes, arriving unprepared, and without consulting Google first, is the best way to see places fresh, without expectation. 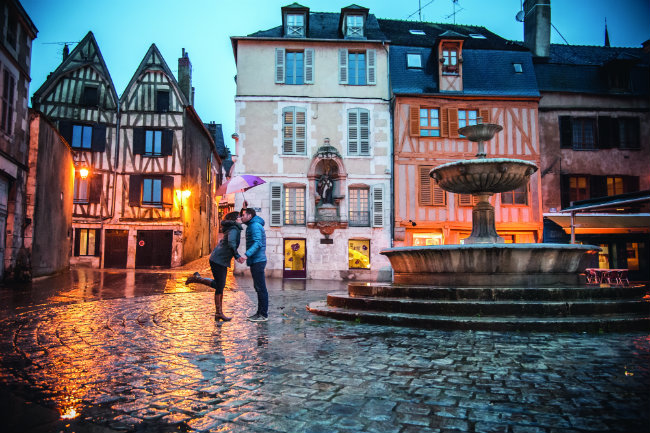 Auxerre is known as the ‘Gateway to Burgundy.’ Photo: Titouan Rimbault

On a sunny day in May we crossed the bridge over the impressively wide river Yonne and parked on the quai de la République. On the grassy, flower-bedecked quays people were out strolling and enjoying the warmth. From the pedestrian footbridge, the Passerelle de la Liberté, we took in a delightful panoramic view of the city, the medieval houses, the three church spires, the silvery river and, beyond, the green hills of Burgundy. They say it’s a city with the feel of a town – and seeing the hills within reach of the old city centre helped reinforce that impression.

Auxerre is old – very old. Officially labelled a Ville d’Art et d’Histoire, it dates back to Gallo-Roman times. Nearby archaeological excavations recently revealed a bas-relief showing a bunch of grapes dating from the 2nd century AD. In the 5th century the city’s most famous inhabitant was Saint Germain, who was Bishop of Auxerre from 418 until his death in 448. His tomb and relics can be visited in the majestic Saint-Germain Abbey, which is one of the three major ecclesiastical buildings that dominate the skyline of the city.

A once-great centre of learning, the Abbey is a treasure trove of monastic buildings including spectacular cloisters, chapter rooms and crypts. Among the masterpieces in its collections is the Shroud of Saint Germain, a fabric dating back over a thousand years. Just a five-minute walk away is the imposing Saint-Étienne Cathedral with its numerous and impressive stone sculptures depicting medieval figures. And finally, as if the choice of two places of worship was not enough (there being a strong Protestant community in Auxerre as well as the predominant Catholic religion) a third church, Saint- Pierre, was built in a mix of Gothic, Renaissance and Classical styles, within the winemakers’ district.

If you want to see what Paris looked like before Baron Haussmann’s 19th-century reconstruction, then hop on a train and wander around Auxerre’s medieval streets, where you will find more than 500 wooden houses, many rich with architectural detail from medieval times, such as carved corner posts and painted wooden beams. The 15th-century clock tower, part of the original Roman fortress walls, is an architectural gem, with two kinds of hand that allow it to display both the time and the phases of the moon. Next to the clock tower is the house of Guillaume Rousselle, known to French schoolchildren as Cadet Rousselle, the popular character in a rhyming song. (In the song he has three houses, but only one is marked here.)

The clock tower in Auxerre is a notable landmark. Photo: Jérémy Faillat

Auxerre has always been quite an affluent city. Centuries ago, before barges and motorised transport, huge floating rafts of giant logs cut from the forest of the Morvan were guided along the Yonne to the quays of Auxerre, where stone and wine would be loaded on top of the rafts for their onward journey to Paris. Crossing the river ran part of the Via Agrippa, the ancient road system that led (as all roads did) back to Rome. The road ran right through the ancient city and its citizens benefitted from the trade it brought. Later, with the illustrious prestige of the Abbey, the confluence of the river and the road, and a local landscape blessed with the right geography for vineyards, Auxerre’s success was relatively assured. To find out more about the city’s rich and diverse early history a visit to the Saint-Germain museum is a must.

Today, Auxerre makes a perfect day trip or short weekend break from Paris. As ever, gastronomy plays a big part in Auxerroise culture. Although there are currently no Michelin-star restaurants in the city, this is sure to change as there are so many good up-and-coming eateries you’ll be spoiled for choice. Truffles, snails, the Borvo smoked salmon, cherries, the creamy Époisses cheese and, of course, beef bourguignon, are just some of the classic local ingredients and dishes, but with new chefs eager to add a contemporary twist to their menus you are not going to be disappointed when eating out in Auxerre. Of special note are Le Jardin Gourmand, L’Aspérule and Le Bourgogne. It’s easy to overindulge in this part of Burgundy so some gentle exercise might be in order.

Walking and hiking are popular; so too is cycling along the Nivernais canal, or mountain biking if you feel more energetic. Or hire a boat and discover the Yonne and the Nivernais on your own or as part of a guided cruise. The local barge Hirondelle has wine-tasting cruises in the summer months. A more luxurious experience can be had by renting a private narrowboat. 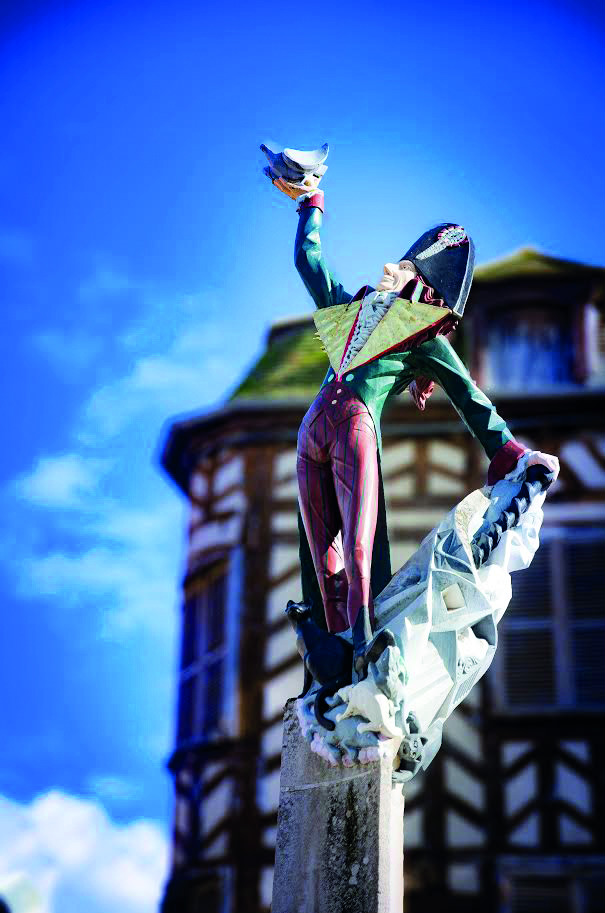 Although lesser-known than their celebrated cousins further south, Auxerrois wines are well worth discovering. The typical Burgundy cépages are cultivated in the region: Chardonnay, Pinot Noir, Aligoté and Gamay, but there’s also a rarity at the village of Saint-Bris where Sauvignon Blanc produces an unusually aromatic white wine. AOC Crémant de Bourgogne, the local sparkling wine, is an affordable alternative to Champagne and makes a perfect base for a Kir royal. Its birthplace is in the nearby village of Saint-Bris-le-Vineux, where you can visit the cellars of Bailly Lapierre, set in an old underground quarry. Guided tours are available.

Once upon a time the old town of Auxerre was alive with winegrowers and merchants and there were many vineyards within the walls of the town. Happily there is one still left, which you can visit: Le Clos de la Chaînette, one of the oldest vineyards in France. Classified as AOC Bourgogne, Le Clos de la Chaînette’s reds and whites are so sought-after that there’s a long waiting list just to buy six or 12 bottles of these rare vintages.

There is a tangible spirit and a sense of confidence about Auxerre which I enjoyed. There must be tremendous pride in the special ambience that comes from having a beautifully preserved city centre and the celebration of its long and noble history. 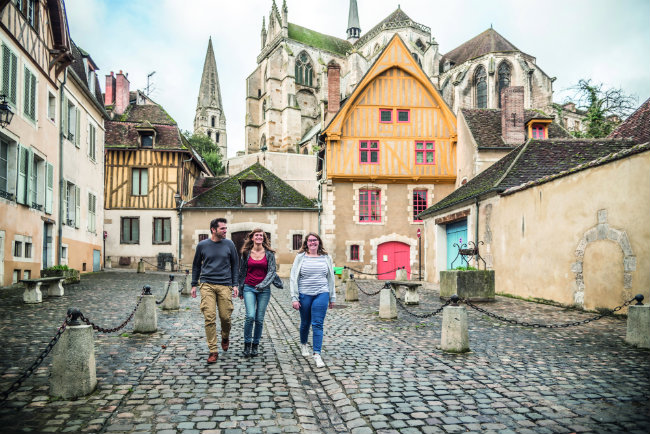 But this is not just a museum piece of a town, far from it. There is a great sense of enthusiasm here to preserve the links between an urban environment and an unspoiled countryside, which can be seen even from the heart of the city.

Nowhere is this enthusiasm better exemplified than in the decision to decorate the old concrete agricultural silos that can be seen from the quayside. A public vote was held to choose the citizens’ favourite art and the once-ugly towers – which were too expensive to raze – were promptly adorned with giant frescoes.

Now that’s a great example of allowing the people to have a voice in the future of their city. 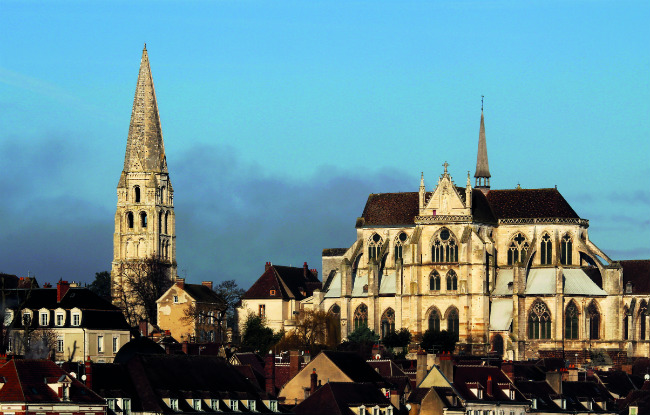 Side bar: 3 Must-See Essentials in Auxerre

Saint-Germain Abbey was founded in the 5th century AD by Queen Clotilde, a princess of the Kingdom of Burgundy, and became an important centre of education during the Carolingian Renaissance of the 8th and 9th centuries. Its crypts, which were built around the tomb of Saint-Germain (378-448), date to the Carolingian period and contain the mortal remains of the city’s bishops from that time. Among the oldest in France, they are worth visiting for their frescoes depicting scenes from the martyring of St Stephen – Le Jugement (The Judgment), L’Extase (The Ecstasy) et La Lapidation (The Stoning). Unique to France, these remarkable paintings were rediscovered by René Louis in 1927. 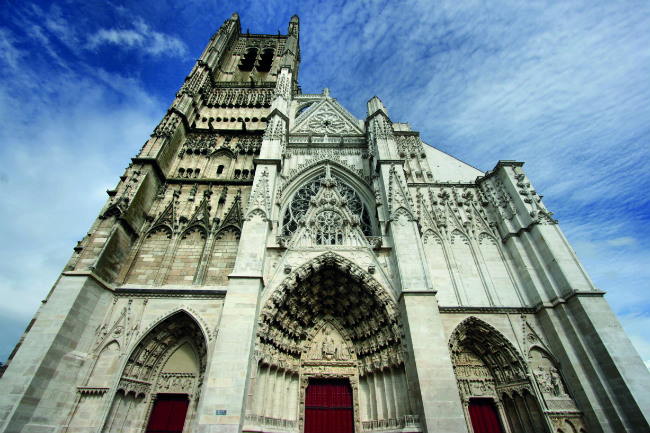 Famous for its large stained-glass windows, the Cathedral dedicated to St Stephen is a largely 13th-century construction over an 11th-century crypt built by Bishop Hugues de Châlon. Most of it was built in the space of 20 years (between 1215 and 1233) with funds from Guillaume de Seignelay, Bishop of Auxerre, and, after him, Henri de Villeneuve, his successor, and as such it is mostly in the Burgundian Gothic style. However, funds dried up after that and construction continued at a slower pace over the following centuries, until the final addition of the cupola, which was completed in the 1540s in the Renaissance style.

Producer and seller of prestigious Auxerrois wines, the urban vineyard of Le Clos de la Chaînette has been in the same hands since the middle of the 19th century; but records show there has been a vineyard here for much longer than that. It was first mentioned in the will of the Bishop Saint-Vigile in the 7th century AD as being part of the Abbey of Saint-Germain’s estate, and that makes this one of the oldest vineyards in France, for which we have a reliable record. Very much part of the heritage of Auxerre, as well as being part of the fabric of the city, the vineyard lies over four and a half hectares – of which four are classified AOC Bourgogne – in the north of the city. 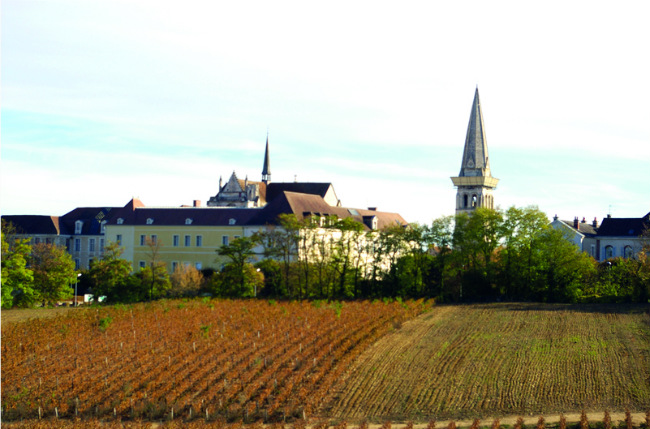