Buried Treasure: An Alternative Look at the Loire Valley 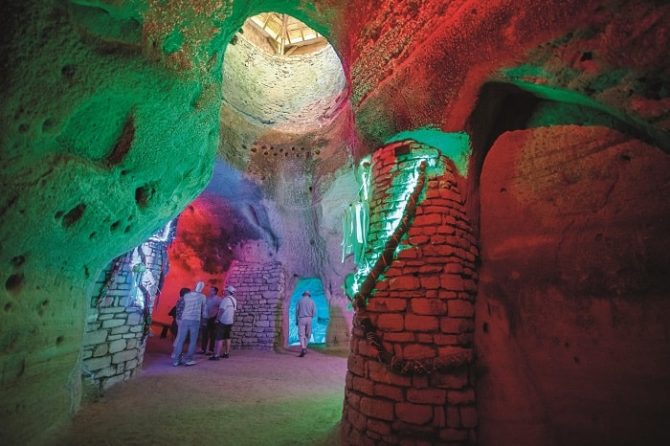 Chloe Govan discovers there’s more to the region than royal residences, delving deeper underground to explore the cave culture the tourist brochures don’t tell you about.

Sun King Louis XIV’s voracious appetite knew no bounds. While he bathed in champagne and feasted on lavish 30-course banquets boasting pheasant and partridge galore (his binges at the 426-room Château de Chambord left him with a stomach twice the size of the average wealthy diner, according to his autopsy), the poor and desolate elsewhere in the Loire Valley could barely scrape together enough meat for a modest meal, while languishing miserably in their mould-encrusted, rock-hewn caves.

Yet ironically, royal revellers in their vast châteaux shared rather more in common with the humble cave-dwellers of the region than one might imagine. Whether devilishly decadent or down-and-out destitute, wealthy and poor alike all resided in abodes made with the same 90-million-year-old limestone rock. In fact, some cave residents, including miners and builders, toiled tirelessly to help create the Loire’s stately homes. Therefore merely to join the hundreds of thousands who visit Chambord every year would scarcely scratch the surface of this valley’s multifaceted history.

Justifiably, châteaux attract the tourists: some are so enchanting they have inspired everything from centuries-old fairy tales to thoroughly modern Disney movies. Yet to come solely to see the châteaux of the Loire Valley would be akin to visiting London and seeing nothing more than Buckingham Palace. How about sidestepping the aristocratic art collections and royal residences and venturing further west into the hidden heart of this UNESCO World Heritage site for an authentic view of everyday people’s lives? 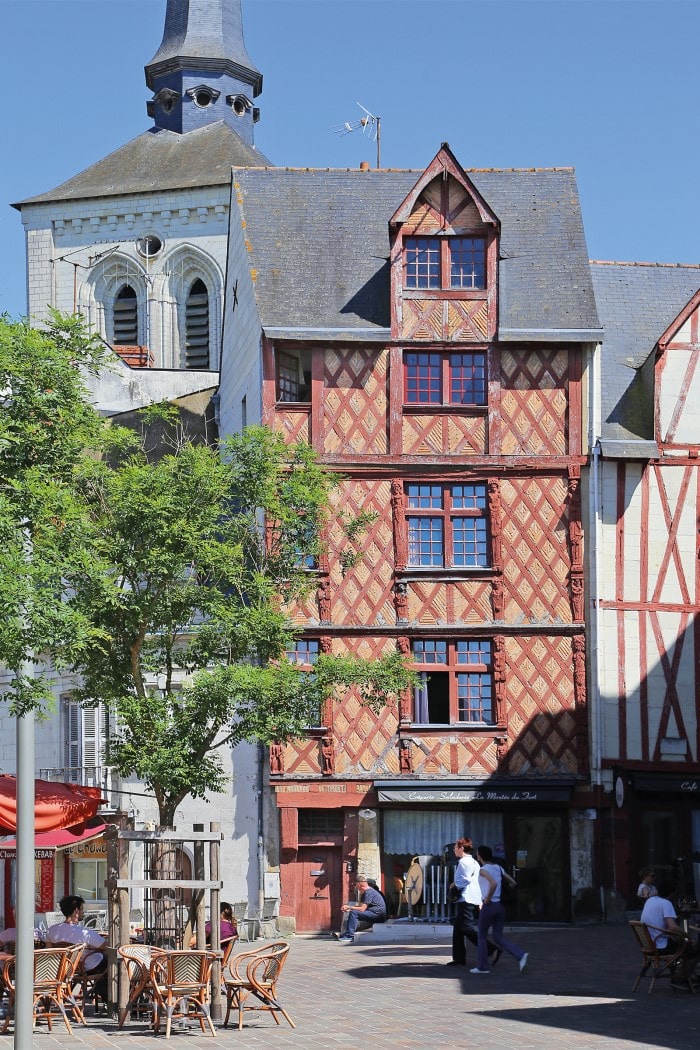 Saumur is the epicentre of alternative tourism. On the surface – with the exception of a rather imposing riverside château – the town’s outskirts might appear underwhelming. Those who have clinked champagne glasses while soaring above Chenonceau in a hot air balloon at sunrise, or wandered the vast forested grounds of Chambord might widen their eyes in astonishment at this less glamorous counterpart and ask, “Why Saumur?”.

Yet those in the know do not come to gawp at grandeur – au contraire, this is the country’s cave capital, with a vast network of underground tunnels lurking beneath unsuspecting day-trippers’ feet. This location – and those around it – could easily keep visitors captivated for a week, without setting foot in a single château.

Once a low-budget alternative to conventional housing, caves in the valley have been inhabited since the 4th century BC – and demand for troglodyte homes cut out of cliffs and quarries intensified over time. Just as the impoverished fishermen along the French coastlines once sold the tastiest cuts of seafood to wealthy diners and then fed themselves with the meagre offcuts that remained – sparking the bouillabaisse trend – locals mined and excavated tuffeau for the rich, sold it and then forged homes for themselves in the cavernous empty shells left behind.

Conditions – including mouldy odours from damp-ravaged walls – could be tough. Fast forward to the 21st century and cave dwellers are few and far between, with the exception of the bohemian and unconventional, who can purchase a rock-hewn abode to modernise for as little as €10,000.

Yet many abandoned caves have since been resurrected and transformed into thriving businesses, housing everything from silkworms to snails – and each attraction reveals secrets about the history of the valley’s inhabitants. For example, at Saumur wine merchants Bouvet Ladubay, visitors can experience the subterranean thrill of biking through an underground network of wine cellars, navigating several kilometres of darkness with a headlamp. Below their wheels lie the ruins of the 11th-century Abbaye de Saint-Florent-lès-Saumur. The abbey has known little peace over the years, enduring raids and accommodating troops during the brutal Hundred Years War. Finally, outsiders conquered it and monks endured the indignity of seeing their sacrosanct chapels transformed into stables for cattle – the ultimate insult. After it was eventually abandoned, its ruins were excavated and the limestone plundered for use in other monuments, such as London’s Westminster Abbey. Yet an underground cathedral stands here today, honouring the land’s war-ravaged past.

The domaine offers tastings from a brand that has won 500 medals and even served as the official wine supplier for the British Government, while its archives were designed by none other than Gustave Eiffel of Eiffel Tower fame. 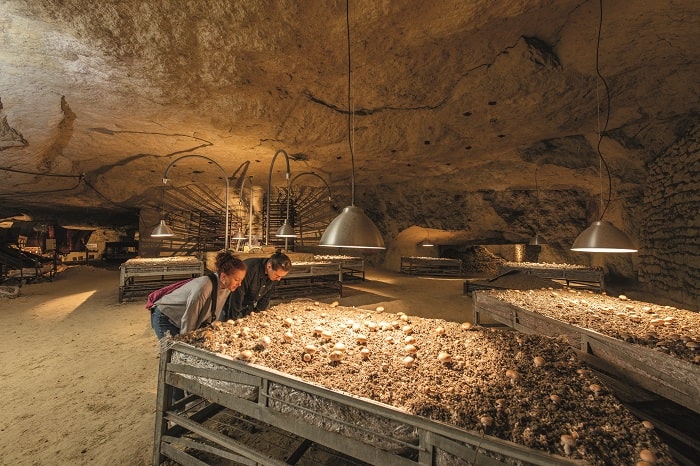 Nearby is the Musée du Champignon, a cave museum dedicated to the 250 varieties of mushroom grown there in conditions of 90 per cent humidity. Troglodyte tasting sessions, including wild mushrooms from the ‘Witch’s Cavern’ and healing versions used in Asian medicine, make this museum a must. Next to it is Pierre et Lumière, a quarry recreating the region’s top attractions in miniature. Sculptures ranging from châteaux Chambord and Amboise to the cathedral of Tours are shrouded in this womb-like cave. Just as ‘gentleman thief’ Arsène Lupin stashed away precious jewels and art treasures in a secret underground hiding place within the rocks of Étretat, here on the outskirts of Saumur, the same technique applies.

Although visitors may have swooned over the luxurious pink silk woven into the walls of châteaux such as Ussé, few casual admirers realise that it was actually produced locally by the cave-dwellers of the Loire Valley – and that the region once enjoyed a thriving silk industry. It was Louis XI who began the trend, commissioning paradise gardens filled with mulberry trees, the silkworm’s favourite delicacy, and urging housewives to stake their claim on the abandoned limestone quarries of the area to raise the worms while their husbands worked. Up to half of the population ended up involved in this female-led industry – from breeding the tiny caterpillars and processing the raw silk to weaving, spinning and ultimately selling the cloth.

There was a near-fatal blow in the 1600s, however, when Huguenot Protestants were forced to flee religious persecution: many sought refuge in Spitalfields, London, and took their trade with them. Then the farms were blighted by a parasitic fungus so lethal to insect life that it has been implicated as a malaria cure, simply by totally wiping out the mosquitoes that carry it. Even advice from Louis Pasteur could not save the silk of Saumur, and by the late 1800s, the industry had largely collapsed. Some vestiges of the past remain, however, such as the centuries-old silk-weaving loom from a 17th-century factory, today seen in the Musée Maurice Dufresne in Azay-le-Rideau. But to catch sight of a working silkworm farm today, visitors need to look a little further afield – for example, to La Magnanerie in Bourré, with its worm nursery and examples of traditional troglodyte housing. 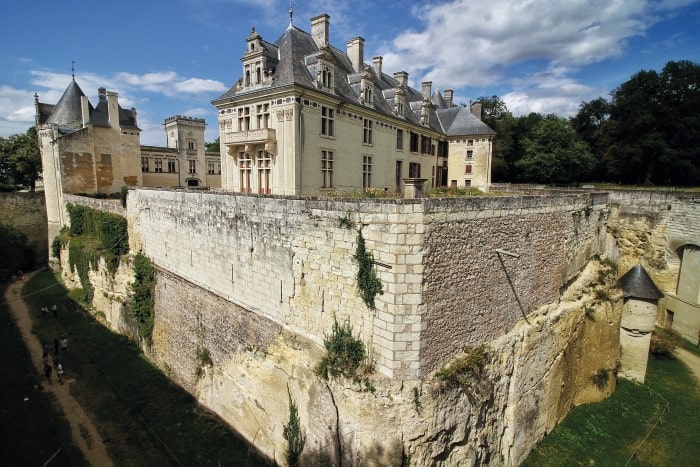 The remains of another historic silkworm farm can be found in Brézé, the legendary ‘château beneath a château’, where dry moats 18m deep also helped house the largest troglodyte bakery in all of France, with three huge ovens cut into the characterful subterranean fireplace. The underground labyrinth of rooms also includes a cask cellar, stables and a cave church christened the Cathedral of Images, where the château’s history is retold via visuals on the walls. Another heritage tradition was to farm snails, as the breeding farm Escargot de Mouliherne will demonstrate. Snail puff pastry? Snail tagliatelle? Or perhaps, combining two of the valley’s most prized products, mushroom and snail terrine? The farm, a foodie’s heaven, will reveal all. Other attractions include Le Mystère des Faluns in Doué-La-Fontaine, with its sound-and-light show projecting images onto rock faces which are millions of years old. Animations tell the story of the valley from the beginning, when it was located beneath the sea – and visitors walk with jellyfish in 3D without any snorkelling gear required! A five-minute drive – or, for the energetic, a 40-minute walk – away is Bioparc, a troglodyte zoo boasting 1,400 animals in a unique cave-side setting.

Over in Dénezé-sous-Doué, the Cave Aux Sculptures features more than 400 mysterious sculptures carved into the rock. It is believed that Protestant artists fled underground to escape religious persecution, finding self-expression through satirising public figures of their era and immortalising them in stone. 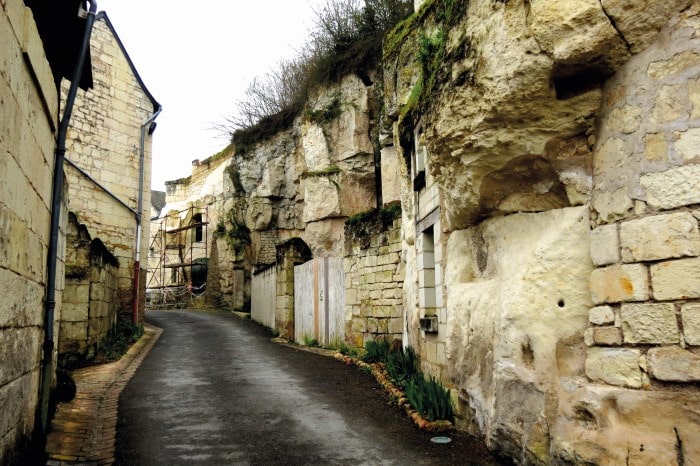 There are also entire troglodyte villages to visit, such as Turquant, where you can stroll through verdant vineyards, secret passageways framed by ancient, rock-hewn dwellings and traditional artisanal stalls. The cave restaurants here are favoured by locals and filled with repeat customers most nights, providing a refreshingly quirky alternative to flavourless tourist traps. The novelty of enjoying traditional centuries-old recipes in a cave setting is unmissable.

Turquant’s most unusual attraction is Les Pommes Tapées, a museum dedicated to the bizarre-sounding tradition of ‘apple-tapping’. The method of cooking the fruit before pounding it with a hammer is part of an ancient preservation technique to ward off rot: sailors of yore insisted on ‘tapped’ apples only for long voyages. Interestingly, the business still taps millions of apples a year. Caves play host to modern artistry too, such as glass-blowing and jewellery-making. Those seeking to stay the night might enjoy Demeure de la Vignole, an authentic cave dwelling dating back to the 17th century. It is kitted out with modern amenities and little luxuries such as complimentary local wine in each room, but the dichotomy of crystal chandeliers hanging from rough rock ceilings remind visitors of their unique surroundings.

Saumur and its surrounds are believed to boast the largest collections of troglodyte dwellings anywhere in the world, with Rochemenier and its troglodyte farms and chapel being another notable example.

Ultimately, everyone, from the poverty-stricken right through to the upper classes, could harness hugely lucrative cave industries as a means to build a better future for themselves. This included the everyday citizens of the Loire Valley – the ones the tourist brochures don’t tell you about. There’s much more to the Loire than fairytale châteaux – so after you’ve been wowed by the palatial parts, dig deep and discover valley’s fascinating cave culture.