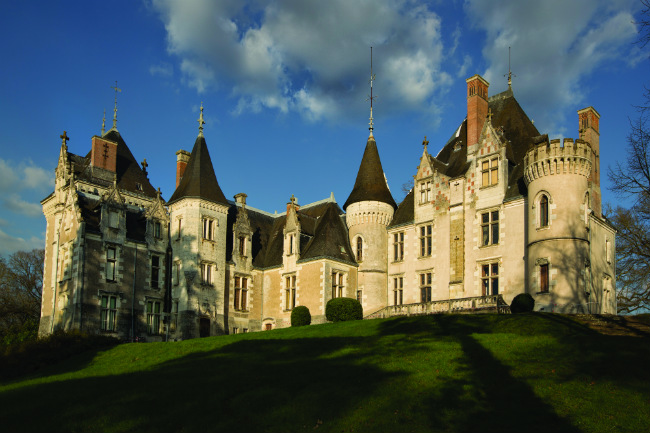 The high-profile châteaux of the Loire Valley are famous the world over for their fairytale exteriors, lavish art collections and glorious gardens. But for every big-name castle like Chenonceau and Chambord, there are dozens of smaller but equally enchanting properties tucked away along the UNESCO-listed Loire Valley.

I’ve come to one of the most discreet: the Château de Candé at Monts, a few kilometres south of Tours. In 1508, the Mayor of Tours, François Briçonnet, had a Renaissance-style country lodge built here for himself.

Despite being enlarged in the 19th century by Cuban aristocrat Santiago Drake del Castillo, the château could easily have remained one of the many hidden from public view. But on June 3 1937, the estate made headlines as the location for the marriage of former British King Edward VIII and his American fiancée Wallis Simpson. Wallis died 30 years ago last year in Paris at the age of 90 – the conclusion to a love affair that rocked the British monarchy. So as I cross the lawns towards the stone staircase leading to the main entrance, I feel that I’m stepping back into the history of three nations: Britain, France and the United States. 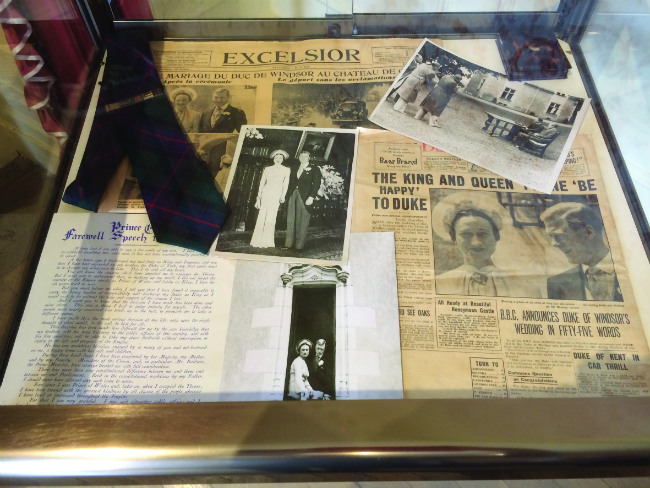 a collection of memorabilia is showcased.

In 1927, the Candé estate was bought by multimillionaire Charles Bedaux, a naturalised American who had been born and raised in France. Bedaux moved to America at the age of 20 to seek his fortune, an ambition he achieved with great success by devising a new approach to industrial productivity.

Bedaux and his American wife, Fern, set about modernising Château de Candé and installing state-of-the-art facilities to bring the property up to US standards. The turrets and gables of its exterior may be classic Renaissance, but step through the front door and you’re instantly transported back to the 1930s. 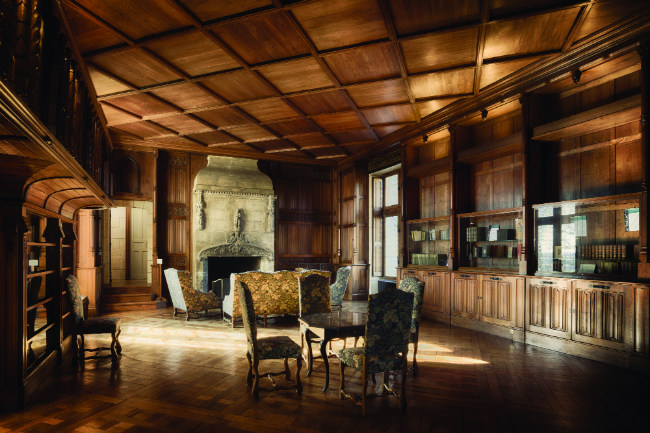 The glorious wood-panelled library is home to the Skinner
organ. Photo: Chanel Koehl

Bedaux upgraded the electrical system, installed central heating with radiators in every room, and improved the water supply. Each of the eight bedrooms was provided with its own bathroom, lavishly decorated with glass mosaics and equipped with heated towel rails. I’m seriously envious of Fern Bedaux’s sumptuous bathroom of turquoise, crystal and gold with its mirrored walls and garden views. Telephones were installed all over the house, most of them concealed behind wood panelling, except for the one on Charles Bedaux’s desk which was in constant use. He also employed a full-time telephonist who worked at an in-house switchboard linked to the main network in Tours. 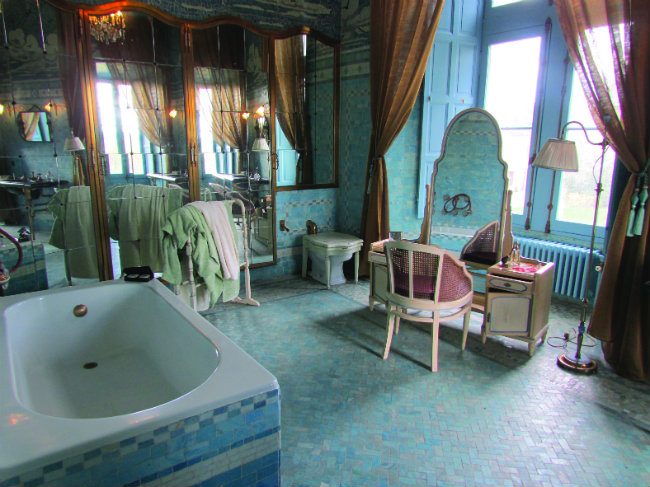 But Château de Candé could still have remained out of the public eye if it hadn’t been for Wallis Simpson. Born Bessie Wallis Warfield in June 1895, she was on her second marriage when she met the Prince of Wales, who became King Edward VIII in January 1936 upon the death of his father, George V. Edward was captivated, but marriage with an American divorcee was out of the question for the British monarch. So he chose to abdicate rather than live without his beloved Wallis. Edward was never crowned and lived the rest of his life as Duke of Windsor.

The couple couldn’t risk being together until her divorce was finalised. In December 1936, Wallis took refuge with American friends, the Rogers, on the Côte d’Azur. But when journalists discovered her whereabouts, her host asked a friend, Fern Bedaux, if she could accommodate the bride-to-be. 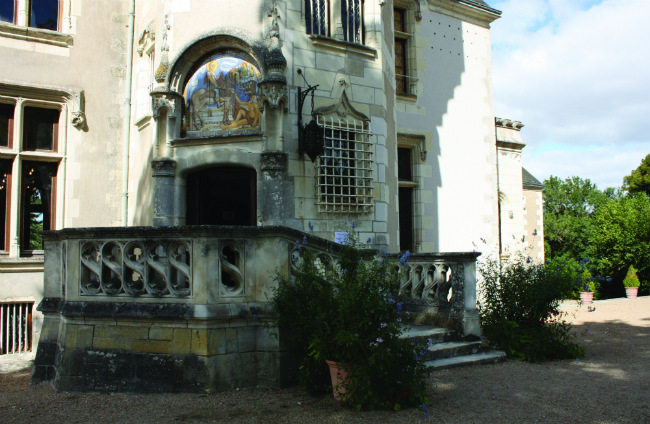 So on 10 March 1937, Wallis arrived at Château de Candé to stay with a couple she had never met. Today it’s not hard to imagine her reclining elegantly in a wood-panelled drawing room or relaxing in the spacious wooded park. Edward joined her on April 30, at which point Charles and Fern Bedaux left them alone and rented a suite at the Ritz Hotel.

Thanks to Charles Bedaux’s revolutionary new switchboard, the couple were able to keep in touch with friends and family across the world, but the marriage ceremony was a small affair. The civil ceremony, which took place first under French law, was conducted in the Library by the Mayor of Monts. 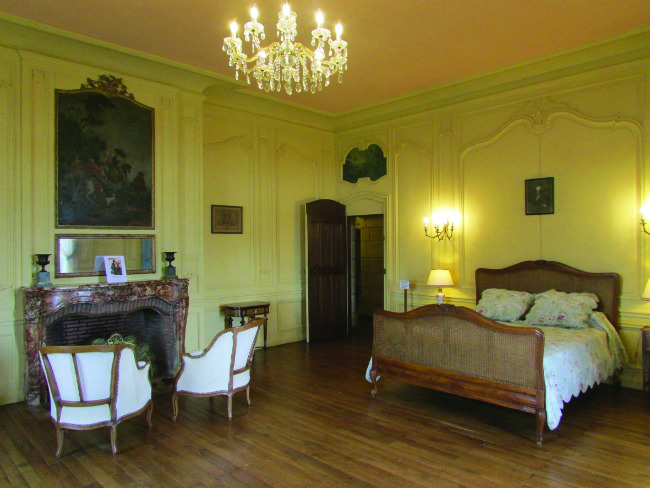 Charles and Fern Bedaux loved music, frequently hosting concerts here for their friends. Centrepiece of the library is an organ made by the renowned Skinner Organ Company from Boston, Massachusetts, one of just two instruments made by Skinner for European clients. Rising through three floors of the château, it can be played by an organist or be used with perforated rolls of paper to play automatically.

Linger a while in the library today and you’ll hear Mendelssohn’s famous Wedding March played by an invisible organist. And while you listen, look closely at the walls. In a corner by the fireplace, the couple have etched their signatures into the wood panelling, a permanent reminder of the historic event. 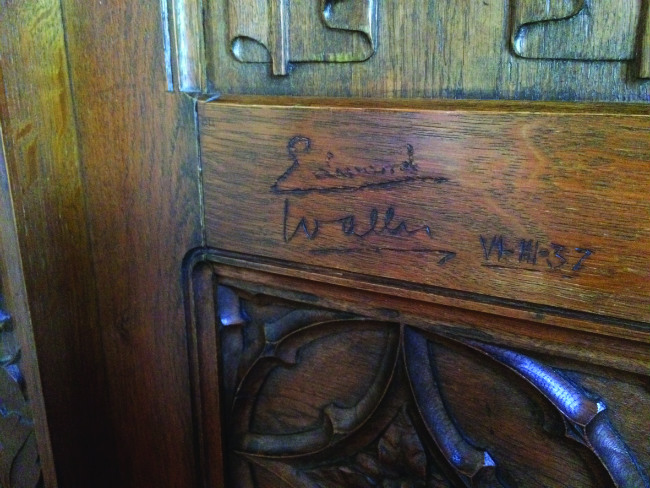 The Windsors etched signatures in the library

The civil ceremony was followed by a religious service conducted by an English priest next door in the smaller music room, a simple altar erected where a grand piano now stands. But whilst the altar may have long gone, there are reminders of the ceremony all over the house with archive photos by society photographer Cecil Beaton, as well as newspaper cuttings and other mementoes.

Wallis wore a close-fitting high-waisted silk dress in ‘Wallis Blue’ by Mainbocher to marry her Duke and a replica stands on a mannequin by the fireplace beside pictures taken on the day. Upstairs, you can see original items from Wallis’s wardrobe, as well as accessories bought from favourite designers such as Balmain and Dior, Balenciaga and Gucci.

After the ceremony, the couple sat down with Charles and Fern Bedaux and a dozen guests in the dining room with its leather wall-covering and original Renaissance ceiling. Photos were beamed across the world of the newly-weds posed inside the castle, on the stone steps to the front door, and seated on a park bench. But it was all over in hours. 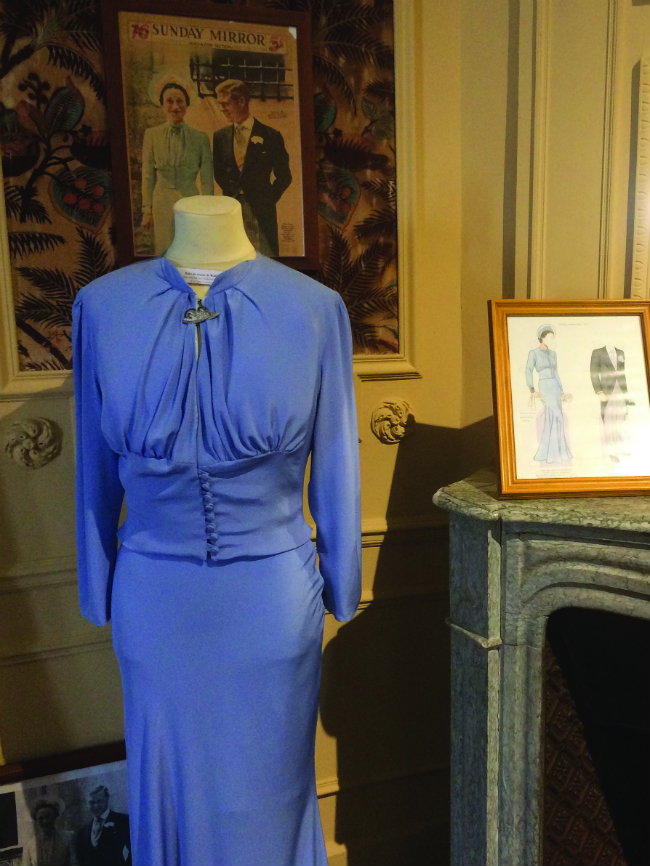 The couple left that evening on honeymoon, never to return to the picturesque castle where they had been joined as man and wife. They continued to live in France and, after the outbreak of war in 1939, the Duke was given a military post in the British Army stationed in France. As the German troops advanced, they headed south to Biarritz, then Spain and Portugal, before travelling by sea to The Bahamas. Here the Duke was installed as Governor, remaining in the post until the war was over.

In 1952, the Windsors were offered the use of a house in Paris by the local authorities, where they lived for the rest of their lives. Edward died from cancer in May 1972 and after a funeral at St George’s Chapel was interred in the Royal Burial Ground at Windsor. And when his beloved Wallis died in April 1986, she was laid to rest beside him.

To the end, Wallis remained grateful for the help given to the couple by the French nation and, in lieu of death duties, left them her collection of Louis XVI furniture, along with porcelain and paintings. Her fortune was bequeathed to the Pasteur Institute for research into public health.

Edward, king for just 326 days, retained his status of His Royal Highness; Wallis, however, had to be content with Duchess of Windsor. But as Duke and Duchess of Windsor, they formed one of the most controversial and colourful couples of the 1930s and Château de Candé brings their love story vividly to life. 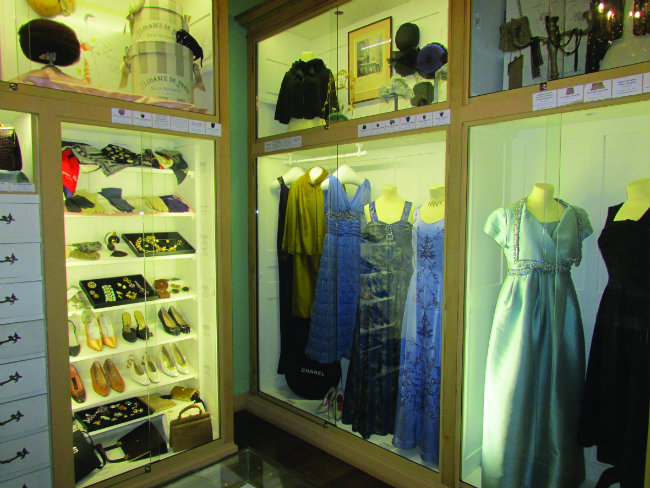 The chateau holds some items from Simpson’s wardrobe

Stay at the Windsors’ holiday home

In exile after World War II, the Duke and Duchess of Windsor settled in Paris, but they spent some of their happiest times at their weekend retreat in the country. Le Moulin de la Tuilerie at Gif-sur-Yvette lies to the south-west of the capital and was the only house they ever owned. The Windsors loved house parties and at Gif they entertained some of the best-known personalities of the ’50s and ’60s including Maria Callas, Marlene Dietrich, Elizabeth Taylor, Richard Burton and British photographer Cecil Beaton. The Duke of Windsor commissioned English designer Russell Page to design the gardens, which Edward tended himself, and the layout remains unchanged to this day.

Fast-forward to the present day and Le Moulin has been tastefully converted into a holiday rental proper ty that sleeps 12 by The Landmark Trust, a unique British charity that restores historic – and often extraordinary – buildings for self-catering guests.

Also for rent at Gif are La Maison des Amis (sleeps 4) and La Célibataire (for 2), both of which were used to accommodate the Windsors’ many guests. Each property has a private terrace and guests can wander the extensive grounds, the parterre merging into ancient woodland where the Windsors buried their beloved pugs.

For more information or to book, visit www.landmarktrust.org.uk 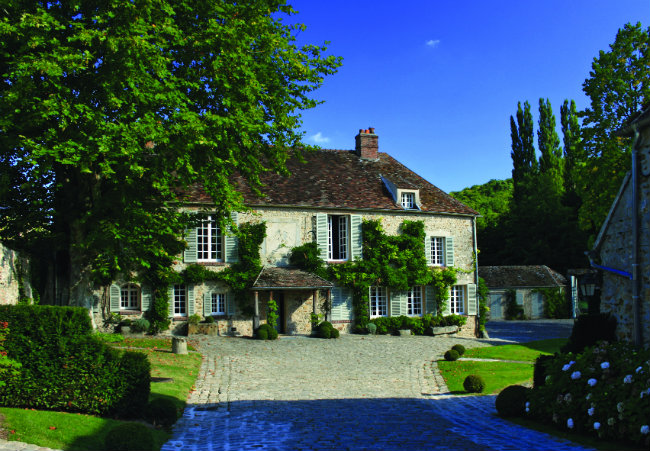