Collonges-la-Rouge: The Most Beautiful Villages of France 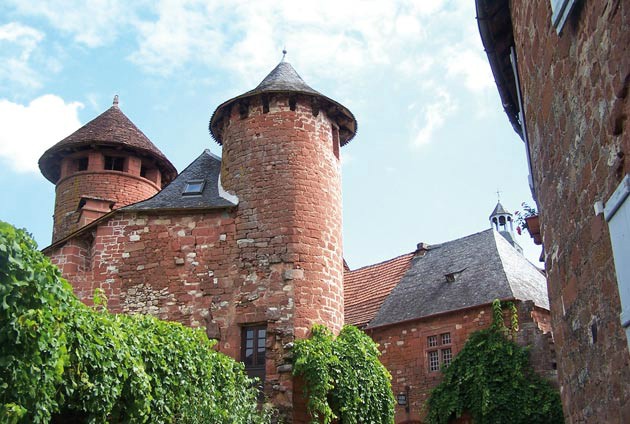 The medieval hamlet of Collonges-la-Rouge is straight out of a fairytale: its turreted houses, built entirely of blazing red sandstone, emerge flamboyantly from the green pastures of the Limousin. Narrow alleyways wind between these ancient edifices, the red stone draped with greenery, clusters of grapes, and in the spring—snaking tendrils of wisteria. Built on a gentle incline in the midst of walnut groves, this village conjures the quintessential image of the French rural pastoral. But there’s even more to it than meets the eye.

It was here in the untouristed Limousin where Charles Ceyrac, the former mayor of Collonges-la-Rouge, devised the concept for the association of Les Plus Beaux Villages de France in 1982. The idea was inspired by a book he read, published by Reader’s Digest, about the 100 most beautiful villages in France. After decades of rural exodus in the 20th century, many French villages were left as hollow shells of their former selves, the populations depleted, buildings in disrepair, and traditional livelihoods in jeopardy. Collonges-la-Rouge, for example, lost 40 percent of its population and its chapel—like other crumbling buildings—suffered a collapsed roof. Across France, similar hamlets were at risk of becoming living museums. Ceyrac sought to unite these oft overlooked villages in an association that would renovate and preserve them, while at the same time rejuvenating the local economies through sustainable tourism.

And so Les Plus Beaux Villages de France was founded in 1982 as an association of 66 rural villages and has since become a heralded trademark by which visitors can discover some of the most beautiful and off-the-beaten-path sites in France. Today, the association numbers 157 villages in 21 different regions and 69 departments. It’s become a real brand. Beauty is, of course, in the eye of the beholder, but the association seeks to minimise this inherent subjectivity with its rigid selection criteria.

Bien sûr, there is the danger that tourism can erode the traditional way of life in a village like Collonges-la-Rouge, and thus the association walks a fine line with its dual focus of preservation and promotion.

Why the red stone? “It was easy to get from the nearby quarry,” the mayor’s office explains. But the residents of Collonges-la-Rouge have always had an eye for aesthetics. Historically, the powerful viscounts of nearby Turenne controlled much of the surrounding region, including Collonges-la-Rouge, for a thousand years starting in 1000. “One cannot understand one village without the other,” the mayor’s office says of the complementary relationship between the two. In the 16th century, vassals of Turenne were given land grants in Collonges-la-Rouge, its microclimate and terrain a pleasant enticement. These vassals then competed to build the biggest and most beautiful houses, replete with elaborate red towers. Today these castles stand side-by-side next to the graceful 15th century Chapelle des Pénitents and Romanesque church (L’église Saint-Pierre), an important stop for thousands of medieval pilgrims on their route to Santiago de Compostela.

Visitors are enchanted by the church because of the story behind its unique construction. Built from the 11th to the 15th centuries on the foundations of the 8th century abbey, the church is remarkable in that it has two naves, where local Protestants and Catholics conducted their services simultaneously in the 16th century. Equally as beguiling are the myths of Collonges-la-Rouge, like La légende de la Chaise du Diable.  Outside the village, there is a large, strangely-shaped rock, dubbed the “devil’s chair” by residents. As legend has it, all the village cats disappear on the night of carnival, slinking away into the darkness, for an infernal rendez-vous with the devil. At the devil’s chair, the cats morph into howling bat-like creatures, until dawn’s first light when they disperse back into the village.

As to be expected in a place dependent on tourism for its economic survival, there is a smattering of shops selling medieval kitsch and postcards.  After all, during the busy summer months, 6,000-7,000 tourists visit in a single day, and a year averages 700,000 visitors. But the village has made it a priority to attract quality artisans. “We don’t want shopkeepers to sell products from Taiwan,” says the mayor’s office. “Artisans thrive here.” Leather goods, hand-made knives, organic produits du terroir, locally made apéritifs and liqueurs… These unique boutiques have prospered in Collonges-la-Rouge, tucked into the ancient houses.

Artists and craftsmen continue to flock to this picturesque setting, and many are long-time residents. The artisan coutelier moved to Collonges-la-Rouge in 1999. “There’s a real interest in the traditional, handmade knives of the Corrèze,” explains the family-owned business. “The Chiracs are customers, and in 1998 they presented the Clintons with a collongeois knife.”

Year-round cultural events also breathe life into the age-old village. In the summer months, the festival des Théâtrales de Collonges-la-Rouge brings open-air theatre performances to the Place du Lavoir every Tuesday evening. Today Collonges-la-Rouge continues to embark upon beautification projects, like the recent repaving of the Place de la Fontaine, and modernisation of infrastructure. At the heart of these projects is the desire to respect and preserve the past.

It was a coup de foudre (“love at first sight”) for French actor, Maurice Biraud, whose house is prominently positioned in the hamlet. “Biraud fell in love with his future wife, who was from Collonges-la-Rouge, and at the same time he fell in love with the village,” says local resident, Marie-Line Gauniche. “The actor invited all his Parisian friends for weekend jaunts to Collonges-la-Rouge.”

The village is still a favourite of Parisians who come for getaways in the countryside. It’s really no wonder that the tourism board receives weekly requests about property for sale. In fact, the population has almost doubled since 1982. There’s something inexplicably alluring about the red stone village.

Where to Stay, Where to Eat

There is another lodging possibility in the nearby town of Meyssac, composed of the same red sandstone, though not as picturesque as Collonges-la-Rouge. Le Relais du Quercy (Tel: 05 55 25 40 31) is an excellent choice, with restaurant, pool, and 12 guest rooms (ranging from 55-72 euros).

This is foie gras country and thus most of the village’s restaurants serve similar (and outstanding) fixed menus highlighting foie gras, local walnuts, truffles, and duck. For a full listing of eateries and bed & breakfast options, check the mayor’s website.