Cradle of the Renaissance: A Celebration in the Loire Valley 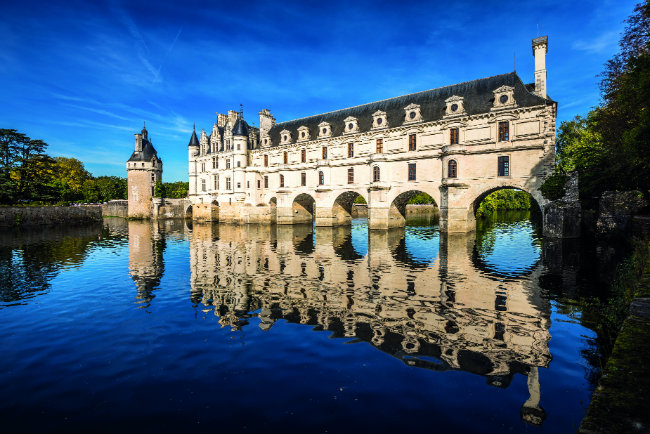 As the Loire Valley prepares to celebrate the 500th anniversary of the Renaissance, with the Viva Leonardo da Vinci! festival, Gillian Thornton immerses herself in the region’s iconic châteaux, where half a millennium ago France experienced a rebirth like no other

It’s not every day a girl gets to swish round the courtyard of a king’s château in a period frock. So I’m making the most of being glammed up for an evening of Renaissance dancing at the Château Royal d’Amboise. Below the ramparts the setting sun is turning the tranquil water of the Loire into liquid gold; above me, swallows trace arcs across the darkening sky in search of supper. Special moment or what? 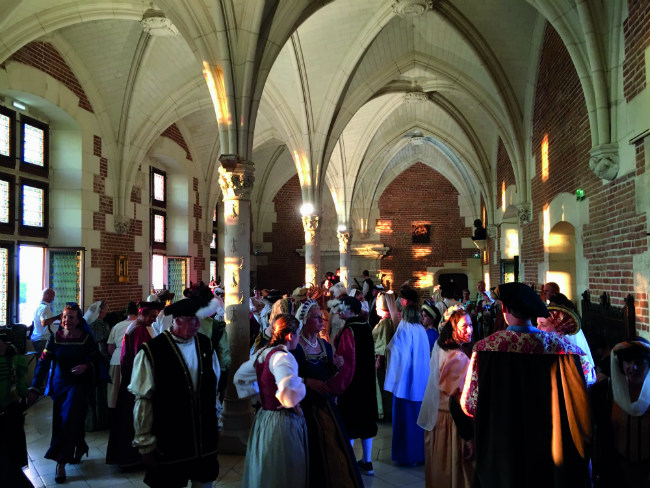 Every tourist board loves an anniversary – it’s the perfect way to attract visitors to your area through special events and exhibitions. And few regions have a portfolio of period properties to match that of the Loire Valley. So you can’t blame them for celebrating the 500th anniversary of the French Renaissance in 2019, even if the date in question is ever so slightly arbitrary.

The movers, shakers and monarchs of the French court had largely decamped to the Loire Valley from Paris in the 15th century, building new châteaux and embellishing old ones in the fashionable Renaissance style. Inspired by the Italian Renaissance, this cultural movement was a ‘rebirth’ that embraced art, philosophy and ideas based on antiquity. 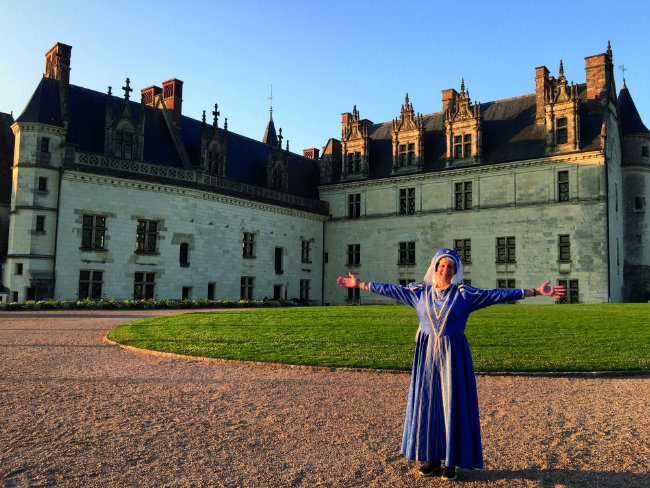 Gillian Thornton is all dressed up for the Renaissance Ball

Charles VIII and his cousin Louis XII first discovered the new way of thinking while on military campaigns in Italy and brought craftsmen and gardeners home with them to France. But it was under Louis’s heir, his cousin François of Angoulême, that the French Renaissance really got into gear. Friend and rival to England’s Henry VIII, François I was the ultimate Renaissance man: fit, flamboyant – and full of himself.

The Renaissance was to carry on under François’s son, Henri II, and his wife Catherine de’ Medici, but as the monarchy gradually began to spend more time in Paris again, so the flurry of building in the Loire Valley ground slowly to a halt and new kings inevitably championed new styles. And yet the Renaissance has left a mark here that is still as strong as it ever was. 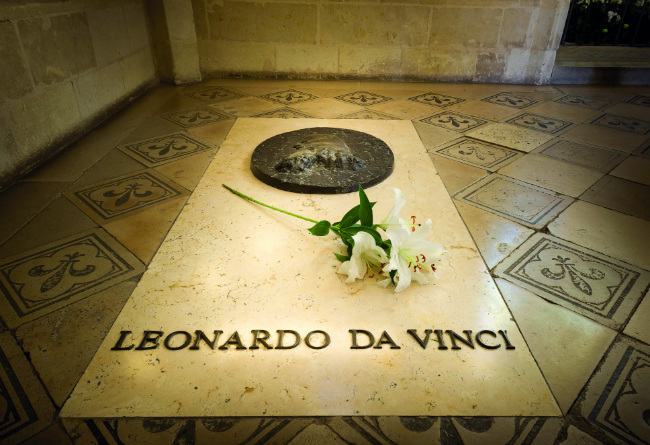 Today, new ideas and technology are providing fresh ways to showcase the many parks, gardens and heritage sites for new generations of visitors. And artistic projects such as the Centre de création contemporaine Olivier Debré (CCCOD) in Tours are challenging traditional perspectives with multimedia works by innovative artists and designers.

So why 2019? It’s all down to three significant events: the laying of the first stone for François’s big building project, the Château de Chambord; the death of Leonardo da Vinci at the Clos Lucé in Amboise; and the birth of Catherine de’ Medici in Florence. 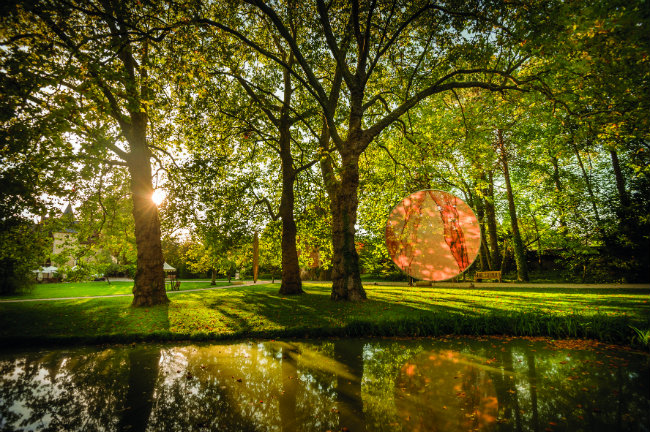 The elderly Leonardo lived his final years in Amboise at the invitation of the young François I, crossing the Alps from Italy with two loyal servants and three favourite pictures, including the Mona Lisa. And Catherine was to become one of the major female characters of the French Renaissance, marrying François I’s son, Henri II.

And wherever you hear Catherine’s name in the Loire Valley, you’ll usually find her glamorous rival Diane de Poitiers close by, the favourite mistress of Henri II. Remember these names and you’ll soon find them coming vividly to life through their royal residences and colourful exploits. History here is anything but dull. 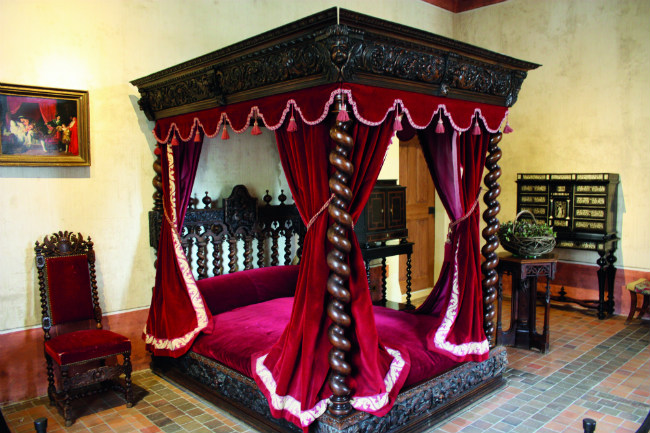 If you’ve children in tow, ask about special activities and interactive guides for younger visitors. There are plenty of grisly bits for them to relish too. Charles VIII died aged just 27 after hitting his head on a lintel; Henri II died after being stabbed through the eye with a lance during a jousting tournament in 1559. Renaissance life was often precarious.

Today, around 40 châteaux, large and small, are open to the public. Lovely though they are with their whimsical turrets, limpid moats and tranquil parks, it’s easy to end up with château fatigue, so do pace yourself. Perhaps combine a château visit with wine tastings around the vineyards, cycling on the Loire à Vélo trail, or taking a guided kayak excursion to discover the natural world from water level. 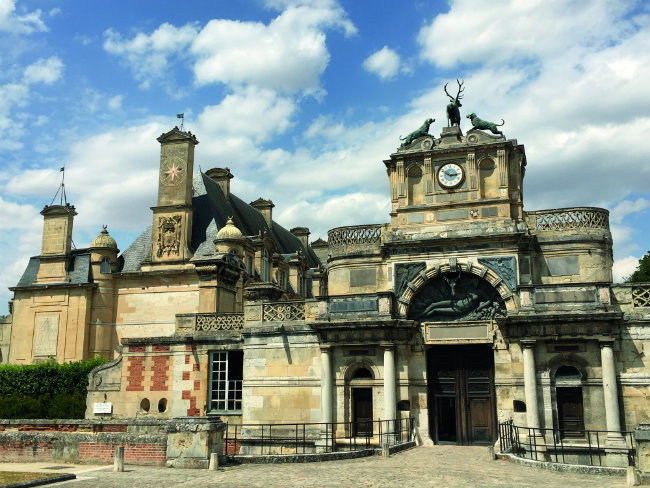 You’ll need wheels to explore the area fully, and if you’d rather let someone else do the driving, do as I did and let Mario Tirelli of Loire Valley Travel be your chauffeur and guide. We began small at Anet, a privately-owned château on the border with Normandy north of the Loire Valley. 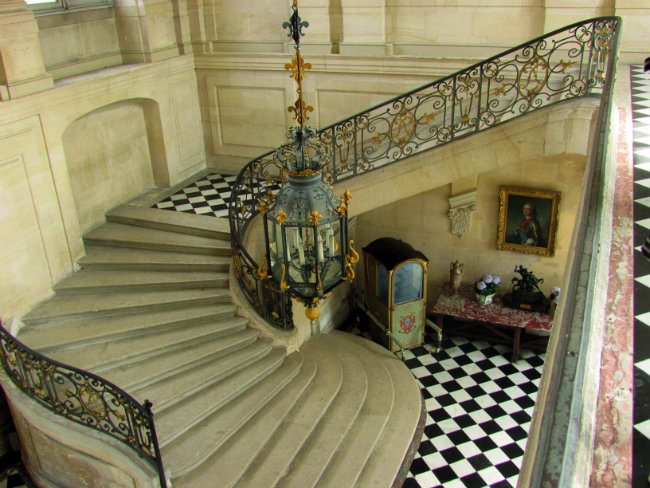 Completed in 1552, the Château d’Anet was built by Henri II for Diane de Poitiers. Twenty years older than Henri, Diane was his former governess and the widow of Louis de Brézé, Sénéchal of Normandy, who was 40 years her senior. Society soap operas don’t get much better than this: the besotted young king with his older mistress, and his frustrated queen resigned to look on. Diane’s crescent moon emblem features throughout this homely property, as do the intertwined initials D and H, even though Henri always insisted that their friendship was platonic. 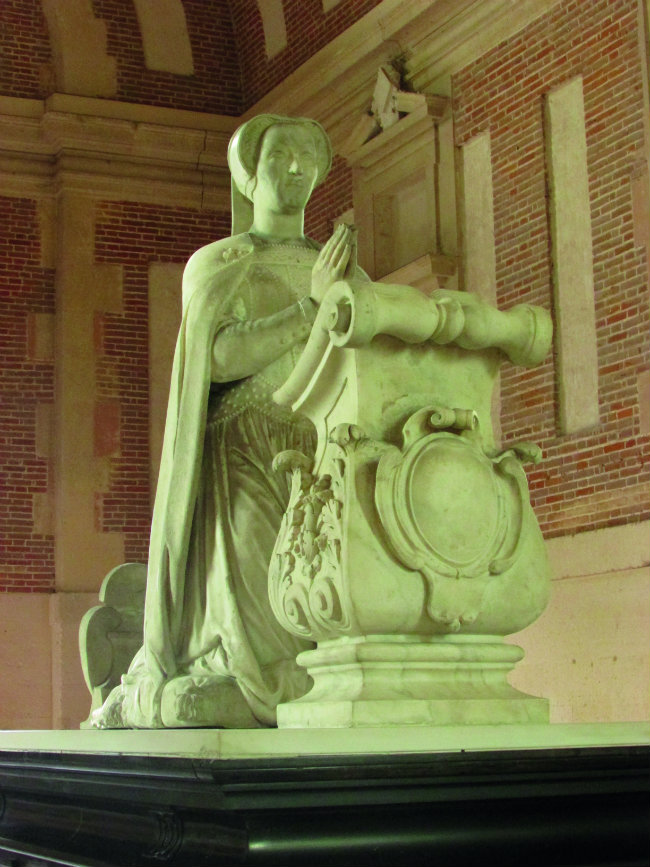 South of Anet, Chartres is the northern gateway to the Loire Valley. Join a guided walk to discover not only 16th-century houses but also medieval properties given a fashionable Renaissance makeover with decorative motifs and antique pillars. Visit between April and October to catch Chartres en Lumières, a self-guided trail of light shows projected onto two dozen buildings around the town. Don’t miss the cartoon builders who ‘unroll’ the western façade of the cathedral, adding statues as they go. Spellbinding. 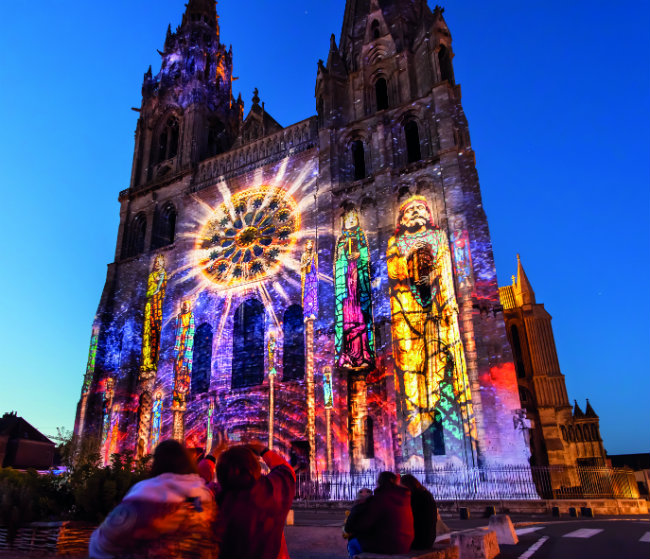 And for a really spine-tingling experience, book a place on the candlelit tour of the cathedral, following in the footsteps of the pilgrims. Walking up from the underground crypt into that huge space by the light of just a few candles is an unforgettable experience, whatever your religious beliefs, or lack of them. 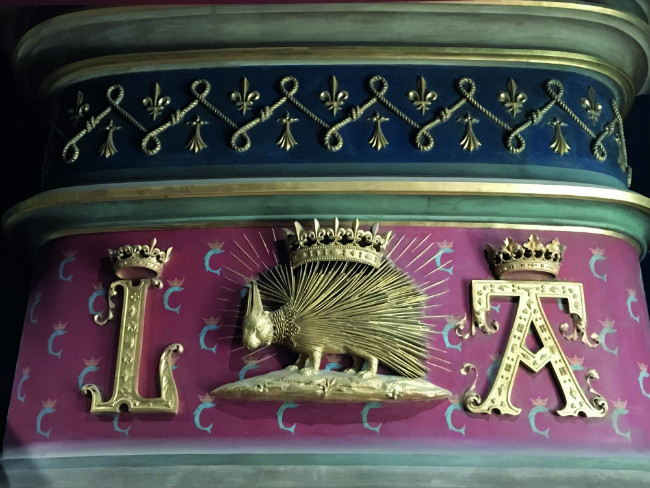 These initials are for Louis XII and Anne de Bretagne, the porcupine is Louis’ symbol. Photo: Gillian Thornton

From Chartres, a couple of hours by car bring you to the heart of the Valley of Châteaux – shining beacon of Renaissance France. Expect an overload of symbols – porcupines for Louis XII and salamanders for François I – not to mention more intertwined initials. Not just in their own castles either, but also on properties owned by fawning subjects. 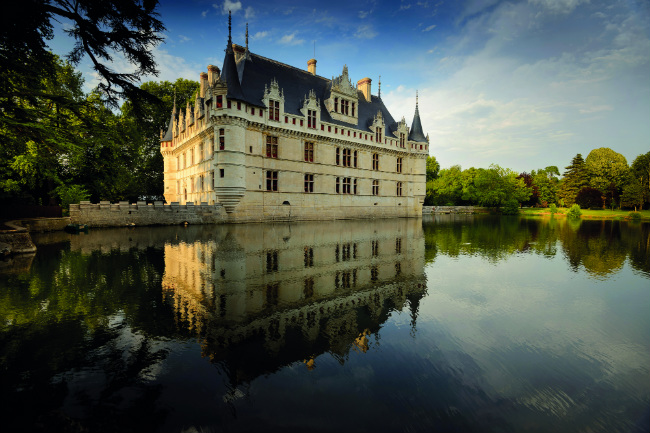 The modest but beautiful Château d’Azay-le-Rideau near Tours, for instance, was built by Gilles Berthelot, finance minister to François I. Above the entrance to this magical, moated property of sparkling white tufa are the initials F and C, for François and his wife Claude. You’ll also spot salamanders for the king and ermine for the queen. It’s always best to respect the boss, even if – as here – he never comes to call! 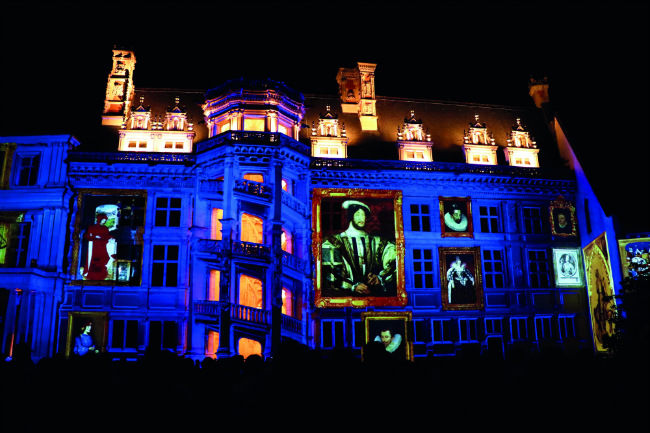 If you’re a Loire Valley virgin, the Château Royal de Blois will put all the major players into context. Its four wings around a central courtyard were added by different monarchs, and so provide a good overview of both people and architecture across the decades. A Renaissance-style garden is being laid out on the castle terrace above the Loire for 2019 and a major summer exhibition will explore childhood in the 16th century with treasures lent from collections around France. 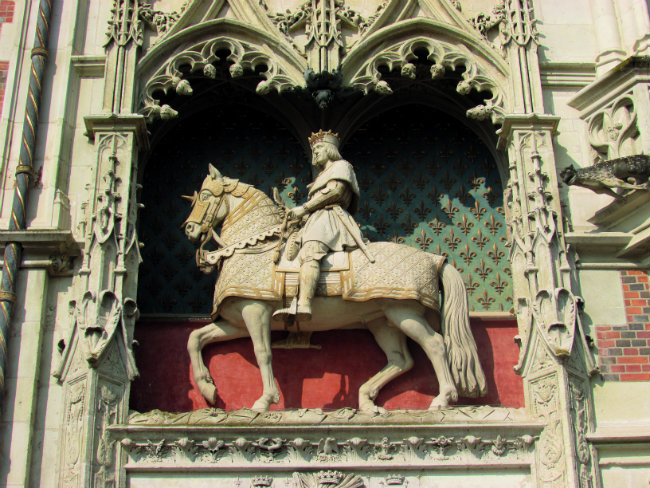 François was a man of many homes, but most notably the Château Royal d’Amboise, west of Blois. Charles VIII gave the medieval château a bold new look in the 1490s, entrusting the interior to Italian craftsmen and creating an Italian garden – the perfect setting for my evening of Renaissance dancing!

The royal rooftop was clearly visible from the bedroom window of Leonardo da Vinci, just 400 metres away, at the manor house of Clos Lucé. François and his sister Marguerite spent their summers here as children, and in 1516 the young king appointed Leonardo as his ‘First painter, architect and engineer’, installing him at the house and paying him 700 gold écus a year. They would talk together for many hours, and Leonardo also spent time masterminding grand royal parties, drawing canal systems and planning engineering projects for the king. When Leonardo died three years later in 1519, aged 67, he was buried within the castle precincts.

But topping the bling scale is the château that François I commissioned purely for hunting and entertainment: the Château de Chambord. Although Leonardo died in the year it was begun, it’s thought that the double-helix staircase at the centre of the vast turreted pile was built from his designs. Chambord was never a permanent residence, François I arriving periodically with everything from tapestries and rush matting to beds and wardrobes. But as a pleasure palace it had no equal. 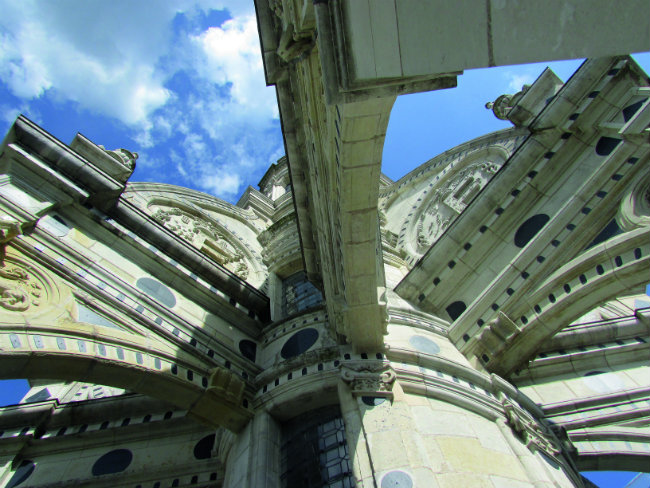 Chambord is hugely popular, but Chenonceau is the most visited of the Loire Valley châteaux, though it is comparatively modest in size. Henri II gave it to Diane de Poitiers, who created some of the most spectacular gardens of the age and also commissioned a single-storey gallery across the Cher. On Henri’s death, his widow Catherine insisted that Diane give her Chenonceau in exchange for Chaumont. Catherine then made Chenonceau’s gardens even more magnificent, added a second storey on the gallery, and – as Regent to their teenage son, Francis II – governed France from the Green Study. 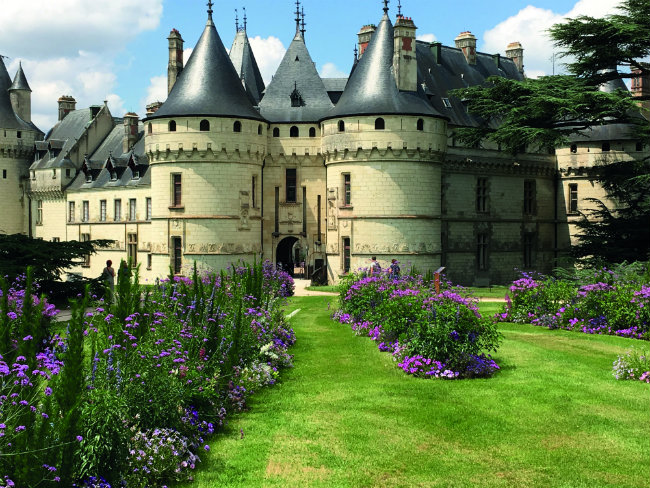 Not that many of us would consider Diane was short-changed with Chaumont. Today, this turreted château above the Loire is a leading Centre of Art and Nature, famous for its annual International Garden Festival, which showcases contemporary themed plots. Visit Catherine de’ Medici’s bedroom and other period rooms, but expect contemporary art too – both indoor and out – that’s guaranteed to provoke discussion. Centuries may have passed but the Renaissance is alive and thriving in the Loire Valley! 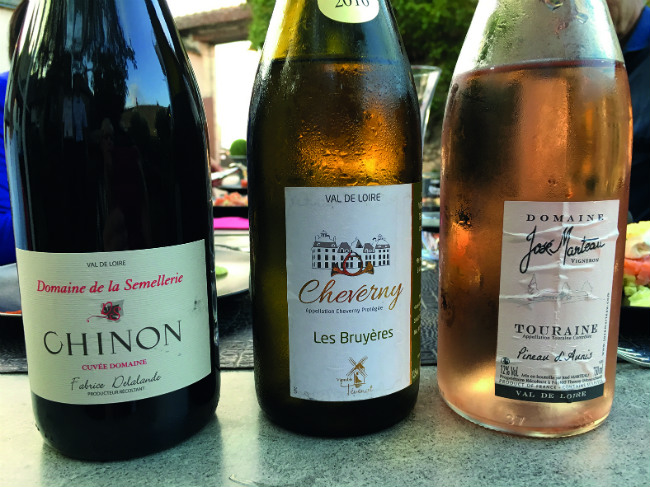 SIDEBAR: A TASTE OF THE LOIRE VALLEY

WINE: The Loire Valley is the third-biggest wine-producing region in France. Choose from more than 30 appellations in red, white and rosé, both sparkling and still, and don’t miss raspberry-based Chambord liqueur, which originated in the 17th century. www.vinsvaldeloire.fr www.vins-centre-loire.com

RILLETTES DE TOURS: A savoury speciality of the Touraine region, (protected with an IGP label of origin), rillettes de Tours date back to the 15th century and are mentioned by Rabelais, Balzac and Proust in their works. Shredded slivers of pork are slow-cooked for many hours and, traditionally, flavoured with Vouvray, to be served as a starter or a light lunch with salad and crusty bread. 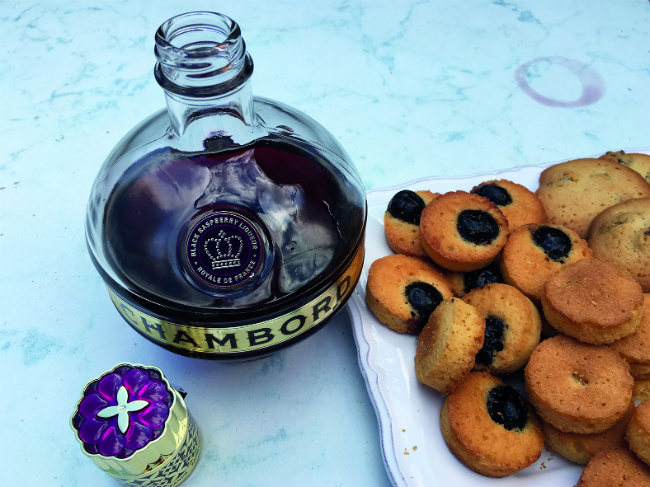 GOAT’S CHEESE: Local cheeses include AOP Sainte-Maure-de-Touraine, shaped like a small log and rolled in wood ash with a piece of rye straw running through it. Made from full-fat unpasteurised goat’s milk, it is matured in a cellar for at least ten days. Also from goat’s milk is Selles-sur-Cher, which is delicate with a light, nutty taste.

MUSHROOMS: Half the French national production of button mushrooms is grown in underground galleries in Saumur, some in troglodyte sites dating back to the Renaissance. In Bourré, near Chenonceau, the Cave champignonnière des Roches also grows 40 per cent of the world’s blue foot mushrooms. 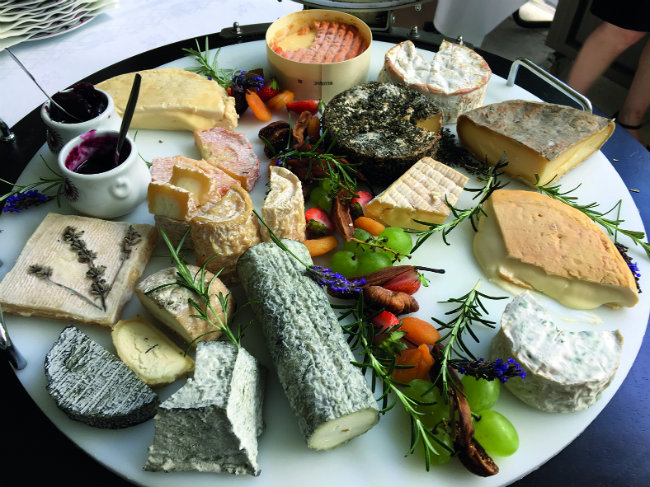 TOMATOES: The French National Tomato Collection is grown in the park of Château de la Bourdaisière at Montlouis-sur-Loire (www.labourdaisiere.com). Stroll through a kitchen garden containing more than 700 varieties and maybe try some tomato-based dishes in the château’s Bar à Tomates. 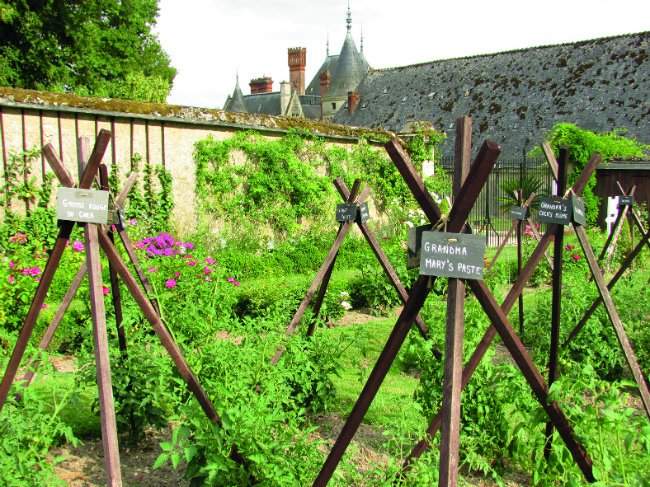 Previous Article Where to Stay in France: A Selection of Interesting Chateaux-Hotels
Next Article City Focus: Marseille, France’s Second City