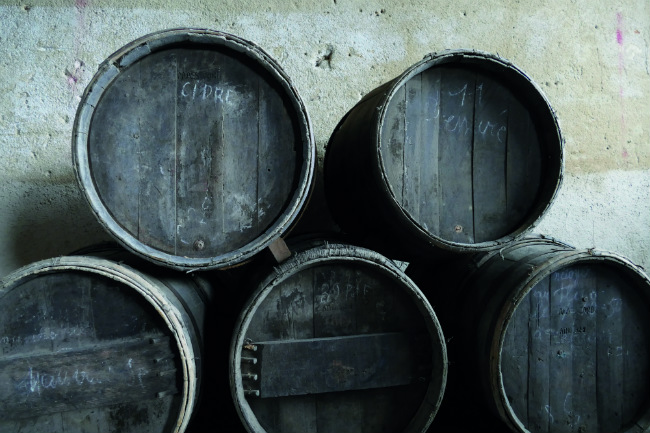 Being a fan of little-known facts, I was fascinated to learn that during World War II many apple orchards were destroyed by intensive bombardments along the stretch of coast where tourists now flock to visit the D-Day beaches. In order to preserve their savoir-faire, local farmers buried their precious barrels of calvados, digging them up after the war to offer liberating Allied troops their first taste of Normandy’s punch-packing apple brandy. It was this little anecdote about the iconic spirit that decided me to drive the 40km Route du Cidre, which wends its way through historic towns and pretty hamlets in Lower Normandy’s Pays d’Auge. 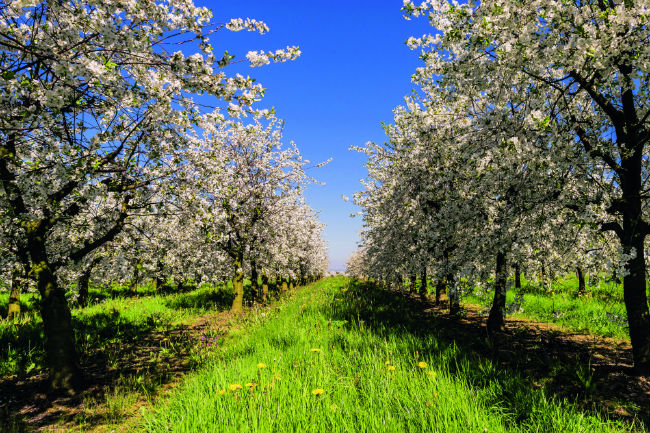 Normandy is a region famed for its apple orchards. In fact, half of all France’s apples are produced in this picturesque region whose fertile soils and temperate climate are perfect foil for cider apples chosen for their flavour and high juice yield.

To get into the spirit of cider country I had booked into a luxury tree house at Le Domaine de Canon where, in season, visitors can lend a hand harvesting the apples.

For an overview of this cider-producing region you can’t beat perching 22 metres up in the trees in one of the Domaine’s beautifully constructed cabanes, and I sat out on my high-flung terrace bathed in the late evening glow mesmerised by the views of the fields that were home to the orchards and farms I planned to visit over the following two days. 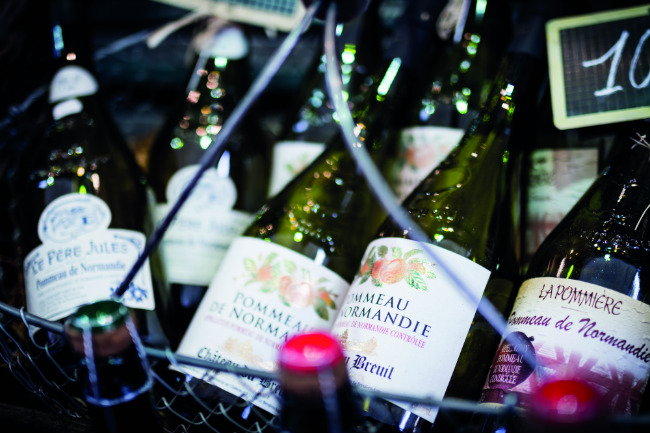 Over breakfast next morning (rice pudding – teurgoule – and crêpes normandes, pancakes stuffed with apple purée and slathered with fresh cream) I learnt that the local apples come in four varieties: bitter, sweet bitter, sweet and acidic; and have beguiling names like ‘gentle bishop’ and ‘skin of the dog’.

It was a warm day in spring, with velvety bees buzzing around the honeysweet blossom of apple trees in full bloom, when I headed out along lush country lanes fringed with yellow cowslip and pink-tinged bladder campion to Cambremer, the village that gave its name to a family of characters in Marcel Proust’s iconic novel À la recherche du temps perdu. 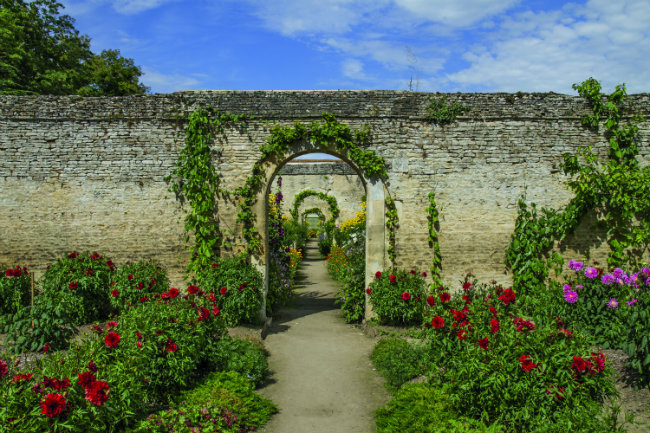 After visiting the church with its elegant 12th-century spire, I took a lazy stroll along the glorious avenue des Tilleuls to the Calvados Pierre Huet distillery, owned by the Huet family since 1865, where, during a guided visit of the family’s picturesque, half-timbered manor house, I learnt more about the history of Normandy’s famous apple beverages.

According to legend, Basque sailors first brought apple wine to Normandy in the 6th century, but the region’s apple cider was made fashionable by French royals, including the ‘Sun King’ Louis XIV, who is said to have liked it almost as much as champagne. Then, in the mid-16th century, Gilles de Gouberville, the son of a local lord, distilled cider to create Normandy’s first apple brandy. Gouberville’s alcoholic beverage only gained its definitive name after the French Revolution, however, when this region at the heart of the Pays d’Auge was renamed Calvados. 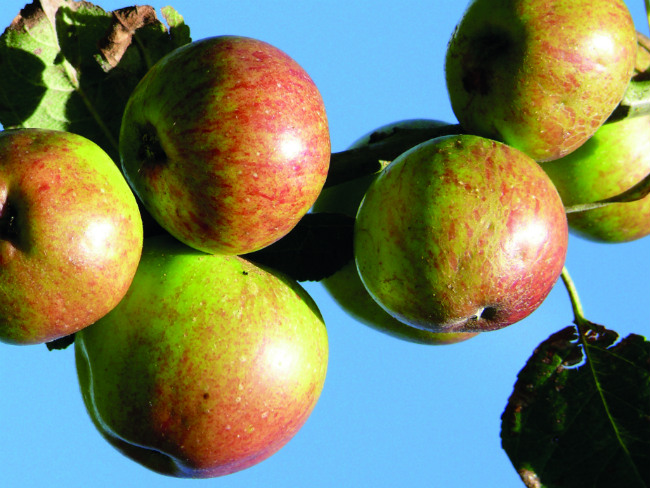 During the guided tour I marvelled at the gleaming double-distillation copper alembics where calvados is made by passing pressed, filtered cider through the still, and then wandered in the cool, low-roofed cider cellars packed to the rafters with the sweet-scented oak barrels where calvados is aged for two to 25 years. Back in the family’s small shop I sampled crisp and refreshing ciders and a range of different types of calvados, including the dark and earthy 30-year-old Cordon Or, which lingers on the tongue long after the last sip, then stumbled out to visit Les Jardins du Pays d’Auge. This vast green space with its shaded alleys, vivid flowers and scattering of half-timbered houses is one of the most beautiful gardens in Calvados and I spent a captivating hour here before heading out for my next stop on the Cider Route.

At the Calvados Dupont distillery, just outside of the pretty village of Victot-Pontfol, the Dupont family have been making apple-based beverages for four generations. One of Normandy’s most celebrated cider and calvados manufacturers, they belong to Esprit Calvados, an enterprising group of producers who want to rejuvenate the image of their age-old products.

The Dupont distillery produces cider, calvados and pommeau – the sweet local aperitif made from a combination of calvados and apple juice that earned its own AOC in 1991 – but they are also experimenting with new drinks, including a unique triple-fermented cider made with bitter apples and (my favourite) a rich, velvety liqueur with a hint of caramel called Calvados Cream. The Dupont estate offers free distillery tours all year round, but it’s really worth joining one of their hour-long guided tours if you want to learn more about their production methods. 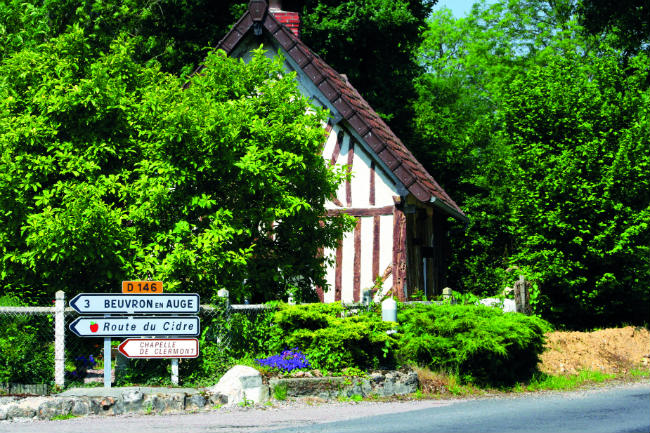 Back in my tree-top haven that evening I enjoyed dinner delivered directly to my cabane in a picnic hamper packed with petits fours, locally made pâté and other tasty snacks (including a bottle of the Domaine’s own cider), which I hauled up, hand over hand, on a long rope.

After a peaceful night lulled by a gentle wind around my tree house, I made my way through narrow country lanes to the charming village of Beuvron-en-Auge, stopping off at a few farms en route to buy Pays d’Auge cider. Sold from cool barns or farm cellars, you can choose from Doux, which is a mild, semi-sweet cider with around 1.5 per cent alcohol, or Brut, which is dry with around 4.5 per cent alcohol. “Both ciders are delicious with fluffy pancakes or nutty flavoured buckwheat galettes stuffed with smoked salmon, andouillette sausages and other fillings,” one farmer’s wife assured me.

Beuvron-en-Auge is a former stronghold of the ancient Harcourt family of Normandy, who are descended from the Viking Bernard the Dane, and whose motto is Le bon temps viendra (good times will come). Beuvron is also classed as one of France’s Plus Beaux Villages and it’s easy to see why. Radiating out from a central square surrounding the richly-carved, 16th-century Vieux Manoir house, the village’s streets are decked with flowers and lined with shops selling antiques, plants and craftwork. There is also a central market with shops, galleries and a restaurant, and a small park surrounded by cafés where you can sit and watch the world go by while you sip your café-calva. 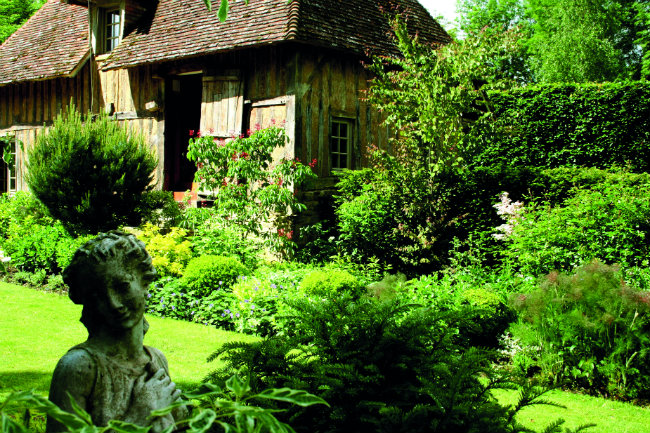 At the Pavé d’Auge, a cosy little restaurant in the centre of the square that has been owned by the same family for more than three decades, I ordered foie gras served in a cider marinade and a rich tarte tatin apple pie glazed with a calvados cream for a delectable dessert, before setting out to hunt for antiques.

A few hours later, loaded down with 19th-century glass cider decanters and a wonderful oil painting of an 18th-century Normandy farmhouse with turreted spires peeking out of a blossoming frenzy of apple trees, I drove to Beaufour-Druval – whose inhabitants are called, wonderfully, Beaufourquais(es)- Druvalais(es). The village is also home to Le Page cider farm, where I sampled a small tumbler of richly satisfying pear cider before driving to La Roque-Baignard, the village renowned for cider and stud farms and for once having had the novelist André Gide as its mayor.

In the Au P’tit Normand restaurant back in Cambremer later that afternoon I ordered a glass of Pommeau de Normandie Coquerel. It reminded me of Flox from Armagnac and went down well with the local foie gras, so I bought a few bottles to take back home.

Although I was sad that the weekend had ended, I knew that I would only need a sip of that syrupy liqueur to conjure up all the apple-scented memories of my trip through cider country.

* “The commune is so small that it doesn’t have what you could really call a town hall. Used instead was the common room of one of my farms, by the roadside, very close to the little church.”
** “Ah! How well I recognised the house! Its blue roof, its walls of brick and stone, its moats, the reflections in the dormant waters.” 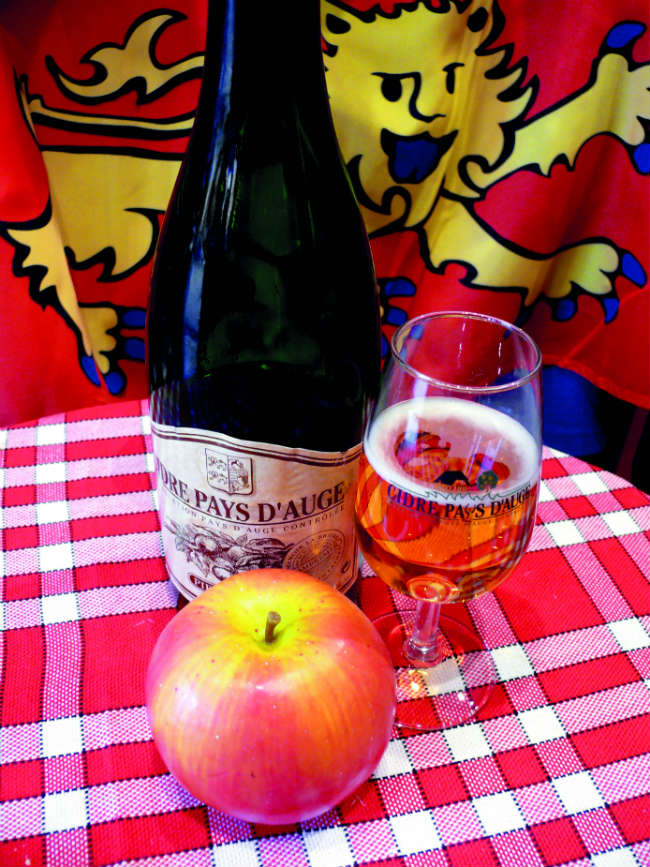