High Spirits in the Charente Valley 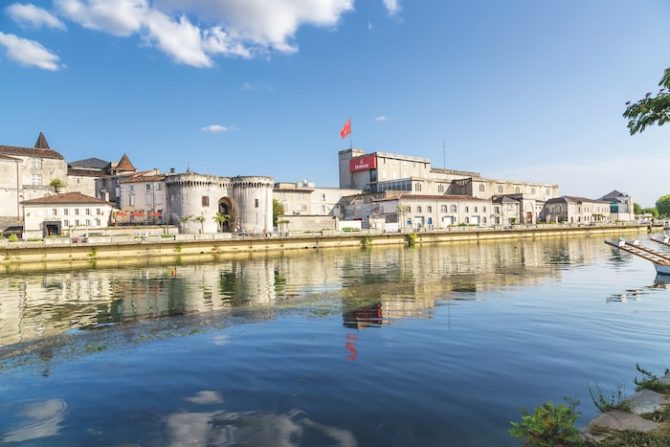 Gillian Thornton takes to the majestic Charente river to explore an area famous for its Cognac, comic books and naval links – through four historic towns on its banks…

Holiday memories are strange creatures. So often we remember the small places, the surprise views, or the unusual encounters in much sharper focus than the big attractions. That’s how Cognac is for me. I was a teenager when my parents first introduced me to Cognac – not the drink, so much as the town that produces it. And while the finer details of that first family holiday to France now escape me, I still clearly remember the impact of discovering for the first time a small town where everything revolved around one thing. I was too young to enjoy a tasting – that came later – but I’ve never forgotten my first distillery tour, trying to translate my father’s technical questions with my schoolgirl French. I’d never been anywhere like it.

Fast forward a few decades and Cognac is a town I’m always happy to return to. Now a firm fixture on the international tourist trail, it offers far more to visitors than those basic distillery tours of my youth, even lending its name to a wider tourist region: Atlantic Coast and Cognac Country. Once the heart of the Poitou-Charentes region, this glorious mix of coast and countryside is now part of Nouvelle-Aquitaine.

And cutting through the verdant landscape of Cognac Country is one of France’s prettiest liquid thoroughfares, the Charente, dubbed ‘the loveliest stream in the kingdom’ by 16th-century monarch Henri IV. Rising near Rochechouart in the département of Haute-Vienne, the Charente winds its way through the former provinces of Angoumois and Saintonge for 381km before flowing into the Atlantic west of Rochefort.

There are many estuaries along the Atlantic coast, but the Charente offered something special in an age where supremacy at sea was hotly contested. Tucked into the coastline south of La Rochelle, the river mouth is conveniently hidden from the ocean by the islands of Ré and Oléron. And if there’s anything that appealed to war-happy King Louis XIV, it was a hidden estuary. 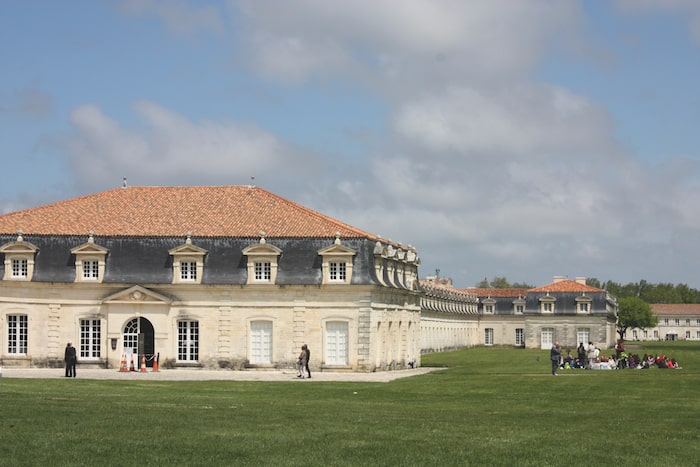 I started my Charente river journey at Rochefort, 20km from the sea. When the monarch’s Finance Minister and general Mr Fixit, Jean-Baptiste Colbert, discovered this sleepy fishing village nestled in a bend on the river, he immediately saw its potential, setting up a royal arsenal where more than 550 ships were to be built over the following three centuries.

You won’t see a more elegant factory than the Corderie Royale (royal rope factory), nicknamed the Versailles of the Sea’, nor walk the decks of a more beautiful ship than L’Hermione – a faithful replica of the 18th-century frigate that took Lafayette to America during the War of Independence. For a full overview of Rochefort’s relationship with the sea, visit the Musée National de la Marine. 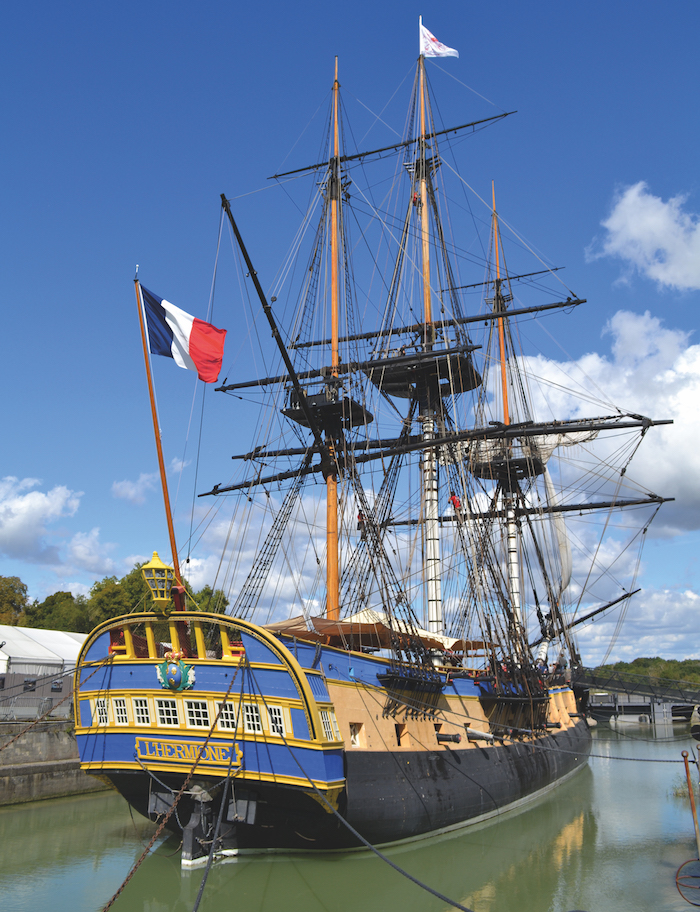 A replica of the frigate l’Hermione, on which Lafayette sailed to America during the War of Independence (1775-83). Photo © Shutterstock

The elegant houses and broad streets are packed with the history of navigators, naturalists and explorers – none more colourful than naval officer, traveller, and writer Julien Viaud (alias Pierre Loti). From the street, his former home looks nothing out of the ordinary, but inside, each room is decorated in over-the-top-themed styles from medieval to oriental. The house is currently closed for renovation, but you can experience a 3D visit from the comfort of an armchair at the Musée Hèbre. Prepare to be amazed!

And if you’re a pub quiz fan, remember this. Among the many new species brought back to Rochefort on expedition ships was a colourful flower that was named by naturalists in honour of the town Superintendent, Monsieur Begon. Drop in at the Begonia Conservatory to see more than 1,500 botanical or hybrid varieties of this vibrant plant. 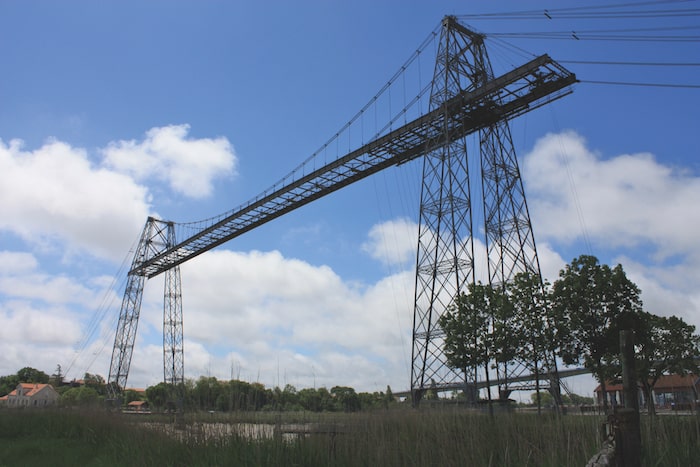 In 2013, the Charente estuary and royal arsenal were classified as a Grand Site de France, a label created by the Ministry of Ecology to reward places that are ecologically sound and support durable energy. Don’t miss the transporter bridge, a unique example of environmentally friendly transport. Bikes and pedestrians are transported across the river on a movable gondola beneath a fixed bridge, which allows boats to pass when required. Opened in 1900 to replace a ferry, it will reopen in 2020 after renovation. Discover the full story at La Maison du Transbordeur, south of Rochefort. 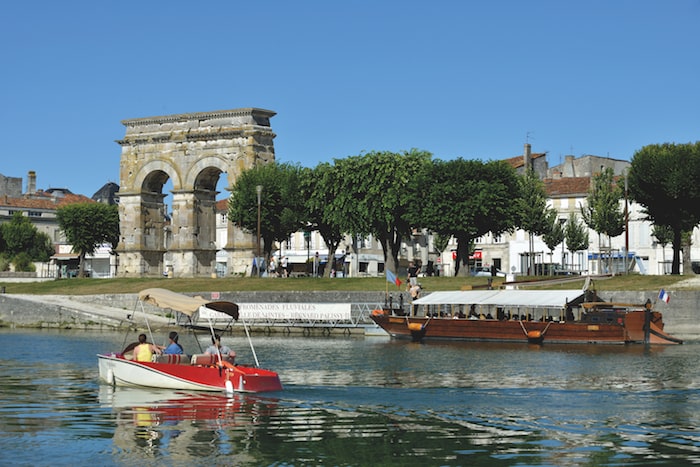 L’Arc de Germanicus at Saintes was once the entrance to a road bridge that spanned the Charente. Photo © P. Baudry

Follow the river inland and after 45km of pretty Charente countryside, you come to a town that was strategically important long before Rochefort. The Romans established Mediolanum Santonum between Lyon and the Atlantic in the 1st century AD, and 2,000 years on, Saintes retains some outstanding Roman remains, as well as buildings from the Middle Ages and prestigious Renaissance town houses of gleaming white limestone.

Stand in the centre of the Roman amphitheatre and you can easily imagine 15,000 people – the entire population of the town – cheering on their favourite gladiator. Stop for a photo moment in front of L’Arc de Germanicus, once the entrance to a road bridge across the Charente, but moved to its present site in the 19th century. Head underground to see the crypt of Saint-Eutrope Priory, hewn from solid rock and a stopping place for pilgrims on their way to Santiago de Compostela. 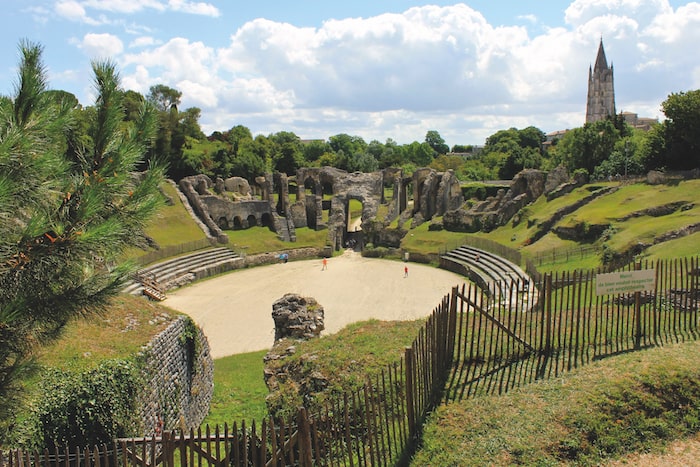 The town also boasts a Roman amphitheatre that could at one time hold the town’s entire population. Photo © Shutterstock

Another 30km of tranquil river valley brings you to Cognac. Wine has been produced in the area since the 15th century, but it wasn’t until the 17th century that double distillation was invented and, with it, the amber nectar that took its name from its town of origin. Today, the Cognac vineyard covers 75,000 hectares – the largest single one in Europe for white grapes, most of them used to produce Cognac. Wine tourism is big business here, the major houses in Cognac and nearby Jarnac all offering guided cellar visits.

It’s no wonder the aroma of my teenage tour stuck with me across the years. As Cognac ages in oak barrels, so the alcohol content of the eau de vie gradually diminishes as the product refines. Each year, the equivalent of over 20 million bottles evaporates into the atmosphere, poetically known as the ‘angels’ share’. 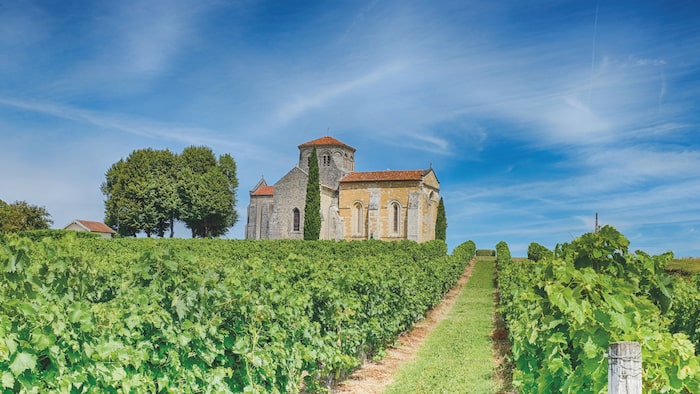 An old chapel in the vineyards. Photo © Shutterstock

Apart from the obvious attraction of the big-name Cognac houses, the town is home to the Musée des Arts du Cognac, which showcases the historic skills of the various trades involved in the industry. Well worth a visit.

Last stop of the four on my Charente valley route is Angoulême, which prospered in the 17th century from the manufacture of paper, when mills stood at regular intervals along the river. Today the ‘county town’ of the Charente département is famous across the world for its BD festival, which celebrates the French passion for bandes dessinées, or comic books, and it was recently named a UNESCO Creative City. 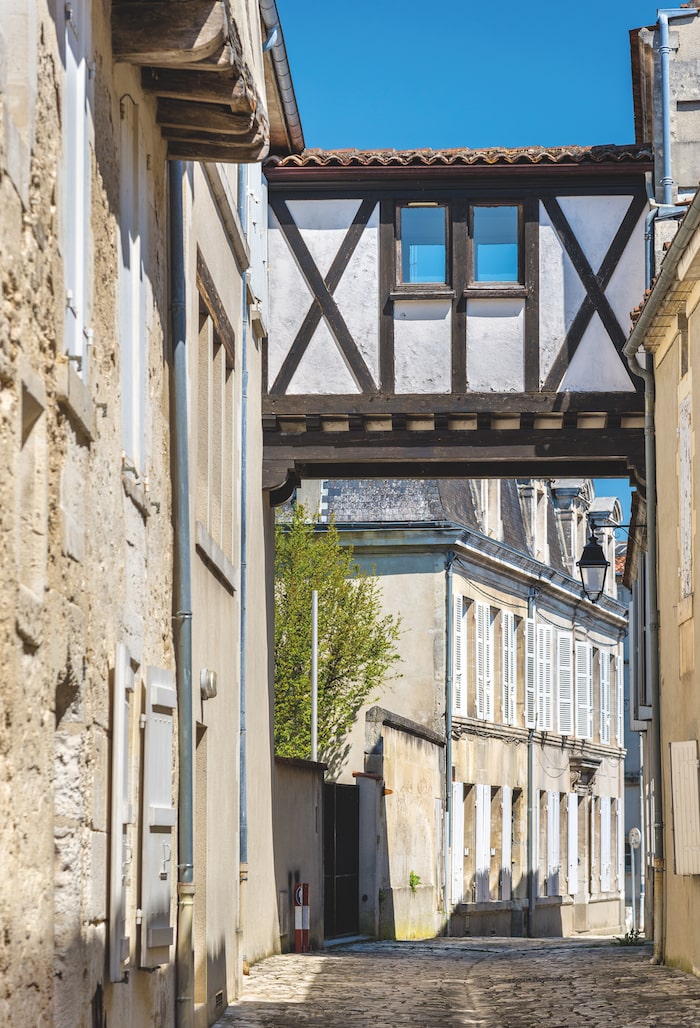 In 1969, three friends and BD fans created a festival in Angoulême to celebrate their shared interest. Five years later, it had morphed into the International Comic Strip Festival, which now attracts more than 6,000 professionals and 200,000 visitors for three days every January. And we’re not just talking Asterix the Gaul here, or Belgian import Tintin, but a serious art form that unites fans of all ages and backgrounds across the world. 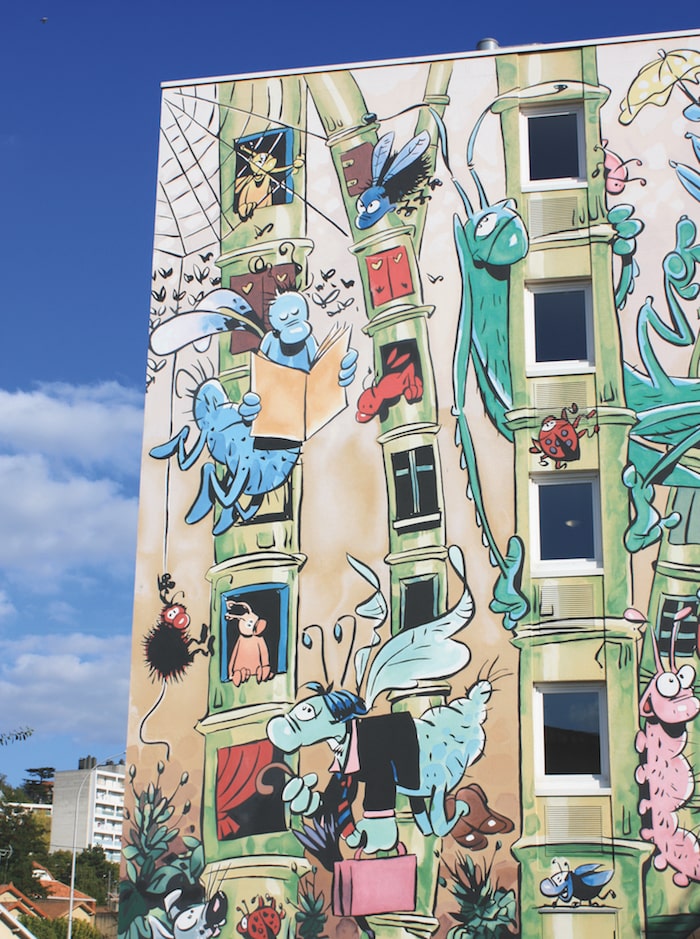 Visit Angoulême at other times of the year and there’s still plenty of BD atmosphere to enjoy. The name is a touch cumbersome, but La Cité Internationale de la Bande Dessinée et de l’Image is a must-see for fans of the ‘9th Art’ with its regularly changing exhibitions, bookshop and library.

And you don’t need any prior interest to enjoy following the Painted Walls trail around the streets to see murals that vary from a single figure to the entire side of an apartment block. I particularly love the blue rampart scene in which a girl gazes out over the rooftops, and the cheeky young woman you come across on the wall of a secluded courtyard placing a hand on her lover’s bare breast. 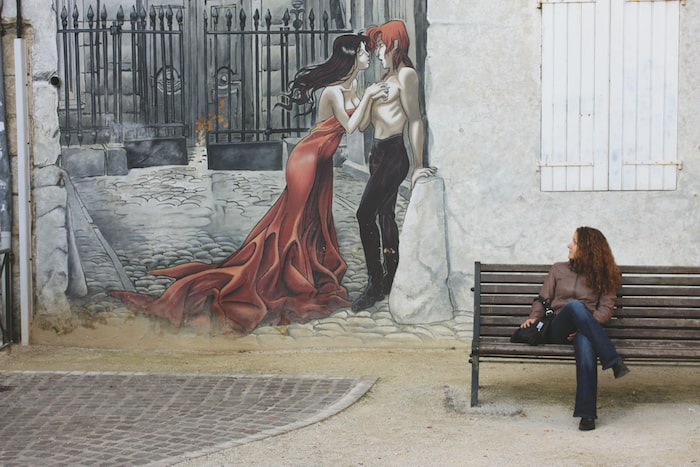 It was the introduction of double distillation in the early 17th century that really put both town and product on the international map. Eau de vie was stored in oak barrels. One day, a delay in loading left some barrels on the quayside. The liquid improved with age and could be drunk undiluted. By the 19th century, Cognac was being widely exported in bottles. The AOC vineyards are split into six areas or crus – Grande Champagne, Petite Champagne, Borderies, Fins Bois, Bons Bois and Bois Ordinaires – each one with its own clearly defined characteristics. Cognac is produced by blending several wines. This is a highly skilled job that is carried out by the Cellar Master in large Cognac houses. Once this is complete, the wine is left to age in oak casks. Blends are named according to the minimum age of the youngest eau de vie in the mix. So VS (Very Special) must be at least two years old; VSOP (Very Superior Old Pale) has to be at least four; and XO (Extra Old) at least six years old.

Pineau des Charentes is a local aperitif made from three parts grape juice and one part Cognac, drunk chilled as an aperitif or dessert wine. 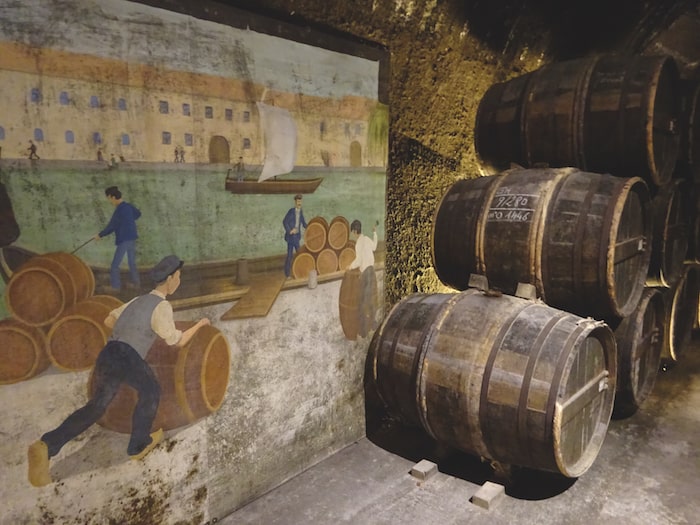