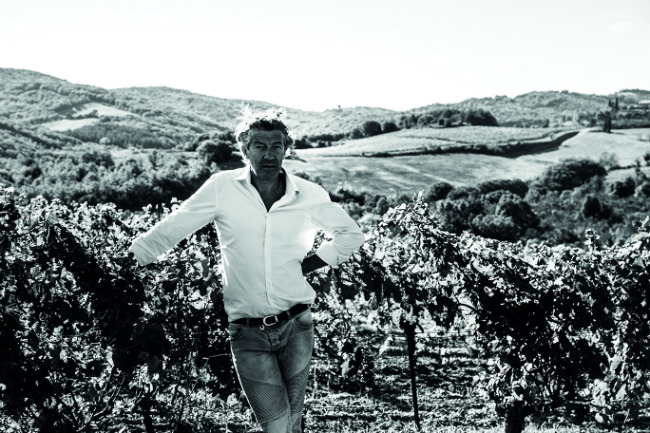 Seven o’clock on a Friday evening in September and the crowds outside the Narbonne stadium are fired up. The rugby match will bring together two rival teams, RCNM (Racing Club de Narbonne Méditerranée) and Carcassonne, for what the club president anticipates will be a tight match. As night falls, the warmth of a late summer day dissolves into a chilly evening best warmed with sizzling sausages and a fortifying drink before taking a seat amidst the sea of orange and black. Cheers and jeers, penalties and points… The crowd follows the nail-biting action with rapt attention.

And that’s when I first see Gérard Bertrand. He was “Le Grand” as a French “Barbarian” on the rugby pitch and he’s just as tall amongst us mere mortals. Perched at the edge of his seat, Bertrand follows the match as only a professional player can. Narbonne clinch the victory 23-19 and Bertrand, stylishly dressed in a chic sport coat and jeans, gallops down the stairs with a smile. 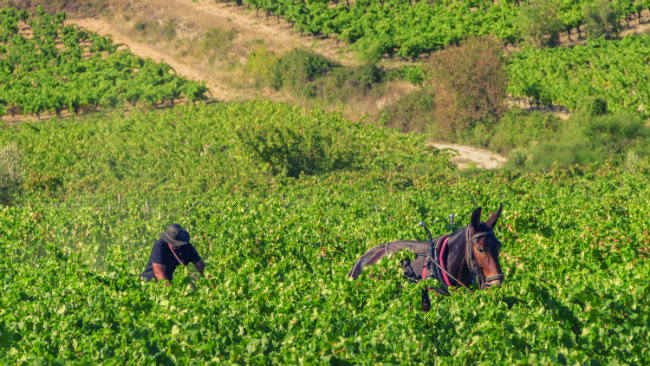 A former rugby star, Bertrand is today regarded as a pioneer in fine wine production in the Languedoc, helping to shatter the stereotype of the region’s wines as mass-market swill. Languedoc-Roussillon – a sweeping swath of southern France between Nîmes and the Spanish border, hugging the Mediterranean Sea – is one of the world’s oldest wine regions; the Greeks first planted vines here in the 5th century BC.

In fact, a sign at the entrance to Narbonne, the first Roman city in Gaul, declares it to be the “berceau”, the cradle, “des vignes françaises”. As the largest vineyard in the world, the Languedoc also came to be the largest wine producer, supplying the entire continent as the advent of the European railway system expedited exports. 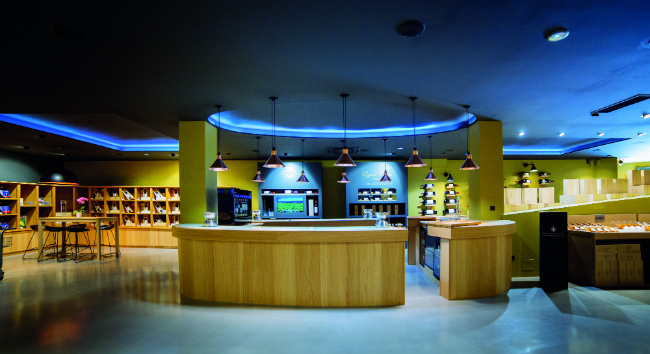 In his 1988 classic Adventures on the Wine Route, Kermit Lynch, the renowned American wine importer, writes of the region’s long-time dedication to high-yielding grapes: “Justifiably infamous for the volume of plonk it produces, the Languedoc is planted in grape varieties selected for the quantity they can produce. To almost all the winegrowers of the Languedoc, wine is a crop. They might as well be growing beans or potatoes.” Yet there were some vintages, even in the early 1980s, that convinced Lynch that “Languedoc is a land of enormous possibility. These are wines that grab you by the nose and force you to pay attention.”

It’s this potential that’s been recognised by a new breed of Languedoc winemakers, including Bertrand. Instead of producing table wine, his father, Georges, had worked to achieve true quality at his Corbières vineyard, sometimes butting heads with local winemakers as he broke with tradition. 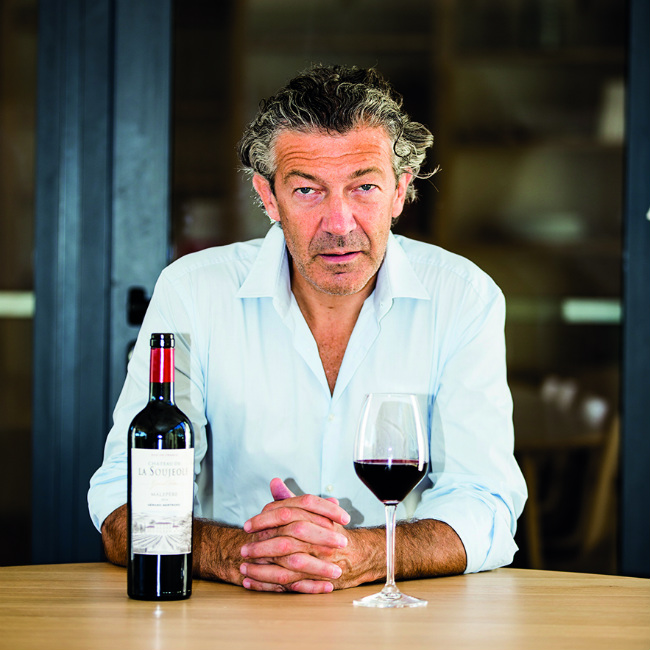 “My father believed that there were local grape varieties whose worth was underestimated and that were capable of revealing a sense of place,” Bertrand writes in his book Wine, Moon and Stars. (Fun fact: Georges was the first in the region to put wine in barrels, in the 1970s.) Bertrand started working in the vineyard when he was just 10 years old; wine and rugby became his twin passions.

“We would congregate at my grandmother’s house for a family get-together,” Bertrand writes of his childhood. “We only spoke Occitan. Politics was forbidden in an attempt to avoid arguments between my various uncles and aunts, with the radical socialists on one side and the Gaullist nationalists on the other. Passions ran high, particularly after a few homemade quinquinas. Better to stick to rugby or winemaking, where everyone was in agreement.” 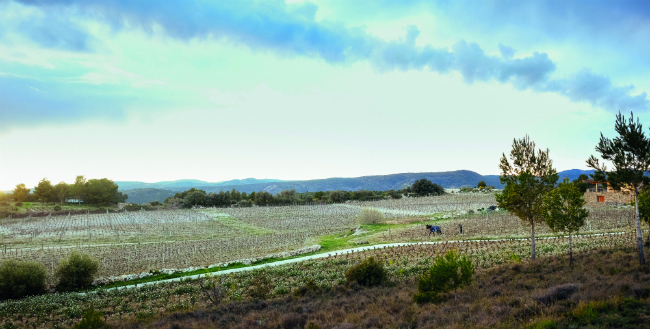 When his father tragically passed away in a car crash in 1987, Bertrand took over the family-owned vineyard at just 22 years old. He approached winemaking with the same Herculean energy he invested in rugby: building a solid network in France, learning the nuances of international markets, working with supermarkets at a time when it just wasn’t done. (Bertrand was Carrefour’s talent spotter for Languedoc-Roussillon wines, and later developed a partnership with Monoprix after Henri Gault, the celebrated food critic and co-founder of the Gault Millau restaurant guide, selected 11 of Bertrand’s wines, saying: “These wines are the future. They are fresh, accessible, and taste of the terroir. We need them.”)

Over time, Bertrand has successively added vineyards to his fiefdom, representing the diverse terroirs of his beloved native region. In many cases, he was not looking to expand, but local vignerons sought him out because of his passion and expertise. In 2002, the previous owner of Château l’Hospitalet, Jacques Ribourel, approached Bertrand; and the bishop-winemaker Monseigneur Bertrand de La Soujeole asked him to take over his Malepère-producing domaine in 2012. 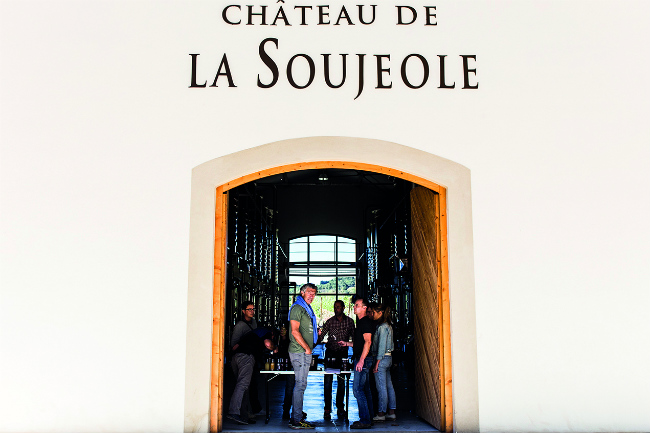 Today there are 12 estates in the portfolio, and his premium wines are sold in 100 countries around the globe. Bertrand is a self-made man, and in his work, rooted in the values he learned on the rugby pitch – teamwork, fraternité, la valeur du partage. He has helped Languedoc wine overcome its stigma, developing a reputation as haut de gamme. But what is perhaps most important is that all 12 of his estates are farmed using biodynamic methods. In fact, Bertrand is the global leader in biodynamic wine production.

Following the rugby match, I hit the hay at Château l’Hospitalet, the 2,400-acre winery that’s a model of wine tourism in the region. From Narbonne, it’s a scenic 20-minute drive up to the Massif de La Clape, a protected conservation area perched above the Mediterranean. In Antiquity, La Clape was actually an island, surrounded by the sea. It’s a hauntingly beautiful place studded with limestone outcroppings and Aleppo pines. (“Clapas” in Occitan means “pile of stones”.) When Bertrand acquired the estate in 2002 – with some of the buildings dating back to the 16th century – he vowed to expand the wine tourism concept that the previous owner had pioneered. Building on these traditions, Bertrand has championed the idea of sharing the Mediterranean art de vivre. 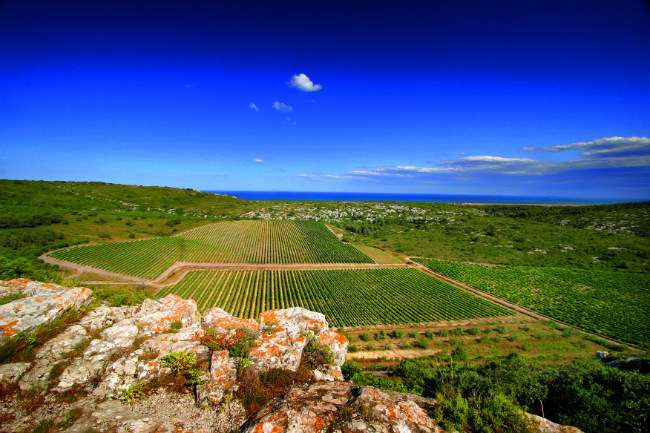 Château l’Hospitalet has 38 guest rooms, each named for a different Gérard Bertrand wine, which is stocked in the room. They are designed in a contemporary style with colour schemes inspired by the natural elements of La Clape: the vines, the soil, the sea. From my window, I take in views of greenery as far as the eye can see. 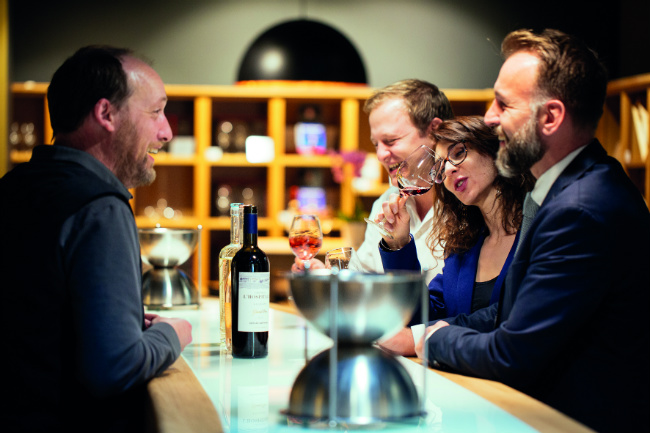 This weekend is the Fête des Vendanges, when Bertrand welcomes his clients and friends for a merry harvest celebration. There are pétanque games, wine tastings, grape-picking competitions, and unforgettable meals. (I am still dreaming of the dynamite pairings: Cigalus Aude Hauterive with a millefeuille of foie gras and sea bass; Clos d’Ora Minervois-La Livinière with an aged Aubrac steak.) Lunch tables are set up in the garden next to the swimming pool, piled high with platters of local oysters and ice buckets filled with bottles of Château La Sauvageonne Volcanic Rosé. 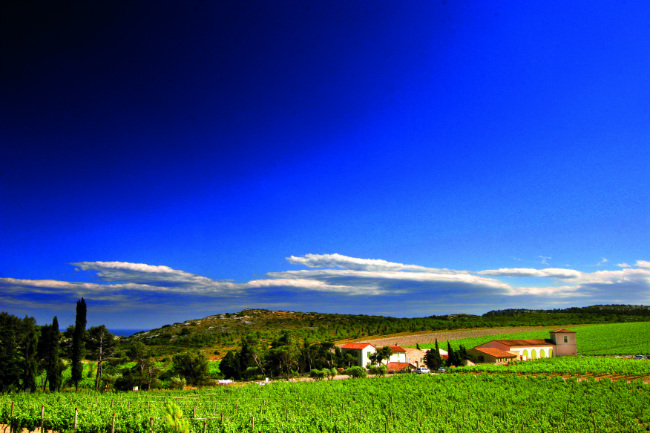 I spy Bertrand returning from a morning run through the vineyards, gregariously chatting with his guests.

When did he realise the importance of biodynamic agriculture? I ask him. “I practiced homeopathic medicine for years, and then I read Rudy Steiner’s work in 2002,” he explains. (A trained scientist, Steiner was the founder of the biodynamic approach to agriculture in the early 1900s.) This moment was an epiphany. Bertrand began to question – he elaborates in his own book – “how the moon and the planets, and their interplay with the rocks and limestone in the soil, influence the taste of wine.”

After all, ancient agriculture practices made use of the understanding of the importance of the rhythm of the lunar calendar. A great wine is a product of more than just its terroir and grape variety. It’s connected to the universe that surrounds it. 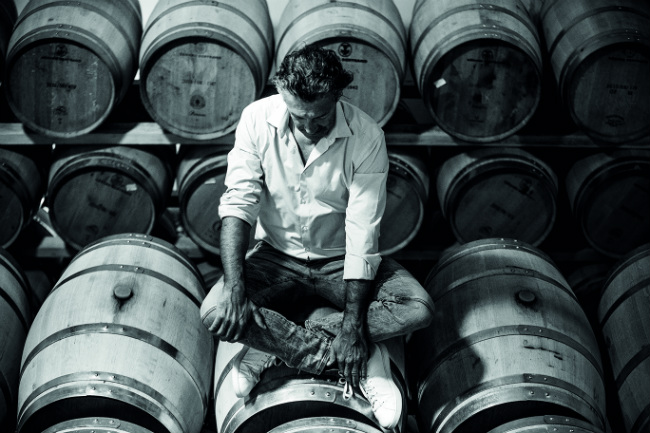 Experimenting with biodynamic practices at the Cigalus estate in 2002, they started to notice how the vines were getting healthier and the grapes were reaching a better ripeness. They then expanded to L’Hospitalet, La Sauvageonne and Les Karantes. And now all 12 estates are farmed biodynamically. “Its important to respect nature, to respect biodiversity,” Bertrand tells me. “I go to work every day in an electric car; we promote organic food and renewable energy. Above all, we try to be a voice for these important issues.”

There is another important element to Bertrand’s work: spirituality. Clos d’Ora, the prestigious estate in La Livinière, is an expression of this. There is a meditation hut on the property, and guests are invited to remove their shoes to feel the soil between their toes. It’s here where Gérard Bertrand has experimented with a path that links biodynamics and quantum theory. 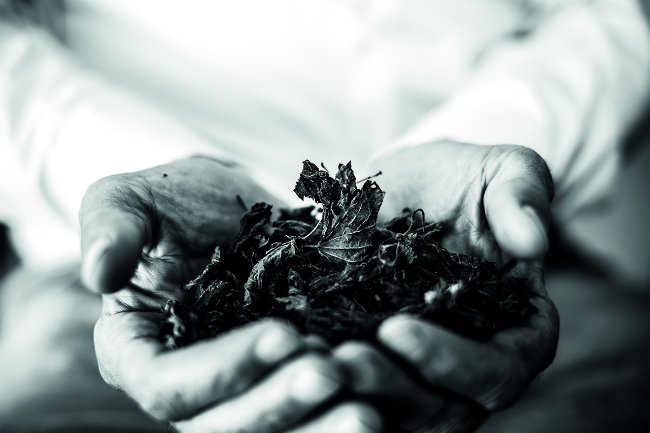 As he details in his book: “Quantum wine respects a process of rigorous vinification and aging, of mastering the art of blending and of farming biodynamically; of delivering waves of emotion, vibrations, resonances and with them a message of peace.” Because, as he says, “great wines are capable of stirring emotion”, even inspiring a “transcendental experience”…

In the late afternoon, I take a stroll around L’Hospitalet’s estate and I’m struck by the wild, rugged beauty of the landscape. From the top of the hill, studded with craggy limestone boulders, I can see the Mediterranean glittering in the distance. Below is a low plain planted with rows of vines baking in the sun. I follow a path through the garrigues, or scrubland, and I contemplate the silence. The only sound is the chattering of swallows as they swoop and dive over the land that’s still emanating heat from the day’s abundant sunshine, fragrant with that heady Mediterranean perfume of wild lavender and earth. And in this landscape – as in Gérard Bertrand’s wines – I sense a touch of the divine. 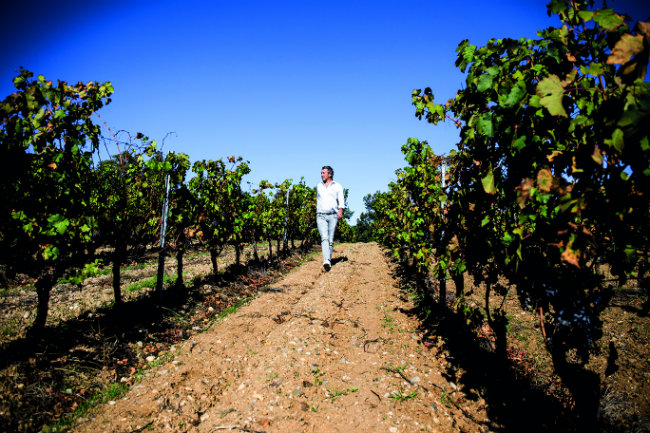 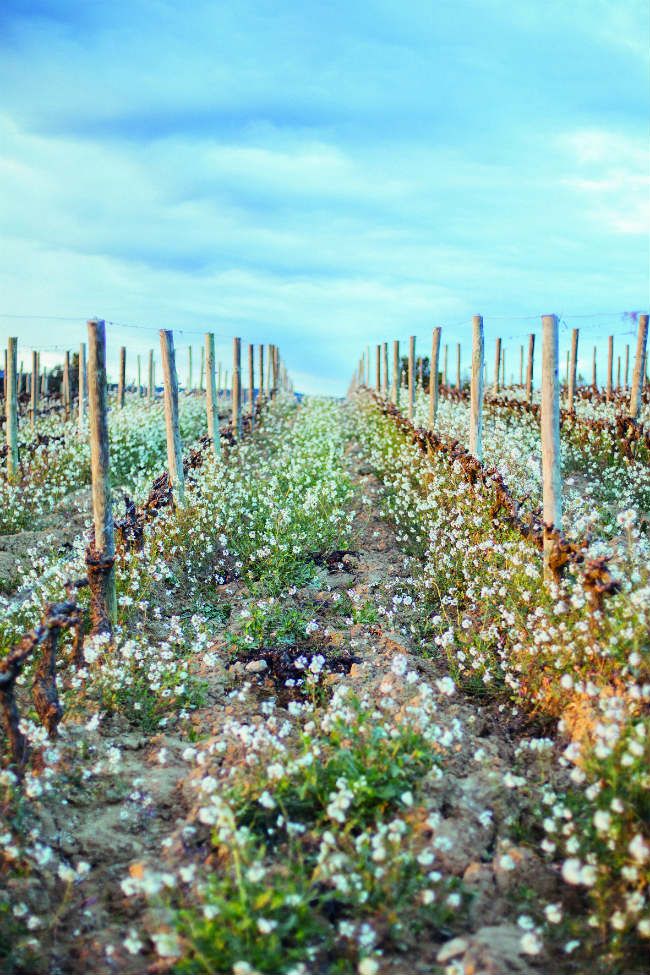