Life in the Slow Lane: Boating the Canal du Midi 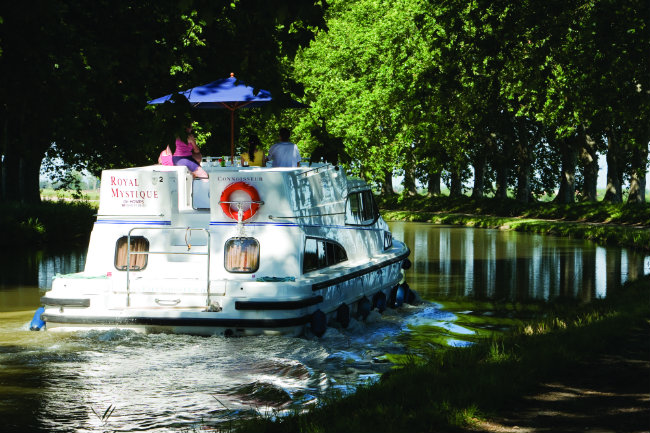 It was the first of many such moments. Sitting high up on the sun deck, cold beer to hand, gently guiding our Royal Mystique cruiser along a stretch of the Canal du Midi, I see unfold before me a long, sweeping bend in the canal with a graceful line of stately plane trees casting broad shadows across the water. On the other bank, two cyclists glide along the tow path and behind them a field of poppies like scarlet brush-strokes leads up to an old hillside chapel garlanded with cypress trees. Another glorious Monet-esque photo opportunity, but even at six knots you daren’t let go of the wheel for a second, even to grab your camera.

“Take the helm, Master Alex,” I said. “Aye aye, captain,” said the first mate as he sprang into action. At least that’s how the dialogue went in my Master and Commander-fuelled imagination. The reality was, disappointingly, a lot more informal. Being self-appointed captain really ought to require more deference from the crew, I felt, but everyone had become very relaxed on this mini-voyage. And to be fair on the crew it’s hard not to wind down – the pace is so leisurely. Everyone has time – time to take photos, time to play games, time to stop and cycle through the villages or to prepare an on-board meal with fresh ingredients bought at a canal-side village. 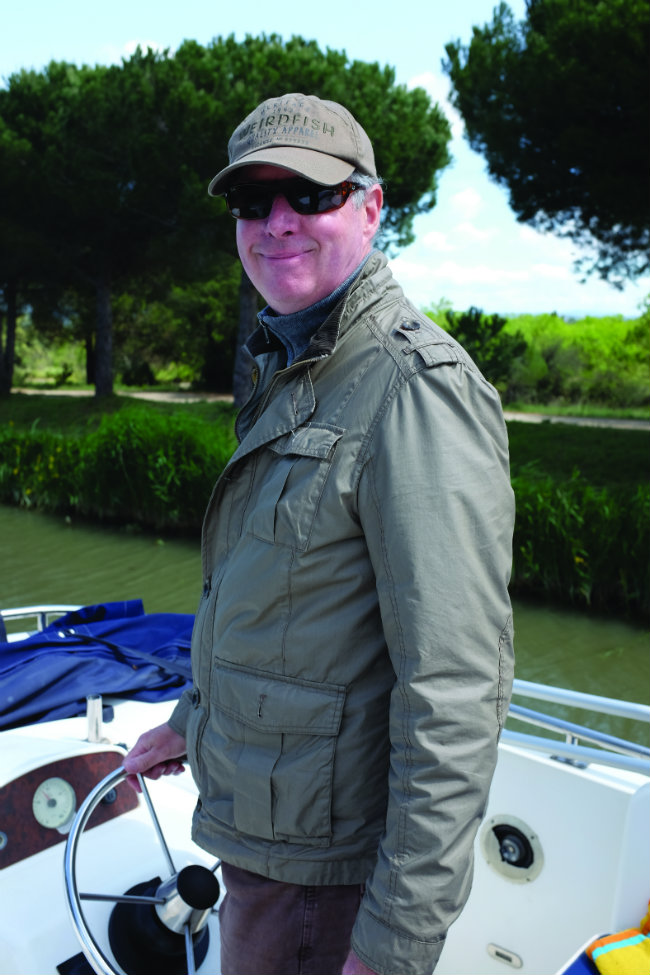 By day three the weather was pleasant, the sky was deep blue and we were confident with the boat and feeling pretty chilled. But it hadn’t always been like this. Late May can be changeable even this far south in France and our first nervous forays from Narbonne up the narrow Canal de la Robine had been met head-on by heavy squalls. Whose idea was it to go for a self-drive boat I wondered? As the so-called crew warmed themselves downstairs in the cosy cabin, your captain was up top trying to get the hang of steering while clutching a golf umbrella against the wind and rain. Eventually the umbrella lost its futile battle against the elements and, after another half-hour of getting soaked, I decided to turn the ship around and head back to an overnight mooring at the nearest available village. We could only hope for better conditions the next morning.

That evening we huddled in the cabin with takeaway pizzas, some good local red wine, a selection of old hits on the sound system, and proceeded to rediscover the pleasures of playing cards en famille. The next morning brought sunnier weather but still with a crisp wind, and although fortified with fresh coffee and croissants I was a little apprehensive: we were moored in a tight spot in the centre of Sallèles-d’Aude, facing the

wrong way, and the stiff breeze was blowing down the canal to the sea. Somehow I had to execute a 180-degree turn across the narrow canal with a 43-foot boat, avoiding the barges moored on either side and trying to ignore the stares of curious onlookers. 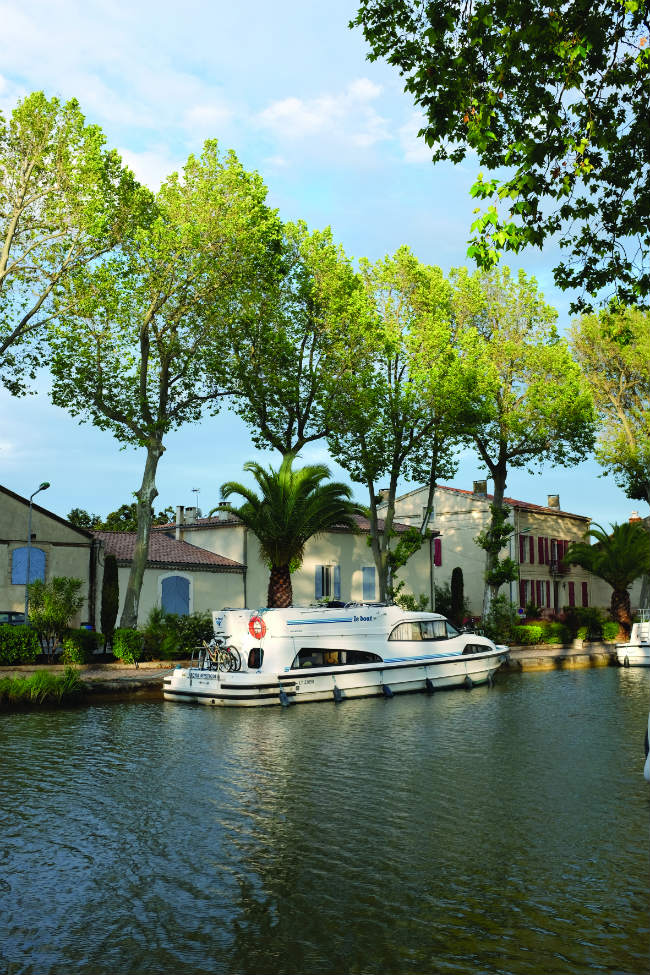 The morning after the rain in Sallèles-d’Aude. Photo: Guy Hibbert

Luckily these boats are fitted with bow thrusters, and once you get the hang of these little beauties you’ll be amazed at the control you have. With some preplanning we figured out our best course and with judicious manoeuvring we actually made a rather graceful and controlled turn. I tried to look nonchalant as someone on the barge nearby gave me a thumbs up.

I had been anxious about the locks and whether my two 19-year-old crew members would be able to simultaneously handle the lock controls and the ropes while listening to music on their headphones and checking social media – I kid you not. But it was okay. 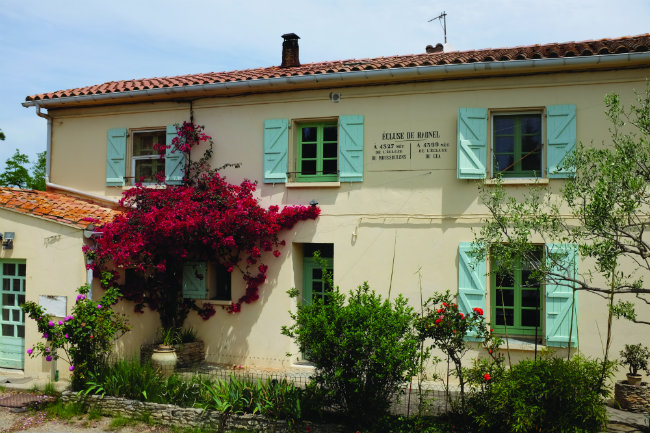 The locks are automatic. You take your time and you get the hang of it. In fact, by the time you’ve navigated the nine locks between Narbonne and the entrance to the Canal du Midi, including a turn across the Aude river, you’ll feel there’s nothing to this lock business. It can be quite a sociable affair, as tourists wave or offer help, or when you find yourself sharing the lock with another boat. In one lock we found ourselves alongside some friendly Germans, so we got chatting and they shared some tips on good dining and dégustations.

“How long is your boat?” one of the Germans shouted across the noise of inrushing lock water. I had no idea, it hadn’t occurred to me to note it down. “Mine is 12 metres 20,” he said, and I could see he was eyeing us up from bow to stern before pronouncing, “Yours is bigger.” He seemed a little downcast about this. Perhaps boat length is important in nautical communities? Ours was 13.25 metres, in fact, enough to sleep six at a push but the four of us were very comfortable with two private cabins – each with its own WC and shower – heating and air-con, a large dining area, a serviceable little kitchen and, best of all, a top sundeck with loads of seating and a bimini canopy/sunshade. There’s even a built-in barbecue. 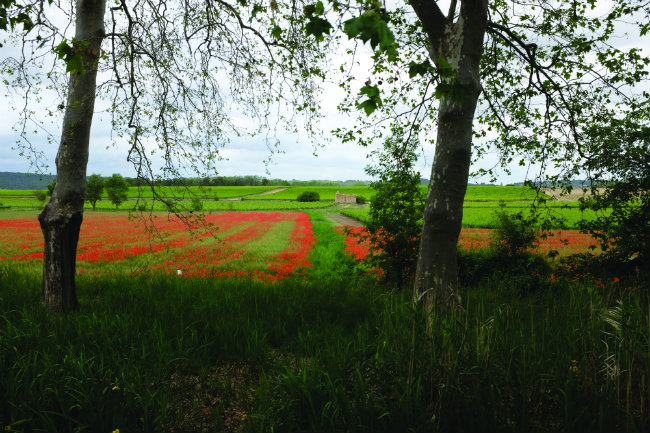 The Canal de la Robine is a picturesque stretch with banks lined with grand umbrella pines and views to the distant snow-capped Pyrenees. But it’s only a prelude to the main attraction: the masterpiece that is the Canal du Midi. This 17th-century marvel was built under the direction of Pierre-Paul Riquet and was a feat of engineering unparalleled in that age, linking the Atlantic Ocean with the Mediterranean across the whole of southern France. It was commissioned by Louis XIV in 1666. The colossal task of digging and construction began in 1667 and ended in 1681, a year after the death of Riquet. It’s now listed as a UNESCO World Heritage site. 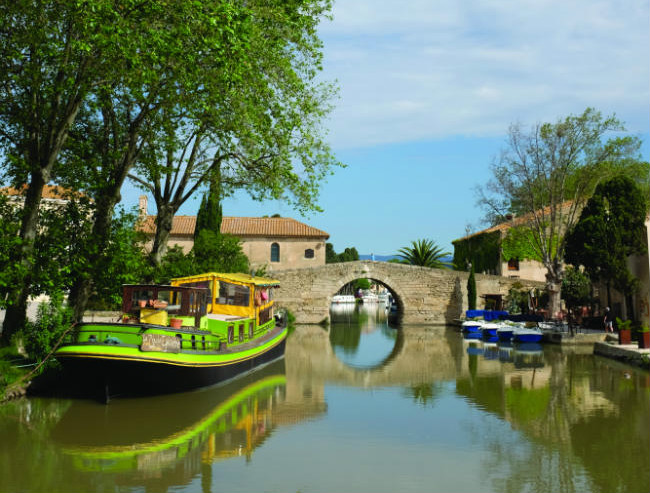 First stop on our mini-voyage was Le Somail, a quaint and historic little village with some good restaurants and cafés and a charming auberge. To enter Le Somail you have to steer carefully as you pass under the tiny Pont du Riquet, one of the oldest and smallest bridges on the canal. There are signs on the massive stone arches of many a scrape but luckily we glided through unscathed. Mooring up nearby, it’s fun to get the bikes off the deck and explore the local lanes. La Péniche Épicière is a cute grocery store on an old barge, there’s a beautiful chapel, an ancient ice-house dating back to the 1600s, a guard house and other buildings that testify to the former life of this village as an important harbour for trade and travellers in the 17th, 18th and 19th centuries. Perhaps the most unexpected discovery in Le Somail is the antique bookshop, Le Trouve Tout du Livre, a wonderful old former wine cave lined with over 50,000 antique and vintage books and magazines. I can’t resist buying some vintage magazine covers from the ‘50s and ‘60s. 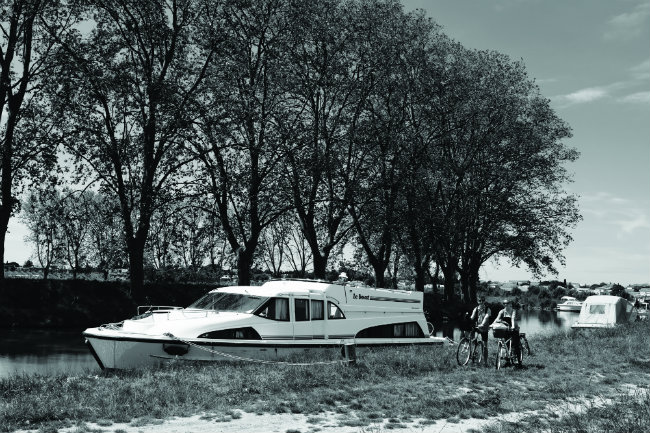 Time to get on the bikes. Photo: Guy Hibbert

Not far from Le Somail, at Ventenac-en-Minervois, we moored up for a dégustation at the Château de Ventenac. Here under the massive brick-vaulted ceilings of the cave you can taste the Minervois red wines which have a uniquely rich flavour and bouquet from the blend of Carignan, Mourvèdre, Grenache, Syrah and Marselan grapes. The ‘Lea’ rosé is appealing and we also enjoyed the Viognier. 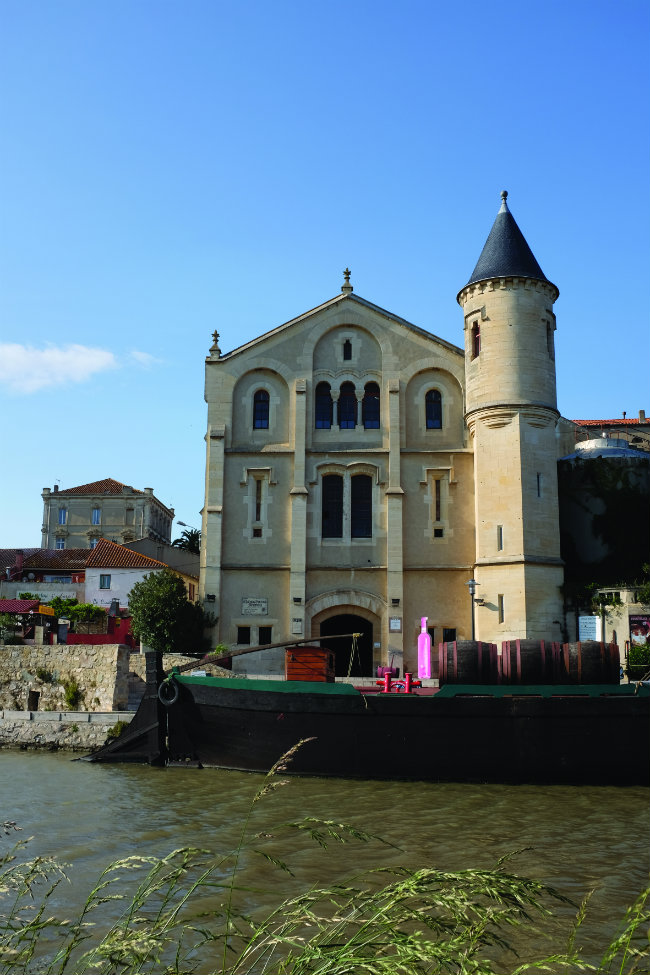 A westerly cruise in this direction takes you through pleasant countryside via the busy boating village of Homps and on to the medieval city of Carcassonne. But our next route took us in the other direction, east, towards Béziers. With more time we would have had to navigate the famous staircase locks of Fonserannes, where eight gates and locks lift you up 21 metres in just 300 metres of distance. But we had more leisurely pastimes in mind – why rush? Picking a grassy bank for our next mooring, near the village of Argeliers, we made fast the lines and pedalled off in search of picnic provisions. A speedy visit to the boulangerie and the épicerie and we returned with baskets laden with local fruit and other goodies. A couple of blankets on the grass, baguettes and Coulommiers cheese, a glass of Ventenac’s rosé and it was time to lie back and watch the clouds sail across the Languedoc sky. 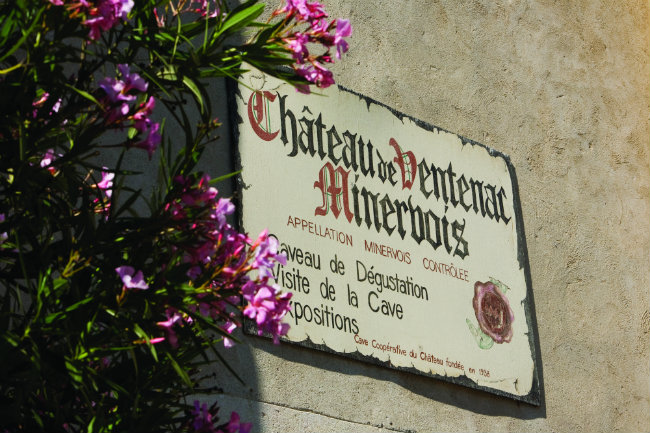 At our pleasingly snail-like pace I wondered how long it might take to explore the canal from Toulouse via Carcassonne, onto Béziers before finally traversing the great inland lake of Thau and arriving at the Mediterranean in Sète? Months, or perhaps the work of several years for canal boat enthusiasts, returning every year for a few weeks of watery adventures.

The great joy is that you simply can’t rush along, so you’re forced to slow down. And when you slow down you notice more of the world around you. Your friends and family have time to share thoughts and memories with you, the scenery and landscape take on subtle variations and nuances that you never notice from behind a car window. You spot herons fishing in quiet corners. You enjoy the camaraderie as you wave to passing boats; a fluffy flotilla of ducklings puts a smile on everyone’s face. You stop to read the notices about the sad decimation of the famous plane trees that line the canal (join the campaign to re-plant new trees here). You admire the extraordinary strength of the ancient stone bridges that have survived intact for over 300 years. Waking in the middle of the night you get up and watch the moonlight reflected in the quiet ripples of the canal. 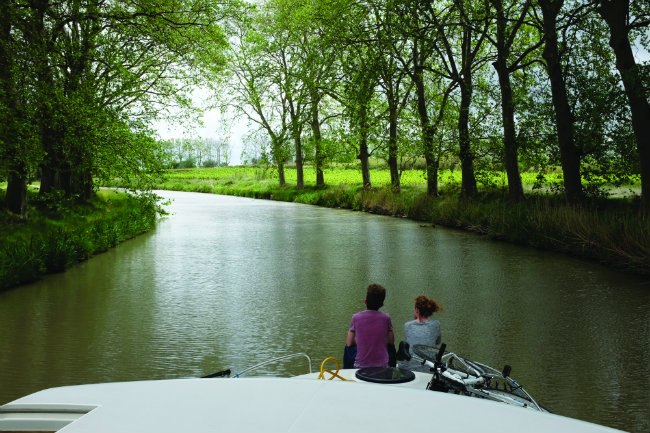 We returned to our base in Narbonne tanned, relaxed and confident canal boaters. On our journey back we passed a couple of the magnificent luxury barges that ply their trade along this route, all gleaming brass, polished teak and cordon bleu cooking. I confess they looked pretty tempting but we all agreed that for this trip we had enjoyed being free to meander as we wished and to indulge in another kind of luxury that’s hard to track down in our busy, technology-driven lives – the luxury of slowing down time. 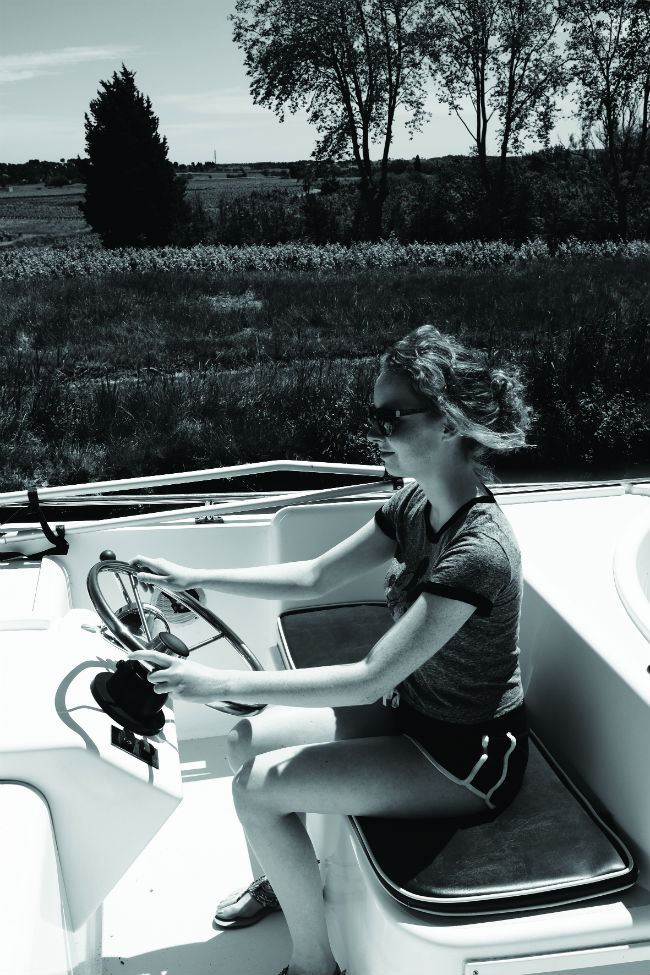 Everyone can drive. Photo: Guy Hibbert