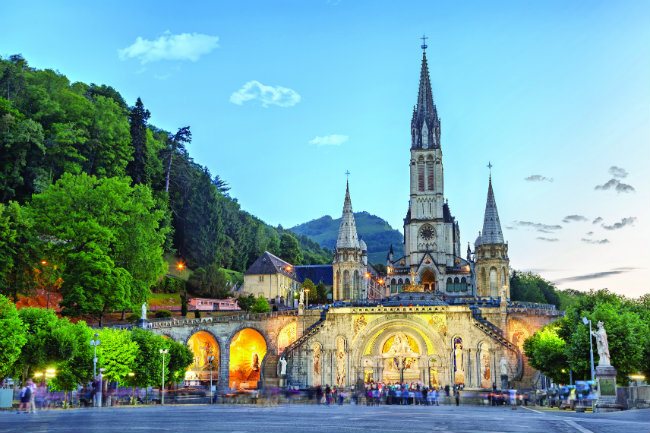 For 159 years, millions of the faithful from all over the world have flocked to Lourdes, where, it is said, the sick can be healed miraculously. But as 21st-century medicine refuses to declare any disease incurable, the bar on what can be deemed a miracle has lowered. The Church has adopted a weaker definition of ‘miracle’, which, as I discovered, is the biggest miracle of all.

The Boulevard de la Grotte is teeming as I arrive on a sunny, cold October morning. After meeting my guide, Patricia Colan, at the train station, we make the short walk over the bridge that spans the calm waters of the Gave de Pau. Normally a fast-flowing river cascading down from the Pyrénées mountains, today it is calm, rolling gently through the 52 hectares of property and 22 places of worship that comprise the Sanctuary of Our Lady of Lourdes. As I am sure you already know, here, in 1858, the Virgin Mary appeared to a local girl named Bernadette. 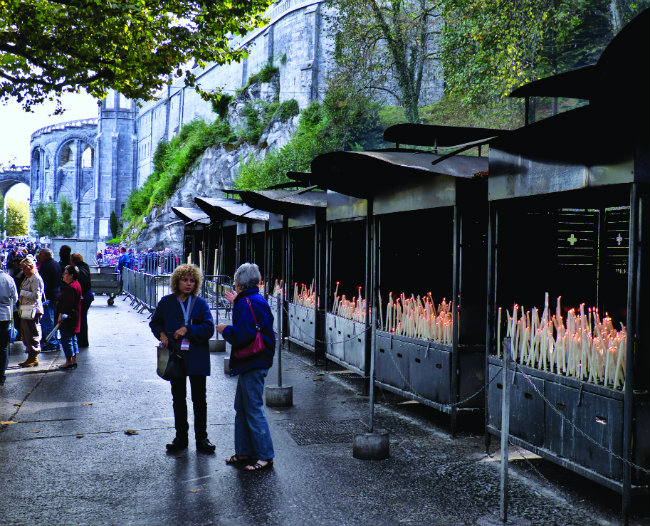 In Lourdes, it is traditional for pilgrims to light a candle in front of the grotto and leave it on these trolleys. Photo: Sue Aran

A small crowd has gathered at the imposing iron Gates of Mercy waiting to pass through a security checkpoint that was instituted after acts of terrorism shook France throughout last year. Even the sanctity of Lourdes is not immune from terrorism, I learned from Patricia while waiting in line. The village was once the possession of the Muslims of Al-Andalus, who controlled Spain and Portugal. During the 8th century, Lourdes and its imposing fortress, now the Musée Pyrénéen, which I could see clearly rising from a rocky escarpment over my right shoulder, became the focus of battles between Charlemagne, King of the Franks, and Mirat, the local Muslim leader, who eventually converted to Christianity. On the day of his baptism, Mirat took the name Lorus, which was later given to the town now known as Lourdes.

We walk along the expansive esplanade towards the three-steepled Basilica of the Rosary that rises majestically in the distance like a Byzantine wedding cake, its curved ramps metaphorically embracing all who enter. In 1858 Lourdes was a remote, unremarkable French village of 4,000 inhabitants nestled against the foothills of the Pyrénées, 180 kilometres east of the Atlantic Ocean. It was a place travellers passed through on their way to the spa villages at Barèges, Cauterets, Luz-Saint-Sauveur and Bagnères-de-Bigorre. Among the residents was a poor miller named François Soubirous. He and his wife, Louise, had nine children, the eldest, Marie-Bernarde, was known as Bernadette. She was fortunate to survive cholera as a young child, but was left infirm and severely asthmatic. She couldn’t read or write and the only education she’d received up to then was religious. 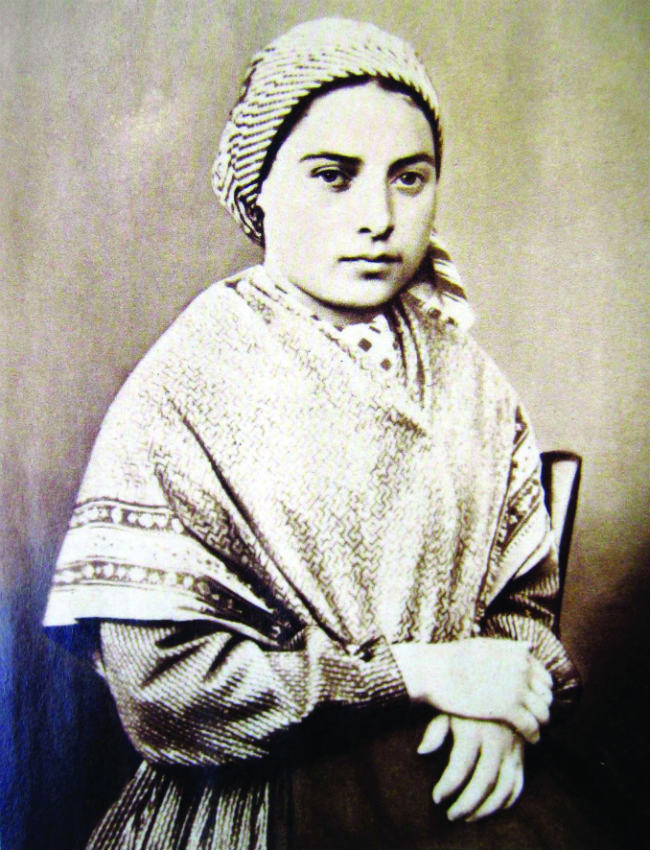 On February 11, Bernadette, then aged 14, was out gathering firewood with one of her sisters and a friend, half a mile below the village on land bordered by a loop in the Gave de Pau, near a rugged outcropping known as Massabielle. On the northern side of Massabielle, near the riverbank, an irregularly shaped grotto lay in shadow. The girls crossed the stream in front of the grotto in search of kindling. Suddenly, Bernadette heard the sound of rushing wind, though nothing else stirred. Following the sound, her eyes were drawn to a dark alcove above the opening of the grotto, where she saw the shape of a lady in a white veil surrounded by dazzling light. The other girls saw nothing. 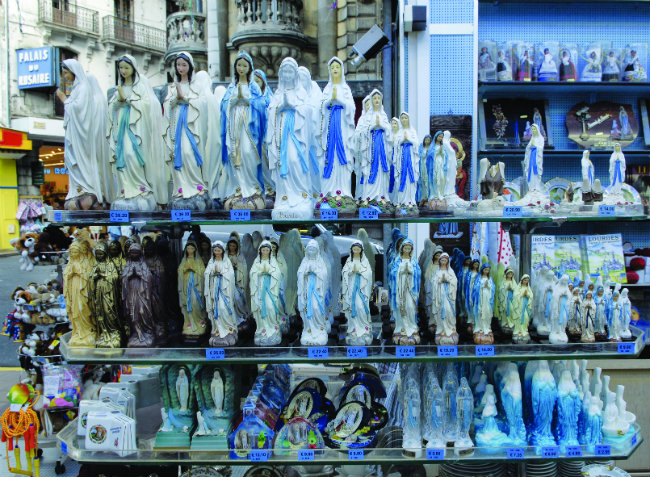 Word of her vision spread quickly and swarms of the sick and dying descended upon Lourdes in pursuit of a glimmer of hope. They followed Bernadette to the grotto, but still no one except Bernadette ever saw anything. During the ensuing weeks the apparition imparted many revelations to Bernadette, including the source of a therapeutic spring in the cavernous hollow, and soon rumours escalated that after drinking the water tumours shrank, cancers went into remission and the paralysed walked. Within the course of six months, the apparition appeared to Bernadette a total of 18 times. Upon her last visitation, the lady disclosed herself to be the Virgin Mary. This final revelation would soon make Lourdes one of the most famous pilgrimage destinations in Christendom, behind only Rome; and Bernadette a saint. 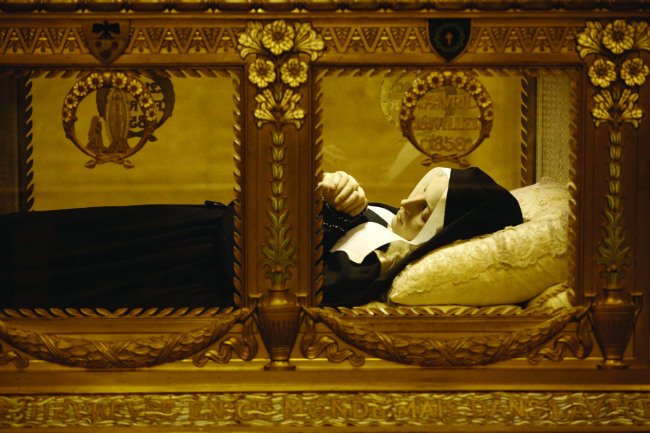 Bernadette’s shrine in Nevers, where she died of tuberculosis. Photo: Sue Aran

Nearly eight years of rigorous investigation followed, offering no explanation for some of the miraculous cures that had occurred. But Bernadette never wavered from her story, despite being repeatedly interviewed by the local bishop and church experts dispatched from Rome. Quite possibly her innocence and sincerity made her testimony all the more believable, and her revelations were finally declared authentic by the Church in 1866. By then she’d left Lourdes and joined the Sisters of Charity at the Saint Gildard Convent in Nevers, 600 kilometres to the north, where she lived in relative seclusion until her death from tuberculosis at the age of 35. Inexplicably, she never returned to Lourdes in search of a cure for herself. Bernadette achieved sainthood in 1933 and was enshrined at the Saint Bernadette Chapel on the grounds of Saint Gildard. 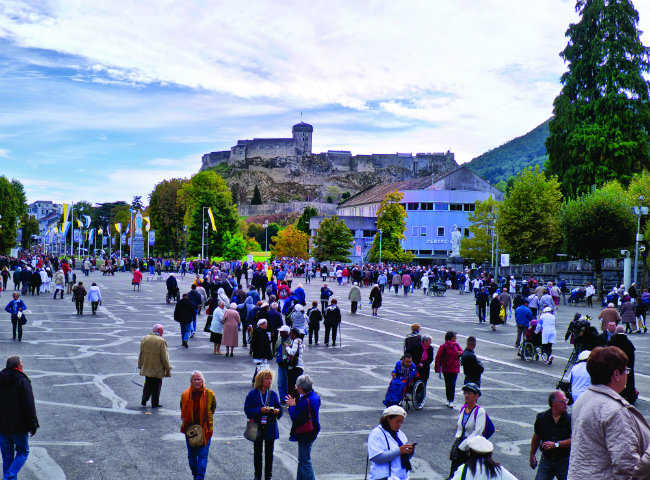 Tourists gather on the
esplanade in Lourdes. Photo: Sue Aran

The Song of Bernadette

The phenomenal 20th-century cultural popularity of Saint Bernadette was likely due to Franz Werfel’s 1941 book, The Song of Bernadette. Werfel, a German Jew, and his wife, Alma, former widow of famed composer Gustav Mahler, were sequestered in Lourdes for five days during their escape to America after France fell to the Nazis. They were hidden by local families who shared the story of the Saint’s visions and subsequent miracles. Werfel vowed that if they reached America, he would write the story, which was subsequently made into the eponymous film starring Jennifer Jones.

Patricia and I stop in front of the famous Grotte de Massabielle, where more than six million people gather each year below a statue of the Virgin Mary that sits in the alcove where Bernadette first saw her. We watch as small clusters of pilgrims emerge from the cavernous shrine, sit on benches arranged for contemplative prayer, light candles in reverence, or fill containers with holy water. The grotto’s inexhaustible spring, which flows at a rate of 32,000 gallons a day, also feeds the adjacent healing baths. Analysis of the water has detected nothing remarkable, except that it is pure and potable. Patricia confides, “One must have faith: the water will have no virtue without faith.” 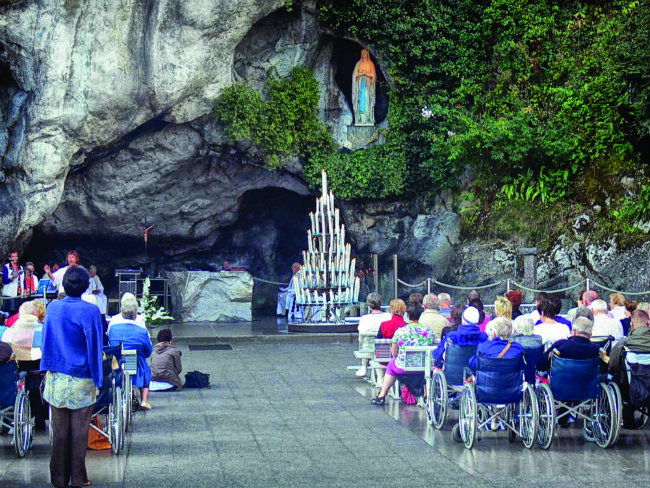 It is easy to be sceptical about miracles, but under the leadership of the former, now emeritus Bishop of Lourdes and the neighbouring village of Tarbes, Monsigneur Jacques Perrier, change has finally come. A cohesive physical plan for the Sanctuary has been developed. More shade trees will be planted along the esplanade’s path to the grotto to protect the faithful from the elements of weather. The candle trolleys that burn several tons of wax per year will be moved across the river, allowing more space in front of the grotto for silent prayer and daily Masses. The taps for collecting holy water will be re-situated and the healing baths redesigned, with a new footbridge crossing the Gave de Pau to streamline the passage of the handicapped and sick, who are pushed on stretchers and in wheelchairs, and the simply curious. 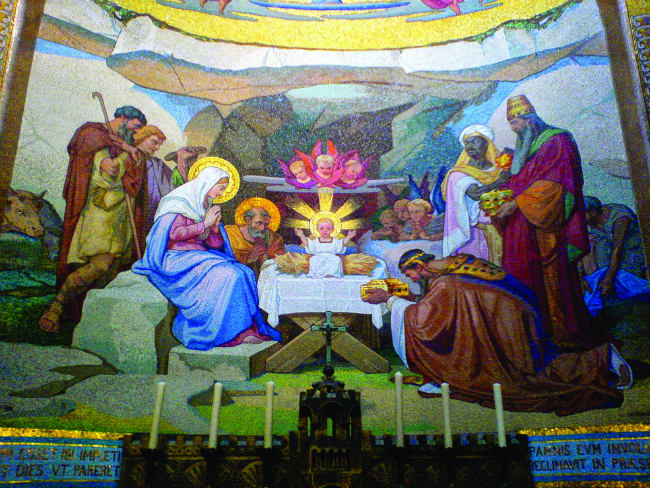 Mosaic of the Christ Child in the Basilica of the Rosary. Photo: Sue Aran

The most extraordinary change at Lourdes has been the validation of the mystical and spiritual experiences some pilgrims have undergone. Thousands of unexplained ‘healings’ have languished in the Lourdes’ files because they do not meet the Vatican’s strict criteria for miracles laid down 300 years ago: miracles must take place instantly and people must be permanently cured. Since 1882, 7,000 people have asked to have their cases declared as miracles, but only 67 have been sanctified.

Monsigneur Perrier explains, “We are no longer in the 19th century and we cannot reject declarations of cures made by people in good faith.” The Church now acknowledges another category called ‘miraculous (unexpected, confirmed and exceptional) healings’. Wisely, leaders like Monsigneur Perrier and the current Bishop, Monsigneur Nicolas Brouwet, are positioning the church to reach a changing community by becoming flexible and adaptive. Quite possibly, the easing of the rules is an attempt to attract more visitors to Lourdes, but the Church has come to understand that by embracing those from different cultures and religions marginalised in daily life, everyone benefits. 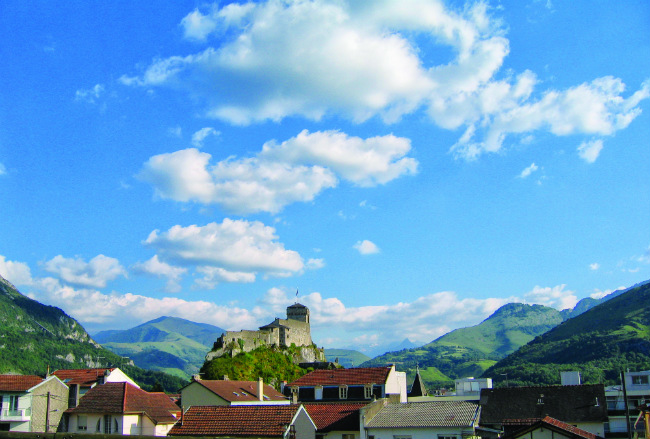 The fortress in Lourdes is now a museum. Photo: Sue Aran

It is tempting to think of the Sanctuary of Lourdes as a magical place where all one has to do is collect some holy water, pray and miracles will occur. But what happens when a pilgrim comes to Lourdes and doesn’t experience a healing? Patricia responds, “It’s a mystery why some are healed and others aren’t. I’ve come to believe miracles happen in people’s heads. Faith is the essential ingredient. Faith is not just the domain of religion. It goes to the heart of what it means to be human in an uncertain world.” 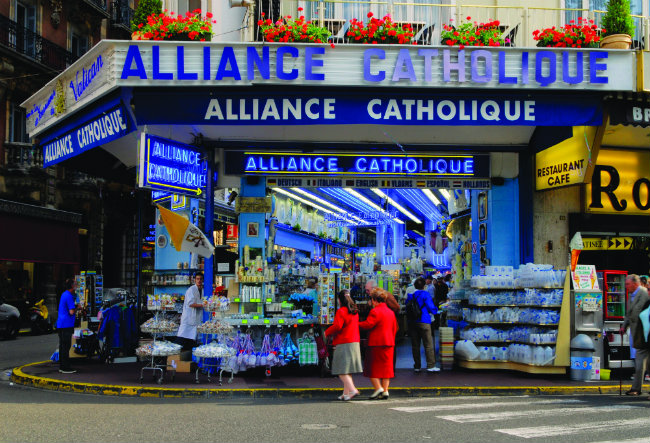 A gift shop rewards
pilgrims with souvenirs of their visit. Photo: Sue Aran