Why Nîmes is the Best Spot in France for History Lovers 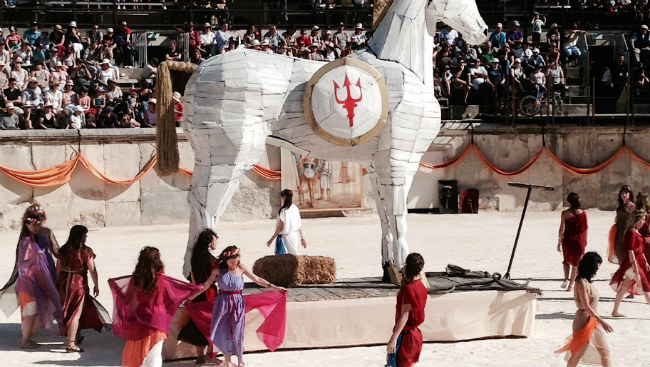 France has so many amazing places to visit it’s hard to decide where to start. If you’re a Roman history buff, you must visit Nîmes.

Nîmes is a city where you can see, touch and experience life in France during the days of the Roman Empire. Rich with artifacts from Augustus Caesar’s time, many of the grand structures are in active use still today.

In Nîmes you can walk on the same streets, into the same buildings … literally sit in the same seats as the Romans who once occupied this part of Gaul.

I’m not talking about a civilization in ruins. Nîmes possesses some of the most prized, intact examples of Roman life in existence. A temple, an arena, a tower from the original town wall. Living monuments from a time before Christ are being enjoyed now, in the 21st century. the city at night by Deborah Bine

The Roman History of Nîmes

The area surrounding and including the city of Nîmes was an established community as early as 400o BC. It became a Roman colony just before the reign of Augustus (27BC-14 BC). In Roman times Nîmes was known as “Nemausus,” a word derived from the name of a Celtic god — the protector of the nearby spring that provided water for the early settlement.

As part of the Roman Empire, Nemausus benefitted from great wealth and from an era of relative peace, Pax Romana (Roman Peace). The city reflected its opulence with grand architecture typical of a prosperous Roman colony.

Among the most famous is the Maison Carrée — originally a Corinthian temple that dominated the city’s forum. The splendid building is reportedly the only fully preserved temple of the ancient world.

It is said that Thomas Jefferson became so enamored with the Maison Carrée during a visit to France as foreign minister to the United States that he had a clay replica made. He later used the model to design the capitol building of Virginia, his home state. The Arènes de Nîmes or the “Amphitheatre”

In Roman times the Arènes de Nîmes was one of the largest amphitheatres in Roman Gaul. It could hold up to 24,000 spectators spread over 34 rows of terraces. Divided into four separate areas, each section could be accessed through hundreds of galleries, stairwells and passages.

The amphitheatre was designed so there were no bottlenecks when spectators flooded in and everyone had unrestricted visibility of the entire arena. Several galleries and entrances were located beneath the arena so that animals and gladiators could access the arena during the Roman games.

After the time of the Roman Empire, Nîmes fell into the hands of the Visigoths, then the Muslims. When Pepin the Short, father of Charlemagne, captured the city in 752, the splendor that was Nîmes was pretty much in ruins. Local authorities had converted what remained of the amphitheatre into a makeshift town. The Tour Magne (Magne Tower) remains a prominent feature in the cityscape of Nîmes. Erected during the reign of Augustus in 1 BC, it is said to be the oldest surviving evidence of early Rome, built atop an earlier Celtic/Gallic tower from 15BC-14BC. The tallest structure for miles around, the Tour Magne was used as part of the stone fortification that surrounded the city.

Along with the Roman buildings that are still in use today, there are ruins of the early civilization in Nîmes that visitors can wander through or view. Porte Auguste and Porte de France are two of the gates from the ancient walled city. Remains of the Temple of Diana, with features similar to the Arc de Triomphe in Paris and the Arch of Constantine in Rome, are within the Jardin de la Fontaine. Nîmes blends the “new” with the “ancient”. A modern world among ancient Roman buildings. The Aréna, for example, is the area’s most popular venue for rock concerts and other musical events.

Roman era reenactments, with marching soldiers, gladiators and much pomp and ceremony, are staged in the Nîmes Aréna.  A number of bull fighting events and festivals of all sorts center around the Aréna, drawing huge crowds to the city. Your Walking Tour of Nîmes

The city of Nîmes that includes the once Roman colony is home to nearly 50,000 people of various nationalities and backgrounds. Downtown, the historic Roman monuments are within walking distance of each other. To reach Les Jardin de la Fontaine; however, you might want to hop on a local bus.

While at Les Jardin de la Fontaine, visit the Temple de Diane. If you like, climb to the highest levels of the gardens, up the terraced stairway. You will reach the park-like area of Mont Cavalier. From there, further up the hill, is the Tour Magne. It’s a hike to reach the tower, but it’s worth it if you want a bird’s eye view of the city. Take along plenty of water and, perhaps a snack, so that you can stop and enjoy the sights along the way.

• Park at any one of the downtown parking lots. Just follow the blue P signs. Some of the parking is outside and some in garages.

• Start your tour at the Maison Carrée. A  20-minute film runs every 30 minutes during tourist season. It’s excellent and it gives you an overview of the history of Nimes.You can buy combination tickets that give you admission to the film, the amphitheater and the Tour Magne.

• Walk to the Arèna (amphitheater). There are self-guided tours of the amphitheater with headphones and an audio presentation describing the days of gladiators. Stop along the way to the amphitheater, or afterwards, at any of the many cafes and restaurants for a more leisurely visit.

• Walk past the Porte d’Auguste to view a part of the fortification that protected the ancient city. It’s not a short walk from the amphitheater, but it’s on the way to your next stop.

• Les Jardin de la Fontaine is a “modern” part of Nîmes that has a rich Roman background. It was built in the eighteenth century atop the ruins of Roman thermal baths. You can stroll for hours in the garden enjoying the fountains, canals and seasonal plantings.

Tour Magne is your last stop. The tower is open for tourists (check the schedule) to wander through inside. A very narrow, spiral stairway leads to a viewing area where you can see the city of Nîmes from all angles.

Regardless of the time of year you visit Nîmes, there are historic sites to see, museums to browse through and, almost always, there’s a party going on. Previous Article Fun in the French Alps: Top Summer Events in Les Gets
Next Article Best Chinese Restaurants in Paris: Shang Palace at the Shangri-La