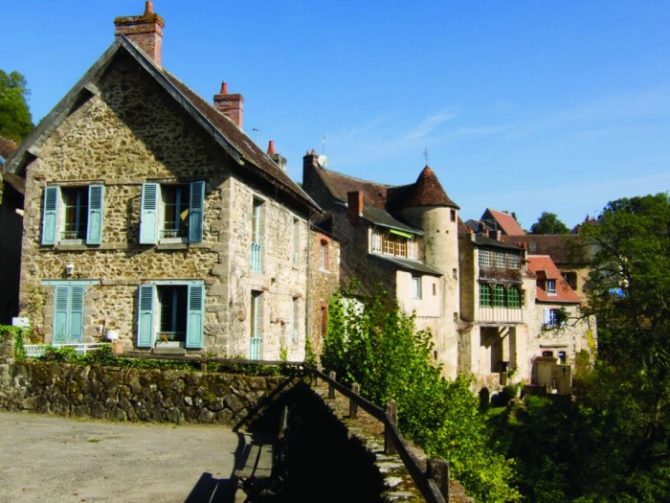 George Sand would doubtless have turned in her grave at the thought of her remains being transferred from her beloved Nohant to the Paris Panthéon. Paris-born in 1804 and given the name Aurore Dupin, she was raised at Nohant, in the old Berry province of what’s now the Centre region, by her grandmother, Aurore de Saxe. Sand spent the better part of her life at the country estate and died there in 1876, in the ‘Blue Room’ she had designed herself, facing the two cedars she had planted to mark the birth of her children, Maurice and Solange.

The outlandish idea of transfering Sand’s remains to Paris was put forth in 2004, the bicentenary of her birth. Fortunately, it didn’t take place, for she’s surely happier among her close family, in her tranquil haven, or as she put it, “mon pays natal” (“my native country”). Sand surely would have resented being used, post-mortem, by a self-serving political establishment she held in low esteem.

Nohant was purchased by Aurore de Saxe in 1793, to escape the ‘Reign of Terror’ in Paris. The illegitimate daughter of the great Maréchal and later Comte Maurice de Saxe (himself an illegitimate son of the King of Poland), and a cousin of Louis XVI, Aurore had already spent a year in prison, despite her Republican leanings, and had good reasons for concern. The house she bought, a bourgeois maison de maître, came with a vast estate, with farmland and woods, which secured  her welcome revenues in those uncertain times. Albeit now tenth its original size, Nohant is still large enough for a pleasurable stroll through the vegetable garden, orchard, rose garden and woods beyond. The little old church and rustic outbuildings, then part of the estate, now belong to the commune of Nohant-Vic.

For decades from the 1830s, Nohant was a place of literary, artistic and musical creativity. It was a phalanstery of sorts, where the great talents of the time were generously offered privacy and space, inclusive of ‘room service’ so to speak – witness the bells still hanging above the kitchen door which communicated with the guests’ respective rooms. At night they would gather at Nohant’s intimate and beautifully laid dining-table – we can still see it today, recreated by Sand’s granddaughter, Aurore Sand-Lauth. The table cards include those for Alexandre Dumas fils; Ivan Turgenev, Eugène Delacroix, who Sand offered a corset to use as a canvas; the opera singer Pauline Viardot; Gustave Flaubert, who read here the manuscript of L’Education Sentimentale before it was published; and of course, Frédéric Chopin.

Already ailing, Chopin composed two thirds of his oeuvre at the house over seven summers from 1839, during which he was affectionately mothered by Sand. Each summer she paid for the transportation of a fine piano that was generously loaned to Chopin by its maker, Camille Pleyel. The padded doors Sand had installed in the room where Chopin worked are still there. However, the chamber where he slept is gone, partitioned by Sand into her work space and library after their dramatic break-up – a way of eradicating him from her existence. She didn’t even attend his funeral in 1849. Paradoxically, he keeps drawing crowds to the house – he’s feted here every June and July with a piano festival.

In 1837, Franz Liszt preceded Chopin to Nohant, with Countess Marie d’Agoult, who had abandoned both husband and children for his sake and was soon to bear him a daughter, the future Cosima Wagner. The couple stayed in the room once occupied by Sand’s grandmother.

George Sand too played music, and also drew, sewed and gardened. The theatre she created still survives, as do the puppets made by her son, Maurice, for which she made the costumes. Sand’s plays, often recycled from her novels, were performed by locals and friends. A few even reached the prestigious stages of Paris.

Visiting Nohant reveals her exceptional and unconventional personality, prolific talents and interests, and boundless curiosity. In addition, despite her flaunted feminism, Nohant reflects Sand’s feminine qualities – witness her bottles of scent on display. She took a string of lovers – Jules Sandeau, for a start, from whom she derived her new surname after divorcing Casimir Dudevant, the father of her children. Sandeau was followed by the poet Alfred de Musset and the author of Carmen, Prosper Mérimée.

Sand’s final lover was the engraver Alexandre Manceau, some 13 years her junior when they met in 1849, and they remained inseparable for 14 years. In 1857 they found refuge from Nohant in the village of Gargilesse, in the dramatic Creuse Valley. Sand fell for and impulse-bought a two-room cottage, naming it Villa Algira after an African butterfly. Over the next five years she wrote the major portion of her work there.

In 1958 Aurore Sand-Lauth restored the place and filled it with family memorabilia, offering the public an additional insight into the life of her grandmother. Rising above the ravine of the river Gargilesse, alongside its château, the village deservedly enjoys its designation as a Plus Beau Village de France and is home to several artists. Sand admired its Romanesque church, in particular the crypt with its ravishing wall paintings.

Sand is also celebrated in the town of La Châtre, a few minutes’ drive from Nohant. The Musée George Sand et de la Vallée Noire is housed in the surviving keep of the city walls, which once served as a prison. It sheds further light on her life, personality and contemporary impact. The museum’s collection of stuffed birds has no direct connection to Sand but serves to remind us of her love of ornithology – which perhaps developed because her maternal grandfather was a bird-catcher on the quais of the Seine. One wonders whether Sand’s mixed social origins accounted for her most extraordinary life and personality.

Where to Eat and Stay

Previous Article My Life in Paris: Queen for a Day
Next Article La Fée Verte: The Revival of Absinthe