Périgueux: Exploring the Capital of the Dordogne 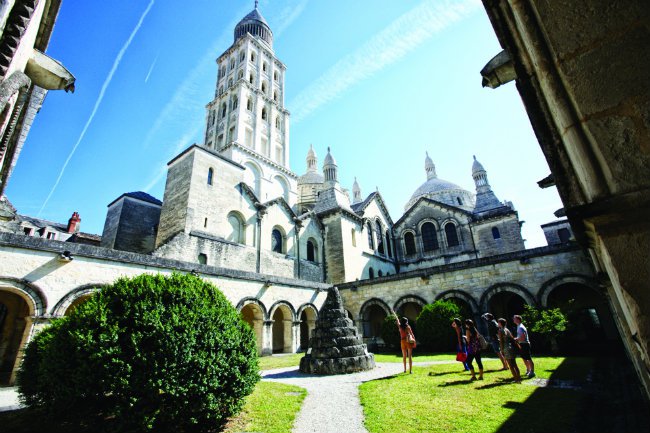 Saturday morning in high summer finds me meandering up from my hotel towards Périgueux’s most famous landmark, the imposing Cathédrale Saint-Front. The original church dates from the 8th century, though this imposing, multi-domed beauty, Aquitaine’s largest, was remastered at the end of the 19th century, using Venice’s Saint Mark’s Basilica as inspiration. I am, however, at that point distracted from the Cathedral’s charms by the unmistakeable sound of trumpets. It isn’t even 10.30am.

As I emerge into the rammed market on Place du Cautre, where succulent, shiny fruits and vegetables lay resplendent in their sun-kissed glory, the frenetic party music gets louder. Shuffling past a lady of a certain age who’s craftily squeezing a canteloupe for ripeness, I spot the front of a conga-line of musicians and other folk dressed rather strangely. From fifty paces, some look like honey bees, others resemble strawberries. Swept up by the energy, I make my way to the heart of the throng and stand next to a drummer. He’s leading the way. Is he the ‘Pied Drummer of Périgueux’ beating seven shades out of his skins with a fury matched only by the trumpeter behind him? People are jigging and clapping; kids are jumping around. They love it. I love it!

Suddenly, I’m stopped by a moustachioed policeman seemingly intent on killing my joy. But I’m not in trouble. This poker-faced joker is part of the set-up. Dressed like un flic à l’ancienne, he puts on his ‘angry’ face for a photo and lets me on my way. Next, I ask a man dressed as a fraise what the deal is. He tells me it’s the annual parade of local producers, an association called the Union des Confréries du Périgord. I’ve stumbled, erroneously and joyously, upon a ritual that represents France’s pride in its regional produce. The energy is palpable, both in the band’s musical vigour and in the delight with which this colourful collection of growers, creators, rearers, pickers and pluckers – of everything from honey to walnuts, truffles to strawberries and poultry to pâté – is celebrating. No wonder, because Périgueux, the capital of the Dordogne, offers history and charm in abundance. From the Place de l’Ancien Hôtel de Ville, all pristine pale stone and green and blue pastel shutters, you can amble along the side streets to the Place du Coderc, the home of the daily market. Off one corner is a quite lovely shopping street, the Rue Limogeanne, which runs from north to south, parallel to the town’s other main artery, the Rue Saint-Front. Be tempted by ice cream, leather bags, enormous tins of confit de canard and foie gras. All around is evidence of Périgueux’s grand standing, from its array of upmarket boutiques and snazzy grocery shops to elegant courtyards with hidden restaurants that are slowly filling up for lunch. Talking of which, my shady spot at Le Clin d’Oeil was quite a find – the restaurant offered great little tapas-style dishes, selected in a kind of pick and mix format, for lunchtime specials.

Périgueux is a clean, compact city blessed with green spaces. From outside the Cathedral, I head up Rue Saint-Front, cross the tree-lined car park onto the Allées de Tourny and enter a 19th-century quartier whose buildings were modelled on the Parisian designs of the time. Behind iron railings lie the perfectly coiffed front lawns of elegant townhouses and grandiose local government buildings. Turning up the Rue Paul-Louis Courier, I arrive at the Parc Gamenson. Formerly part of the episcopal palace that was bought by the town in 1912, it’s a tranquil hideaway planted with cypress, oak, cedar and chestnut trees, as well as magnolias and plenty of grassy picnic spots. In summer the natural bowl shape of one corner lends itself perfectly to concerts and stage plays en plein air. Next on my urban spaces list was the magnificent Jardin des Arènes, over in the Roman quartier. But first I had a rendezvous with the 360-degree panorama offered from the roof of the Tour Mataguerre, which surely has Périgueux’s best view. It’s free to visit and offers a great perspective on the different parts of town, from Roman to Medieval and Renaissance. (Pop into the tourist office next door for help with this or any other tour and visit.)

The 19th-century Jarden des Arènes is Périgueux’s green lung. Some 11,000 square metres in size and built on the site of an elliptical Roman amphitheatre, from which much stone was pilfered to construct the city itself. Strolling around, I give thanks that there are far fewer people enjoying the park’s benches, picnic areas and water features than the 20,000 for whom the amphitheatre was first built during the 1st century. After a quick coffee at L’Amphore, I spy more Roman goodies near by: the Tour de Vésone, named after a mythological Italian goddess of water and once the heart of a sacred temple. But Périgueux’s pièce de résistance is next door to this hollow, 25-metre tower: the Musée Vesunna. Designed by French architect Jean Nouvel and opened in 2003, this popular museum brilliantly showcases the extensive remains of a Gallo-Roman domus (townhouse). But what lies within the building is the real star of the show: framed by a high, brightly coloured ceiling, Vesunna’s a light-filled glass enclosure with raised wooden walkways that allow visitors to appreciate the expanse of the living quarters, while frescoes draw the attention closer. A revealing video, intricate models, explanatory panels and exhibits of found objets give further insight into the life of Gallo-Romans.

In presenting the town’s Roman origins, the Vesunna is the perfect place to round off any visit to Périgueux, which proves itself to be a splendid short-break destination that’s packed with historical intrigue, great restaurants, civilised shopping opportunities and all the aesthetic elegance of a classy French préfecture. Plus, of course, it has trumpets on a Saturday morning!

For more information, visit the websites for the Offices of Tourism: www.tourisme-perigueux.fr/en & www.dordogne-perigord-tourisme.fr

Fly in to Bergerac airport (one hour’s drive from Perigueux). There are flights from Paris and Nice or from the UK via Ryanair and Flybe.

Take the train from Paris Austerlitz via Limoges of from Montparnasse via Libourne. Journey times range from 3.5 hours to 4.5 hours.

Affordable: The excellent, newly-refurbished three-star Hotel Ibis Perigueux Centre is a five-minute walk from the Cathedral.

Luxury: The beautiful Chateau de Lalande is about 12 kms from Perigueux. 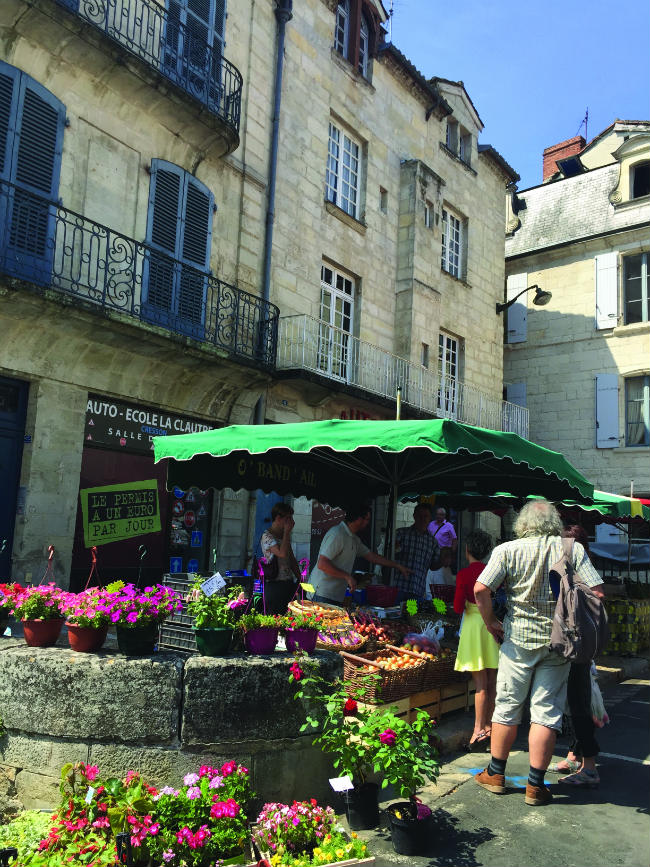 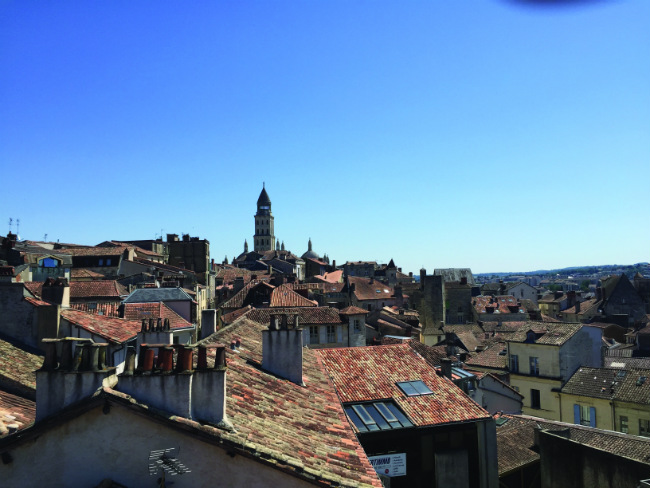 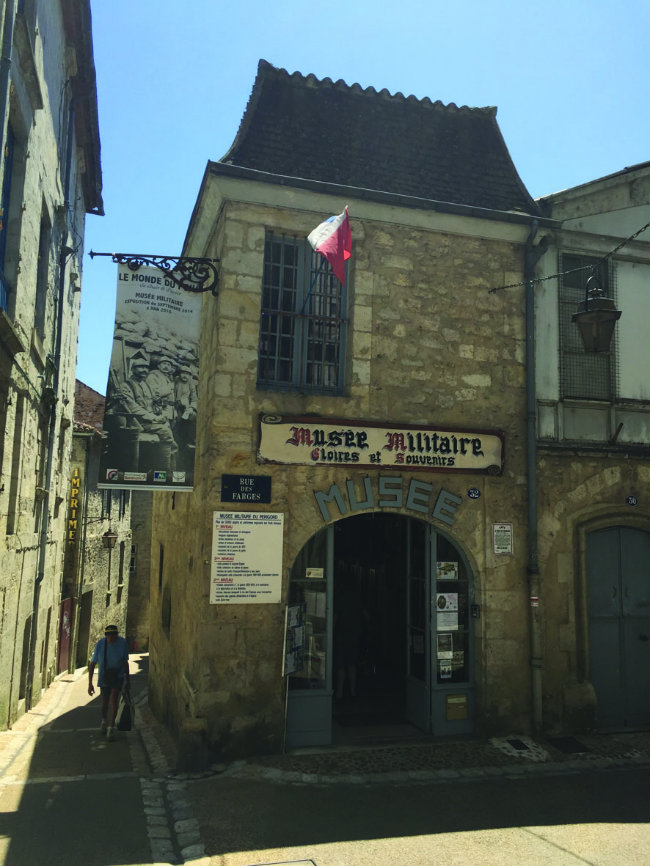 Previous Article Evenings Out in Paris: Thomas Dutronc at the Casino de Paris
Next Article Paris Shopping: A Stylish Taste of Provence at Rose et Marius