Rock on into the Wilds of the Mercantour Park

The Vallée des Merveilles, with its stark beauty, prehistoric rock carvings and welcoming hostelries, is the perfect spot to get away from it all. Lanie Goodman pulls on her hiking boots

Think of it like this: you wake up at home, at dawn, on a mid-August morning in a haze of silvery heat. Your electric fan is valiantly stirring the sticky air, but you’re drenched in sweat. And forget any hope of a cool sea breeze, not even on your terrace. The outdoor thermometer reads 31°C in the shade. You gulp down your coffee, gazing out at the Mediterranean, lace up your battered Nikes and grab your knapsack, hat and sun cream. It’s time to head for the hills.

A 90-minute drive later, having snaked up the winding roads along the Vésubie River, you arrive at the village of Belvédère and take the narrow tree-shaded path to La Gordolasque, the set-off point for a three-hour climb up the mountain in La Vallée des Merveilles (the Valley of Marvels). And by 11am, you are up in the clouds, smiling with beatitude and, yes, shivering, with every layer of clothes you brought zipped snugly and a scarf knotted around your neck.

You can strike out on your own or join a guided walk. Photo credit © Vincent Jaques, Drone de Regard

You have arrived at the top of the mountain, at last, and the terrain has finally flattened out. Stepping gingerly across the piles of windblown rocks, you catch your breath for a moment by the banks of a lake called Lac de la Fous, a glacial mirror of shimmering water surrounded by craggy boulders. The deserted, almost otherworldly landscape is nothing less than sublime and you thank your lucky stars that in the height of summer, you can escape to this heavenly spot, 2,232m above sea level. The climb is a steady uphill challenge for a beginner like me. For the first hour and a half, you are rewarded with a stunning variety of wild flowers in the most arresting shades of blue, purple and yellow (I can’t help noticing that my childhood Crayola favourite colour, periwinkle, seems to predominate). And then, there are the wild raspberry bushes, which are not supposed to be picked, but everyone seems to be grabbing a handful now and then as they trudge up the steep incline.

My hiking buddy Gilles suddenly grabs my elbow. “Do you hear them?” he says in a hoarse whisper. “Don’t move.” A high-pitched whistle. There’s something brownish behind the windblown rocks and scrub. Two marmots, happily trilling away. We sit and rest for a while and it isn’t long before we’re rewarded with the sight of a pair of chamois, who prance past us, grazing placidly the hillside. I feel like I’ve walked into a Disney cartoon.

The Vallée des Merveilles has become popular with visitors craving a slice of the great outdoors. Photo credit © Drone de Regard

“No energy bar now,” Gilles admonishes, watching me dig through my knapsack. He’s a hard-core trekker and knows the terrain extremely well. I settle for a long slug of water and we continue. An hour later, all signs of greenery vanish, replaced by a stark lunar landscape of granite slabs.

Keeping my eyes on where I’m walking (proper hiking boots are definitely de rigueur here), I finally dare to look up. Off in the distance is the slate grey enchanted lake with mist rising from the banks, and just above, at the top of the mountain, a wooden cabin, a welcome of glimpse of civilisation. We climb the long wooden stairway to the Refuge de Nice, a dormitory-style wooden gîte for trekkers where you can have dinner and spend the night – that is, if you’ve come equipped with a sleeping bag (and a change of warm clothes) in your knapsack.

The area is home to a number of stunning lakes, such as Lac des Grenouilles. Photo credit © Vincent Jacques

However, that doesn’t mean you have to rough it. Figuring that we’d want to hang around after the hike, we’d reserved a modest room (with a private bathroom, s’il vous plaît) at the friendly country inn, the Refuge de la Gordolasque, down in the valley. It’s a favourite haven for hikers (some rooms offer bunk beds for groups) but is also a popular local haunt, known for its tasty traditional dishes, including beef stew (daube niçoise) with polenta and homemade wild cèpe ravioli.

To fuel up for our three-hour descent, we order coffee and a big slice of mountain blueberry pie and take it outside to the Refuge terrace overlooking the lake. A few chickens peck at the gravel next to us. “They must belong to the caretaker of the gîte who lives here full-time,” I tell Gilles. “For his egg supply,” he says, nodding. The majestic stillness is broken by the sudden arrival of a group of bronzed Lycra-clad hikers brandishing steel walking sticks. “Let’s go,” I say, rising. My legs would be sore in the morning but never mind. Plus, I could hardly wait until nightfall: not only it was shooting star season, but we’d get to see the sparkling swathe of the Milky Way.

One of the prehistoric cave engraving. Photo credit © Drone de Regard

On the easternmost side of the Mercantour is the Roya Valley, another entrance to the Vallée des Merveilles, where you drive past pretty Baroque towns with onion dome churches, like the pastel stacked village of Saorge, or Fontanalbe and Casterino. This second hike, a few weeks later, was to catch a glimpse of the prehistoric engravings I’d heard so much about.

Known as the Voie Sacrée, it’s a kind of open-air museum of rock art modelled by glaciers that disappeared 10,000 years ago. You can reserve a spot on a guided tour that takes you all the way up to the foot of Mont Bégo, but we’ve opted for the shorter escapade. Our guide, Hélène, is a lithe young woman with a ponytail who is scrambling up the trail, and I somehow manage (panting for breath) to keep up with her. “There are over 40,500 engravings, divided between the Vallée des Merveilles and the Valley of Fontanalbe, with nearly 40,000 different signs,” she tells us. “It looks like a Miró,” Gilles comments, squinting at the emblematic face of a Neolithic hunter from 2500 BC on the rock – a few faint horizontal lines with his hands stretched to the sky. That’s just the beginning: there are all sort of animals, flora, figurative axes and swords from the Bronze Age, plus a smattering of human figures.

The Vallée des Merveilles has become popular with visitors craving a slice of the great outdoors. Photo © Vincent Jaques, Drone de Regard

Mercantour, created in August 1979, is an impressive example of biodiversity, with 2,000 species of plants, 550km of hiking trails, and 60 types of mammals, including wolves, and 150 different kinds of birds. “Camping is not allowed in Rock Art zones,” Hélène says sternly to the group. “No hunting either.”

At the end of the walk, we come upon another gîte, the recently inaugurated Refuge Fontanalbe, which turns out to be a relatively easy hike, even for kids.

“I’ll be back,” I promised Hélène. That was August 2019. Last year, of course, was different. Yet, even though travel plans were disrupted by Covid-19 restrictions, the Mercantour continued to attract a large number of visitors who longed for a back-to-nature jaunt in wide open spaces. 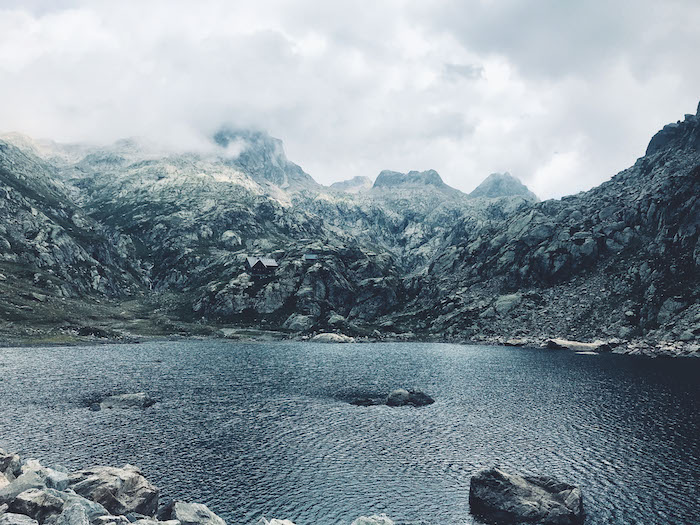 Eye of the Storm

On September 30, 2020, the violent storm Alex raged through the Vésubie and Roya Valley for three full days, causing disastrous flooding and a tragic outcome for many homeowners who lost everything. Lives were lost, houses were washed away, bridges were smashed and power cuts lingered on after the storm had passed.

I spoke to Paul Burro, Mayor of Belvédère and administrator of the Mercantour National Park, to find out how the region is reconstructing itself, little by little. “We were very lucky that none of our hiking trails or gîtes were affected by the storm,” Burro says. The mud and gravel is being cleared, the roads repaired. “By the early spring, tourists will be able to return and take advantage of the incredible beauty of this region.” 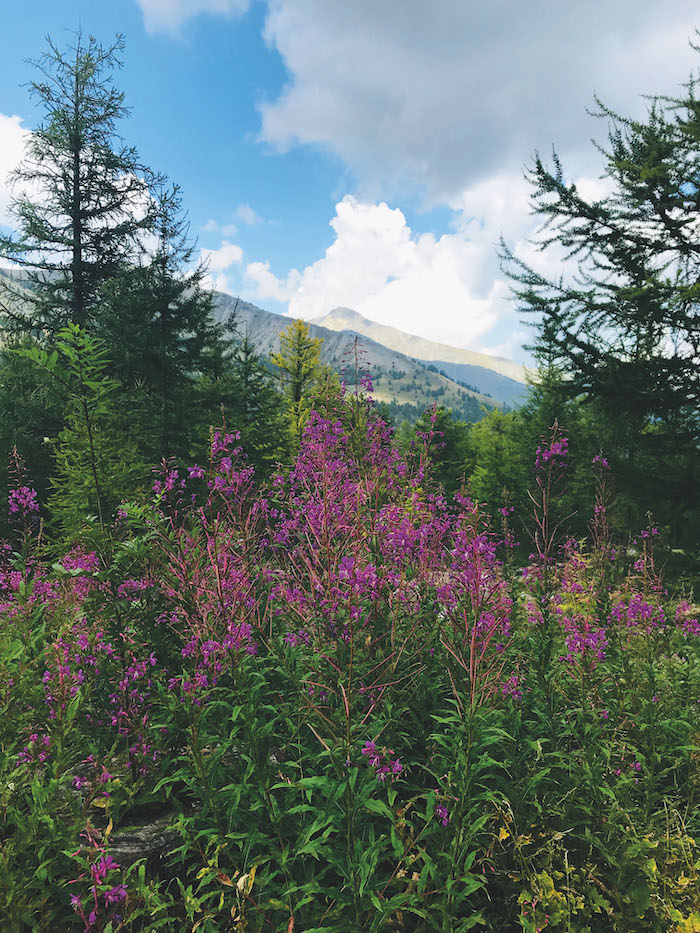 The area has an abundance of flora. Photo credit © Lanie Goodman

However, the neighbouring medieval hilltop village, Saint-Martin-de Vésubie was not as fortunate. “It was awful the first few days,” says British wine writer Elizabeth Gabay, a long-time village resident. “We had no drinking water, no electricity and the helicopters had to deliver staples until the roads were fixed.” But what Gabay learned from the tragedy, she says, was the incredible feeling of community solidarity that has brought the villagers together.

“Everyone immediately brought out their remaining food from the fridge and shared it.” She explains how one local traiteur (fine food take-out), Sylvain Laurentia, began cooking outside in the big square, dishing up salade niçoise and merguez to rescue workers and anyone else who wanted lunch. “People came from everywhere to help out. There were 30 top chefs from the Var that sent us 3,000 meals – lovely dishes like pasta chicken with sundried tomatoes or salmon and risotto.”

What will happen by this summer? “We’re working together with a group of people to recreate eco-tourism on a luxury level and move the village forward,” says Gabay. “One example is happening right beside my house – they’re constructing beautiful five-star chalets on the hillside,” she adds. “We’re hoping people will toss out their old guide books and come to rediscover the Mercantour.” Count me in. 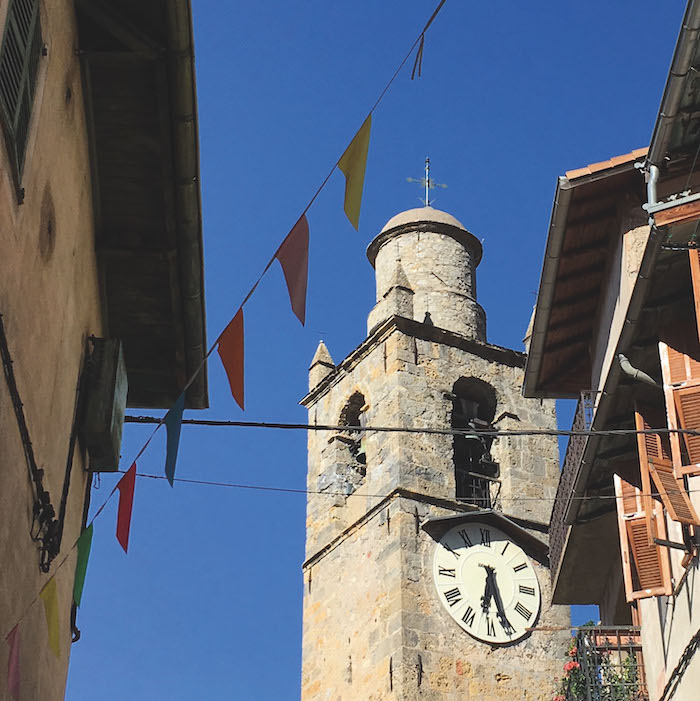 The pretty village of Belvédère is worth a visit. Photo credit © Lainie Goodman 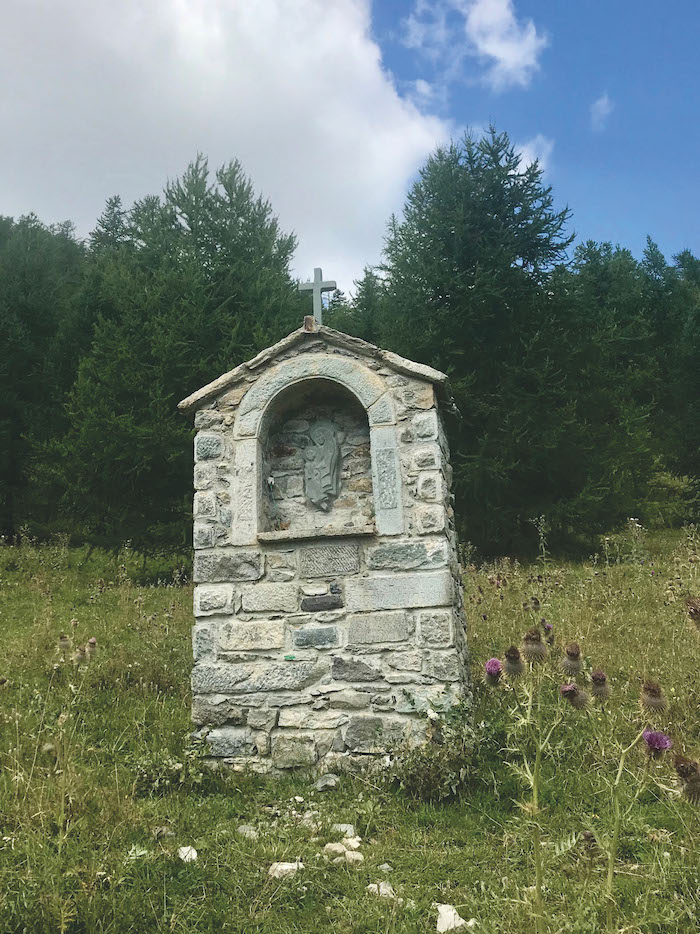 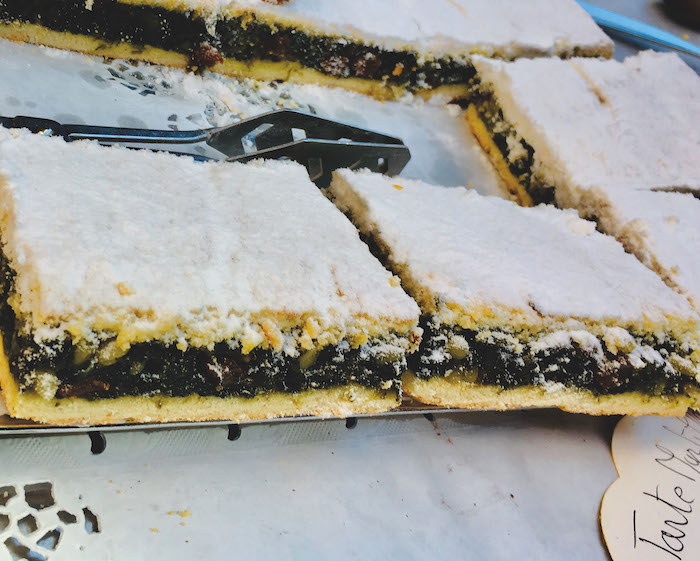 There are several places along the way to rest and refuel with treats such as Swiss chard pie. Photo credit © Lanie Goodman